Click Here for Items Related To - Tourism in Algeria


in Setif Algeria is the largest country in Africa; one of the main tourist attractions is the Sahara, the second largest desert in the world. Algeria has been a member of the World Tourism Organization since 1976. According to a report of the World Tourism Organization published in 2014, Algeria was the 4th largest tourist destination in Africa in 2013 with 2,7 million foreign tourists, and ranks 111th on the international tourism scene, according to the London-based World Tourism and Travel Council (WTTC). The tourism sector in Algeria accounts for 3.9% of the volume of exports, 9.5% of the productive investment rate and 8.1% of the Gross Domestic Product. The main competitors are other Mediterranean countries, the majority of which have developed a strong tourism-based economy. The tourism sector is still underdeveloped in Algeria concerning accommodation and other services. For this reason, the government launched a strategic plan to boost this sector by 2025. According to the U.S. News & World Report, Algeria is ranked among the top 80 countries in the world in 2018. In its Best Countries, Ranking published each year, the weekly draws up a ranking based on several criteria such as business, citizenship, cultural influence, heritage, quality of life or the possibility of adventures. The US national newspaper USA Today, has ranked Constantine among the eleven cities to visit the world in 2018. The newspaper was based on the experience of Sal Lavallo, one of the youngest people to have visited all 193 member states of the United Nations.

A project developed during the "National and International Conference of Tourism" was born providing a new dynamics of reception and management of tourism in Algeria. This project is called (Horizon 2025). Foreign investors, mainly French, position themselves to dominate the market, focused mainly on a business clientele. A first advertising campaign devoted to the industry was carried out to attract investors as well as foreign customers, as well as concrete measures such as conferences, trade shows or commissions. The international footballer Zinedine Zidane of Algerian descent was also used for a new commercial carried out this time under the aegis of the telephony operator, Ooredoo Algeria, intended for an individual clientele. A Quality Tourism Plan Algeria was adopted by the government but by the end of 2010, only 10% of tourist structures in Algeria have joined this program. Investors remain interested in the potential of the country, as well as the high authorities, as the representative of the Secretary-General of the World Tourism Organization (WTO), Frédéric Perret, told the conference of the International Tourism and Travel Exhibition held In Algeria in 2010, that the Algerian tourism sector has great potential thanks to its "Mediterranean beaches, its fascinating Djurdjura National Park, its human, cultural and historical treasures." As part of the tourism development policy, 'Eductour' is regularly organized for the national and international.

Algeria is home to seven UNESCO World Heritage Sites. Religion in Algeria is dominated by Muslims at about ninety-nine percent of the population. The vast majority of Muslims in Algeria adhere to Sunni Islam of Maliki school of jurisprudence. There are also almost 100,000 Christians, mostly Pentecostal Protestants. There are nearly 2,000 Jews still living in Algeria, according to the US department of State. This is a list of the most famous mosques and churches in Algeria:

Djamaâ El Djazaïr (Mosque of Algeria, in Arabic: جامع الجزائر); or Great Mosque of Algeria (in Arabic: مسجد الجزائر الأعظم) Is a mosque in the process of completion, located in Mohammedia in Algiers. Is the largest mosque in Algeria and Africa and the third largest mosque in the world in terms of the total area after each of Great Mosque of Mecca in Mecca and Al-Masjid an-Nabawi Mosque in Medina.

Ketchaoua Mosque is a mosque in Algiers, the capital of Algeria. It is located at the foot of the Casbah, which was built during the Ottoman rule in the 17th century, which is a UNESCO World Heritage Site. The mosque that stands on the first of the Casbah's many steep stairways, was logistically and symbolically the cynosure of the pre-colonial city of Algiers. The mosque is noted for its unique fusion of Moorish and Byzantine architecture. 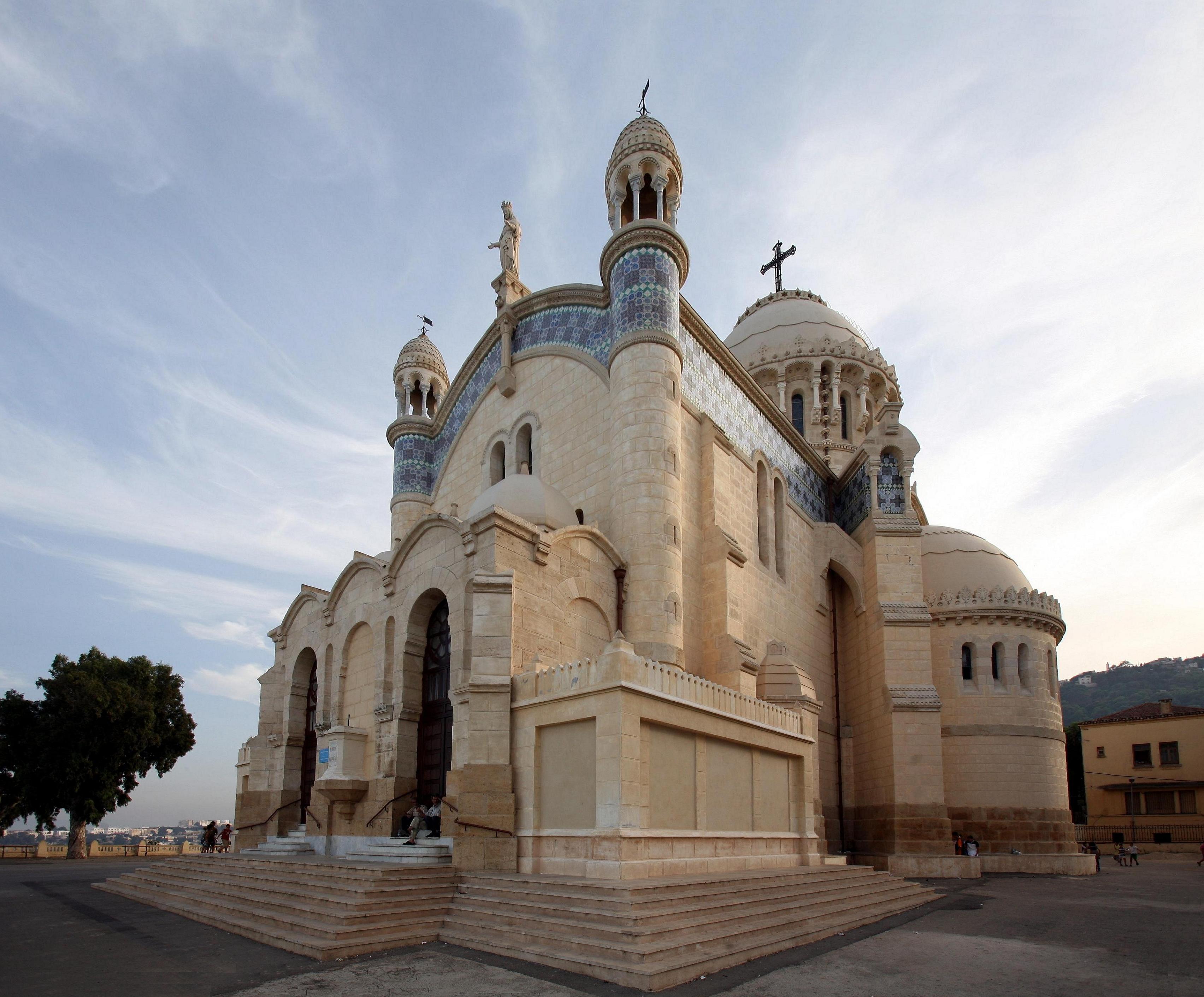 Notre-Dame d'Afrique (Our Lady of Africa) is a Roman Catholic basilica in Algiers, It was Louis-Antoine-Augustin Pavy, who served as the Bishop of Algiers from 1846 to 1866, who paved the way for its construction. The basilica was inaugurated in 1872, after fourteen years of construction. It was founded by Charles Lavigerie. Its architect, Jean-Eugène Fromageau, who had been appointed the chief architect for ecclesiastical buildings in French Algeria in 1859, employed a Neo-Byzantine style. Its floor plan is unusual as the choir is situated on the southeast instead of the usual east side of the building.

1st November of 1954 Great Mosque is considered to be the largest mosque in Algeria and the second in Africa It is located in the town of Batna. This imposing religious building has been open to the faithful since 2003 and is one of the great architectural achievements of the city.

The Basilique Saint Augustin (Basilica of St Augustine) is a Roman Catholic basilica and Pro-cathedral dedicated to Saint Augustine of Hippo located in Annaba, Algeria. The basilica is under the circumscription of the Diocese of Constantine. Construction of the basilica began in 1881 and finished on March 29, 1900, though the church was not dedicated until April 24, 1914. The statue of St. Augustine in the basilica contains one of his arm bones. It was built not far from the remains of the Basilica Pacis built by Saint Augustine, where he died while the city was besieged by Vandals.

Djama'a al-Djedid, also referred to as the Jamaa al-Jadid, Jamaa El Jedid, or the New Mosque,