The Three Gorges Dam is a hydroelectric gravity dam that spans the Yangtze River by the town of Sandouping, in Yiling District, Yichang, Hubei province, central China, downstream of the Three Gorges. The Three Gorges Dam has been the world's largest power station in terms of installed capacity (22,500 MW) since 2012. The dam generates an average 95±20 TWh of electricity per year, depending on annual amount of precipitation in the river basin. After the extensive monsoon rainfalls of 2020, the dam's annual production reached ~112 TWh, breaking the previous world record of ~103 TWh set by Itaipu Dam in 2016. The dam body was completed in 2006. The power plant of the dam project was completed and fully functional as of July 4, 2012, when the last of the main water turbines in the underground plant began production. Each main water turbine has a capacity of 700 MW. Coupling the dam's 32 main turbines with two smaller generators (50 MW each) to power the plant itself, the total electric generating capacity of the dam is 22,500 MW. The last major component of the project, the ship lift, was completed in December 2015. As well as producing electricity, the dam is intended to increase the Yangtze River's shipping capacity. By providing flood storage space, the dam reduces the potential for floods downstream which could possibly affect millions. China regards the project as a monumental social and economical success, with the design of state-of-the-art large turbines, and a move toward limiting greenhouse gas emissions. However, the dam flooded archaeological and cultural sites, displaced some 1.3 million people, and had caused significant ecological changes including an increased risk of landslides. Because of that, the dam has been controversial both domestically and abroad.

thumb|left|Map of the location of the Three Gorges Dam and the most important cities along the Yangtze River A large dam across the Yangtze River was originally envisioned by Sun Yat-sen in ''The International Development of China'', in 1919. He stated that a dam capable of generating 30 million horsepower (22 GW) was possible downstream of the Three Gorges. In 1932, the Nationalist government, led by Chiang Kai-shek, began preliminary work on plans in the Three Gorges. In 1939, during the Second Sino-Japanese War, Japanese military forces occupied Yichang and surveyed the area. A design, the Otani plan, was completed for the dam in anticipation of a Japanese victory over China. In 1944, the United States Bureau of Reclamation's head design engineer, John L. Savage, surveyed the area and drew up a dam proposal for the 'Yangtze River Project'. Some 54 Chinese engineers went to the U.S. for training. The original plans called for the dam to employ a unique method for moving ships: the ships would enter locks located at the lower and upper ends of the dam and then cranes would move the ships from one lock to the next. Groups of craft would be lifted together for efficiency. It is not known whether this solution was considered for its water-saving performance or because the engineers thought the difference in height between the river above and below the dam too great for alternative methods. Some exploration, survey, economic study, and design work was done, but the government, in the midst of the Chinese Civil War, halted work in 1947. After the 1949 Communist Revolution, Mao Zedong supported the project, but began the Gezhouba Dam project nearby first, and economic problems including the Great Leap Forward and the Cultural Revolution slowed progress. After the 1954 Yangtze River Floods, in 1956, Mao Zedong authored "Swimming", a poem about his fascination with a dam on the Yangtze River. In 1958, after the Hundred Flowers Campaign, some engineers who spoke out against the project were imprisoned. During the 1980s, the idea of a dam reemerged. The National People's Congress approved the dam in 1992: out of 2,633 delegates, 1,767 voted in favour, 177 voted against, 664 abstained, and 25 members did not vote, giving the legislation an unusually low 67.75% approval rate. Construction started on December 14, 1994. The dam was expected to be fully operational in 2009, but additional projects, such as the underground power plant with six additional generators, delayed full operation until May 2012. The ship lift was completed in 2015. The dam had raised the water level in the reservoir to above sea level by the end of 2008 and the designed maximum level of by October 2010.

Made of concrete and steel, the dam is long and the top of the dam is above sea level. The project used of concrete (mainly for the dam wall), used 463,000 tonnes of steel (enough to build 63 Eiffel Towers), and moved about of earth. The concrete dam wall is high above the rock basis. When the water level is at its maximum of above sea level, higher than the river level downstream, the dam reservoir is on average about in length and in width. It contains of water and has a total surface area of . On completion, the reservoir flooded a total area of of land, compared to the of reservoir created by the Itaipu Dam.

The government estimated that the Three Gorges Dam project would cost 180 billion yuan (US$22.5 billion). By the end of 2008, spending had reached 148.365 billion yuan, among which 64.613 billion yuan was spent on construction, 68.557 billion yuan on relocating affected residents, and 15.195 billion yuan on financing. It was estimated in 2009 that the construction cost would be recovered when the dam had generated of electricity, yielding 250 billion yuan. Full cost recovery was thus expected to occur ten years after the dam started full operation, but the full cost of the Three Gorges Dam was recovered by December 20, 2013. Funding sources include the Three Gorges Dam Construction Fund, profits from the Gezhouba Dam, loans from the China Development Bank, loans from domestic and foreign commercial banks, corporate bonds, and revenue from both before and after the dam is fully operational. Additional charges were assessed as follows: Every province receiving power from the Three Gorges Dam had to pay ¥7.00 per MWh extra. Other provinces had to pay an additional charge of ¥4.00 per MWh. The Tibet Autonomous Region pays no surcharge.

Power generation is managed by China Yangtze Power, a listed subsidiary of China Three Gorges Corporation (CTGC)—a Central Enterprise SOE administered by SASAC. The Three Gorges Dam is the world's largest capacity hydroelectric power station with 34 generators: 32 main generators, each with a capacity of 700 MW, and two plant power generators, each with capacity of 50 MW, making a total capacity of 22,500 MW. Among those 32 main generators, 14 are installed in the north side of the dam, 12 in the south side, and the remaining six in the underground power plant in the mountain south of the dam. Annual electricity generation in 2018 was 101.6 TWh, which is 20 times more than the Hoover Dam.

The main generators weigh about 6,000 tonnes each and are designed to produce more than 700 MW of power. The designed hydraulic head of the generator is . The flow rate varies between depending on the head available. The greater the head, the less water needed to reach full power. Three Gorges uses Francis turbines. The turbine diameter is 9.7/10.4 m (VGS design/Alstom's design) and the rotation speed is 75 revolutions per minute. This means that in order to generate power at 50 Hz, the generator rotors have 80 poles. Rated power is 778 MVA, with a maximum of 840 MVA and a power factor of 0.9. The generator produces electrical power at 20 kV. The electricity generated is then stepped-up to 500 kV for transmission at 50 Hz. The outer diameter of the generator stator is 21.4/20.9 m. The inner diameter is 18.5/18.8 m. The stator, the biggest of its kind, is 3.1/3 m in height. Bearing load is 5050/5500 tonnes. Average efficiency is over 94%, and reaches 96.5%. 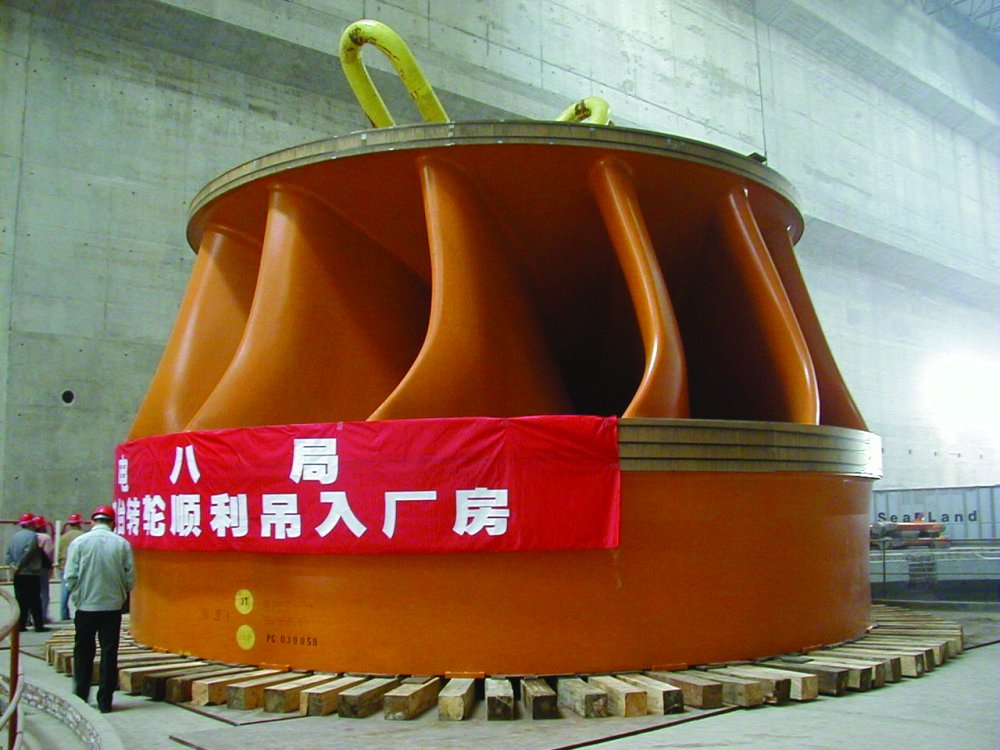 The generators were manufactured by two joint ventures: one of them Alstom, ABB Group, Kvaerner, and the Chinese company Harbin Motor; the other Voith, General Electric, Siemens (abbreviated as VGS), and the Chinese company Oriental Motor. The technology transfer agreement was signed together with the contract. Most of the generators are water-cooled. Some newer ones are air-cooled, which are simpler in design and manufacture and are easier to maintain. 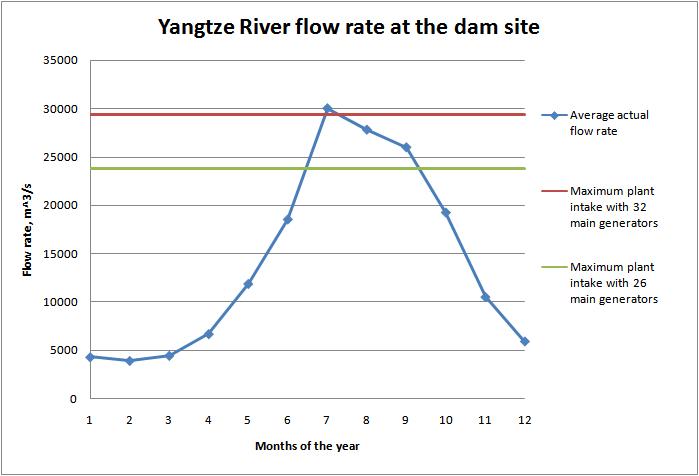 By August 16, 2011, the plant had generated 500 TWh of electricity. In July 2008 it generated 10.3 TWh of electricity, its first month over 10 TWh. On June 30, 2009, after the river flow rate increased to over 24,000 m3/s, all 28 generators were switched on, producing only 16,100 MW because the head available during flood season is insufficient. During an August 2009 flood, the plant first reached its maximum output for a short period. During the November to May dry season, power output is limited by the river's flow rate, as seen in the diagrams on the right. When there is enough flow, power output is limited by plant generating capacity. The maximum power-output curves were calculated based on the average flow rate at the dam site, assuming the water level is 175 m and the plant gross efficiency is 90.15%. The actual power output in 2008 was obtained based on the monthly electricity sent to the grid. The Three Gorges Dam reached its design-maximum reservoir water level of for the first time on October 26, 2010, in which the intended annual power-generation capacity of 84.7 TWh was realized. It has a combined generating capacity of 22.5 gigawatts and a designed annual generation capacity of 88.2 billion kilowatt hours. In 2012, the dam's 32 generating units generated a record 98.1 TWh of electricity, which accounts for 14% of China's total hydro generation. Between 2010 (first design-maximum reservoir water level) and 2019, the dam generated an average of 92 TWh of electricity per year, just second to Itaipu dam average of 92.8 TWh of electricity per year during the same period. Due to extensive monsoon of 2020 year with heavy rainfalls, the annual production reached ~112 TWh that year, which broke the previous world record of annual production by Itaipu Dam equal to ~103 TWh of 2016 year.