Termites are eusocial insects that are classified at the taxonomic rank of infraorder Isoptera, or as epifamily Termitoidae within the order Blattodea (along with cockroaches). Termites were once classified in a separate order from cockroaches, but recent phylogenetic studies indicate that they evolved from cockroaches, as they are the sister group to wood eating cockroaches of the genus ''Cryptocercus''. Previous estimates suggested the divergence took place during the Jurassic or Triassic. More recent estimates suggest they have an origin during the Late Jurassic, with the first fossil records in the Early Cretaceous. About 3,106 species are currently described, with a few hundred more left to be described. Although these insects are often called "white ants", they are not ants, and are not closely related to ants. Like ants and some bees and wasps from the separate order Hymenoptera, termites divide as "workers" and "soldiers" that are usually sterile. All colonies have fertile males called "kings" and one or more fertile females called "queens". Termites mostly feed on dead plant material and cellulose, generally in the form of wood, leaf litter, soil, or animal dung. Termites are major detritivores, particularly in the subtropical and tropical regions, and their recycling of wood and plant matter is of considerable ecological importance. Termites are among the most successful groups of insects on Earth, colonising most landmasses except Antarctica. Their colonies range in size from a few hundred individuals to enormous societies with several million individuals. Termite queens have the longest known lifespan of any insect, with some queens reportedly living up to 30 to 50 years. Unlike ants, which undergo a complete metamorphosis, each individual termite goes through an incomplete metamorphosis that proceeds through egg, nymph, and adult stages. Colonies are described as superorganisms because the termites form part of a self-regulating entity: the colony itself. Termites are a delicacy in the diet of some human cultures and are used in many traditional medicines. Several hundred species are economically significant as pests that can cause serious damage to buildings, crops, or plantation forests. Some species, such as the West Indian drywood termite (''Cryptotermes brevis''), are regarded as invasive species.

The infraorder name Isoptera is derived from the Greek words ''iso'' (equal) and ''ptera'' (winged), which refers to the nearly equal size of the fore and hind wings. "Termite" derives from the Latin and Late Latin word ''termes'' ("woodworm, white ant"), altered by the influence of Latin ''terere'' ("to rub, wear, erode") from the earlier word ''tarmes''. A termite nest is also known as a ''termitary'' or ''termitarium'' (plural ''termitaria'' or ''termitariums''). In earlier English, termites were known as "wood ants" or "white ants". The modern term was first used in 1781. 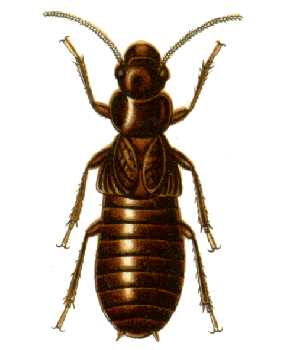 Termites were formerly placed in the order Isoptera. As early as 1934 suggestions were made that they were closely related to wood-eating cockroaches (genus ''Cryptocercus'', the woodroach) based on the similarity of their symbiotic gut flagellates. In the 1960s additional evidence supporting that hypothesis emerged when F. A. McKittrick noted similar morphological characteristics between some termites and ''Cryptocercus'' nymphs. In 2008 DNA analysis from 16S rRNA sequences supported the position of termites being nested within the evolutionary tree containing the order Blattodea, which included the cockroaches. The cockroach genus ''Cryptocercus'' shares the strongest phylogenetical similarity with termites and is considered to be a sister-group to termites. Termites and ''Cryptocercus'' share similar morphological and social features: for example, most cockroaches do not exhibit social characteristics, but ''Cryptocercus'' takes care of its young and exhibits other social behaviour such as trophallaxis and allogrooming. Termites are thought to be the descendants of the genus ''Cryptocercus''. Some researchers have suggested a more conservative measure of retaining the termites as the Termitoidae, an epifamily within the cockroach order, which preserves the classification of termites at family level and below. Termites have long been accepted to be closely related to cockroaches and mantids, and they are classified in the same superorder (Dictyoptera). The oldest unambiguous termite fossils date to the early Cretaceous, but given the diversity of Cretaceous termites and early fossil records showing mutualism between microorganisms and these insects, they possibly originated earlier in the Jurassic or Triassic. Possible evidence of a Jurassic origin is the assumption that the extinct ''Fruitafossor'' consumed termites, judging from its morphological similarity to modern termite-eating mammals. The oldest termite nest discovered is believed to be from the Upper Cretaceous in West Texas, where the oldest known faecal pellets were also discovered. Claims that termites emerged earlier have faced controversy. For example, F. M. Weesner indicated that the Mastotermitidae termites may go back to the Late Permian, 251 million years ago, and fossil wings that have a close resemblance to the wings of ''Mastotermes'' of the Mastotermitidae, the most primitive living termite, have been discovered in the Permian layers in Kansas. It is even possible that the first termites emerged during the Carboniferous. The folded wings of the fossil wood roach ''Pycnoblattina'', arranged in a convex pattern between segments 1a and 2a, resemble those seen in ''Mastotermes'', the only living insect with the same pattern. Krishna ''et al.'', though, consider that all of the Paleozoic and Triassic insects tentatively classified as termites are in fact unrelated to termites and should be excluded from the Isoptera. Other studies suggest that the origin of termites is more recent, having diverged from ''Cryptocercus'' sometime during the Early Cretaceous.

The primitive giant northern termite (''Mastotermes darwiniensis'') exhibits numerous cockroach-like characteristics that are not shared with other termites, such as laying its eggs in rafts and having anal lobes on the wings. It has been proposed that the Isoptera and Cryptocercidae be grouped in the clade "Xylophagodea". Termites are sometimes called "white ants" but the only resemblance to the ants is due to their sociality which is due to convergent evolution with termites being the first social insects to evolve a caste system more than 100 million years ago. Termite genomes are generally relatively large compared to that of other insects; the first fully sequenced termite genome, of ''Zootermopsis nevadensis'', which was published in the journal Nature Communications, consists of roughly 500Mb, while two subsequently published genomes, ''Macrotermes natalensis'' and ''Cryptotermes secundus'', are considerably larger at around 1.3Gb. External phylogeny Internal phylogeny As of 2013, about 3,106 living and fossil termite species are recognised, classified in 12 families; reproductive and/or soldier castes are usually required for identification. The infraorder Isoptera is divided into the following clade and family groups, showing the subfamilies in their respective classification:

Termites are found on all continents except Antarctica. The diversity of termite species is low in North America and Europe (10 species known in Europe and 50 in North America), but is high in South America, where over 400 species are known. Of the 3,000 termite species currently classified, 1,000 are found in Africa, where mounds are extremely abundant in certain regions. Approximately 1.1 million active termite mounds can be found in the northern Kruger National Park alone. In Asia, there are 435 species of termites, which are mainly distributed in China. Within China, termite species are restricted to mild tropical and subtropical habitats south of the Yangtze River.