A point-to-point link is a dedicated link that connects exactly two communication facilities (e.g., two nodes of a network, an intercom station at an entryway with a single internal intercom station, a radio path between two points, etc.).

Broadcast links connect two or more nodes and support ''broadcast transmission'', where one node can transmit so that all other nodes can receive the same transmission. Classic Ethernet is an example.

Also known as a ''multidrop'' link, a multipoint link is a link that connects ''two or more'' nodes. Also known as general topology networks, these include ATM and Frame Relay links, as well as X.25 networks when used as links for a network layer protocol like IP. Unlike broadcast links, there is no mechanism to efficiently send a single message to all other nodes without copying and retransmitting the message. 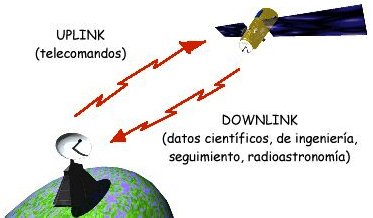 *Pertaining to radiocommunication service, an uplink (UL or U/L) is the portion of a feeder link used for the transmission of signals from an earth station to a space radio station, space radio system or high altitude platform station. *Pertaining to GSM and cellular networks, the radio uplink is the transmission path from the mobile station (cell phone) to a base station (cell site). Traffic and signalling flowing within the BSS and NSS may also be identified as uplink and downlink. *Pertaining to computer networks, an uplink is a connection from data communications equipment toward the network core. This is also known as an upstream connection.

*Pertaining to radiocommunication service, a downlink (DL or D/L) is the portion of a feeder link used for the transmission of signals from a space radio station, space radio system or high altitude platform station to an earth station. *In the context of satellite communications, a downlink (DL) is the link from a satellite to a ground station. *Pertaining to cellular networks, the radio downlink is the transmission path from a cell site to the cell phone. Traffic and signalling flowing within the base station subsystem (BSS) and network switching subsystem (NSS) may also be identified as uplink and downlink. *Pertaining to computer networks, a downlink is a connection from data communications equipment towards data terminal equipment. This is also known as a downstream connection.