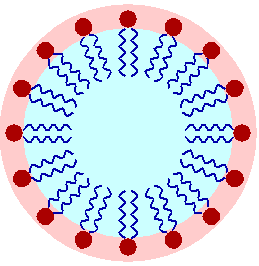 Surfactants are compounds that lower the surface tension (or interfacial tension) between two liquids, between a gas and a liquid, or between a liquid and a solid. Surfactants may act as detergents, wetting agents, emulsifiers, foaming agents, or dispersants. The word "surfactant" is a blend of ''surface-active agent'', coined . Agents that increase surface tension are "surface active" in the literal sense but are not called surfactants since their effect is opposite to the common meaning. A common example of surface tension increase is salting out: by adding an inorganic salt to an aqueous solution of a weakly polar substance, the substance will precipitate. The substance may itself be a surfactant - this is one of the reasons why many surfactants are ineffective in sea water. diagram of a micelle – the lipophilic tails of the surfactant ions remain inside the oil because they interact more strongly with oil than with water. The polar "heads" of the surfactant molecules coating the micelle interact more strongly with water, so they form a hydrophilic outer layer that forms a barrier between micelles. This inhibits the oil droplets, the hydrophobic cores of micelles, from merging into fewer, larger droplets ("emulsion breaking") of the micelle. The compounds that coat a micelle are typically amphiphilic in nature, meaning that micelles may be stable either as droplets of aprotic solvents such as oil in water, or as protic solvents such as water in oil. When the droplet is aprotic it is sometimes known as a reverse micelle.]]

Surfactants are usually organic compounds that are amphiphilic, meaning they contain both hydrophobic groups (their ''tails'') and hydrophilic groups (their ''heads''). Therefore, a surfactant contains both a water-insoluble (or oil-soluble) component and a water-soluble component. Surfactants will diffuse in water and adsorb at interfaces between air and water or at the interface between oil and water, in the case where water is mixed with oil. The water-insoluble hydrophobic group may extend out of the bulk water phase, into the air or into the oil phase, while the water-soluble head group remains in the water phase. World production of surfactants is estimated at 15 million tons per year, of which about half are soaps. Other surfactants produced on a particularly large scale are linear alkylbenzene sulfonates (1.7 million tons/y), lignin sulfonates (600,000 tons/y), fatty alcohol ethoxylates (700,000 tons/y), and alkylphenol ethoxylates (500,000 tons/y). thumb|alt=Sodium dodecylbenzenesulfonate|4-(5-Dodecyl) benzenesulfonate, a linear dodecylbenzenesulfonate, one of the most common surfactants

Structure of surfactant phases in water

In the bulk aqueous phase, surfactants form aggregates, such as micelles, where the hydrophobic tails form the core of the aggregate and the hydrophilic heads are in contact with the surrounding liquid. Other types of aggregates can also be formed, such as spherical or cylindrical micelles or lipid bilayers. The shape of the aggregates depends on the chemical structure of the surfactants, namely the balance in size between the hydrophilic head and hydrophobic tail. A measure of this is the hydrophilic-lipophilic balance (HLB). Surfactants reduce the surface tension of water by adsorbing at the liquid-air interface. The relation that links the surface tension and the surface excess is known as the Gibbs isotherm.

Dynamics of surfactants at interfaces

The dynamics of surfactant adsorption is of great importance for practical applications such as in foaming, emulsifying or coating processes, where bubbles or drops are rapidly generated and need to be stabilized. The dynamics of absorption depend on the diffusion coefficient of the surfactant. As the interface is created, the adsorption is limited by the diffusion of the surfactant to the interface. In some cases, there can exist an energetic barrier to adsorption or desorption of the surfactant. If such a barrier limits the adsorption rate, the dynamics are said to be ‘kinetically limited'. Such energy barriers can be due to steric or electrostatic repulsions. The surface rheology of surfactant layers, including the elasticity and viscosity of the layer, play an important role in the stability of foams and emulsions.

Characterization of interfaces and surfactant layers

thumb|300px|Phosphatidylcholine, found in lecithin, is a pervasive biological surfactant. Shown in – [[choline and [[phosphate]] group; – [[glycerol]]; – [[monounsaturated fatty acid]]; – [[saturated fatty acid]].]] The human body produces diverse surfactants. [[Pulmonary surfactant]] is produced in the [[lung]]s in order to facilitate breathing by increasing total lung capacity, and lung compliance. In respiratory distress syndrome or RDS, surfactant replacement therapy helps patients have normal respiration by using pharmaceutical forms of the surfactants. One example of pharmaceutical pulmonary surfactants is Survanta (beractant) or its generic form Beraksurf produced by Abbvie and Tekzima respectively. Bile salts, a surfactant produced in the liver, play an important role in digestion.

Most anionic and non-ionic surfactants are non-toxic, having LD50 comparable to sodium chloride. The toxicity of quaternary ammonium compounds, which are antibacterial and antifungal, varies. Dialkyldimethylammonium chlorides (DDAC, DSDMAC) used as fabric softeners have low LD50 (5 g/kg) and are essentially non-toxic, while the disinfectant alkylbenzyldimethylammonium chloride has an LD50 of 0.35 g/kg. Prolonged exposure to surfactants can irritate and damage the skin because surfactants disrupt the lipid membrane that protects skin and other cells. Skin irritancy generally increases in the series non-ionic, amphoteric, anionic, cationic surfactants.