Sugarcane or sugar cane refers to several species and hybrids of tall Perennial plant|perennial grass in the genus ''Saccharum'', tribe Andropogoneae, that are used for sugar production. The plants are two to six meters (six to twenty feet) tall with stout, jointed, fibrous stalks that are rich in sucrose, which accumulates in the stalk internodes. Sugarcanes belong to the grass family, Poaceae, an economically important flowering plant family that includes maize, wheat, rice, and sorghum, and many forage crops. It is native to the warm temperate tropical regions of India, Southeast Asia, and New Guinea. The plant is also grown for biofuel production, especially in Brazil, as the canes can be used directly to produce ethyl alcohol (ethanol). Sugarcane is the world's largest crop by production quantity, with 1.8 billion tonnes produced in 2017, with Brazil accounting for 40% of the world total. In 2012, the Food and Agriculture Organization estimated it was cultivated on about , in more than 90 countries. About 70% of the sugar produced globally comes from a species of sugarcane called ''Saccharum officinarum'' and hybrids of this species. All sugarcane species can interbreed, and the major commercial cultivars are complex hybrids. Sugarcane accounts for 79% of sugar produced; most of the rest is made from sugar beets. While sugarcane predominantly grows in tropical and subtropical regions, sugar beets typically grow in cooler temperate regions. Sucrose (table sugar) is extracted from sugarcane in specialized mill factories. It is consumed directly in confectionery, used to sweeten beverages, a preservative in jams and conserves, as a decorative finish for cakes and pâtisserie, as a raw material in the food industry or fermented to produce ethanol. Products derived from fermentation of sugar include falernum, molasses, rum, cachaça, and bagasse. In some regions, people use sugarcane reeds to make pens, mats, screens, and thatch. The young, unexpanded flower head of ''Saccharum edule'' (''duruka'') is eaten raw, steamed, or toasted, and prepared in various ways in Southeast Asia, including Fiji and certain island communities of Indonesia. Sugarcane was an ancient crop of the Austronesian and Papuan people. It was introduced to Polynesia, Island Melanesia, and Madagascar in prehistoric times via Austronesian sailors. It was also introduced to southern China and India by Austronesian traders at around 1200 to 1000 BC. The Persians and Greeks encountered the famous "reeds that produce honey without bees" in India between the 6th and 4th centuries BC. They adopted and then spread sugarcane agriculture. Merchants began to trade in sugar, which was considered a luxurious and expensive spice, from India. In the 18th century AD, sugarcane plantations began in Caribbean, South American, Indian Ocean and Pacific island nations and the need for laborers became a major driver of large migrations of people, some voluntarily accepting indentured servitude and others forcibly exported as slaves.

The term "sugarcane" is a combination of two words; sugar and cane. The former meaning ultimately derives from Sanskrit शर्करा (''śárkarā'') as the crop originated in Southeast Asia. As sugar was traded and spread West, this became سُكَّر (''sukkar'') in Arabic, ''zúcchero'' in Italian, ''zuccarum'' in Latin and eventually ''sucre'' in both Middle French and Middle English. The second term "cane" began to be used alongside it as the crop was grown on plantations in the Caribbean; ''gana'' is the hindi word for sugarcane (gana = cane). This term is ultimately of Hebrew-origin from קנה (''KaNeH'') meaning "reed" or "stalk". This term was introduced by Sephardic Jews in the 17th century in the French West Indies (Guadeloupe and Martinique), who spoke Judeo-Spanish and owned sugar plantations worked by their African slaves which produced sugarcane crop, until they were expelled by king Louis XIV in 1685 as part of the ''Code Noir''. 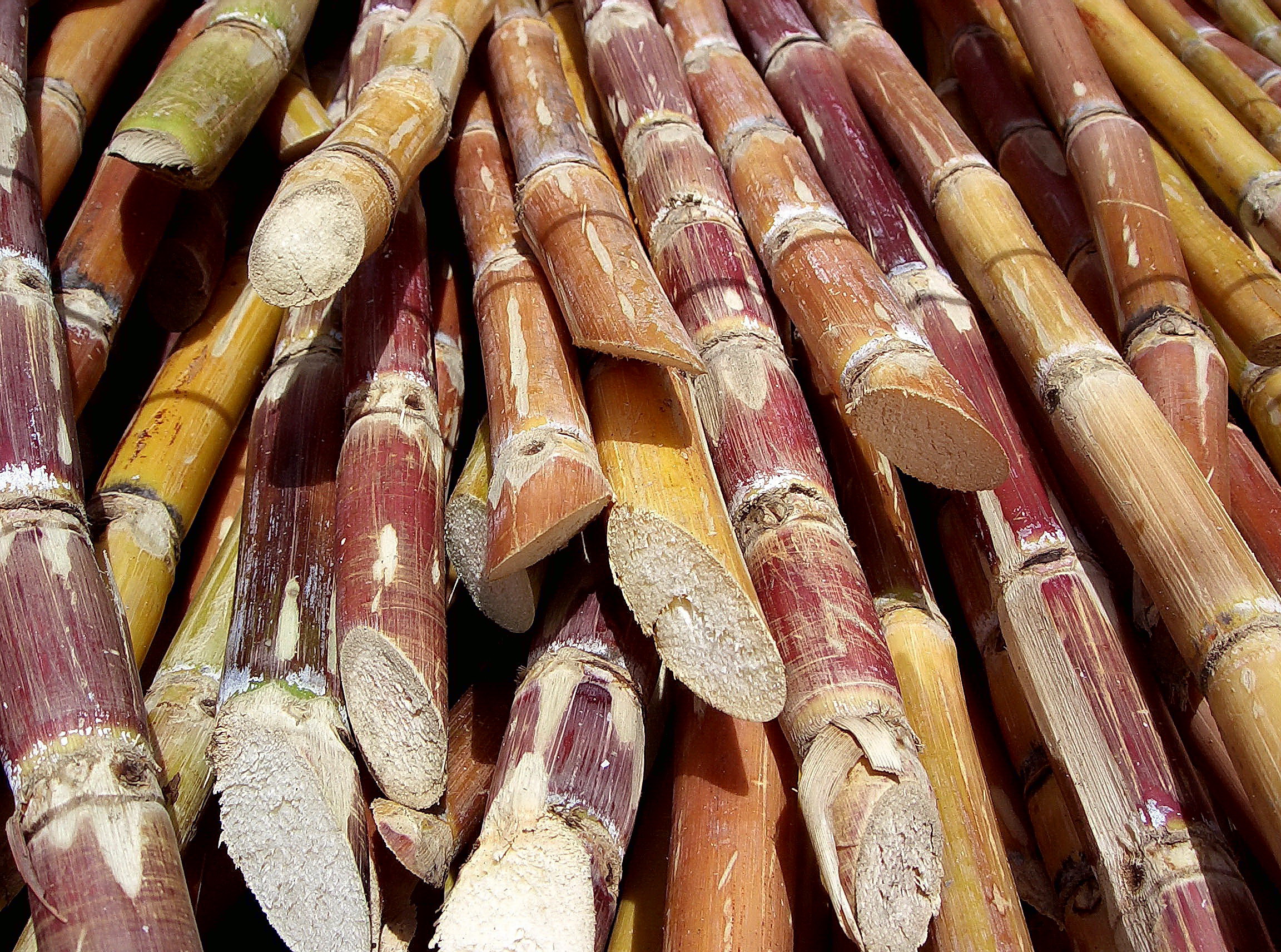 Sugarcane is a tropical, perennial grass that forms lateral shoots at the base to produce multiple stems, typically high and about in diameter. The stems grow into cane stalk which, when mature, constitutes around 75% of the entire plant. A mature stalk is typically composed of 11–16% fiber, 12–16% soluble sugars, 2–3% non-sugars, and 63–73% water. A sugarcane crop is sensitive to climate, soil type, irrigation, fertilizers, insects, disease control, varieties, and the harvest period. The average yield of cane stalk is per year. However, this figure can vary between 30 and 180 tonnes per hectare depending on knowledge and crop management approach used in sugarcane cultivation. Sugarcane is a cash crop, but it is also used as livestock fodder. 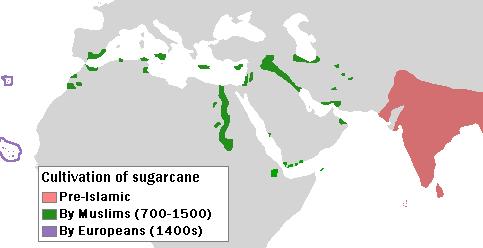 From Island Southeast Asia, ''S. officinarum'' was spread eastward into Polynesia and Micronesia by Austronesian voyagers as a canoe plant by around 3,500 BP. It was also spread westward and northward by around 3,000 BP to China and India by Austronesian traders, where it further hybridized with ''Saccharum sinense'' and ''Saccharum barberi''. From there it spread further into western Eurasia and the Mediterranean. The earliest known production of crystalline sugar began in northern India. The exact date of the first cane sugar production is unclear. The earliest evidence of sugar production comes from ancient Sanskrit and Pali texts. Around the 8th century, Muslim and Arab traders introduced sugar from medieval India to the other parts of the Abbasid Caliphate in the Mediterranean, Mesopotamia, Egypt, North Africa, and Andalusia. By the 10th century, sources state that every village in Mesopotamia grew sugarcane. It was among the early crops brought to the Americas by the Spanish, mainly Andalusians, from their fields in the Canary Islands, and the Portuguese from their fields in the Madeira Islands. An article on Sugarcane cultivation in Spain is brought down in Ibn al-'Awwam's 12th-century agricultural work, ''Book on Agriculture''. Christopher Columbus first brought sugarcane to the Caribbean during his second voyage to the Americas; initially to the island of Hispaniola (modern day Haiti and the Dominican Republic). In colonial times, sugar formed one side of the triangle trade of New World raw materials, along with European manufactured goods, and African slaves. Sugar, often in the form of molasses, was shipped from the Caribbean to Europe or New England, where it was used to make rum. The profits from the sale of sugar were then used to purchase manufactured goods, which were then shipped to West Africa, where they were bartered for slaves. The slaves were then brought back to the Caribbean to be sold to sugar planters. The profits from the sale of the slaves were then used to buy more sugar, which was shipped to Europe. France found its sugarcane islands so valuable that it effectively traded its portion of Canada, famously dubbed "a few acres of snow", to Britain for their return of Guadeloupe, Martinique and St. Lucia at the end of the Seven Years' War. The Dutch similarly kept Suriname, a sugar colony in South America, instead of seeking the return of the New Netherlands (New York). Boiling houses in the 17th through 19th centuries converted sugarcane juice into raw sugar. These houses were attached to sugar plantations in the Western colonies. Slaves often ran the boiling process under very poor conditions. Rectangular boxes of brick or stone served as furnaces, with an opening at the bottom to stoke the fire and remove ashes. At the top of each furnace were up to seven copper kettles or boilers, each one smaller and hotter than the previous one. The cane juice began in the largest kettle. The juice was then heated and lime added to remove impurities. The juice was skimmed and then channeled to successively smaller kettles. The last kettle, the "teache", was where the cane juice became syrup. The next step was a cooling trough, where the sugar crystals hardened around a sticky core of molasses. This raw sugar was then shoveled from the cooling trough into hogsheads (wooden barrels), and from there into the curing house.

In the British Empire, slaves were liberated after 1833 and many would no longer work on sugarcane plantations when they had a choice. British owners of sugarcane plantations therefore needed new workers, and they found cheap labour in China and India. The people were subject to indenture, a long-established form of contract which bound them to forced labour for a fixed term; apart from the fixed term of servitude, this resembled slavery. The first ships carrying indentured labourers from India left in 1836. The migrations to serve sugarcane plantations led to a significant number of ethnic Indians, southeast Asians and Chinese settling in various parts of the world. In some islands and countries, the South Asian migrants now constitute between 10 and 50% of the population. Sugarcane plantations and Asian ethnic groups continue to thrive in countries such as Fiji, South Africa, Burma, Sri Lanka, Malaysia, Indonesia, Philippines, British Guiana, Jamaica, Trinidad, Martinique, French Guiana, Guadeloupe, Grenada, St. Lucia, St. Vincent, St. Kitts, St. Croix, Suriname, Nevis, and Mauritius.