The Strategic Defense Initiative (SDI), nicknamed the "''Star Wars'' program", was a proposed missile defense system intended to protect the United States from attack by ballistic strategic nuclear weapons (intercontinental ballistic missiles and submarine-launched ballistic missiles). The concept was first announced on March 23, 1983 by President Ronald Reagan, a vocal critic of the doctrine of mutually assured destruction (MAD), which he described as a "suicide pact", and called upon American scientists and engineers to develop a system that would render nuclear weapons obsolete. The Strategic Defense Initiative Organization (SDIO) was set up in 1984 within the US Department of Defense to oversee development. A wide array of advanced weapon concepts, including lasers, particle beam weapons and ground- and space-based missile systems were studied, along with various sensor, command and control, and high-performance computer systems that would be needed to control a system consisting of hundreds of combat centers and satellites spanning the entire globe and involved in a very short battle. A number of these concepts were tested through the late 1980s, and follow-on efforts and spin-offs continue to this day. Under the SDIO's Innovative Sciences and Technology Office, headed by physicist and engineer Dr. James Ionson, the investment was predominantly made in basic research at national laboratories, universities, and in industry; these programs have continued to be key sources of funding for top research scientists in the fields of high-energy physics, supercomputing/computation, advanced materials, and many other critical science and engineering disciplines – funding which indirectly supports other research work by top scientists, and which would be politically impossible to fund outside of the defense budget environment. In 1987, the American Physical Society concluded that the technologies being considered were decades away from being ready for use, and at least another decade of research was required to know whether such a system was even possible. After the publication of the APS report, SDI‘s budget was repeatedly cut. By the late 1980s, the effort had been re-focused on the "Brilliant Pebbles" concept using small orbiting missiles not unlike a conventional air-to-air missile, which was expected to be much less expensive to develop and deploy. SDI was controversial in some sectors, and was criticized for threatening to destabilize the MAD-approach and to possibly re-ignite "an offensive arms race". By the early 1990s, with the Cold War ending and nuclear arsenals being rapidly reduced, political support for SDI collapsed. SDI officially ended in 1993, when the Bill Clinton administration redirected the efforts towards theatre ballistic missiles and renamed the agency the Ballistic Missile Defense Organization (BMDO).

The US Army had considered the issue of ballistic missile defense (BMD) as early as late in World War II. Studies on the topic suggested attacking a V-2 rocket would be difficult because the flight time was so short that it would leave little time to forward information through command and control networks to the missile batteries that would attack them. Bell Labs pointed out that although longer-range missiles flew much faster, their longer flight times would address the timing issue and their very high altitudes would make long-range detection by radar easier. This led to a series of projects including Nike Zeus, Nike-X, Sentinel and ultimately the Safeguard Program, all aimed at deploying a nationwide defensive system against attacks by Soviet ICBMs. The reason for so many programs was the rapidly changing strategic threat; the Soviets claimed to be producing missiles "like sausages", and ever-more missiles would be needed to defend against this growing fleet. Low-cost countermeasures like radar decoys required additional interceptors to counter. An early estimate suggested one would have to spend $20 on defense for every $1 the Soviets spent on offense. The addition of MIRV in the late 1960s further upset the balance in favor of offense systems. This cost-exchange ratio was so favorable that it appeared the only thing building a defense would do would be to cause an arms race. 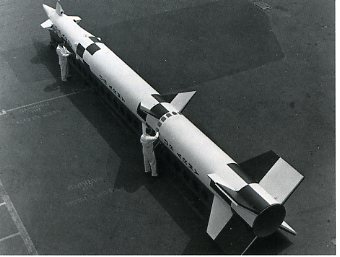 When initially faced with this problem, Dwight D. Eisenhower asked ARPA to consider alternative concepts. Their Project Defender studied all sorts of systems, before abandoning most of them to concentrate on Project BAMBI. BAMBI used a series of satellites carrying interceptor missiles that would attack the Soviet ICBMs shortly after launch. This ''boost phase'' intercept rendered MIRV impotent; a successful attack would destroy all of the warheads. Unfortunately, the operational cost of such a system would be enormous, and the US Air Force continually rejected such concepts. Development was cancelled in 1963. Through this period, the entire topic of BMD became increasingly controversial. Early deployment plans were met with little interest, but by the late 1960s, public meetings on the Sentinel system were met by thousands of angry protesters. After thirty years of effort, only one such system would be built; a single base of the original Safeguard system became operational in April 1975, only to shut down in February 1976. A Soviet military A-35 anti-ballistic missile system was deployed around Moscow to intercept enemy ballistic missiles targeting the city or its surrounding areas. The A-35 was the only Soviet ABM system allowed under the 1972 Anti-Ballistic Missile Treaty. In development since the 1960s and in operation from 1971 until the 1990s, it featured the nuclear-tipped A350 exoatmospheric interceptor missile.

Lead up to SDI

thumb|upright=1.0|The bright spikes extending below the initial fireball of one of 1952's Operation Tumbler–Snapper test shots, are known as the "[[rope trick effect". They are caused by the intense flash of ''thermal''/[[soft X-rays]] released by the explosion heating the steel tower guy-wires white hot. The development of the [[W71]] and the [[Project Excalibur]] x-ray laser were based on enhancing the destructive effects of these x-rays.]] George P. Shultz|George Shultz, Reagan's secretary of state, suggested that a 1967 lecture by physicist Edward Teller (the so-called "father of the hydrogen bomb") was an important precursor to SDI. In the lecture, Teller talked about the idea of defending against nuclear missiles using nuclear weapons, principally the W65 and W71, with the latter being a contemporary enhanced thermal/X-ray device used actively on the Spartan missile in 1975. Held at Lawrence Livermore National Laboratory (LLNL), the 1967 lecture was attended by Reagan shortly after he became the governor of California. Development of laser weapons in the Soviet Union began in 1964–1965. Though classified at the time, a detailed study on a Soviet space-based laser system began no later than 1976 as the ''Skif'', a 1 MW Carbon dioxide laser along with the anti-satellite ''Kaskad'', an in-orbit missile platform. A revolver cannon (Rikhter R-23) was mounted on the 1974 Soviet Salyut 3 space station, a satellite that successfully test fired its cannon in orbit.