Strabo (; el, Στράβων ''Strábōn''; 64 or 63 BC AD 24) was a Greek geographer,
philosopher A philosopher is someone who practices philosophy. The term ''philosopher'' comes from the grc, φιλόσοφος, , translit=philosophos, meaning 'lover of wisdom'. The coining of the term has been attributed to the Greek thinker Pythagoras ( ...
, and
historian ( 484– 425 BC) was a Greek historian who lived in the 5th century BC and one of the earliest historians whose work survives. A historian is a person who studies and writes about the past and is regarded as an authority on it. Historians are con ...
who lived in
Asia Minor Anatolia,, tr, Anadolu Yarımadası), and the Anatolian plateau. also known as Asia Minor, is a large peninsula A peninsula ( la, paeninsula from ' "almost" and ' "island") is a landform surrounded by water on most of its border while be ...
during the transitional period of the Roman Republic into the
Roman Empire 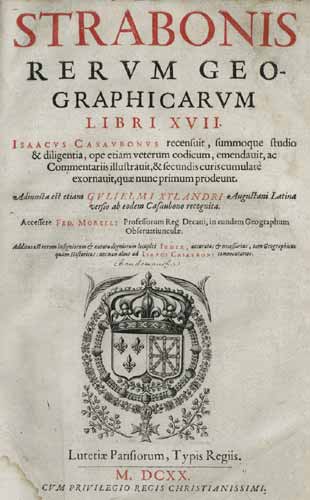 ) in around 64BC. His family had been involved in politics since at least the reign of Mithridates V. Strabo was related to Dorylaeus on his mother's side. Several other family members, including his paternal grandfather had served Mithridates VI during the Mithridatic Wars. As the war drew to a close, Strabo's grandfather had turned several Kingdom of Pontus, Pontic fortresses over to the Romans. Strabo wrote that "great promises were made in exchange for these services", and as Persian Empire, Persian culture endured in Amaseia even after Mithridates and Tigranes the Great#Wars against Rome, Tigranes were defeated, scholars have speculated about how the family's support for Rome might have affected their position in the local community, and whether they might have been granted Roman citizenship as a reward. 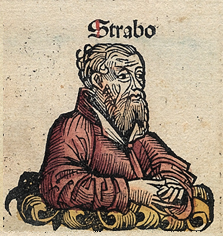 Strabo's life was characterized by extensive travels. He journeyed to Egypt and Kingdom of Kush, Kush, as far west as coastal Tuscany and as far south as Ethiopia in addition to his travels in Asia Minor and the time he spent in Rome. Travel throughout the Mediterranean and Near East, especially for scholarly purposes, was popular during this era and was facilitated by the Pax Romana, relative peace enjoyed throughout the reign of Augustus (27 BC – AD 14). He moved to Rome in 44 BC, and stayed there, studying and writing, until at least 31 BC. In 29 BC, on his way to Corinth (where Augustus was at the time), he visited the island of Gyaros in the Aegean Sea. Around 25 BC, he sailed up the Nile until he reached Philae, after which point there is little record of his travels until AD 17. 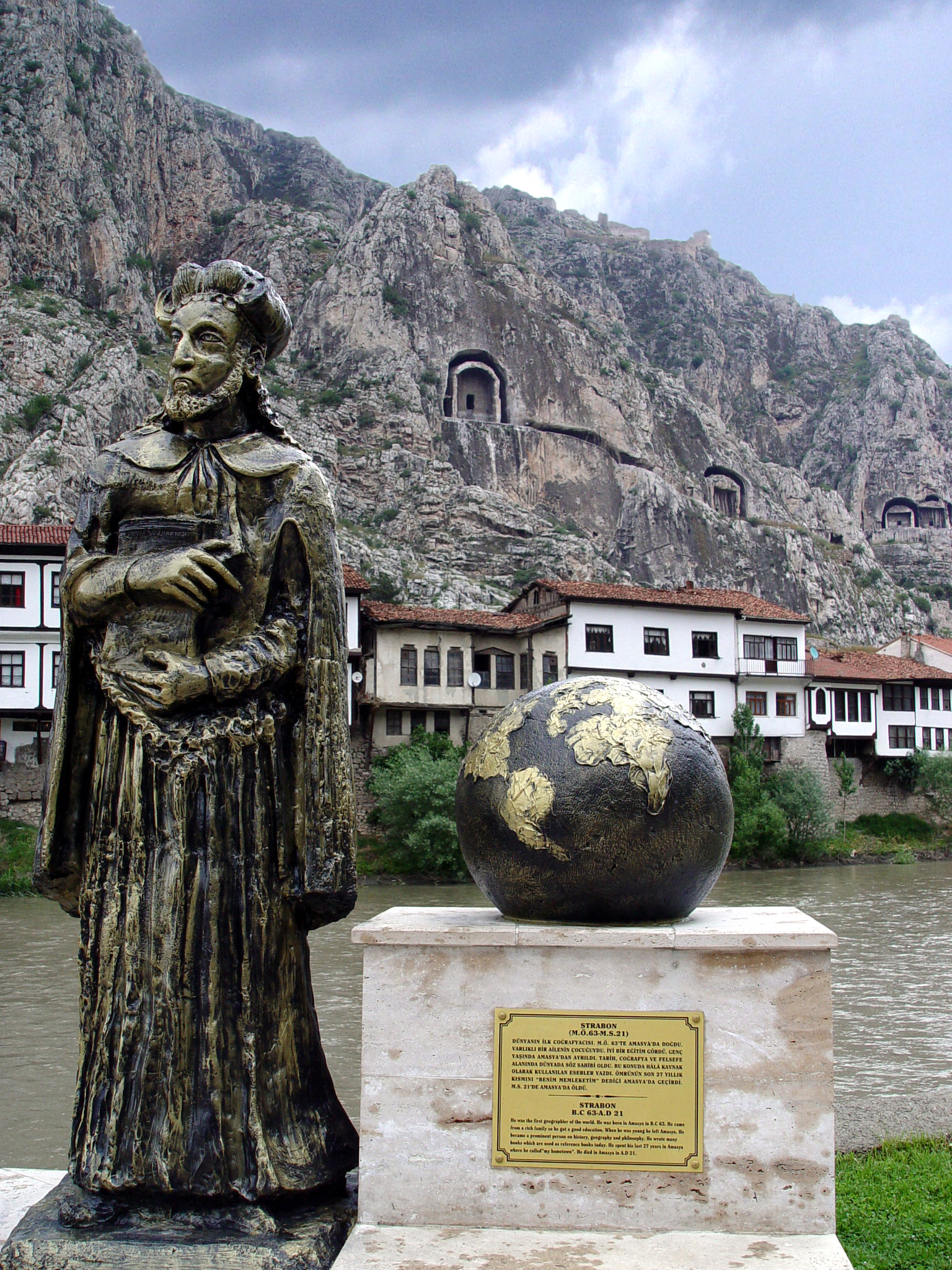 It is not known precisely when Strabo's ''Geography'' was written, though comments within the work itself place the finished version within the reign of Emperor Tiberius. Some place its first drafts around 7 BC, others around AD 17 or AD 18. The latest passage to which a date can be assigned is his reference to the death in AD 23 of Juba II, king of Maurousia (Mauretania), who is said to have died "just recently". He probably worked on the ''Geography'' for many years and revised it steadily, but not always consistently. It is an encyclopaedic chronicle and consists of political, economic, social, cultural, geographic description covering almost all of Europe and the Mediterranean: British Isles, Iberian Peninsula, Gaul, Germania, the Alps, Italy, Greece, Northern Black Sea region, Anatolia, Middle East, Central Asia and North Africa. The ''Geography'' is the only extant work providing information about both Greek and Roman peoples and countries during the reign of Augustus. On the presumption that "recently" means within a year, Strabo stopped writing that year or the next (AD 24), at which time he is thought to have died. He was influenced by Homer, Hecataeus of Miletus, Hecataeus and Aristotle. The first of Strabo's major works, ''Historical Sketches'' (''Historica hypomnemata''), written while he was in Rome (c. 20 BC), is nearly completely lost. Meant to cover the history of the known world from the conquest of Greece by the Romans, Strabo quotes it himself and other classical authors mention that it existed, although the only surviving document is a fragment of papyrus now in the possession of the University of Milan (renumbered [Papyrus] 46).

Strabo studied under several prominent teachers of various specialities throughout his early life at different stops during his Mediterranean travels. The first chapter of his education took place in Nysa on the Maeander, Nysa (modern Sultanhisar, Turkey) under the master of rhetoric Aristodemos of Nysa the Younger, Aristodemus, who had formerly taught the sons of the Roman general who had taken over Pontus. Aristodemus was the head of two schools of rhetoric and grammar, one in Nysa and one in Rhodes. The school in Nysa possessed a distinct intellectual curiosity in Homeric literature and the interpretation of the ancient Greek epics. Strabo was an admirer of Homer's poetry, perhaps as a consequence of his time spent in Nysa with Aristodemus. At around the age of 21, Strabo moved to Rome, where he studied philosophy with the Peripatetic school, Peripatetic Xenarchus, a highly respected tutor in Augustus's court. Despite Xenarchus's Aristotelian leanings, Strabo later gives evidence to have formed his own Stoicism, Stoic inclinations. In Rome, he also learned grammar under the rich and famous scholar Tyrannion of Amisus. Although Tyrannion was also a Peripatetic, he was more relevantly a respected authority on geography, a fact of some significance considering Strabo's future contributions to the field. The final noteworthy mentor to Strabo was Athenodorus Cananites, a philosopher who had spent his life since 44 BC in Rome forging relationships with the Roman elite. Athenodorus passed onto Strabo his philosophy, his knowledge and his contacts. Unlike the Aristotelian Xenarchus and Tyrannion who preceded him in teaching Strabo, Athenodorus was a Stoic and almost certainly the source of Strabo's diversion from the philosophy of his former mentors. Moreover, from his own first-hand experience, Athenodorus provided Strabo with information about regions of the empire which Strabo would not otherwise have known about.

Strabo is best known for his work ''Geographica'' ("Geography"), which presented a descriptive history of people and places from different regions of the world known during his lifetime. 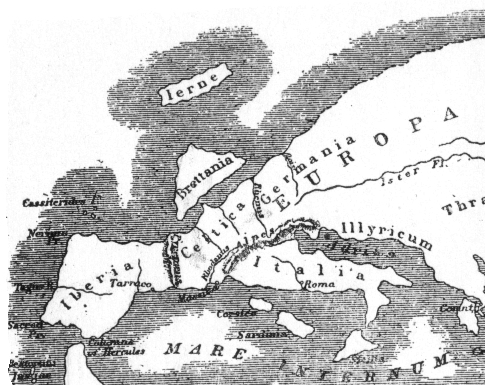 Although the ''Geographica'' was rarely utilized by contemporary writers, a multitude of copies survived throughout the Byzantine Empire. It first appeared in Western Europe in Rome as a Latin translation issued around 1469. The first Greek edition was published in 1516 in Venice. Isaac Casaubon, classical scholar and editor of Greek texts, provided the first critical edition in 1587. Although Strabo cited the classical Greek astronomers Eratosthenes and Hipparchus, acknowledging their astronomical and mathematical efforts covering geography, he claimed that a descriptive approach was more practical, such that his works were designed for statesmen who were more anthropologically than numerically concerned with the character of countries and regions. As such, ''Geographica'' provides a valuable source of information on the ancient world of his day, especially when this information is corroborated by other sources. He travelled extensively, as he says: "Westward I have journeyed to the parts of Etruria opposite Sardinia; towards the south from the Euxine to the borders of Ethiopia; and perhaps not one of those who have written geographies has visited more places than I have between those limits." It is not known when he wrote ''Geographica'', but he spent much time in the famous library in Alexandria taking notes from "the works of his predecessors". A first edition was published in 7 BC and a final edition no later than 23 AD, in what may have been the last year of Strabo's life. It took some time for ''Geographica'' to be recognized by scholars and for ''Geographica'' to become a standard. In his last book of ''Geographica'', he wrote quite extensively about the thriving port city of Alexandria suggesting a highly developed local economy at that time. Strabo also describes the city of Alexandria noting that there were many beautiful public parks and the city was reticulated with streets wide enough for chariots and horsemen. "Two of these are exceeding broad, over a plethron in breadth, and cut one another at right angles ... All the buildings are connected one with another, and these also with what are beyond it." Lawrence Kim observes that Strabo is "... pro-Roman throughout the Geography. But while he acknowledges and even praises Roman ascendancy in the political and military sphere, he also makes a significant effort to establish Greek primacy over Rome in other contexts." In Europe, Strabo was the first to connect the Danube -- Danouios and the Istros --with the change of names occurring at "the cataracts," the modern Iron Gates on the Romanian/Serbian border. In India, a country he never visited, Strabo described small flying reptiles that were long with a snake-like body and bat-like wings, winged scorpions, and other mythical creatures along with those that were factual. Other historians, such as Herodotus, Aristotle, and Josephus, Flavius Josephus, mentioned similar creatures.

Charles Lyell, in his ''Principles of Geology'', wrote of Strabo:

One extraordinary thing which I saw at the pyramids must not be omitted. Heaps of stones from the quarries lie in front of the pyramids. Among these are found pieces which in shape and size resemble lentils. Some contain substances like grains half peeled. These, it is said, are the remnants of the workmen's food converted into stone; which is not probable. For at home in our country (Amaseia), there is a long hill in a plain, which abounds with pebbles of a porous stone, resembling lentils. The pebbles of the sea-shore and of rivers suggest somewhat of the same difficulty [respecting their origin]; some explanation may indeed be found in the motion [to which these are subject] in flowing waters, but the investigation of the above fact presents more difficulty. I have said elsewhere, that in sight of the pyramids, on the other side in Arabia, and near the stone quarries from which they are built, is a very rocky mountain, called the Trojan mountain; beneath it there are caves, and near the caves and the river a village called Troy, an ancient settlement of the captive Trojans who had accompanied Menelaus and settled there.

Strabo commented on volcanism (effusive eruption) which he observed at Katakekaumene (modern Kula, Western Turkey). Strabo observations predated Pliny the Younger who witnessed the eruption of Mount Vesuvius on 24 August AD 79 in Pompeii:

…There are no trees here, but only the vineyards where they produce the Katakekaumene wines which are by no means inferior from any of the wines famous for their quality. The soil is covered with ashes, and black in colour as if the mountainous and rocky country was made up of fires. Some assume that these ashes were the result of thunderbolts and subterranean explosions, and do not doubt that the legendary story of Typhon takes place in this region. Ksanthos adds that the king of this region was a man called Arimus. However, it is not reasonable to accept that the whole country was burned down at a time as a result of such an event rather than as a result of a fire bursting from underground whose source has now died out. Three pits are called "Physas" and separated by forty stadia from each other. Above these pits, there are hills formed by the hot masses burst out from the ground as estimated by a logical reasoning. Such type of soil is very convenient for viniculture, just like the Katanasoil which is covered with ashes and where the best wines are still produced abundantly. Some writers concluded by looking at these places that there is a good reason for calling Dionysus by the name ("Phrygenes").