Under the system of federalism established by the United States Constitution, federal courts have limited jurisdiction, and state courts handle many more cases than do federal courts. Each of the fifty states has at least one supreme court that serves as the highest court in the state; two states, Texas and Oklahoma, have separate supreme courts for civil and criminal matters. The five permanently inhabited U.S. territories, as well Washington, D.C., each have comparable supreme courts. On matters of state law, the judgment of a state supreme court is considered final and binding in both state and federal courts. State supreme courts are completely distinct from any United States federal courts located within the geographical boundaries of a state's territory, or the federal-level Supreme Court. The exact duties and powers of the state supreme courts are established by state constitutions and state law. Generally, state supreme courts, like most appellate tribunals, are exclusively for hearing appeals on decisions issued by lower courts, and do not make any finding of facts or hold trials. They can, however, overrule the decisions of lower courts, remand cases to lower courts for further proceedings, and establish binding precedent for future cases. Some state supreme courts do have original jurisdiction over specific issues; for example, the Supreme Court of Virginia has original jurisdiction over cases of habeas corpus, mandamus, prohibition, and writs of actual innocence based on DNA or other biological evidence.

As the highest court in the state, a state supreme court has appellate jurisdiction over all matters of state law. Many states have two or more levels of courts below the state supreme court; for example, in Pennsylvania, a case might first be heard in one of the Pennsylvania courts of common pleas, be appealed to the Superior Court of Pennsylvania, and then finally be appealed to the Supreme Court of Pennsylvania. In other states, including Delaware, the state supreme court is the only appellate court in the state and thus has direct appellate jurisdiction over all lower courts. Like the U.S. Supreme Court, most state supreme courts have implemented "discretionary review." Under such a system, intermediate appellate courts are entrusted with deciding the vast majority of appeals. Intermediate appellate courts generally focus on the mundane task of what appellate specialists call "error correction," which means their primary task is to decide whether the record reflects that the trial court correctly applied existing law. In a few states without intermediate appellate courts, the state supreme court may operate under "mandatory review", in which it ''must'' hear all appeals from the trial courts. This was the case, for example, in Nevada prior to 2014. For certain categories of cases, many state supreme courts that otherwise have discretionary review operate under mandatory review, usually with regard to cases involving the interpretation of the state constitution or capital punishment. One of the informal traditions of the American legal system is that all litigants are entitled to at least one appeal after a final judgment on the merits. However, appeal is merely a ''privilege'' provided by statute, court rules, or custom in 49 states and in federal judicial proceedings; the U.S. Supreme Court has repeatedly ruled that there is no federal constitutional ''right'' to an appeal.

Iowa, Nevada, and Oklahoma have a unique procedure for appeals. In those states, ''all'' appeals are filed with the appropriate Supreme Court (Iowa and Nevada each have a single Supreme Court, while Oklahoma has separate civil and criminal Supreme Courts) which then keeps all cases of first impression for itself to decide. It forwards the remaining caseswhich deal with points of law it has already addressedto the intermediate Court of Appeals. Under this so-called "push-down" or "deflection" model of appellate procedure, the state supreme court can immediately establish final statewide precedents on important issues of first impression as soon as they arise, rather than waiting several months or years for the intermediate appellate court to make a first attempt at resolving the issue (and leaving the law uncertain in the interim). Notably, the Supreme Court of Virginia operates under discretionary review for nearly all cases, but the intermediate Court of Appeals of Virginia hears appeals as a matter of right only in family and administrative cases. The result is that there is ''no'' first appeal of right for the vast majority of civil and criminal cases in that state. Appellants are still free to petition for review, but such petitions are subject to severe length constraints (6,125 words or 35 pages in Virginia) and necessarily are more narrowly targeted than a long opening appellate brief to an intermediate appellate court (in contrast, an opening brief to a California intermediate appellate court can run up to 14,000 words). In turn, the vast majority of decisions of Virginia circuit courts in civil and criminal cases are thereby insulated from appellate review on the merits.

Under American federalism, a state supreme court's ruling on a matter of purely state law is final and binding and must be accepted in both state and federal courts. However, when a case involves federal statutory or constitutional law, review of state supreme court decisions may be sought by way of a petition for writ of ''certiorari'' to the Supreme Court of the United States. The U.S. Supreme Court is the only federal court that has jurisdiction over direct appeals from state court decisions, although other federal courts are sometimes allowed "collateral review" of state cases in specific situations, for example regarding individuals on death row. As the U.S. Supreme Court recognized in ''Erie Railroad Co. v. Tompkins'' (1938), no part of the federal Constitution actually grants federal courts or the federal Congress the power to directly dictate the content of state law (as distinguished from creating altogether separate federal law that in a particular situation may override state law). Clause 1 of Section 2 of Article Three of the United States Constitution describes the scope of federal judicial power, but only extended it to "the Laws of the United States" and not the laws of the several or individual states. It is this silence on that latter issue that gave rise to the American distinction between state and federal common law not found in other English-speaking common law federations like Australia and Canada. In theory, state supreme courts are bound by the precedent established by the U.S. Supreme Court as to all issues of federal law, but in practice, the Supreme Court reviews very few decisions from state courts. For example, in 2007 the Court reviewed 244 cases appealed from federal courts and only 22 from state courts. Despite the relatively small number of decisions reviewed, Professors Sara Benesh and Wendy Martinek found that state supreme courts follow precedent more closely than federal courts in the area of search and seizure and appear to follow precedent in confessions as well. Additionally, some scholars have argued that state and federal courts should judge according to different judicial theories on topics such as statutory interpretation and stare decisis. 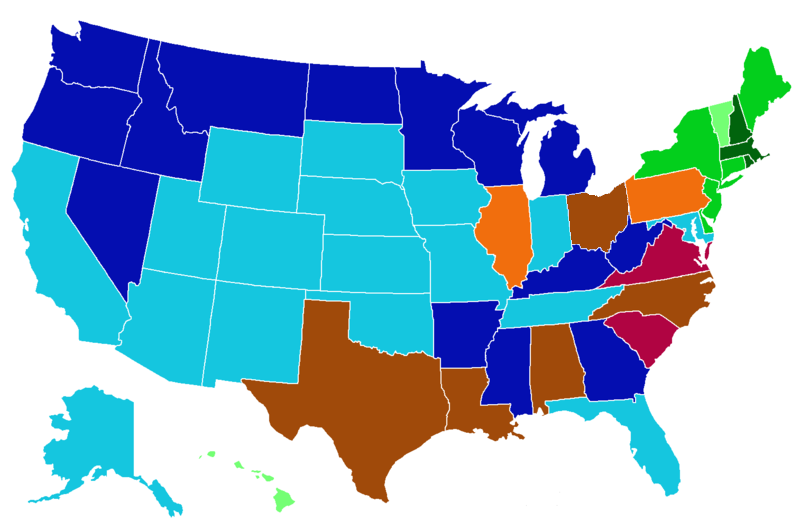 State supreme court judges are selected in a variety of ways, with the method of selection often depending on the circumstances in which the seat is filled. Under one common method, the Missouri Plan, the governor fills judicial vacancies by choosing from a list compiled by a non-partisan commission. These judges serve an interim term until they stand in a retention election, in which they win a full term if a majority of voters vote for retention. Many other states elect judges through non-partisan elections in which multiple candidates appear on the ballot without their partisan affiliation listed. Most of the remaining states base their judicial selection system on gubernatorial appointments or partisan elections, although several states use a mix of different methods. South Carolina and Virginia use a system of legislative appointment, while in Vermont, the governor makes the initial appointment of judges, but the legislature has the power to re-appoint judges to new terms. Various other factors can influence the appointment and re-appointment of state supreme court judges. Most judicial selection systems involving gubernatorial appointment make use of a nominating commission to recommend a list of candidates from which the governor must choose, but a minority of states allow the governor to nominate candidates even if they were not recommended by the commission. Many of the states that use gubernatorial appointment require the appointment to be confirmed by the state legislature or some other body, such as the Massachusetts Governor's Council. Although most states limit judicial terms to a set number of years, judges in Massachusetts and New Hampshire serve until they reach a mandatory retirement limit, while in Rhode Island, judges serve lifetime appointments. Most judges represent the entire state, but in Illinois, Kentucky, Louisiana, and Mississippi, judges represent districts of the state. Many states, including some states in which the governor is not otherwise involved in the appointment process, allow the governor to make interim appointments to fill judicial vacancies. In many states with judicial elections, political contributions from groups such as trade associations and political action committees are allowed.

The various states provide different methods for the removal of state supreme court judges during their terms, with many states providing multiple methods. Two common methods of removal are impeachment by the state legislature, and removal by state judicial boards or commissions. Other states provide for the removal of judges through recall elections, court action, gubernatorial action (with legislative consent), or through a resolution passed by a super-majority in both houses of the state legislature.

Because state supreme courts generally hear only appeals, some courts have names which directly indicate their functionin the states of New York and Maryland, and in the District of Columbia, the highest court is called the "Court of Appeals". In New York, the "Supreme Court" is the trial court of general unlimited jurisdiction and the intermediate appellate court is called the "Supreme Court—Appellate Division". Maryland's jury trial courts are called "Circuit Courts" (non-jury trials are usually conducted by the "District Courts," whose decisions may be appealed to the Circuit Courts), and the intermediate appellate court is called the "Court of Special Appeals". West Virginia mixes the two; its highest court is called the "Supreme Court of Appeals". Other states' supreme courts have used the term "Appeals": New Jersey's supreme courts under the 1844 constitution and Delaware's supreme court were both the "Court of Errors and Appeals"; The term "Errors" refers to the now-obsolete writ of error, which was used by state supreme courts to correct certain types of egregious errors committed by lower courts. Massachusetts and New Hampshire originally named their highest courts the "Superior Court of Judicature." Currently, Massachusetts uses the names "Supreme Judicial Court" (to distinguish itself from the state legislature, which is called the Massachusetts General Court), while New Hampshire uses the name "Supreme Court". Additionally the highest court in Maine is named the "Supreme Judicial Court". This similar terminology is probably a holdover from the time when Maine was part of Massachusetts. In Connecticut, Delaware, New Jersey, and New York, the highest courts formerly used variations of the term "Court of Errors," which indicated that the court's primary purpose was to correct the errors of lower courts.