Spencer was first settled in 1717 by Nathaniel Wood, and first permanently settled by Samuel Bemis in 1721. Spencer is located in central Worcester County, twenty minutes west of Worcester, Massachusetts, Worcester via Massachusetts Route 9, Route 9, and about forty-five east of Springfield, Massachusetts, Springfield via Routes 49, 20, and the Massachusetts Turnpike. It was officially incorporated on April 12, 1753, splitting from the town of Leicester, Massachusetts, Leicester. Spencer was named after the then-acting governor of Massachusetts, Spencer Phips. Spencer was the home of the Howe family of inventors, including Elias Howe, who perfected the lockstitch sewing machine. In 1784, Spencer was a major stopping place on the Old Boston Post Road's stage route between Boston and Hartford, Connecticut, Hartford, and on to New York City, New York. Passengers changed stages in Spencer, as one coach would come from Boston and connect with one coming north from Hartford. Each stagecoach would turn around and return whence it came. Travelers often stopped for the night at Jenk's Tavern in Spencer, as did General Henry Knox, pushing his cannons through the streets of the town on his way to Boston from Fort Ticonderoga, Ticonderoga, and George Washington in 1789. Spencer still has colonial-era 1767 Milestones, milestone markers showing the route of the old post road. When the American Revolutionary War, War of Independence broke out in 1775 it found Spencer ready to take part; fifty-six men under Captain Ebenezer Mason immediately set out to Boston. Many of these men later took part in the Battle of Bunker Hill. A total of 313 Spencer men are known to have served in the American Civil War, Civil War; thirty-two lost their lives in the service of their country. 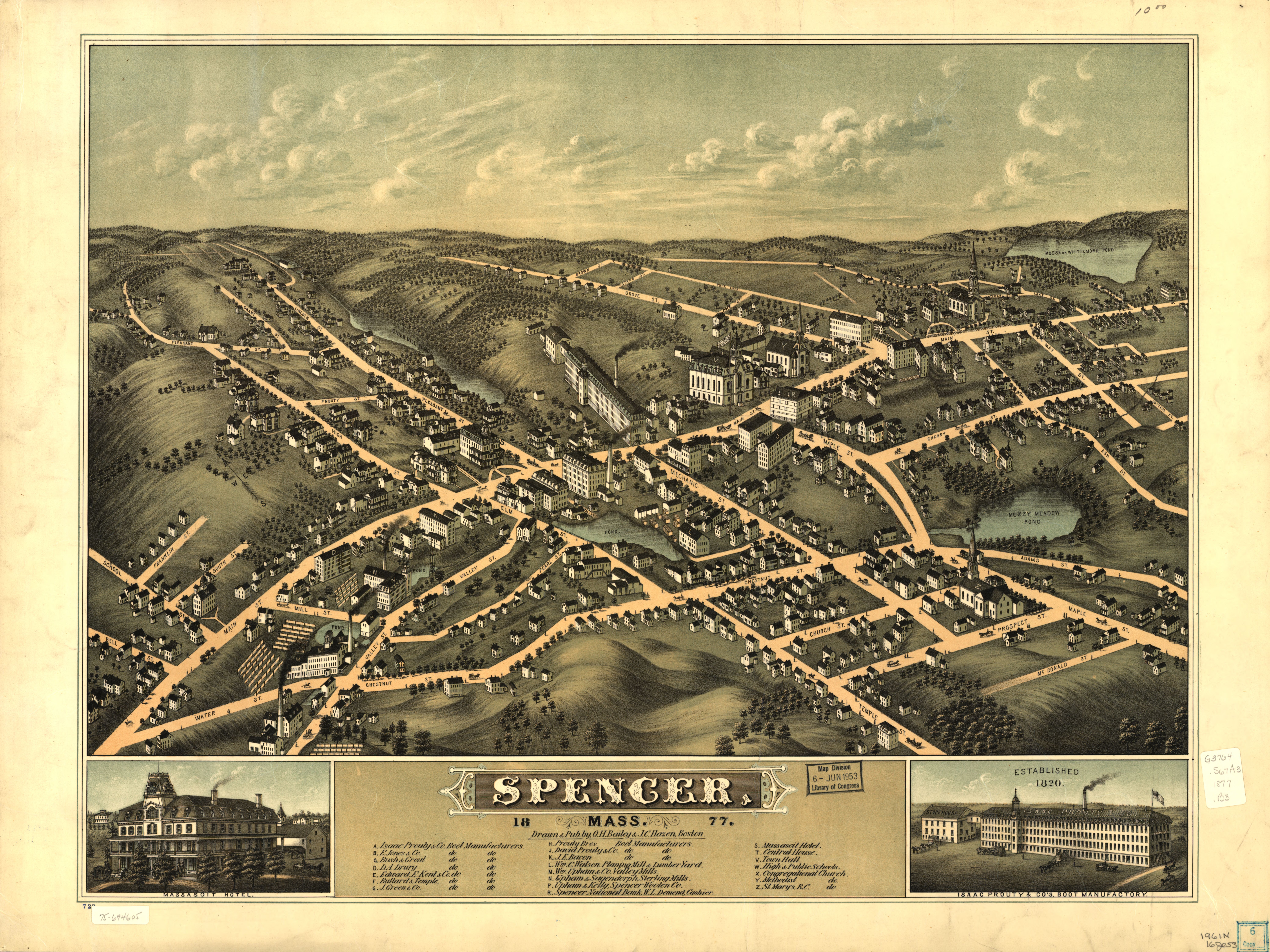 Spencer's first mill was built in 1740 on the Seven Mile River (East Brookfield River), Seven Mile River, the greatest source of waterpower in the town. In 1811, Josiah Green began making shoes, and in 1834 he built a factory. The Prouty family began to make shoes in 1820, and built their factory in 1855. In 1812, Elliot Prouty had begun to "draw" wire in a mill he had built. His business flourished in his family until 1916, when it merged with Wickwire Steel Co. At one time, Spencer had 11 factories and 26 buildings for wire drawing. In 1839 the town hall was constructed, and eighteen years later, Denny Hall, the town's first high school, was built. In 1888–1889, four prominent citizens (David Prouty, Richard Sugden, Luther Hill and Nathaniel Myrick) presented the town with a new high school, a library, a public park and the Spencer Agricultural Fair Grounds. The Howe family of Spencer did much to make the town famous in the annals of ingenious Americans. William Howe (architect), William Howe of Spencer developed a wooden truss bridge named for him, and his brother, Tyler Howe, patented a spring bed. Their nephew, Elias Howe, Jr., may well have eclipsed them when he invented the lockstitch sewing machine. Spencer is home to Saint Joseph's Abbey, a cloistered Roman Catholic monastery of monks of the Cistercian Order of the Strict Observance, popularly known as Trappists. They support the order through their three industries: the Holy Rood Guild, which makes a variety of liturgical garments (vestments) and linens; and Trappist Preserves, jams and jellies sold in retail outlets and at their gift shop in the Porter's Lodge; and Spencer Trappist Ale (the first and only certified Trappist beer made in the U.S.

On April 25, 2007, it was discovered early in the morning that there was a malfunction at one of the town's water treatment facilities where a hazardous amount of sodium hydroxide (lye) was released into the town's water supply. The official cause was a malfunction of the system due to operator error, that regulates the amount of lye released. According to local news reports, dozens of people received medical treatment for "burning sensations and skin rashes".

Spencer's public schools are regionalized K–12 with East Brookfield. Spencer students attend Wire Village School for grades kindergarten through fourth. Students from both towns attend Knox Trail Junior High School for grades 5–8, but the 6th grade is only students from Spencer; David Prouty High School for grades 9–12. David Prouty Junior High School, which was also the former building of the old high school, was recently closed and reopened as a senior living center after being replaced by the Wire Village School. * Some students come out of the 8th grade and have the option of going to Bay Path RVTHS for high school. On November 18, 2015, more than 200 students from David Prouty High School took part in a sit-in in protest of the district's administration. Protesting the lack of current textbooks, cuts in the music and theater programs, the band, and the Student Council, they walked out of class and spent the day in the gymnasium. Having not been satisfied with having their voices heard at the School Committee meeting the night before, they were targeting the superintendent, Tracey Crowe, whom the district's teachers had also given a vote of no confidence in.