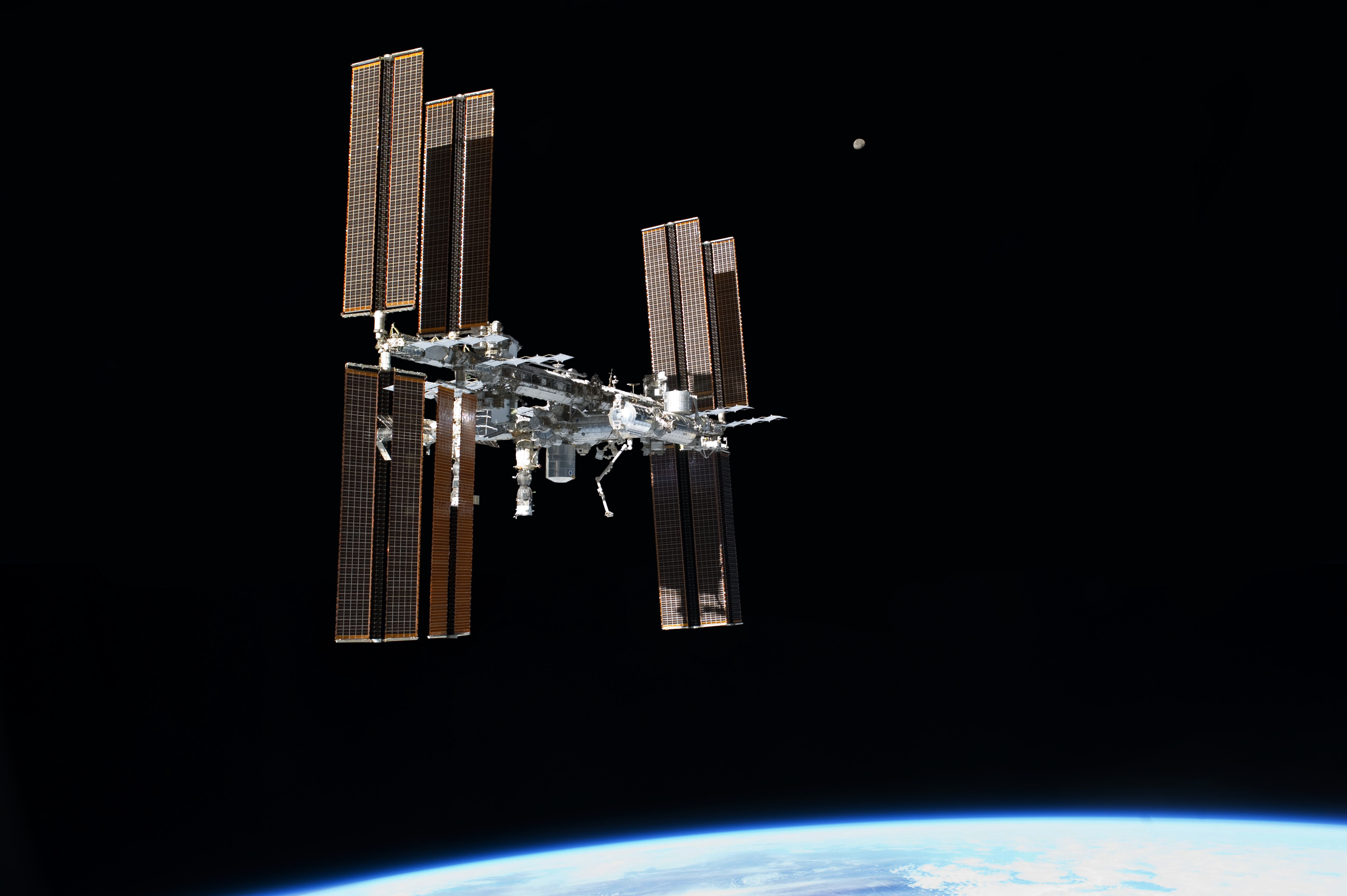 A space station, also known as an orbital station or an orbital space station, is a spacecraft capable of supporting a human crew in orbit for an extended period of time, and is therefore a type of space habitat. It lacks major propulsion or landing systems. Stations must have docking ports to allow other spacecraft to dock to transfer crew and supplies. The purpose of maintaining an orbital outpost varies depending on the program. Space stations have most often been launched for scientific purposes, but military launches have also occurred. As of , one fully operational and permanently inhabited space station is in low Earth orbit: the International Space Station (ISS), which is used to study the effects of spaceflight on the human body as well as to provide a location to conduct a greater number and longer length of scientific studies than is possible on other space vehicles. China, India, Russia, and the U.S., as well as Bigelow Aerospace and Axiom Space, are all planning other stations for the coming decades.

The first mention of anything resembling a space station occurred in Edward Everett Hale's 1869 "The Brick Moon". The first to give serious, scientifically grounded consideration to space stations were Konstantin Tsiolkovsky and Hermann Oberth about two decades apart in the early 20th century. In 1929 Herman Potočnik's ''The Problem of Space Travel'' was published, the first to envision a "rotating wheel" space station to create artificial gravity. Conceptualized during the Second World War, the "sun gun" was a theoretical orbital weapon orbiting Earth at a height of . No further research was ever conducted. In 1951, Wernher von Braun published a concept for a rotating wheel space station in ''Collier's Weekly'', referencing Potočnik's idea. However, development of a rotating station was never begun in the 20th century.

Early stations were monolithic designs that were constructed and launched in one piece, generally containing all their supplies and experimental equipment. A crew would then be launched to join the station and perform research. After the supplies had been used up, the station was abandoned. The first space station was Salyut 1, which was launched by the Soviet Union on April 19, 1971. The earlier Soviet stations were all designated "Salyut", but among these there were two distinct types: civilian and military. The military stations, Salyut 2, Salyut 3, and Salyut 5, were also known as Almaz stations. The civilian stations Salyut 6 and Salyut 7 were built with two docking ports, which allowed a second crew to visit, bringing a new spacecraft with them; the Soyuz ferry could spend 90 days in space, at which point it needed to be replaced by a fresh Soyuz spacecraft. This allowed for a crew to man the station continually. The American Skylab (1973-1979) was also equipped with two docking ports, like second-generation stations, but the extra port was never utilized. The presence of a second port on the new stations allowed Progress supply vehicles to be docked to the station, meaning that fresh supplies could be brought to aid long-duration missions. This concept was expanded on Salyut 7, which "hard docked" with a TKS tug shortly before it was abandoned; this served as a proof-of-concept for the use of modular space stations. The later Salyuts may reasonably be seen as a transition between the two groups.

Unlike previous stations, the Soviet space station ''Mir'' had a modular design; a core unit was launched, and additional modules, generally with a specific role, were later added to that. This method allows for greater flexibility in operation, as well as removing the need for a single immensely powerful launch vehicle. Modular stations are also designed from the outset to have their supplies provided by logistical support craft, which allows for a longer lifetime at the cost of requiring regular support launches. Modules are still being developed based on the design and capabilities of ''Mir''.

China's first space laboratory, Tiangong-1 was launched in September 2011. The uncrewed Shenzhou 8 then successfully performed an automatic rendezvous and docking in November 2011. The crewed Shenzhou 9 then docked with Tiangong-1 in June 2012, the crewed Shenzhou 10 in 2013. A second space laboratory Tiangong-2 was launched in September 2016, while a plan for Tiangong-3 was merged with Tiangong-2. In May 2017, China informed the United Nations Office for Outer Space Affairs that Tiangong-1's altitude was decaying and that it would soon reenter the atmosphere and break up. The reentry was projected to occur in late March or early April 2018. According to the China Manned Space Engineering Office, Tiangong-1 reentered over the South Pacific Ocean, northwest of Tahiti, on 2 April 2018 at 00:15 UTC. In July 2019 the China Manned Space Engineering Office announced that it was planning to deorbit Tiangong-2 in the near future, but no specific date was given. The station subsequently made a controlled reentry on 19 July and burned up over the South Pacific Ocean.

The ISS is divided into two main sections, the Russian Orbital Segment (ROS) and the US Orbital Segment (USOS). The first module of the International Space Station, Zarya, was launched in 1998. The Russian Orbital Segment's "second-generation" modules were able to launch on Proton, fly to the correct orbit, and dock themselves without human intervention. Connections are automatically made for power, data, gases, and propellants. The Russian autonomous approach allows the assembly of space stations prior to the launch of crew. The Russian "second-generation" modules are able to be reconfigured to suit changing needs. As of 2009, RKK Energia was considering the removal and reuse of some modules of the ROS on the Orbital Piloted Assembly and Experiment Complex after the end of mission is reached for the ISS. However, in September 2017 the head of Roscosmos said that the technical feasibility of separating the station to form OPSEK had been studied, and there were now no plans to separate the Russian segment from the ISS. In contrast, the main US modules launched on the Space Shuttle and were attached to the ISS by crews during EVAs. Connections for electrical power, data, propulsion, and cooling fluids are also made at this time, resulting in an integrated block of modules that is not designed for disassembly and must be deorbited as one mass. The Axiom Orbital Segment is a planned commercial segment to be added to the ISS starting in the mid 2020s. Axiom Space gained NASA approval for the venture in January 2020. Up to three Axiom modules will attach to the International Space Station. The first module could be launched no later than 2024 and will be docked to the forward port of ''Harmony'', requiring relocation of the PMA-2. Axiom Space plans to attach up to two additional modules to its first core module, and send private astronauts to inhabit the modules. The modules could one day detach into the Axiom Station in a manner similar to Russia's proposed OPSEK.

Two types of space stations have been flown: monolithic and modular. Monolithic stations consist of a single vehicle and are launched by one rocket. Modular stations consist of two or more separate vehicles that are launched independently and docked on orbit. Modular stations are currently preferred due to lower costs and greater flexibility. Both types can be refueled by cargo craft, such as Progress. A space station is a complex vehicle that must incorporate many interrelated subsystems, including structure, electrical power, thermal control, attitude determination and control, orbital navigation and propulsion, automation and robotics, computing and communications, environmental and life support, crew facilities, and crew and cargo transportation. Stations must serve a useful role, which drives the capabilities required.

Space stations are often made from durable materials that have to weather space radiation, internal pressure, micrometeoroids, and thermal effects of the sun and cold temperatures for very long periods of time. They are typically made from stainless steel, titanium and high-quality aluminum alloys, with layers of insulation such as Kevlar as a ballistics shield protection.

The space station environment presents a variety of challenges to human habitability, including short-term problems such as the limited supplies of air, water and food and the need to manage waste heat, and long-term ones such as weightlessness and relatively high levels of ionizing radiation. These conditions can create long-term health problems for space-station inhabitants, including muscle atrophy, bone deterioration, balance disorders, eyesight disorders, and elevated risk of cancer. Future space habitats may attempt to address these issues, and could be designed for occupation beyond the weeks or months that current missions typically last. Possible solutions include the creation of artificial gravity by a rotating structure, the inclusion of radiation shielding, and the development of on-site agricultural ecosystems. Some designs might even accommodate large numbers of people, becoming essentially "cities in space" where people would reside semi-permanently. For now, no space station suitable for long-term human residence has ever been built, since the current launch costs for even a small station are not economically or politically viable.

Molds that develop aboard space stations can produce acids that degrade metal, glass and rubber. Despite an expanding array of molecular approaches for detecting microorganisms, rapid and robust means of assessing the differential viability of the microbial cells, as a function of phylogenetic lineage, remain elusive.

Space stations, sometimes referred to as star bases, are a common trope in science fiction. Notable works they appear in include TV shows ''Babylon 5'' and ''Star Trek: Deep Space Nine'', among others. Typically they act as drydocks, battle stations or trading outposts.