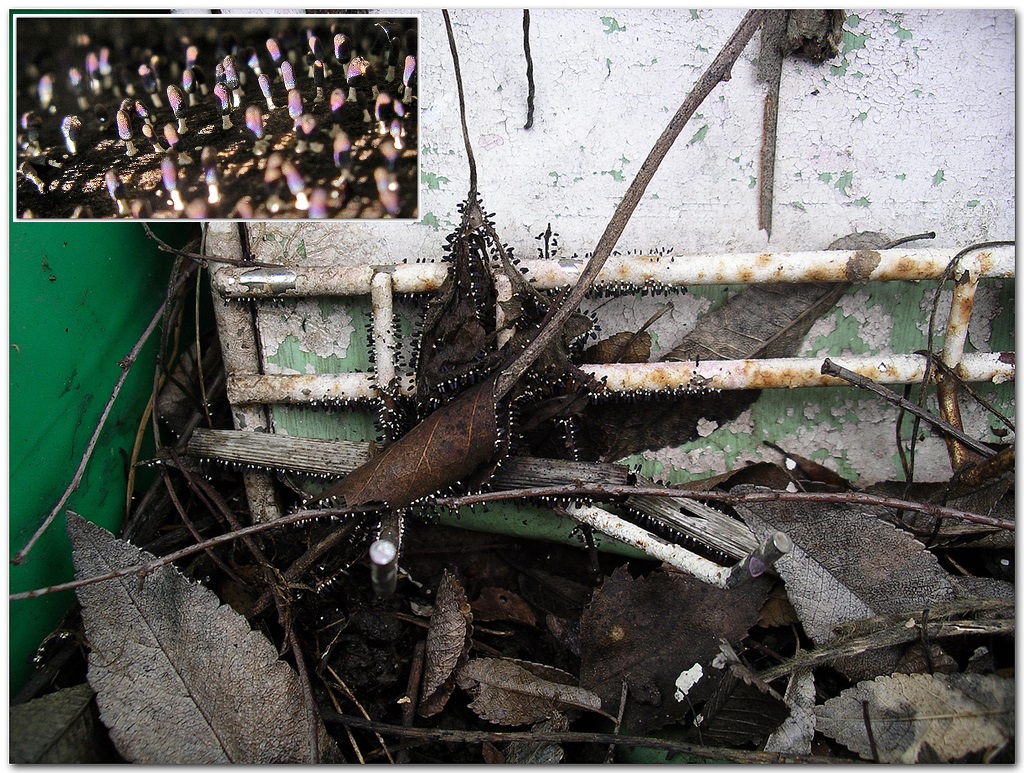 Slime mold or slime mould is an informal name given to several kinds of unrelated eukaryotic organisms that can live freely as single cells, but can aggregate together to form multicellular reproductive structures. Slime molds were formerly classified as fungi but are no longer considered part of that kingdom. Although not forming a single monophyletic clade, they are grouped within the paraphyletic group referred to as kingdom Protista. More than 900 species of slime mold occur globally. Their common name refers to part of some of these organisms' life cycles where they can appear as gelatinous "slime". This is mostly seen with the Myxogastria, which are the only macroscopic slime molds. Most slime molds are smaller than a few centimeters, but some species may reach sizes up to several square meters and masses up to 20 kilograms. Many slime molds, mainly the "cellular" slime molds, do not spend most of their time in this state. When food is abundant, these slime molds exist as single-celled organisms. When food is in short supply, many of these single-celled organisms will congregate and start moving as a single body. In this state they are sensitive to airborne chemicals and can detect food sources. They can readily change the shape and function of parts, and may form stalks that produce fruiting bodies, releasing countless spores, light enough to be carried on the wind or hitch a ride on passing animals. They feed on microorganisms that live in any type of dead plant material. They contribute to the decomposition of dead vegetation, and feed on bacteria, yeasts, and fungi. For this reason, slime molds are usually found in soil, lawns, and on the forest floor, commonly on deciduous logs. In tropical areas they are also common on inflorescences and fruits, and in aerial situations (e.g., in the canopy of trees). In urban areas, they are found on mulch or in the leaf mold in rain gutters, and also grow in air conditioners, especially when the drain is blocked.

Slime molds, as a group, are polyphyletic. They were originally represented by the subkingdom Gymnomycota in the Fungi kingdom and included the defunct phyla Myxomycota, Acrasiomycota, and Labyrinthulomycota. Today, slime molds have been divided among several supergroups, ''none'' of which is included in the kingdom Fungi. Slime molds can generally be divided into two main groups. *A plasmodial slime mold is enclosed within a single membrane without walls and is one large cell. This "supercell" (a syncytium) is essentially a bag of cytoplasm containing thousands of individual nuclei. See heterokaryosis. *By contrast, cellular slime molds spend most of their lives as individual unicellular protists, but when a chemical signal is secreted, they assemble into a cluster that acts as one organism.

In more strict terms, slime molds comprise the mycetozoan group of the amoebozoa. Mycetozoa include the following three groups: *Myxogastria or myxomycetes: syncytial, plasmodial, or acellular slime molds *Dictyosteliida or dictyostelids: cellular slime molds *Protosteloids: amoeboid slime-molds that form fruiting bodies Even at this level of classification there are conflicts to be resolved. Recent molecular evidence shows that, while the first two groups are likely to be monophyletic, the protosteloids are likely to be polyphyletic. For this reason, scientists are currently trying to understand the relationships among these three groups. 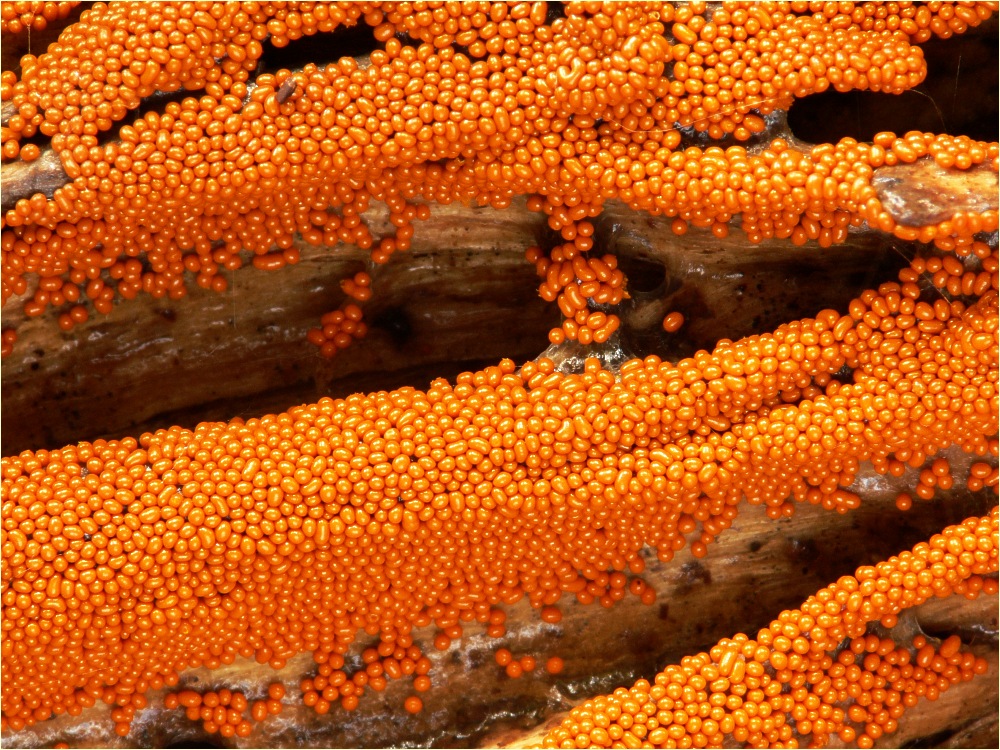 The most commonly encountered are the Myxogastria. A common slime mold that forms tiny brown tufts on rotting logs is ''Stemonitis''. Another form, which lives in rotting logs and is often used in research, is ''Physarum polycephalum''. In logs, it has the appearance of a slimy web-work of yellow threads, up to a few feet in size. ''Fuligo'' forms yellow crusts in mulch. The ''Dictyosteliida'' – cellular slime molds – are distantly related to the plasmodial slime molds and have a very different lifestyle. Their amoebae do not form huge coenocytes, and remain individual. They live in similar habitats and feed on microorganisms. When food is depleted and they are ready to form sporangia, they do something radically different. They release signal molecules into their environment, by which they find each other and create swarms. These amoebae then join up into a tiny multicellular slug-like coordinated creature, which crawls to an open lit place and grows into a fruiting body. Some of the amoebae become spores to begin the next generation, but some of the amoebae sacrifice themselves to become a dead stalk, lifting the spores up into the air. The protosteloids have characters intermediate between the previous two groups, but they are much smaller, the fruiting bodies only forming one to a few spores. Non-amoebozoan slime molds include: * Acrasids (order Acrasida): slime molds which belong to the Heterolobosea within the supergroup Excavata. They have a similar life style to Dictyostelids, but their amoebae behave differently, having eruptive pseudopodia. They used to belong to the defunct phylum of Acrasiomycota. * Plasmodiophorids (order Plasmodiophorida): parasitic protists which belong to the supergroup Rhizaria. They can cause cabbage club root disease and powdery scab tuber disease. The Plasmodiophorids also form coenocytes, but are internal parasites of plants (e.g., club root disease of cabbages). * Labyrinthulomycota: slime nets, which belong to the superphylum Heterokonta as the class Labyrinthulomycetes. They are marine and form labyrinthine networks of tubes in which amoeba without pseudopods can travel. * ''Fonticula'' is a cellular slime mold that forms a fruiting body in a "volcano" shape. ''Fonticula'' is not closely related to either the Dictyosteliida or the Acrasidae. A 2009 paper finds it to be related to ''Nuclearia'', which in turn is related to fungi.

Slime molds begin life as amoeba-like cells. These unicellular amoebae are commonly haploid and feed on bacteria. These amoebae can mate if they encounter the correct mating type and form zygotes that then grow into plasmodia. These contain many nuclei without cell membranes between them, and can grow to meters in size. The species ''Fuligo septica'' is often seen as a slimy yellow network in and on rotting logs. The amoebae and the plasmodia engulf microorganisms. The plasmodium grows into an interconnected network of protoplasmic strands. Within each protoplasmic strand, the cytoplasmic contents rapidly stream. If one strand is carefully watched for about 50 seconds, the cytoplasm can be seen to slow, stop, and then reverse direction. The streaming protoplasm within a plasmodial strand can reach speeds of up to 1.35 mm per second, which is the fastest rate recorded for any microorganism. Migration of the plasmodium is accomplished when more protoplasm streams to advancing areas and protoplasm is withdrawn from rear areas. When the food supply wanes, the plasmodium will migrate to the surface of its substrate and transform into rigid fruiting bodies. The fruiting bodies or sporangia are what are commonly seen. They superficially look like fungi or molds but are not related to the true fungi. These sporangia will then release spores which hatch into amoebae to begin the life cycle again. 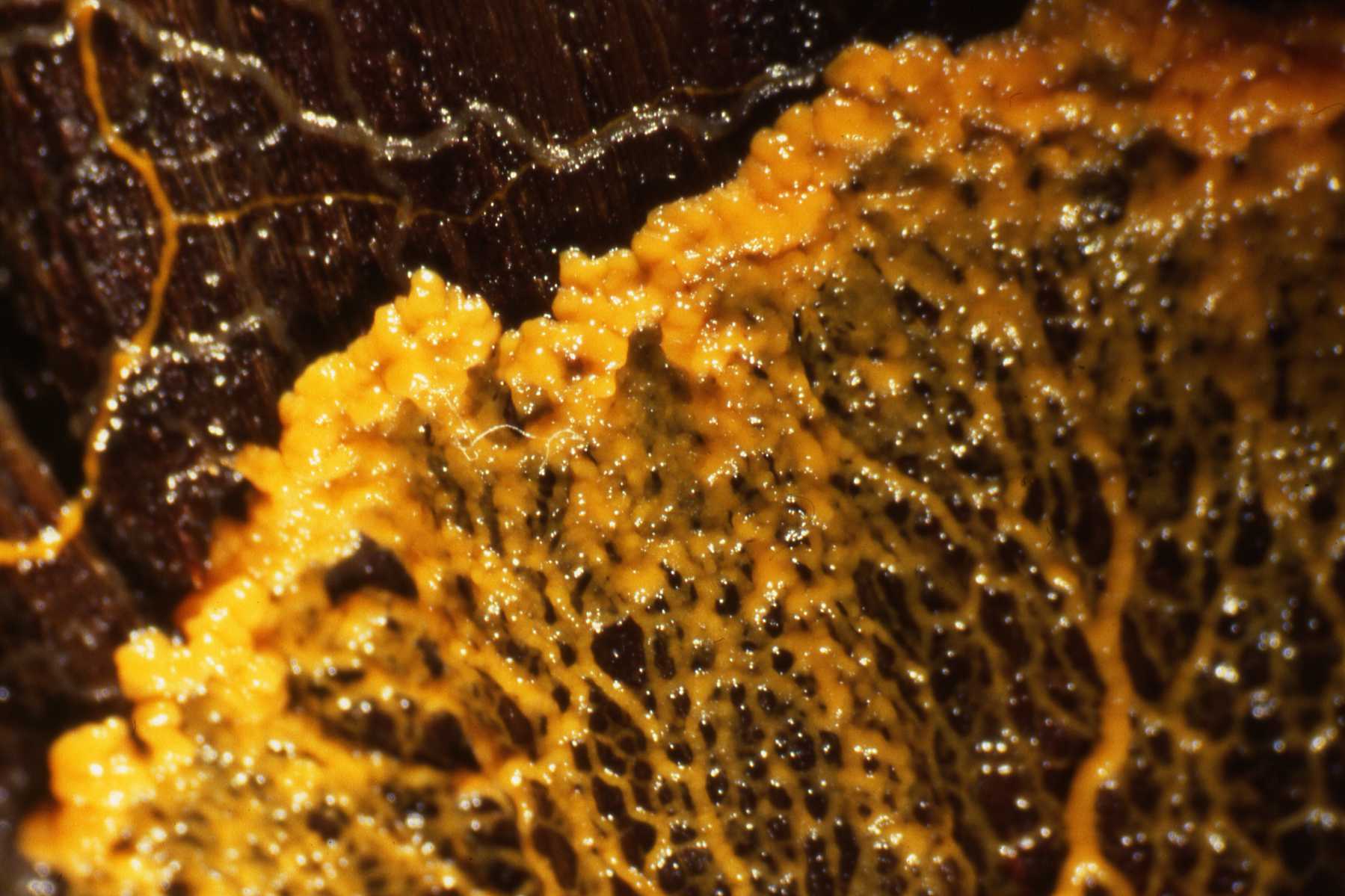 Slime molds are isogamous organisms, which means their reproductive cells are all the same size. There are over 900 species of slime molds that exist today. ''Physarum polycephalum'' is one species that has three reproductive genes – ''mat''A, ''mat''B, and ''mat''C. The first two types have thirteen separate variations. ''Mat''C, however, only has three variations. Each reproductively mature slime mold contains two copies of each of the three reproductive genes. When ''Physarum polycephalum'' is ready to make its reproductive cells, it grows a bulbous extension of its body to contain them. Each cell is created with a random combination of the genes that the slime mold contains within its genome. Therefore, it can create cells with up to eight different gene types. Once these cells are released, they are independent and tasked with finding another cell it is able to fuse with. Other ''Physarum polycephalum'' may contain different combinations of the ''mat''A, ''mat''B, and ''mat''C genes, allowing over 500 possible variations. It is advantageous for organisms with this type of reproductive cell to have many mating types because the likelihood of the cells finding a partner is greatly increased. At the same time, the risk of inbreeding is drastically reduced.

''Dictyostelium discoideum'' is another species of slime mold that has many different mating types. When this organism has entered the stage of reproduction, it releases an attractant, called ''acrasin''. Acrasin is made up of cyclic adenosine monophosphate, or cyclic AMP. Cyclic AMP is crucial in passing hormone signals between reproductive cells. When it comes time for the cells to fuse, ''Dictyostelium discoideum'' has mating types of its own that dictate which cells are compatible with each other. These include NC-4, WS 582, WS 583, WS 584, WS 5-1, WS 7, WS 10, WS 11-1, WS 28-1, WS 57-6, and WS 112b. A scientific study demonstrated the compatibility of these eleven mating types of ''Dictyostelium discoideum'' by monitoring the formation of macrocysts. For example, WS 583 is very compatible with WS 582, but not NC-4. It was concluded that cell contact between the compatible mating types needs to occur before macrocysts can form.

In ''Myxogastria'', the plasmodial portion of the life cycle only occurs after syngamy, which is the fusion of cytoplasm and nuclei of myxoamoebae or swarm cells. The diploid zygote becomes a multinucleated plasmodium through multiple nuclear divisions without further cell division. Myxomycete plasmodia are multinucleate masses of protoplasm that move by cytoplasmic streaming. In order for the plasmodium to move, cytoplasm must be diverted towards the leading edge from the lagging end. This process results in the plasmodium advancing in fan-like fronts. As it moves, plasmodium also gains nutrients through the phagocytosis of bacteria and small pieces of organic matter. The plasmodium also has the ability to subdivide and establish separate plasmodia. Conversely, separate plasmodia that are genetically similar and compatible can fuse together to create a larger plasmodium. In the event that conditions become dry, the plasmodium will form a sclerotium, essentially a dry and dormant state. In the event that conditions become moist again the sclerotium absorbs water and an active plasmodium is restored. When the food supply wanes, the Myxomycete plasmodium will enter the next stage of its life cycle forming haploid spores, often in a well-defined sporangium or other spore-bearing structure.

When a slime mold mass or mound is physically separated, the cells find their way back to re-unite. Studies on ''Physarum polycephalum'' have even shown an ability to learn and predict periodic unfavorable conditions in laboratory experiments. John Tyler Bonner, a professor of ecology known for his studies of slime molds, argues that they are "no more than a bag of amoebae encased in a thin slime sheath, yet they manage to have various behaviors that are equal to those of animals who possess muscles and nerves with ganglia – that is, simple brains." Atsushi Tero of Hokkaido University grew ''Physarum'' in a flat wet dish, placing the mold in a central position representing Tokyo and oat flakes surrounding it corresponding to the locations of other major cities in the Greater Tokyo Area. As ''Physarum'' avoids bright light, light was used to simulate mountains, water and other obstacles in the dish. The mold first densely filled the space with plasmodia, and then thinned the network to focus on efficiently connected branches. The network strikingly resembled Tokyo's rail system. Slime mold ''Physarum polycephalum'' was also used by Andrew Adamatzky from the University of the West of England and his colleagues world-wide in experimental laboratory approximations of motorway networks of 14 geographical areas: Australia, Africa, Belgium, Brazil, Canada, China, Germany, Iberia, Italy, Malaysia, Mexico, the Netherlands, UK and US.