is the capital city of Shizuoka Prefecture, Japan, and the prefecture's second-largest city in both population and area. It has been populated since prehistoric times. the city had an estimated population of 690,881 in 106,087 households, and a population density of . The city's name is made up of two ''kanji'', 静 ''shizu'', meaning "still" or "calm"; and 岡 ''oka'', meaning "hill(s)". In 1869, Shizuoka Domain was first created out of the older Sunpu Domain, and that name was retained when the city was incorporated in 1885. In 2003, Shizuoka absorbed neighboring Shimizu City (now Shimizu Ward) to create the new and expanded city of Shizuoka, briefly becoming the largest city by land area in Japan. In 2005, it became one of Japan's "designated cities".

Shizuoka City lies in central Shizuoka Prefecture, about halfway between Tokyo and Nagoya along the Tōkaidō Corridor, between Suruga Bay to the south and the Minami Alps in the north. Shizuoka had the largest area of any municipality in Japan after merging with Shimizu City in April 2003, until February 2005, when Takayama in Gifu Prefecture superseded it by merging with nine surrounding municipalities. 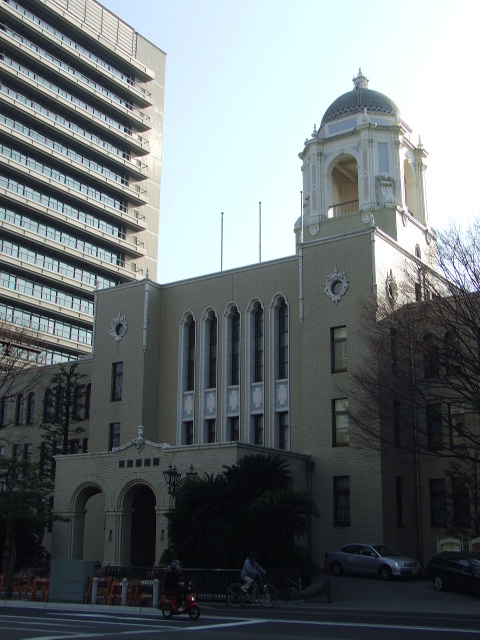 The total area of the city is . Shizuoka is the 5th largest city in Japan in terms of geographic area after Takayama, Hamamatsu, Nikkō, and Kitami. It is also the 2nd largest city in Shizuoka Prefecture in terms of both geographic area and population after Hamamatsu, but ranks higher as an Urban Employment Area, and leads as a metropolitan area and business region. The fan-like shape of the Shizuoka Plain and Miho Peninsula were formed over the ages by the fast-flowing Abe River, carrying along collapsed sand and earth. These areas form the foundations of the city today. The isolated Mount Kunō separates the Suruga coastline from the Shimizu coastline.

On the south-central Pacific coast Shizuoka has a humid subtropical climate (Köppen climate classification ''Cfa''), which is hot and humid in the summer, and rarely snows in the winter. It is close to the warm Kuroshio Current and is wet even by Japanese standards with only slightly less precipitation than Kanazawa on the opposite side of Honshū, but it is paradoxically the sunniest of Japan's major cities owing to the absence of summer fog and its sheltered location from the northwesterly winds off the Sea of Japan. Further north, the mountainous Ikawa area is part of the Japanese snow country, where there are ski areas. 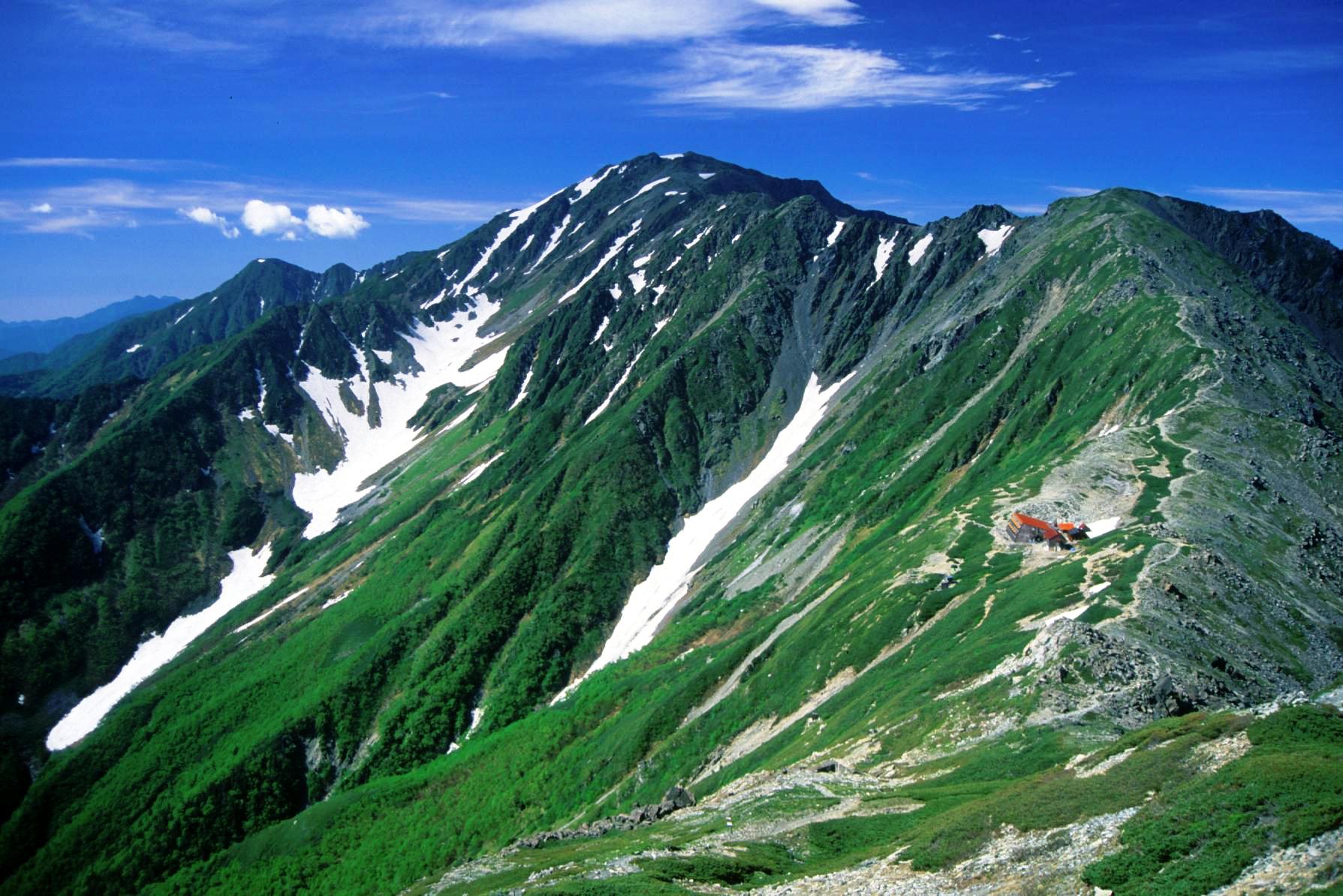 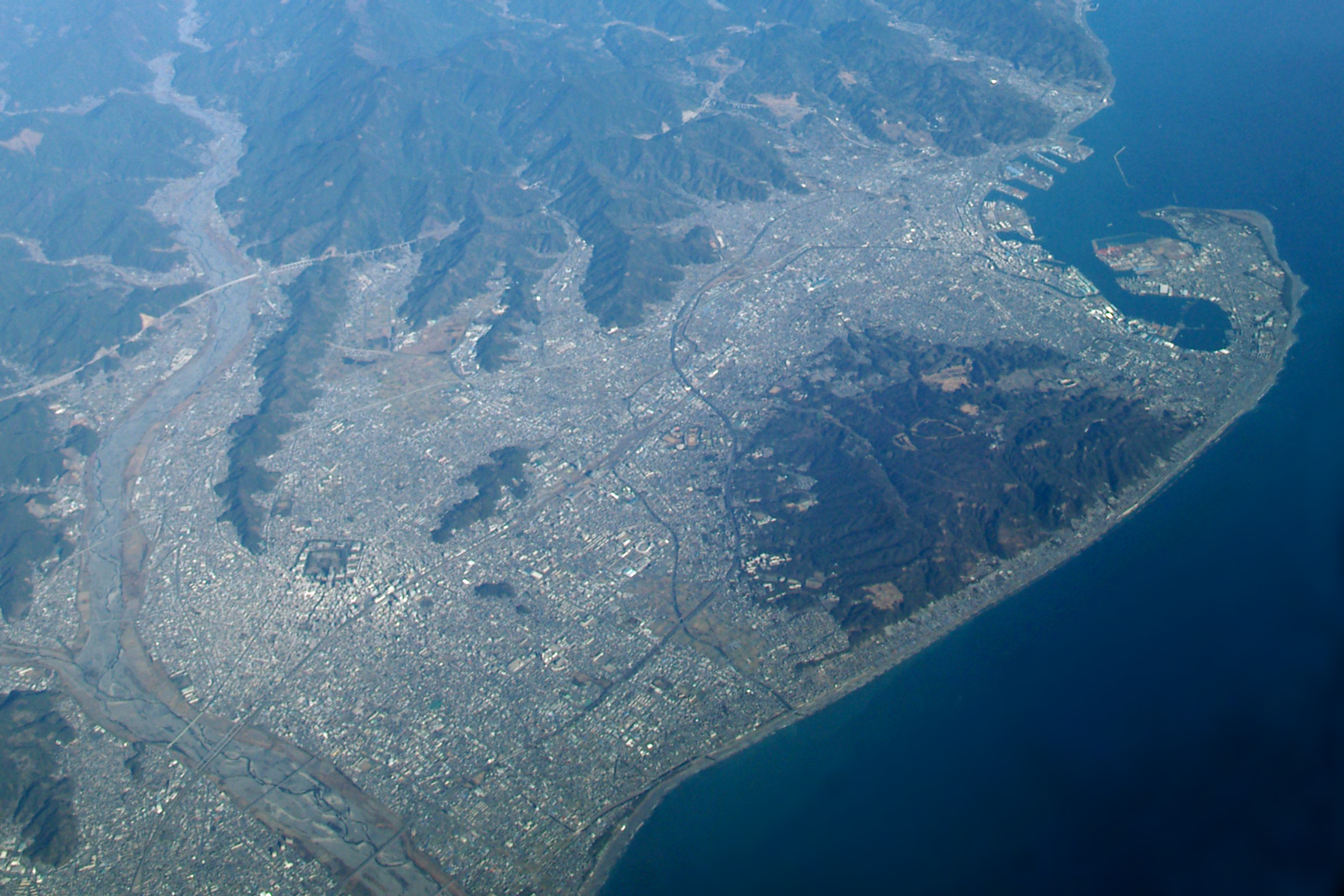 Per Japanese census data, the population of Shizuoka has been declining slowly since 1990. 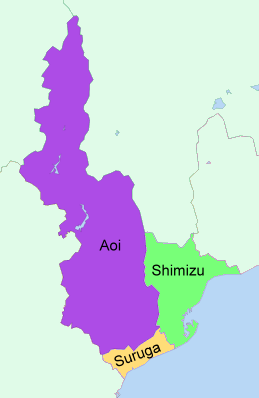 On 22 December 2006, colours and logos were established for each of the wards.

Shizuoka has a mayor-council form of government with a directly elected mayor and a unicameral city legislature of 48 members. The city contributes 13 members to the Shizuoka Prefectural Assembly. In terms of national politics, the city is divided between Shizuoka 1st District and Shizuoka 4th District in the lower house of the Japanese Diet.

The area that is now the city of Shizuoka has been inhabited since prehistoric times. Numerous kofun have been found within the city limits, and the Toro archaeological site indicates that a major Yayoi period (circa 400 BC–300 AD) settlement existed in what is now part of the central city area. Suruga was established as a province of Japan in the early Nara period. At some point between the year 701 and 710, the provincial capital was relocated from what is now Numazu, to a more central location on the banks of the Abe River at a location named (a contraction of ) or alternatively .

During the Muromachi period, Sunpu was the capital of the Imagawa clan. The Imagawa were defeated at the Battle of Okehazama, and Sunpu was subsequently ruled by Takeda Shingen, followed by Tokugawa Ieyasu. However, Toyotomi Hideyoshi relocated Ieyasu, and installed Nakamura Kazutada to rule Sunpu. After the Toyotomi were defeated in the Battle of Sekigahara, Ieyasu recovered Sunpu, reassigning it to his own retainer, Naitō Nobunari in 1601. This marked the start of Sunpu Domain.

In April 1606, Ieyasu officially retired from the post of ''shōgun'', and retired to Sunpu, where he established a secondary court, from which he could influence ''Shōgun'' Tokugawa Hidetada from behind the scenes. Subsequently, aside for brief periods, Sunpu was ''tenryō'' (territory under direct administration by the Shogunate), ruled by the , an appointed official based in Sunpu.

From the Meiji period to World War II

In 1869, after the fall of the Tokugawa shogunate, the former shogunal line, headed by Tokugawa Iesato was sent to Sunpu and assigned the short-lived Sunpu Domain. The same year, Sunpu was renamed "Shizuoka". Shizuoka Domain became Shizuoka Prefecture with the abolition of the han system in 1871, which was expanded in 1876 through merger with the former Hamamatsu Prefecture and western portions of Ashigaru Prefecture in 1876. Shizuoka Station on the Tōkaidō Main Line was opened on 1 February 1889. The same day, a fire burned down most of downtown Shizuoka. The modern city was founded on 1 April 1889. At the time, the population was 37,681, and Shizuoka was one of the first 31 cities established in Japan. An electric tram service began in 1911. In 1914, due to heavy rains caused by a typhoon, the Abe River flooded, inundating the downtown area. In the national census of 1920, the population of Shizuoka was 74,093. The area of the city continued to expand through the 1920s and 1930s through merger with outlying towns and villages. In 1935, the city was struck by a 6.4 magnitude earthquake, resulting in much damage. Although soon rebuilt, a large fire in 1940 again destroyed much of the center of the city. During World War II, Shizuoka lacked targets of major military significance, and was initially only lightly bombed during several American air raids. However, in a major firebombing raid of 19 June 1945, the city suffered an extreme amount of damage with high civilian casualties.

The area of the city continued to expand through the 1950s and 1960s through merger with outlying towns and villages. On 1 October 1964, the Tōkaidō Shinkansen began services to Shizuoka, and on 25 April 1969 the city was connected to the Tōmei Expressway. On 7 July 1974, the Abe River flooded, and landslides occurred during heavy rains, killing 23 people. On 16 August 1980, a major gas leak in an underground shopping center near Shizuoka Station resulted in an explosion, killing 15 people and seriously injuring 233 others. The Shizuoka City Hall moved to new premises in 1986. On 1 April 1992, Shizuoka was designated a core city by the central government, giving it increased autonomy. The 1 April 2003 merger with Shimizu City (current Shimizu Ward) greatly expanded the area and population of Shizuoka, which then became a designated city on 1 April 2005, and was divided into three wards. Despite being somewhat geographically isolated from the rest of the city, the town of Kanbara (from Haibara District) was merged into Shizuoka on 31 March 2006, becoming part of Shimizu Ward. On 1 November 2008, the town of Yui (also from Haibara District) was also merged into Shimizu Ward.