Click Here for Items Related To - Ship naming and launching


]] Ceremonial ship launching is the process of transferring a vessel to the water. It is a naval tradition in many cultures, dating back thousands of years. It has been observed as a public celebration and a solemn blessing. Ship launching imposes stresses on the ship not met during normal operation and, in addition to the size and weight of the vessel, represents a considerable engineering challenge as well as a public spectacle. The process also involves many traditions intended to invite good luck, such as christening by breaking a sacrificial bottle of champagne over the bow as the ship is named aloud and launched.

There are three principal methods of conveying a new ship from building site to water, only two of which are called "launching". The oldest, most familiar, and most widely used is the end-on launch, in which the vessel slides down an inclined slipway, usually stern first. With the side launch, the ship enters the water broadside. This method came into use in the 19th century on inland waters, rivers, and lakes, and was more widely adopted during World War II. The third method is float-out, used for ships that are built in basins or dry docks and then floated by admitting water into the dock. If launched in a restrictive waterway, drag chains are used to slow the ship speed to prevent it striking the opposite bank. 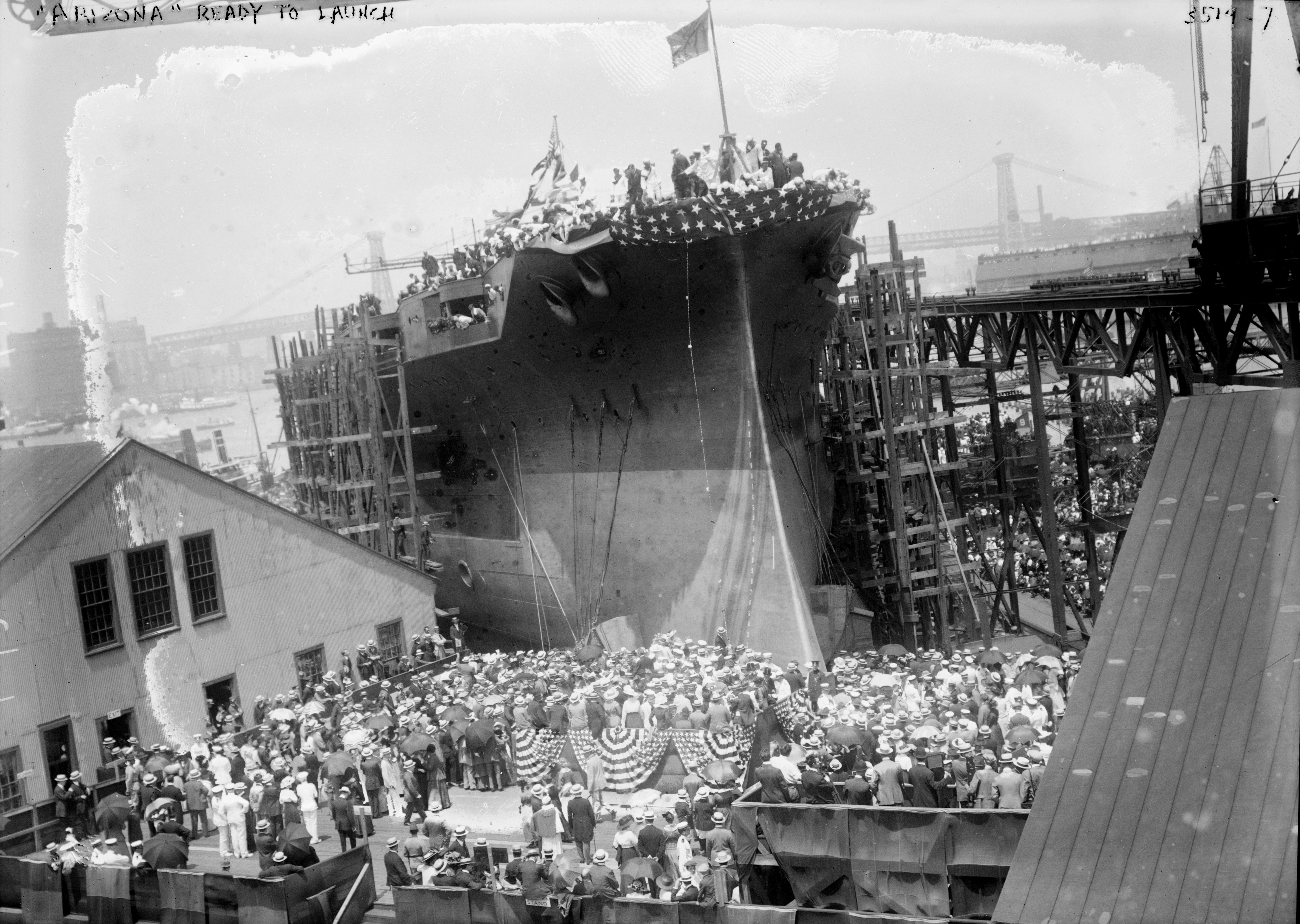 Normally, ways are arranged perpendicular to the shore line (or as nearly so as the water and maximum length of vessel allows) and the ship is built with its stern facing the water. Where the launch takes place into a narrow river, the building slips may be at a shallow angle rather than perpendicular, even though this requires a longer slipway when launching. Modern slipways take the form of a reinforced concrete mat of sufficient strength to support the vessel, with two "barricades" that extend well below the water level taking into account tidal variations. The barricades support the two launch ways. The vessel is built upon temporary cribbing that is arranged to give access to the hull's outer bottom and to allow the launchways to be erected under the complete hull. When it is time to prepare for launching, a pair of standing ways is erected under the hull and out onto the barricades. The surface of the ways is greased. (Tallow and whale oil were used as grease in sailing ship days.) A pair of sliding ways is placed on top, under the hull, and a launch cradle with bow and stern poppets is erected on these sliding ways. The weight of the hull is then transferred from the build cribbing onto the launch cradle. Provision is made to hold the vessel in place and then release it at the appropriate moment in the launching ceremony; common mechanisms include weak links designed to be cut at a signal and mechanical triggers controlled by a switch from the ceremonial platform. On launching, the vessel slides backwards down the slipway on the ways until it floats by itself.

Sometimes ships are launched using a series of inflated tubes underneath the hull, which deflate to cause a downward slope into the water. This procedure has the advantages of requiring less permanent infrastructure, risk, and cost. The airbags provide support to the hull of the ship and aid its launching motion into the water, thus this method is arguably safer than other options such as sideways launching. These airbags are usually cylindrical in shape with hemispherical heads at both ends. The Xiao Qinghe shipyard launched a tank barge with marine airbags on January 20, 1981, the first known use of marine airbags. 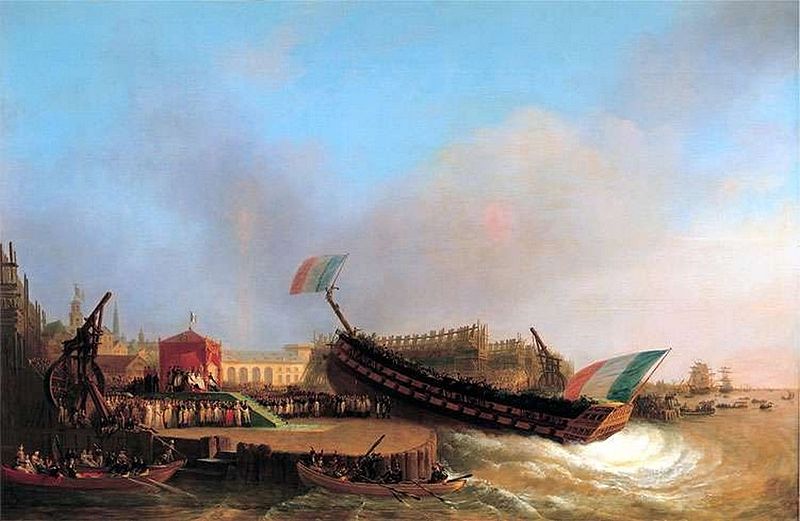 A Babylonian narrative dating from the 3rd millennium BC describes the completion of a ship:

Openings to the water I stopped;
I searched for cracks and the wanting parts I fixed:
Three ''sari'' of bitumen I poured over the outside;
To the gods I caused oxen to be sacrificed.

Egyptians, Greeks, and Romans called on their gods to protect seamen. Favor was evoked from the monarch of the seas—Poseidon in Greek mythology, Neptune in Roman mythology. Ship launching participants in ancient Greece wreathed their heads with olive branches, drank wine to honor the gods, and poured water on the new vessel as a symbol of blessing. Shrines were carried on board Greek and Roman ships, and this practice extended into the Middle Ages. The shrine was usually placed at the quarterdeck, an area which continues to have special ceremonial significance. Different peoples and cultures shaped the religious ceremonies surrounding a ship launching. Jews and Christians customarily used wine and water as they called upon God to safeguard them at sea. Intercession of the saints and the blessing of the church were asked by Christians. Ship launchings in the Ottoman Empire were accompanied by prayers to Allah, the sacrifice of sheep, and appropriate feasting. Chaplain Henry Teonge of Britain's Royal Navy left an interesting account of a warship launch, a "briganteen of 23 oars," by the Knights of Malta in 1675:

Two friars and an attendant went into the vessel, and kneeling down prayed halfe an houre, and layd their hands on every mast, and other places of the vessel, and sprinkled her all over with holy water. Then they came out and hoysted a pendent to signify she was a man of war; then at once thrust her into the water.

The liturgical aspects of ship christenings, or baptisms, continued in Catholic countries, while the Reformation seems to have put a stop to them for a time in Protestant Europe. By the 17th century, for example, English launchings were secular affairs. The christening party for the launch of the 64-gun ship of the line in 1610 included the Prince of Wales and famed naval constructor Phineas Pett, who was master shipwright at the Woolwich yard. Pett described the proceedings: The "standing cup" was a large cup fashioned of precious metal. When the ship began to slide down the ways, the presiding official took a ceremonial sip of wine from the cup, and poured the rest on the deck or over the bow. Usually the cup was thrown overboard and belonged to the lucky retriever. As navies grew larger and launchings more frequent, economy dictated that the costly cup be caught in a net for reuse at other launchings. Late in 17th century Britain, the standing-cup ceremony was replaced by the practice of breaking a bottle across the bow.

Launching could be said to mark the birth of a vessel; and people throughout history have performed launching ceremonies, in part to appeal for good fortune and the safety of each new vessel.

In Canada, Aboriginal peoples will perform ceremonies at the launching of vessels along with other methods of launching.

French ship launchings and christenings in the 18th and early 19th centuries were accompanied by unique rites closely resembling marriage and baptismal ceremonies. A godfather for the new ship presented a godmother with a bouquet of flowers as both said the ship's name. No bottle was broken, but a priest pronounced the vessel's name and blessed it with holy water.

In India, ships have historically been launched with a Puja ceremony that dedicates the ship to a Hindu god or goddess, and seeks blessings for her and her sailors. Historically, Hindu priests would perform the ''puja'' ceremony at launch. In the 20th century, ships are launched with a lady breaking a coconut on the bow of the vessel, which is sometimes followed by a small Puja.