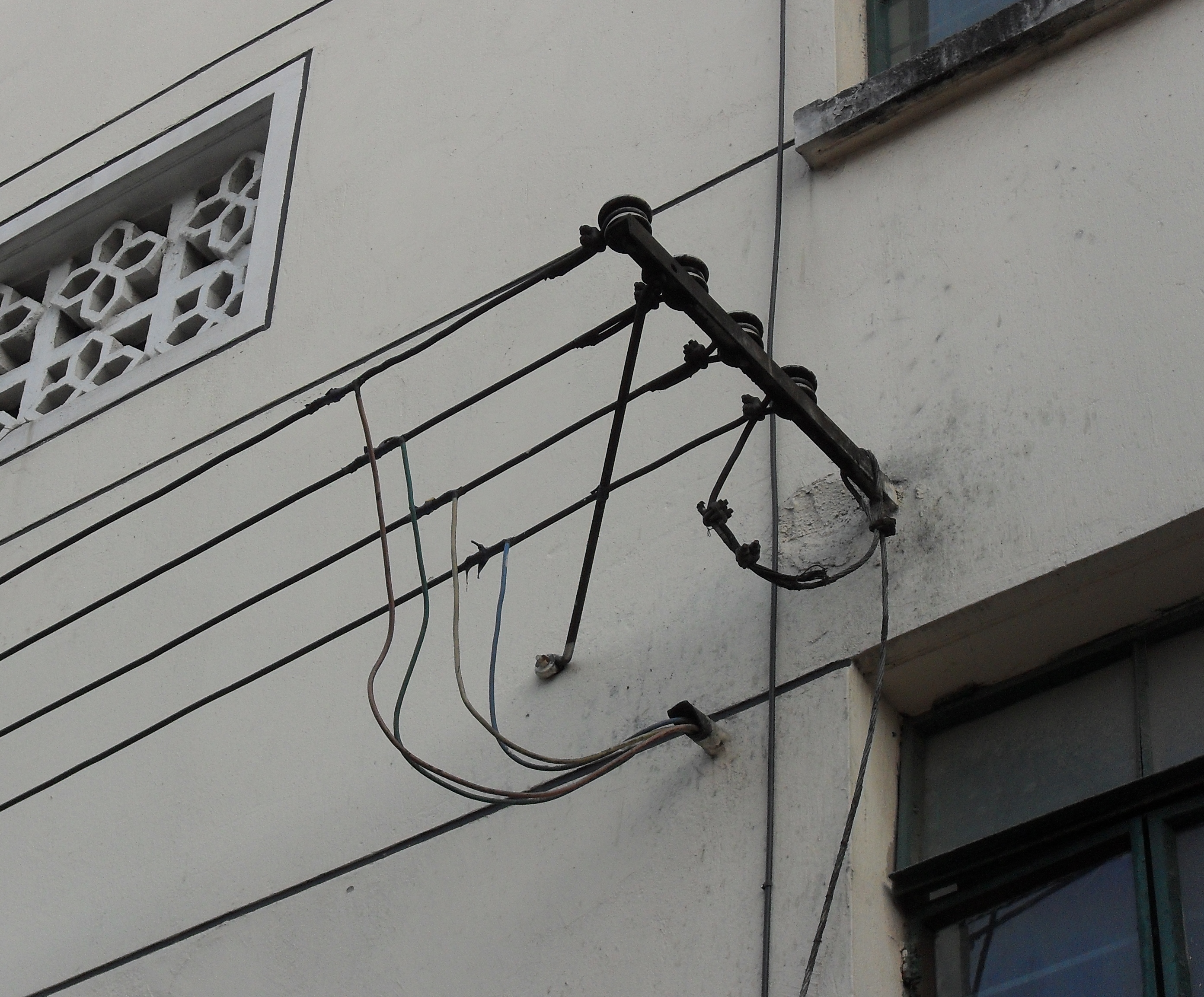 In electric power distribution, a service drop is an overhead electrical line running from a utility pole, to a customer's building or other premises. It is the point where electric utilities provide power to their customers. The customer connection to an underground distribution system is usually called a "service lateral". Conductors of a service drop or lateral are usually owned and maintained by the utility company, but some industrial drops are installed and owned by the customer. At the customer's premises, the wires usually enter the building through a weatherhead that protects against entry of rain and snow, and drop down through conduit to an electric meter which measures and records the power used for billing purposes, then enters the main service panel. The utility's portion of the system ends, and the customer's wiring begins, at the output socket of the electric meter. The service panel will contain a "main" fuse or circuit breaker, which controls all of the electric current entering the building at once, and a number of smaller fuses/breakers, which protect individual branch circuits. There is always provision for all power to be cut off by operating either a single switch or small number of switches (maximum of six in the United States, for example); when circuit breakers are used this is provided by the main circuit breaker. 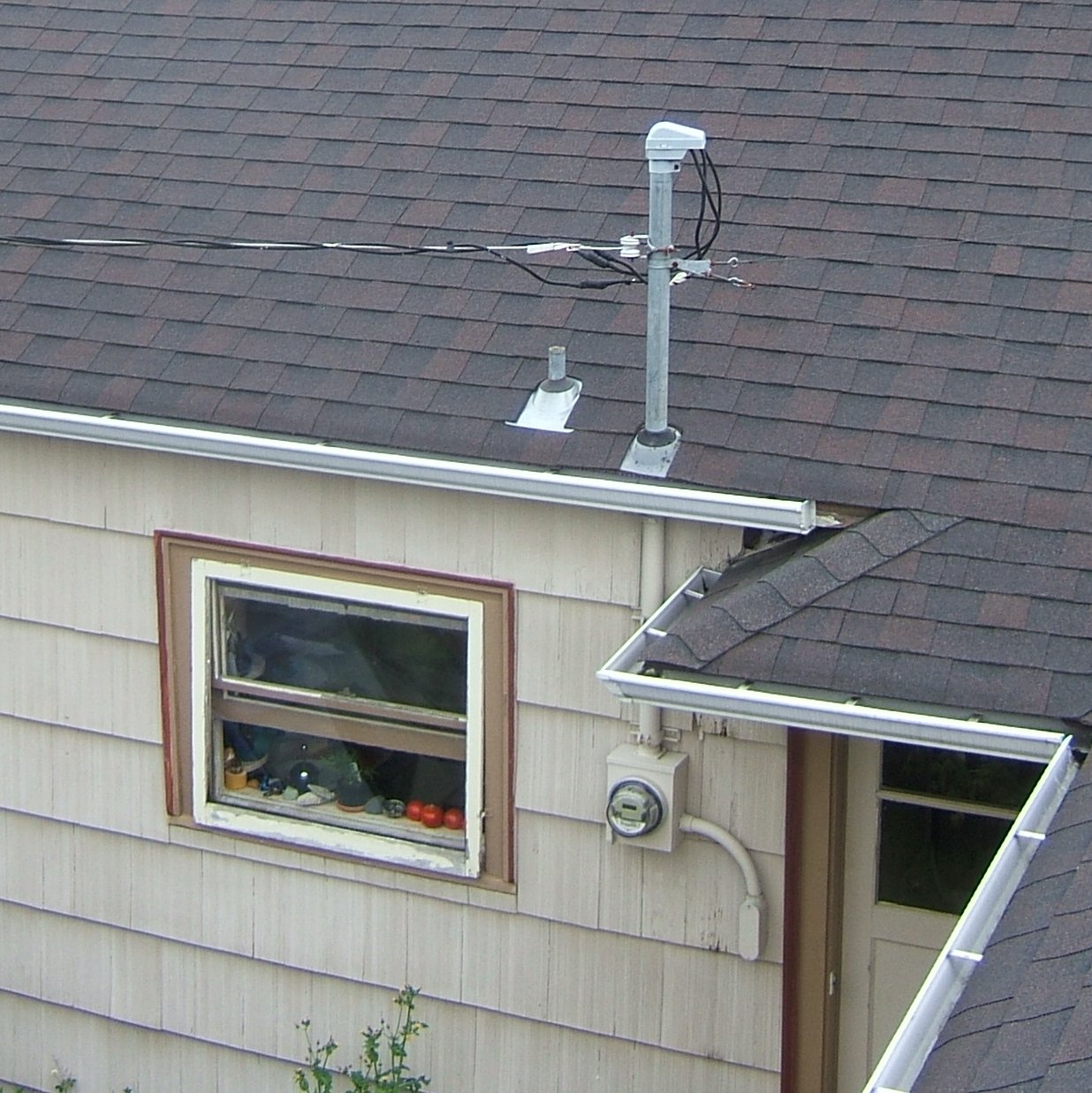 In North America , the 120/240 V split phase system is used for residential service drops. A pole-mounted single phase distribution transformer usually provides power for one or two residences. The secondary winding of the transformer provides 240 volts between its ends and is center tapped. The service drop is made up of a neutral line connected to the transformer's center tap and two lines connected to the ends of the winding which provide 120V with respect to the neutral line. When these lines are insulated and twisted together, they are referred to as a triplex cable which may contain a supporting messenger cable in the middle of the neutral conductor to provide strength for long spans. The neutral line from the pole is connected to a ground near the service panel; often a conductive rod driven into the earth. The service drop provides the building with two 120 V lines of opposite phase, so 240 V can be obtained by connecting a load between the two 120 V conductors, while 120 V loads are connected between either of the two 120 V lines and the neutral line. 240 V circuits are used for high-demand devices, such as air conditioners, water heaters, clothes dryers, ovens and boilers, while 120 V circuits are used for lighter loads such as lighting and ordinary small appliance outlets.

In many European countries and other countries that use European systems, three-phase service drops are often used for domestic residences. The use of three-phase power allows longer service drops to serve multiple residences, which is economical with the higher density of housing in Europe. The service drop consists of three phase wires and a neutral wire which is grounded. Each phase wire provides around 230 V to loads connected between it and the neutral. Each of the phase wires carries 50 Hz alternating current which is 120° out of phase with the other two. Several slightly different voltage standards have been used in the past as well: 220Y380, 230Y400 and 240Y415, with plans for future "harmonization" towards 230Y400. In this notation, the first number is the voltage between a phase wire and neutral, and the second number, after the "Y", is the line voltage (between any two-phase wires). Other countries, such as the UK and Republic of Ireland, generally provide a single phase and neutral per house, with every third house on the same phase. In this case the available current is higher. Single-phase supplies with a supplier's fuse of up to 100 A are common, while the 3-phase domestic supplies are generally of lower current rating (often less than 50 A) per phase.

Service conductors for a customer may be run underground, from a padmount transformer to a customer's meter.