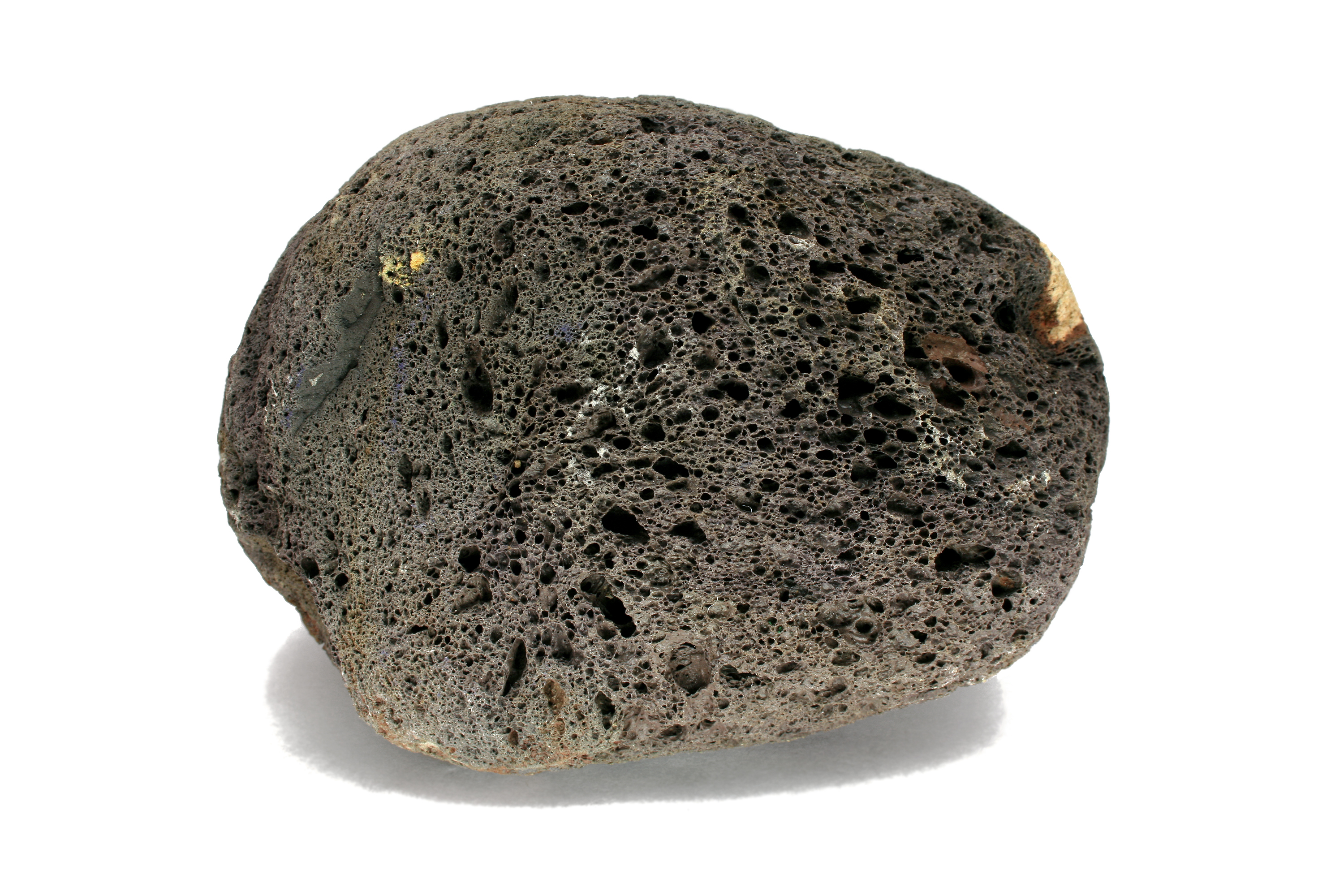 Scoria is a highly vesicular, dark-colored volcanic rock that may or may not contain crystals (phenocrysts). It is typically dark in color (generally dark brown, black or purplish red), and basaltic or andesitic in composition. Scoria is relatively low in density as a result of its numerous macroscopic ellipsoidal vesicles, but in contrast to pumice, all scoria has a specific gravity greater than 1, and sinks in water. The holes or vesicles form when gases that were dissolved in the magma come out of solution as it erupts, creating bubbles in the molten rock, some of which are frozen in place as the rock cools and solidifies. Scoria may form as part of a lava flow, typically near its surface, or as fragmental ejecta (lapilli, blocks and bombs), for instance in Strombolian eruptions that form steep-sided scoria cones. Chemical analysis of scoria found in Yemen showed that it was mainly composed of volcanic glass with a few zeolites (e.g. clinoptilolite). Most scoria is composed of glassy fragments, and may contain phenocrysts. The word ''scoria'' comes from the Greek σκωρία, ''skōria'', rust. A colloquial term for scoria is cinder.

Scoria differs from pumice, another vesicular volcanic rock, in having larger vesicles and thicker vesicle walls, and hence is denser. The difference is probably the result of lower magma viscosity, allowing rapid volatile diffusion, bubble growth, coalescence, and bursting.

As rising magma encounters lower pressures, dissolved gases are able to exsolve and form vesicles. Some of the vesicles are trapped when the magma chills and solidifies. Vesicles are usually small, spheroidal and do not impinge upon one another; instead they open into one another with little distortion. Volcanic cones of scoria can be left behind after eruptions, usually forming mountains with a crater at the summit. An example is Maungarei in Auckland, New Zealand, which like Te Tatua-a-Riukiuta in the south of the same city has been extensively quarried. Quincan, a unique form of Scoria, is quarried at Mount Quincan in Far North Queensland, Australia.

Scoria has several useful characteristics that influence how it is used. It is somewhat porous, has a high surface area and strength for its weight, and often has striking colours. Consequently, it is often used in landscaping and drainage works. It is also commonly used in gas barbecue grills.