Sanya (), also spelled as Samah is the southernmost city on Hainan Island, and one of the four prefecture-level cities of Hainan Province, in Southeast China. According to the 2010 Census, the population of Sanya is of 685,408 inhabitants, living in an area of . The city is renowned for its tropical climate and has emerged as a popular tourist destination, also serving as the training site of the Chinese national beach volleyball team. Sanya is also home to concentrations of the Austronesian Utsul people.

Known in ancient times as Yazhou, postal romanization: Aichow (), literally "cliff state or prefecture", Sanya's history dates to the Qin Dynasty (221–206 BCE). Due to its remoteness from the political centers during the Imperial China eras on Mainland China, Sanya was sometimes called ''Tianya Haijiao'' (), meaning "the end of the sky and ocean" or "the end of the earth". As a result, the city served as a place of exile for officials who found themselves out of favor with the country's rulers. During the Tang dynasty, the Buddhist monk Jianzhen accidentally landed here, using the site as a staging post on his missionary journey to Japan.

In 1912, Yazhou became Yaxian (Yai-hsien) (; postal: Aihsien). Japan then occupied the area during the Second Sino-Japanese War (19371945) and the city then became a naval port for the Second Fleet of the Imperial Japanese Navy and the main embarkation point for the Japanese Invasion of Malaya and Thailand. In April 1950, the People's Liberation Army took over Yaxian County and established a People's Government. In October 1954, the administration of the CPC Yaxian Committee relocated from Yacheng to Sanya then in 1958, administration of Yaxian relocated from Yacheng to Sanya and Yaxian merged with Baoting, Lingshui, Niulou, and Xinglong, Wanning, to become a large county. In 1959 and 1961 these areas were separated to establish Baoting and Lingshui while Yaxian County remained in its current prefecture. Approved by the State Council of China, Yaxian was upgraded to Sanya City on September26, 1987 and on December30, Sanya City was officially established. In 2007 the Beijing Olympic Organizing Committee announced that the city of Sanya would become the first leg of the Beijing 2008 Summer Olympics torch relay in China. In the 21st century Sanya's strategic importance has grown for the Chinese military and is home to several navy bases that help develop and protect the internationally disputed shoals and islands in the South China Sea.

Sanya lies at the southern tip of Hainan Island on Sanya Bay, and, after Sansha (also administered by Hainan Province), is the second-southernmost prefecture-level city nationally. Located at 18° 15' N latitude, it is about as far north of the Equator as the Island of Hawaii is. Though the administrative area (Sanya City) has a rough topography, the city itself is generally flat, lying on a parcel of land between low-level mountains to the north and the South China Sea.

The area has a tropical wet and dry climate (Köppen ''Aw''), featuring very warm weather all year around. Monsoonal influences are strong, with a relatively lengthy wet season and a pronounced dry season. The coolest month is January, at , while the hottest, unlike much of the rest of China, is June, at ; the annual mean is . Water temperatures remain above year-round.

Before July 30, 2014, there were direct jurisdiction over four county-level districts and two township-level subdistricts (), six towns () and four state-run farms in Sanya City. Now there are four districts in Sanya.

In recent years Sanya has become a popular tourist destination. Numerous international hotel chains are now established in the area. In 2009 the luxury Mandarin Oriental hotel group opened in the Dadong Hai area of Sanya, their first property in mainland China. There are now over 100 hotels, ranging from international brands to locally managed resorts. Russian and English signs can be seen throughout the city. Restaurants in Sanya are also infamous for over-charging tourists (whether foreign or Chinese). However, due to the recent exposure of this practice posted on the micro-blogging site Sina Weibo, Hainan government officials and Sanya city officials have vowed to crack down on this practice. The Sanya Industrial and Commercial Bureau has also begun to implement an open and transparent real-time information system of the city's seafood restaurants during the May Day holiday for public supervision in order to stop any future price gouging by restaurants. Sanya is facing a few challenges as it continues to expand at such a rapid rate: lack of infrastructure to support tourism, difficulty in reaching the location due to limited flights and airport capacity, noise pollution, traffic and road safety, pollution of the beaches and, most importantly, shortage of quality hospitality talent. Nature reserves of Yalong Bay Tropical Paradise Forest Park () and Sanya Coral Reef National Nature Reserve () are located nearby Yalong Bay, and Yalong Bay National Tourism Holiday Resort was created. In recent years, as the waters of Sanya Bay and others below mentioned are becoming clearer and healthier, several species of dolphins, including endangered Chinese white dolphins, appear along the coasts from time to time. However, they have not been considered as targeted tourism attractions. 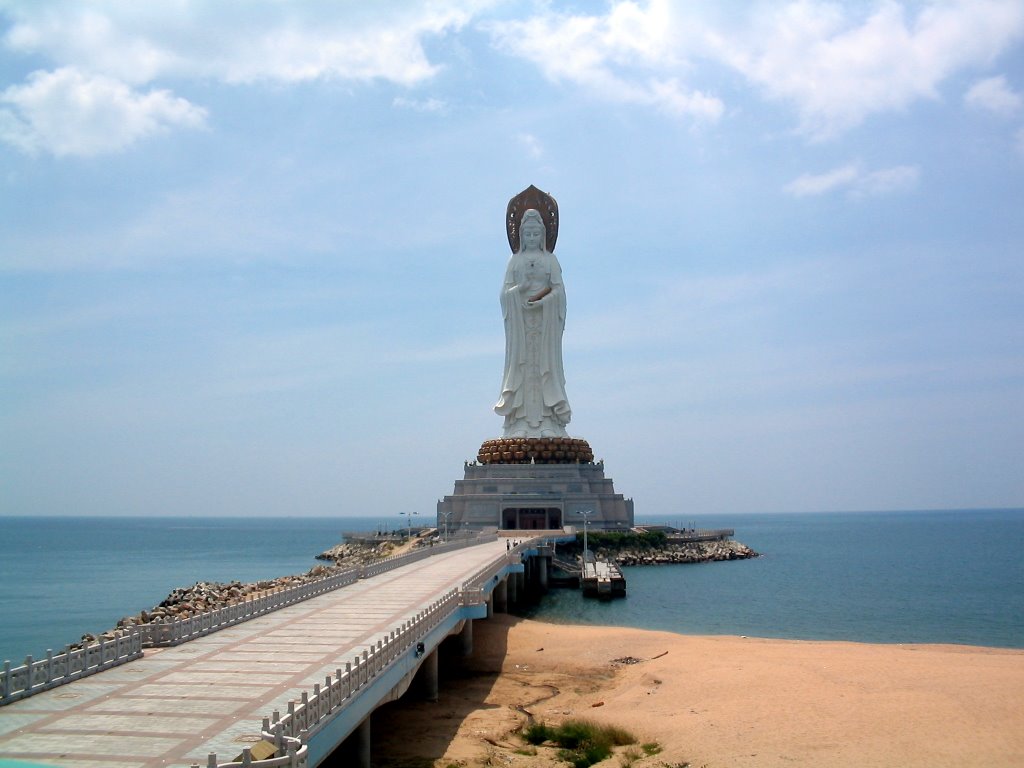 thumb|Yalong Bay * The Guan Yin of the South Sea of Sanya, a Buddhist statue, completed in May 2005 and one of the tallest statues in the world and the adjoining Nanshan Temple. * Yalong Bay, a major tourist beach located east of the urban area. * Tianya Haijiao (The ends of the earth and the corners of the sea) * Deer Turning Head Park (Luhuitou Park ) - A park containing a large stone statue above Sanya harbour telling the story of a hunter pursuing a deer to an isolated headland near the sea. When the deer could not escape, it turned to look at the hunter and became a beautiful woman. The hunter could not kill the deer and instead fell in love with her. People leave a padlock on a chain at the top of the mountain in the hope that their love will last as long as the lock remains. * Dadonghai, Sanya, Haitang, and Yazhou, and Xiangshuiwan Bay are the five major bays in Sanya, Xiangshuiwan Bay remains the most beautiful and natural near the famous Nuilin Mountain. * Butterfly Valley () and a shell aquarium. Other attractions include: *Phoenix Island, an artificial archipelago resort Sanya Bay * Wuzhizhou Island * West Island () * Daxiao Dongtian (), also known as the Fairy Caves * The Tiger and Crocodile centre. * Nanshan Temple * Luobi Cave, an ancient karst cave north of Sanya * Lingshui/Xiangshui Li'an Ocean Harbor Theme Park is projected for 2013. It will be the largest water park in Asia

The city is served by Sanya Phoenix International Airport. Taxis are available throughout the city. Buses from other parts of Hainan serve Sanya's bus terminal. The No. 8 bus connects the airport to Dadonghai Beach. From there tourists can take the 24 or 25 bus to Yalong Bay or the 28 bus to Haitang Bay. There is also a free bus from Luhuitou Square to the Duty-Free Shopping Center at Haitang Bay, the largest such center in China.

The Hainan East Ring Intercity Rail links Sanya and Haikou and runs along the east coast of Hainan Island. There are 15 stations in between, either in operation or still under construction. Trains are designed to travel at . Travel time from Sanya to Haikou is approximately 1 hour and 22 minutes. The Hainan Western Ring High-Speed Railway, running along the west coast of the province also links Sanya to Haikou. 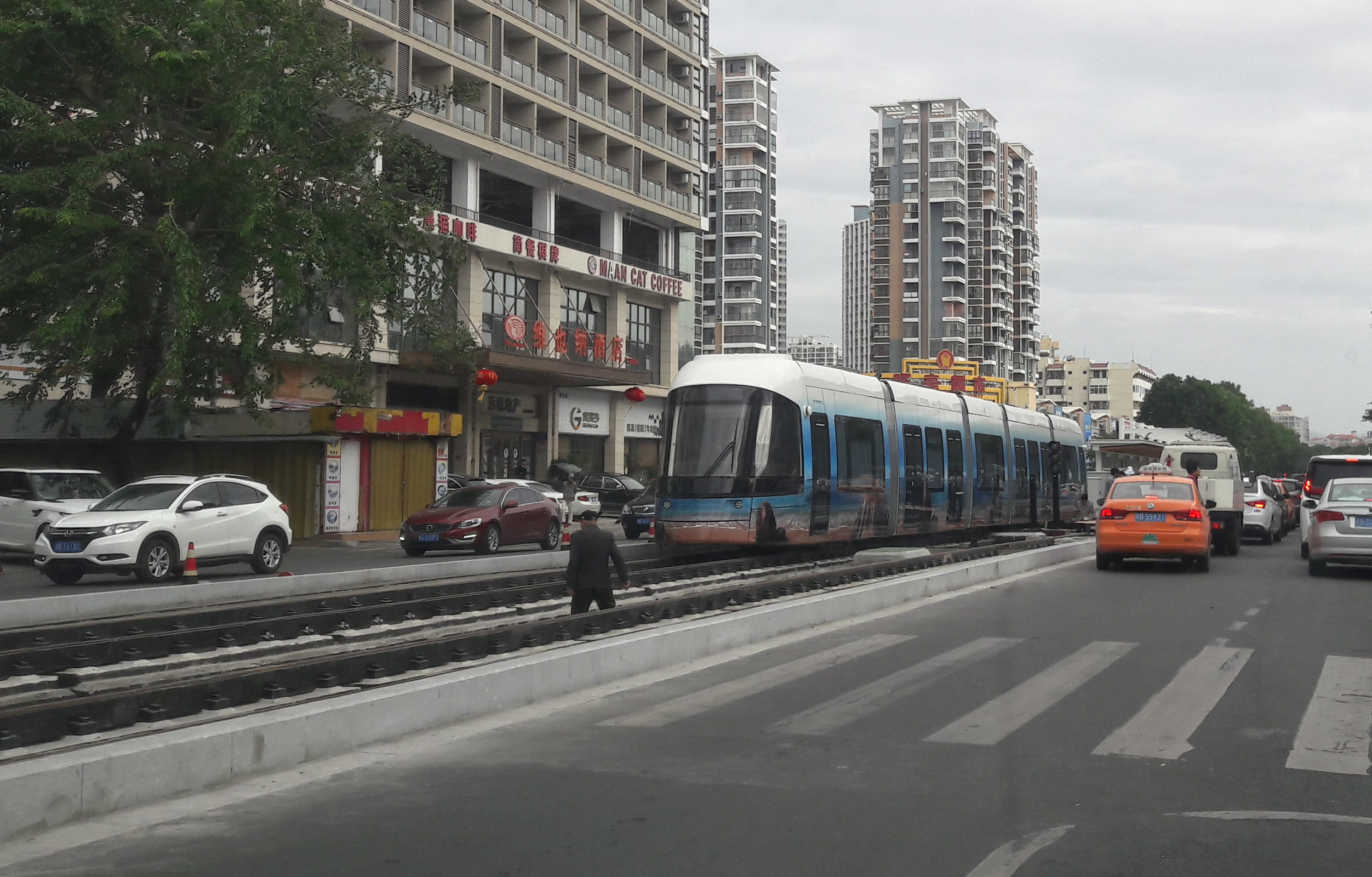 Sanya's tram service began trial operation on 7 January 2019. Trams are composed of five carriages with a maximum seating capacity of 362 people. In built up and urbanised areas, the maximum speed of the tram is 50 km/h. The current tram route begins at Sanya Railway Station and finishes at Jiankang Road Station. Full operation of the first line started on 10 October 2020.

There are a total of 54 hospitals in Sanya as of March 2019, both public hospitals funded by the state and private hospitals. And numerous clinics for doing annual health-checks, which are usually brands of national chains in China, such as Ciming Healthcheck. Hainan 301 Hospital, a branch hospital of People's Liberation Army General Hospital, is located in the Haitang Bay area of Sanya. The hospital possesses a substantial number of state-of-the-art equipment for medical and research purposes which include a Da Vinci surgical system, different MIR system (including 1.5T MRI 3.0T MRI), Helical CT facilities (including 128-Slices CT), medical linear accelerator and electronic microscopes which are worth more than 450 million yuan. The hospital has 500 patient beds, and a total of 74 clinical, medical and nursing departments. Sanya Traditional Chinese Medicine Hospital () is located on Fenghuang Road. It is a grade-A tertiary hospital offering medical care, education, research, healthcare services and International Chinese Medicine exchange and cooperation.

The city government states on its website that "Being the second-largest city in Hainan, the education in Sanya is relatively better than the average level in Hainan Province" but that the kindergartens are not as good as those in major Chinese cities and that the primary and secondary schools are still below the Chinese national average. According to the city government, Primary schools No.7 and No.9 Primary School are the best ones in the city and that Bayi Primary School "is also of good quality".