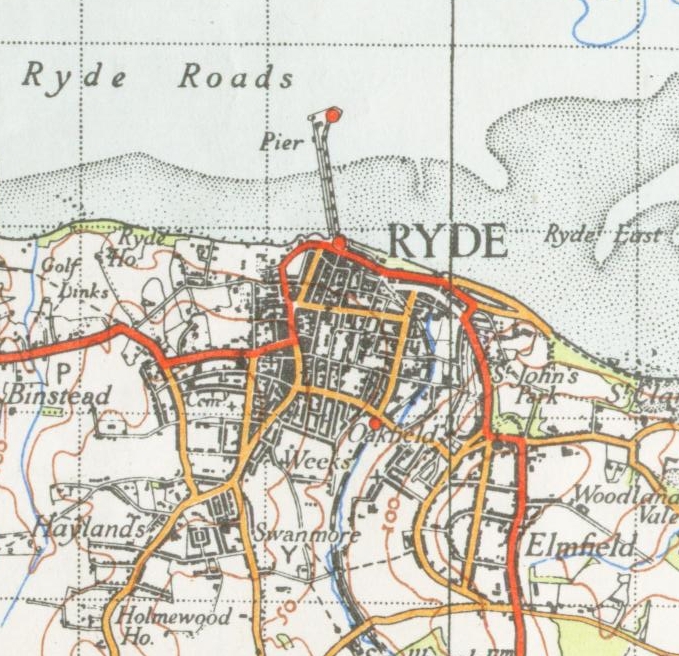 Ryde Pier Head railway station is one of three stations in the town of Ryde on the Isle of Wight. Situated at the end of the town's pier, it is adjacent to the terminal for the Wightlink fast catamaran service connecting the island with Portsmouth on the English mainland. Passengers can use this to connect with the rest of the National Rail network at Portsmouth Harbour station, which is adjacent to the Portsmouth terminal. Through rail tickets for travel via Pier Head station are available to and from other stations on the Isle of Wight. These include travel on the catamaran service to or from Portsmouth as appropriate. Trains run down the eastern coast of the Isle of Wight to Shanklin (the Island Line), the last remnant of a network of railways on the island. Because of the restricted loading gauge, particularly through the tunnel under Ryde, services are operated by Class 483s (London Underground 1938 Stock). The ticket office at the station is run by Wightlink and not Island Line.

In 1880 the London and South Western Railway (LSWR) and London, Brighton and South Coast Railway (LBSCR) agreed to open a jointly-owned line north from Ryde St John's Road. Under the direction of LBSCR Chief Engineer Frederick Banister, the construction of the extension included a new tunnel and a third Ryde Pier to enable the line to reach a new station at Ryde Pier Head, which provided a connection with the companies' ferry services. When the LBSC/LSWR joint line opened, it was as a double track section from Ryde St John's Road station through to Ryde Pier Head. There was a scissors crossover situated on Ryde Pier to allow trains to access all platforms. Sets of crossovers were installed at St John's Road to enable trains to change from the joint line's left-hand running to the single-track sections on the Isle of Wight Central Railway's Newport line and the Isle of Wight Railway's Shanklin line (now known as the Island Line). The station originally consisted of three platforms in the form of a pair of islands; a fourth track was added later, opening in 1933. The station was rebuilt on electrification of the remaining line in 1967, and the new layout consisted of two tracks with three platform faces. One of these tracks is now out of use, so only one platform currently operates. This is the track which runs along the western side of the pier; a double track section commences immediately to the south of Ryde Esplanade railway station. As of May 2019, the condition of some of the station buildings led to criticism that it was not a sufficiently welcoming sight for visitors to the island. There were also significant concerns that the age and condition of the Victorian railway pier would mean the line between the Esplanade and Pier Head might have to be abandoned, as it was not seen as economical to renew the pier based on passenger numbers. However, noting that if the pier railway were to close the rest of the Island Line would serve little purpose and therefore also likely close, Network Rail have agreed to fund £5m worth of renewal work on the pier, as the government makes a £26m investment in new trains and track for the route. From 2021 onward, the Pier Head (and the rest of the Island Line) will be served by new Vivarail D-Train Class 484 EMUs, converted from London Underground D78 Stock.

Trains run to Shanklin twice per hour during most of the day. This is reduced to hourly on Sunday mornings off-season, very early mornings and late evenings. Certain trains only travel as far as St John's Road. There are no overnight trains. Because of the location of passing loops on the Island Line, services run at 20/40 minute intervals. Wightlink passenger ferry services run every 30 minutes for most of the day, but are reduced to hourly intervals in the early afternoons and off-season Sunday mornings.