Roman concrete, also called ''opus caementicium'', was a material used in construction in Ancient Rome. Roman concrete was based on a hydraulic-setting cement. It is durable due to its incorporation of pozzolanic ash, which prevents cracks from spreading. By the middle of the 1st century, the material was used frequently, often brick-faced, although variations in aggregate allowed different arrangements of materials. Further innovative developments in the material, called the concrete revolution, contributed to structurally complicated forms, such as the Pantheon dome, the world's largest and oldest unreinforced concrete dome. Roman concrete was normally faced with stone or brick, and interiors might be further decorated by stucco, fresco paintings, or thin slabs of fancy colored marbles. Made up of aggregate and a two-part cementitious system it differs significantly from modern concrete. The aggregates were typically far larger than in modern concrete as well, often amounting to rubble, and as a result it was laid rather than poured. Some Roman concretes were able to be set underwater, which was useful for bridges and other waterside construction. It is uncertain when Roman concrete was developed, but it was clearly in widespread and customary use from about 150 BC; some scholars believe it was developed a century before that.

Vitruvius, writing around 25 BC in his ''Ten Books on Architecture'', distinguished types of aggregate appropriate for the preparation of lime mortars. For structural mortars, he recommended pozzolana (''pulvis puteolanus'' in Latin), the volcanic sand from the beds of Pozzuoli, which are brownish-yellow-gray in color in that area around Naples, and reddish-brown near Rome. Vitruvius specifies a ratio of 1 part lime to 3 parts pozzolana for cement used in buildings and a 1:2 ratio of lime to pozzolana for underwater work, essentially the same ratio mixed today for concrete used in marine locations. By the middle of the first century, the principles of underwater construction in concrete were well known to Roman builders. The city of Caesarea was the earliest known example to have made use of underwater Roman concrete technology on such a large scale. For rebuilding Rome after the fire in 64 AD, which destroyed large portions of the city, Nero's new building code largely called for brick-faced concrete. This appears to have encouraged the development of the brick and concrete industries. 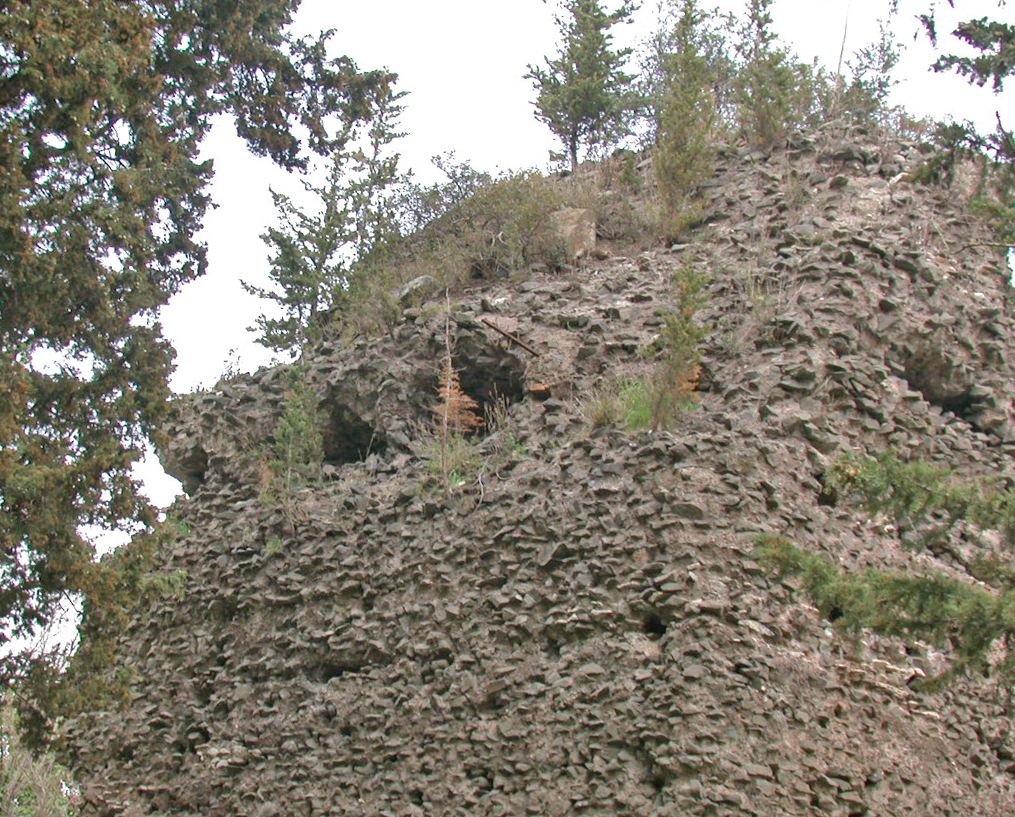 Roman concrete, like any concrete, consists of an aggregate and hydraulic mortar – a binder mixed with water that hardens over time. The aggregate varied, and included pieces of rock, ceramic tile, and brick rubble from the remains of previously demolished buildings. Gypsum and quicklime were used as binders. Volcanic dusts, called pozzolana or "pit sand", were favored where they could be obtained. Pozzolana makes the concrete more resistant to salt water than modern-day concrete. The pozzolanic mortar used had a high content of alumina and silica. Tuff was often used as an aggregate. Concrete, and in particular, the hydraulic mortar responsible for its cohesion, was a type of structural ceramic whose utility derived largely from its rheological plasticity in the paste state. The setting and hardening of hydraulic cements derived from hydration of materials and the subsequent chemical and physical interaction of these hydration products. This differed from the setting of slaked lime mortars, the most common cements of the pre-Roman world. Once set, Roman concrete exhibited little plasticity, although it retained some resistance to tensile stresses. The setting of pozzolanic cements has much in common with setting of their modern counterpart, Portland cement. The high silica composition of Roman pozzolana cements is very close to that of modern cement to which blast furnace slag, fly ash, or silica fume have been added. The strength and longevity of Roman ''marine'' concrete is understood to benefit from a reaction of seawater with a mixture of volcanic ash and quicklime to create a rare crystal called tobermorite, which may resist fracturing. As seawater percolated within the tiny cracks in the Roman concrete, it reacted with phillipsite naturally found in the volcanic rock and created aluminous tobermorite crystals. The result is a candidate for "the most durable building material in human history". In contrast, modern concrete exposed to saltwater deteriorates within decades.

Compressive strengths for modern Portland cements are typically at the level and have improved almost ten-fold since 1860. There are no comparable mechanical data for ancient mortars, although some information about tensile strength may be inferred from the cracking of Roman concrete domes. These tensile strengths vary substantially from the water/cement ratio used in the initial mix. At present, there is no way of ascertaining what water/cement ratios the Romans used, nor are there extensive data for the effects of this ratio on the strengths of pozzolanic cements.

For an environment as prone to earthquakes as the Italian peninsula, interruptions and internal constructions within walls and domes created discontinuities in the concrete mass. Portions of the building could then shift slightly when there was movement of the earth to accommodate such stresses, enhancing the overall strength of the structure. It was in this sense that bricks and concrete were flexible. It may have been precisely for this reason that, although many buildings sustained serious cracking from a variety of causes, they continue to stand to this day. Another technology used to improve the strength and stability of concrete was its gradation in domes. One example is the Pantheon, where the aggregate of the upper dome region consists of alternating layers of light tuff and pumice, giving the concrete a density of . The foundation of the structure used travertine as an aggregate, having a much higher density of .

Recent scientific breakthroughs examining Roman concrete have been gathering media and industry attention. Because of its unusual durability, longevity and lessened environmental footprint, corporations and municipalities are starting to explore the use of Roman-style concrete in North America, replacing the coal fly ash with volcanic ash that has similar properties. Proponents claim that concrete made with volcanic ash can cost up to 60% less because it requires less cement, and that it has a smaller environmental footprint due to its lower cooking temperature and much longer lifespan. Usable examples of Roman concrete exposed to harsh marine environments have been found to be 2000 years old with little or no wear.