The Rolls-Royce RB.80 Conway was the first turbofan engine to enter service. Development started at Rolls-Royce in the 1940s, but the design was used only briefly, in the late 1950s and early 1960s, before other turbofan designs replaced it. However, the Conway engine was used in versions of the Handley Page Victor, Vickers VC10, Boeing 707-420 and Douglas DC-8-40. The name "Conway" is the English spelling of the River Conwy, in Wales, in keeping with Rolls' use of river names for gas turbine engines.

In early jet engines, the exhaust was much faster and hotter than it had to be for efficient thrust, contrary to the ideal Froude efficiency. Capturing some of that energy would improve the fuel economy of the engine. The turboprop engine is an obvious example, which uses a series of additional turbine stages to capture the exhaust energy and power a propeller. However, there is a trade-off in propeller efficiency compared to forward speed, so turboprop engines are only efficient at speeds of up to . This means there is a sweet spot between the efficiencies of the turboprop at low speeds and the jet at high speeds that was not being directly tackled. This spot, between about and , was precisely where the vast majority of commercial jet aircraft spent most of their time. The basic concept of bypass had been studied from the earliest days of jet engine design. Alan Arnold Griffith had proposed a number of different bypass engine designs as early as the 1930s while he and Hayne Constant were trying to get their axial-flow jet engines working at the Royal Aircraft Establishment. Frank Whittle's Power Jets also studied a number of bypass configurations. However, the need to get jet engines into service during the war meant that work had to be put aside in favour of the simpler turbojet designs with shorter introduction times. Priorities changed dramatically at the end of the war and, by 1946, Rolls-Royce agreed that existing engines like the Rolls-Royce Avon were advanced enough to enable a start to work on more advanced concepts like bypass. In a bypass design some of the air from the compression system bypasses the hot core of the engine — the combustion chamber/s and turbine — and discharges usually through a separate secondary (cold) nozzle. Since the bypass section of the compression system places an additional load on the turbine system, the primary (hot) nozzle exhaust velocity is reduced. Both nozzles contribute to the Gross Thrust of the engine. The additional air for the bypass stream increases the Ram Drag in the air intake stream-tube, but there is still a significant increase in Net Thrust. Normally the bypass nozzle has a lower jet velocity than that of the primary nozzle, because it has a lower discharge temperature. An equivalent overall jet velocity can be computed knowing the airflow and thrust contribution of each nozzle. In some turbofans the two exhaust streams meet and are discharged through a single common nozzle. Now Froude, or Propulsive, Efficiency can be defined as: ηf = 2 / (1 + (Vj/Va)) So, if the thrust equivalent jet velocity (Vj), relative to the aircraft velocity (Va), decreases, the Froude Efficiency increases. This improves the Overall Thermal efficiency, resulting in a lower Specific Fuel Consumption. In addition to reducing fuel consumption compared with that of a simple turbojet, a beneficial side effect is that the core of hot gas from the jet exhaust is surrounded by a tube of colder, slower moving air, reducing noise. Rolls-Royce termed the design a ''Bypass Turbojet''. Griffith, who by then had become Chief Engineer at Rolls-Royce, suggested building a purely experimental bypass design using parts of the Avon and another experimental jet engine, the AJ.25 Tweed. In April 1947, a design was proposed, but over the next few months it was modified to evolve into a larger design in response to a need for a new engine to power the Mk.2 low-level version of the Vickers Valiant bomber. The go-ahead to start construction of this larger design was given in October, under the name RB.80.

During development it was decided to further improve the basic design by adding another feature then becoming common, a "two spool" compressor arrangement. Earlier engines generally consisted of a series of compressor stages connected via a shaft to one or more turbine stages, with the burners between them arranged around the shaft. Although this arrangement is mechanically simple, it has the disadvantage of lowering the efficiency of the compressor. Compressor stages run at their maximum efficiency when spinning at a specific speed for any given input air pressure - in a perfect compressor each stage would run at a separate speed. The multi-spool design, first used on the Bristol Olympus turbojet, is a compromise, the compressor being separated into "spools" designed to operate closer to most efficient speed, driven by separate turbines via concentric shafts. Two- and three-spool designs are common; beyond that the mechanical complexity is too great. The new version had a four-stage low-pressure compressor driven by a two-stage turbine and an eight stage high-pressure compressor driven by another two-stage turbine. Now known by the Ministry of Supply designation as the RCo.2, design work was completed in January 1950 and the first example ran for the first time in July 1952 at thrust. By this time, the low-level Valiant Pathfinder had been abandoned and so the first example was also destined to be the last. Nevertheless, it proved the basic concept sound and "ran perfectly for the whole of its 133 hours life." The work on the RCo.2 was soon put to good use. In October 1952, the Royal Air Force awarded a contract for the Vickers V-1000, a large jet-powered strategic transport that was intended to allow the V bomber force to be supported in the field through air supply only. Vickers also planned on developing a passenger version of the same basic design as the VC-7. The V-1000 design looked like an enlarged de Havilland Comet but from the Valiant it took the wing layout and added a compound sweep (a passing vogue in UK design). It also featured the Comet's wing-embedded engines, demanding an engine with a small cross-section, which limited the amount of bypass the engine could use. It nevertheless required higher power to support a gross weight, so Rolls responded with the larger RCo.5. The new engine was similar to the RCo.2 in most ways, differing in details. The low-pressure compressor now had six stages and the high-pressure nine, driven by two and one stage turbines respectively. The first RCo.5 ran in July 1953 and passed an official type rating in August 1955 at . Construction of the prototype V-1000 was well underway at Vickers Armstrong's Wisley works in the summer of 1955 when the entire project was cancelled. Having second thoughts about the concept of basing the V-bombers away from the UK, the need for the V-1000 became questionable and it became an easy decision to drop the project.

The Conway was saved once again when it was selected to power the Handley Page Victor B.2 variant, replacing the Armstrong Siddeley Sapphire used by earlier models. For this role, Rolls-Royce designed an even larger model, the RCo.8 of , which ran for the first time in January 1956. However the RCo.8 was skipped over after receiving a request from Trans-Canada Airlines (TCA) to explore a Conway-powered Boeing 707 or Douglas DC-8, having interested both companies in the idea. Rolls-Royce responded by designing an even larger model of the Conway, the RCo.10 and offering the similar military-rated RCo.11 for the Victor. The new engine differed from the RCo.8 in having a new "zeroth stage" at the front of the low-pressure compressor, further increasing cold airflow around the engine. The RCo.10 first flew in the modified prototype Avro Vulcan ''VX770'' on 9 August 1957 only for the aircraft to be lost in a crash the following year. The RCo.11 was flown in the Victor on 20 February 1959. Boeing calculated that the Conway with a bypass of only 30% would increase the proposed 707-420's range by 8% above the otherwise identical 707-320 powered by Pratt & Whitney JT4A (J75) turbojets. That estimate proved optimistic; the actual range improvement was a maximum of 2%. In May 1956, TCA ordered Conway-powered DC-8-40s, followed by additional orders from Alitalia and Canadian Pacific Air Lines, while the Conway-powered 707-420 was ordered by BOAC, Lufthansa, Varig, El Al and Air India. RCo.10's development was so smooth that after delivering a small number for testing, production deliveries switched to the RCo.12, which was designed, built and tested before the airframes finished testing. Boeing's 707-420 featured a distinctive, scalloped exhaust nozzle (pictured above) incorporating noise suppression and mechanical and aerodynamic thrust reversal up to 50%, which was developed and supplied by Rolls-Royce. Douglas developed the DC-8's reverser-suppressor nozzle to work in conjunction with a variable ejector, which provided necessary, additional noise suppression. Although successful in this role, only 37 707s and 32 DC-8s were fitted with the Conway, due largely to delivery of the first US-built bypass engine, the Pratt & Whitney JT3D. Nevertheless, the Conway was successful on those aircraft, and was the first commercial aero engine to be awarded an operational period of up to 10,000 hours between major overhauls. Due to the Conway, B707-420 take-offs were the loudest by jetliners on airports and over communities until Concorde entered service. However, the Conway was revolutionary, being the first turbofan, and the first commercial engine, equipped with internally air-cooled turbine blades, which partially accounted for its high efficiency and an extremely high exhaust temperature of .

Final development of the Conway first involved the RCo.42, designed specifically for the Vickers VC10. As the need for wing-embedded engines was long abandoned by this point, Rolls-Royce dramatically increased the zero-stage diameter to increase the bypass from about 30% to 60%. Other major revisions were incorporated, primarily in the low-pressure compressor. First run was in March 1961. Takeoff rating was . For the Super VC10, the last model was the RCo.43, rated at .

The RCo.12 Conway was an axial-flow turbofan with a low bypass of about 30% or bypass ratio of 0.3:1. It had a seven-stage low-pressure compressor, the first six stages made of aluminium and the last of titanium. Behind this was the nine-stage high-pressure compressor, the first seven stages of titanium and the last two of steel. The bypass housing duct was also made of titanium. The bypass duct started after the seventh stage. The combustion area consisted of ten cannular flame cans. The high-pressure compressor was driven by a single-stage turbine using hollow air-cooled blades, which was followed by the two-stage turbine powering the low-pressure compressor. Accessories were arranged around the front of the engine to minimise overall diameter. The RCo.12 produced for takeoff, weighed dry and had a specific fuel consumption of 0.725 at takeoff and 0.874 for typical cruise. In 1968, Hyfil carbon-fibre fan blades were installed on Conways of VC10s operated by BOAC.

In November 1966 the inlet to the Conway engine, together with those for commercial Avon and Spey installations, was the subject of a patent infringement against Rolls-Royce by Rateau, a French manufacturer of steam turbines and automobile superchargers, Société pour l’exploitation des appareils Rateau of La Courneuve. The patent stated that the intake, by its diffusing internal shape, determines the speed of the air entering the engine compressor. Since the Conway in the Boeing 707, and the other Rolls-Royce engines, had diffusing intakes Rateau expected to be compensated for every engine made, as well as stopping all future production. Although Rateau's claim was only against Rolls-Royce their understanding of the purpose of an intake applied to any jet engine installation. Witnesses for Rolls-Royce, including Frank Whittle, convinced the judge that an intake did not produce the effect claimed and that the claim was "speculative" because, by 1939, no axial-flow aircraft jet engine had been built and that earlier patents from Frank Whittle and others had already considered the design of the intakes. 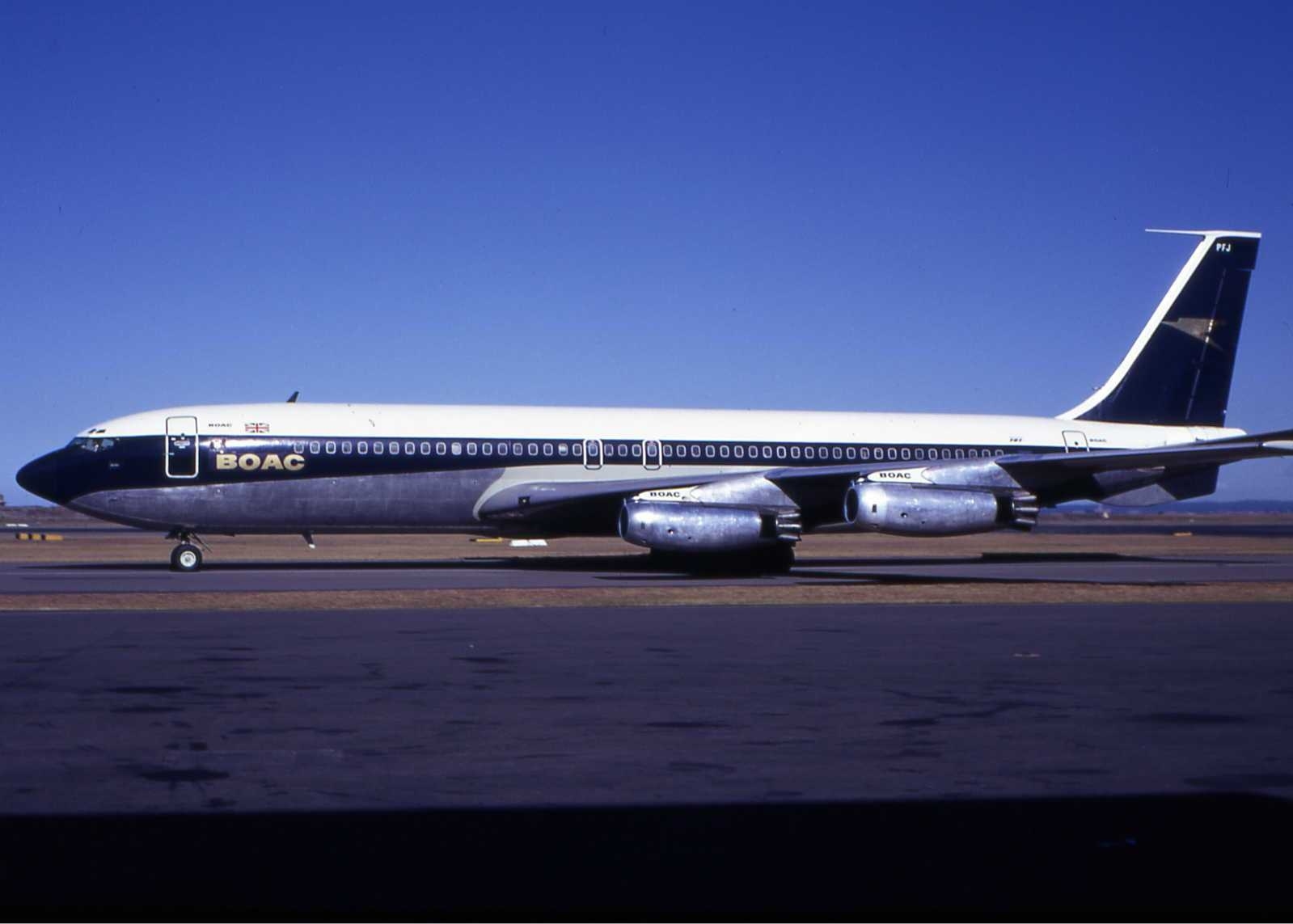 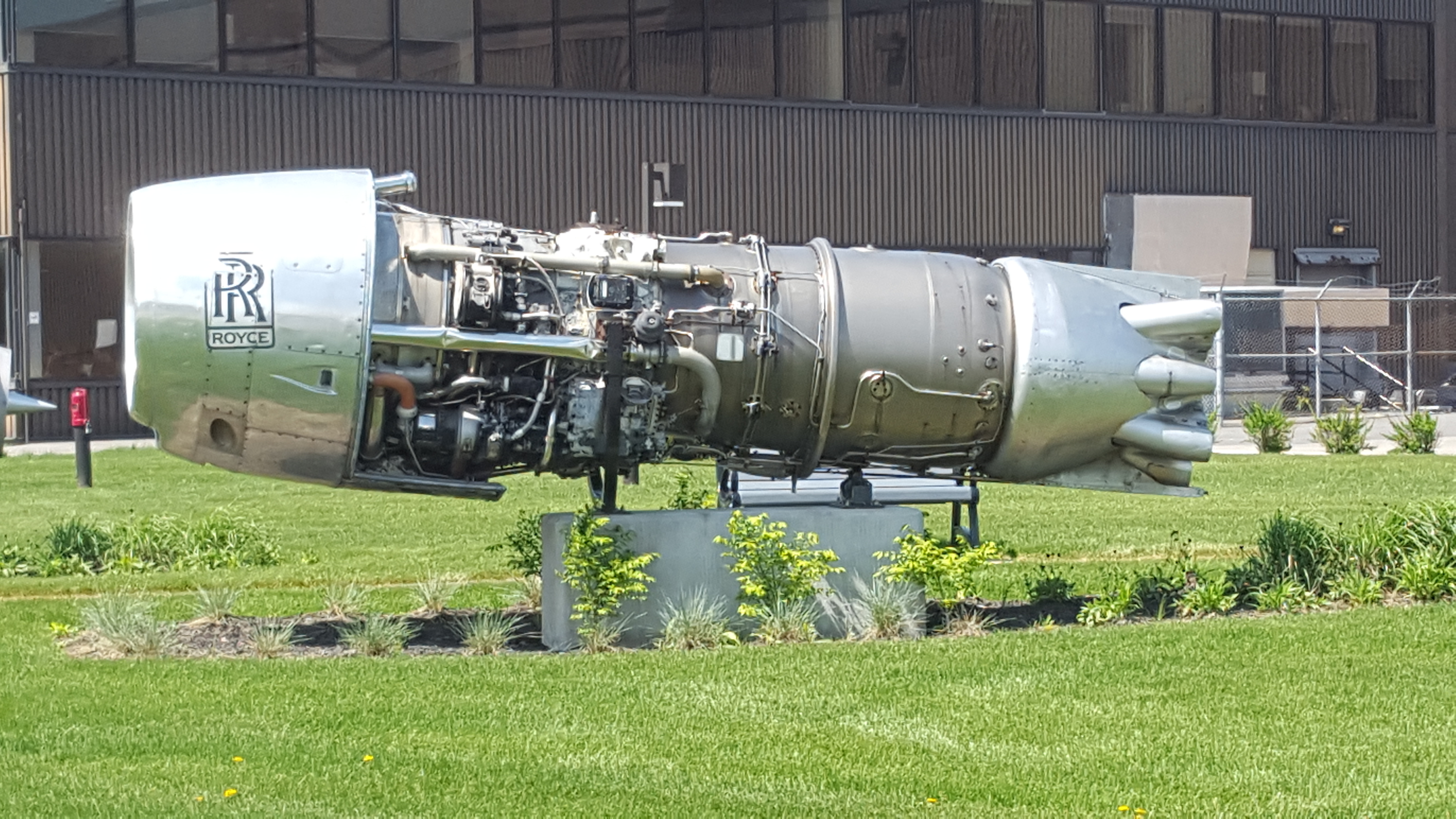