Richard Allen Posner (; born January 11, 1939) is an American jurist and economist who is a senior lecturer at the University of Chicago Law School. Between 1981 and 2017, he served as a United States circuit judge of the United States Court of Appeals for the Seventh Circuit in Chicago. He is a leading figure in the field of law and economics, and was identified by ''The Journal of Legal Studies'' as the most cited legal scholar of the 20th century. He is widely considered to be one of the most influential legal scholars in the United States. Posner is known for his scholarly range and for writing on topics outside of his primary field, law. In his various writings and books, he has addressed animal rights, feminism, drug prohibition, same-sex marriage, Keynesian economics, and academic moral philosophy, among other subjects. Posner is the author of nearly 40 books on jurisprudence, economics, and several other topics, including ''Economic Analysis of Law'', ''The Economics of Justice'', ''The Problems of Jurisprudence'', ''Sex and Reason'', ''Law, Pragmatism and Democracy'', and ''The Crisis of Capitalist Democracy''. Posner has generally been identified as being politically conservative; however, in recent years he has distanced himself from the positions of the Republican party, authoring more liberal rulings involving same-sex marriage and abortion. In ''A Failure of Capitalism'', he has written that the 2008 financial crisis has caused him to question the rational-choice, ''laissez-faire'' economic model that lies at the heart of his law and economics theory.

In 1968, Posner accepted a position teaching at Stanford Law School. In 1969, Posner moved to the faculty of the University of Chicago Law School, where he remains a senior lecturer. He was a founding editor of ''The Journal of Legal Studies'' in 1972. On October 27, 1981, Posner was nominated by President Ronald Reagan to a seat on the United States Court of Appeals for the Seventh Circuit vacated by Judge Philip Willis Tone. Posner was confirmed by the United States Senate on November 24, 1981, and received his commission on December 1, 1981. He served as Chief Judge of that court from 1993 to 2000 but remained a part-time professor at the University of Chicago. Judge Posner retired from the federal bench on September 2, 2017. Posner is a pragmatist in philosophy and an economist in legal methodology. He has written many articles and books on a wide range of topics including law and economics, law and literature, the federal judiciary, moral theory, intellectual property, antitrust law, public intellectuals, and legal history. He is also well known for writing on a wide variety of current events including the 2000 presidential election recount controversy, Bill Clinton's affair with Monica Lewinsky and his resulting impeachment procedure, and the 2003 invasion of Iraq. His analysis of the Lewinsky scandal cut across most party and ideological divisions. Posner's greatest influence is through his writings on law and economics; ''The New York Times'' called him "one of the most important antitrust scholars of the past half-century." In December 2004, Posner started a joint blog with Nobel Prize-winning economist Gary Becker, titled simply "The Becker-Posner Blog". Both men contributed to the blog until shortly before Becker's death in May 2014, after which Posner announced that the blog was being discontinued. He also has a blog at ''The Atlantic'', where he discusses the financial crisis. Posner was mentioned in 2005 as a potential nominee to replace Sandra Day O'Connor because of his prominence as a scholar and an appellate judge. Robert S. Boynton wrote in ''The Washington Post'' that he believed Posner would never sit on the Supreme Court because despite his "obvious brilliance," he would be criticized for his occasionally "outrageous conclusions," such as his contention "that the rule of law is an accidental and dispensable element of legal ideology," his argument that buying and selling children on the free market would lead to better outcomes than the present situation, government-regulated adoption, and his support for the legalization of marijuana and LSD. Posner on Posner Series Judge Posner was the focus of a "series" of posts (many Q&A interviews with the Judge) done by University of Washington Law Professor Ronald K. L. Collins. The twelve posts—collectively titled "Posner on Posner"—began on November 24, 2014, and ended on January 5, 2015, and appeared on the Concurring Opinions blog. 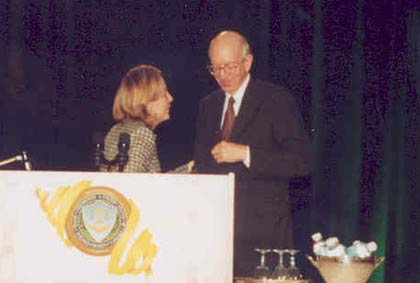 In Posner's youth and in the 1960s as law clerk to William J. Brennan, he was generally counted as a liberal. However, in reaction to some of the perceived excesses of the late 1960s, Posner developed a strongly conservative bent. He encountered Chicago School economists Aaron Director and George Stigler while a professor at Stanford. Posner summarized his views on law and economics in his 1973 book ''The Economic Analysis of Law''. Today, although generally viewed as to the right in academia, Posner's pragmatism, his qualified moral relativism and moral skepticism, and his affection for the thought of Friedrich Nietzsche set him apart from most American conservatives. As a judge, with the exception of his rulings with respect to the sentencing guidelines and the recording of police actions, Posner's judicial votes have always placed him on the moderate-to-liberal wing of the Republican Party, where he has become more isolated over time. In July 2012, Posner stated, "I've become less conservative since the Republican Party started becoming goofy." Among Posner's judicial influences are the American jurists Oliver Wendell Holmes Jr. and Learned Hand. In June 2016, Posner was criticized by right-wing media organizations for a column he wrote for ''Slate'' in which he stated, "I see absolutely no value to a judge of spending decades, years, months, weeks, day, hours, minutes, or seconds studying the Constitution, the history of its enactment, its amendments, and its implementation." He has called his approach to judging pragmatic. "I pay very little attention to legal rules, statutes, constitutional provisions. ... A case is just a dispute. The first thing you do is ask yourself—forget about the law—what is a sensible resolution of this dispute? The next thing ... is to see if a recent Supreme Court precedent or some other legal obstacle stood in the way of ruling in favor of that sensible resolution. And the answer is that's actually rarely the case. When you have a Supreme Court case or something similar, they're often extremely easy to get around."

Posner has written several opinions sympathetic to abortion rights, including a decision that held that late term abortion was constitutionally protected in some circumstances. In November 2015, Posner authored a decision in ''Planned Parenthood of Wisconsin v. Schimel'' striking down regulations on abortion clinics in Wisconsin. He rejected the state's argument that the laws were written to protect the health of women and not to make abortion more difficult to obtain. Accusing the state of indirectly trying to ban abortions in the state Posner wrote, "They isconsinmay do this in the name of protecting the health of women who have abortions, yet as in this case the specific measures they support may do little or nothing for health, but rather strew impediments to abortion."

Posner rejects the concept of animal rights. He recognizes the philosophical force of arguments for animal rights, but maintains that human intuition about the paramount value of human life makes it impossible to accommodate an ethic of animal rights. In a 2000 ''Yale Law Journal'' book review on the title "Rattling the Cage" by Steven M. Wise, Posner again criticized the legal notion of animal rights. In the review, Posner argues that Wise's approach, using the cognitive ability of animals compared to that of very young normal human beings as a basis for rights-worthiness, is arbitrary and in contrast with major traditional and contemporary philosophies (including the theology of Thomas Aquinas for one and utilitarianism for another). In addition, he points out that this basis for rights has problematic implications—including that it might soon make some computers more worthy of rights than some humans, a conclusion he calls absurd. Posner goes on to reason that granting human-like rights to animals is fraught with implications which could radically disrupt or devalue the rights of human beings. He alludes to Hitler's zoophilia as evidence that respect for animals and humaneness toward human beings are not necessarily associated. Arguing that the analogy of animal rights to the civil rights movement lacks imagination and is not very apt, Posner posits that animal welfare might be better protected by other legal models, one example of which would be stronger laws making animals property, since, he asserts, people tend to protect what they own. Posner engaged in a debate with the philosopher Peter Singer in 2001 at ''Slate magazine'', in which Posner argued against restricting the use of animals for food and in scientific experimentation. He agreed that gratuitous cruelty to animals should be avoided, but contends that animal welfare should only be advanced where doing so provides a marginal benefit to society. Posner argues that animal rights conflict with the moral relevance of humanity and that empathy for pain and suffering of animals does not supersede advancing society. He further argues that he trusts his moral intuition until it is shown to be wrong and that his moral intuition says that "it is wrong to give as much weight to a dog's pain as to an infant's pain." He further states that people whose opinions were changed by consideration of the ethics presented in Singer's book ''Animal Liberation'' failed to see the "radicalism of the ethical vision that powers heirview on animals, an ethical vision that finds greater value in a healthy pig than in a profoundly retarded child, that commands inflicting a lesser pain on a human being to avert a greater pain to a dog, and that, provided only that a chimpanzee has 1 percent of the mental ability of a normal human being, would require the sacrifice of the human being to save 101 chimpanzees."