The respiratory tract is the subdivision of the respiratory system involved with the process of respiration in mammals. The respiratory tract is lined with respiratory mucosa or respiratory epithelium. Air is breathed in through the nose to the nasal cavity, where a layer of nasal mucosa acts as a filter and traps pollutants and other harmful substances found in the air. Next, air moves into the pharynx, a passage that contains the intersection between the oesophagus and the larynx. The opening of the larynx has a special flap of cartilage, the epiglottis, that opens to allow air to pass through but closes to prevent food from moving into the airway. From the larynx, air moves into the trachea and down to the intersection known as the carina that branches to form the right and left primary (main) bronchi. Each of these bronchi branches into a secondary (lobar) bronchus that branches into tertiary (segmental) bronchi, that branch into smaller airways called bronchioles that eventually connect with tiny specialized structures called alveoli that function in gas exchange. The lungs which are located in the thoracic cavity, are protected from physical damage by the rib cage. At the base of the lungs is a sheet of skeletal muscle called the diaphragm. The diaphragm separates the lungs from the stomach and intestines. The diaphragm is also the main muscle of respiration involved in breathing, and is controlled by the sympathetic nervous system. The lungs are encased in a serous membrane that folds in on itself to form the pleurae – a two-layered protective barrier. The inner visceral pleura covers the surface of the lungs, and the outer parietal pleura is attached to the inner surface of the thoracic cavity. The pleurae enclose a cavity called the pleural cavity that contains pleural fluid. This fluid is used to decrease the amount of friction that lungs experience during breathing. 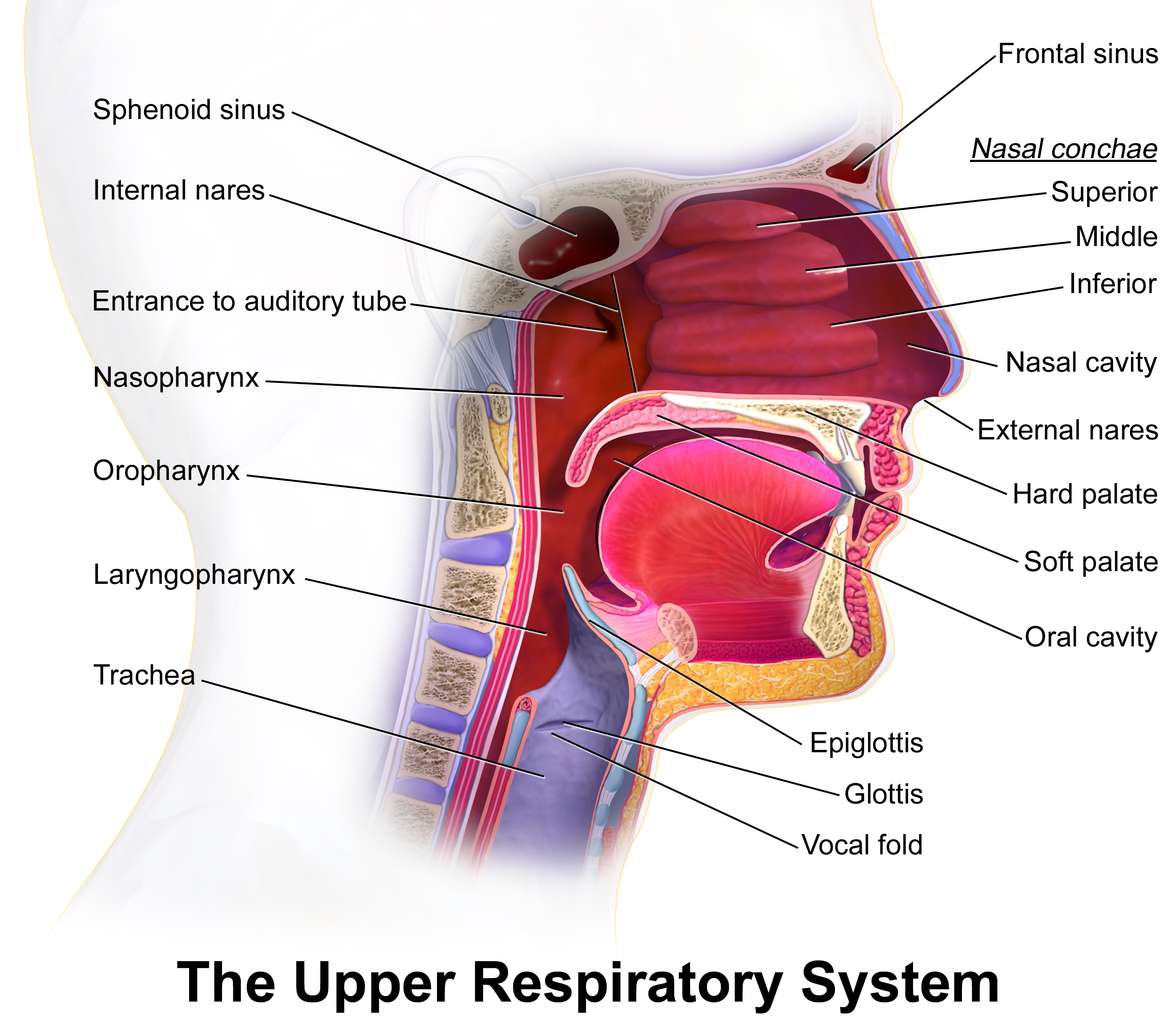 The upper respiratory tract, can refer to the parts of the respiratory system lying above the sternal angle (outside of the thorax), above the vocal folds, or above the cricoid cartilage. The larynx is sometimes included in both the upper and lower airways. The larynx is also called the voice box and has the associated cartilage that produces sound. The tract consists of the nasal cavity and paranasal sinuses, the pharynx (nasopharynx, oropharynx and laryngopharynx) and sometimes includes the larynx.