Click Here for Items Related To - Republic of Ragusa

hr|Sloboda se ne prodaje za sve zlato svijeta
it|La libertà non-si vende nemmeno per tutto l'oro del mondo
"Liberty is not sold for all the gold in the world" | currency = Ragusa perpera and others | common_languages = | title_leader = Rector as Head of state | leader1 = Nicola de Sorgo | year_leader1 = 1358–1370 | leader2 = Simone de Giorgi | year_leader2 = 1808 | stat_area1 = 1500 | stat_pop1 = 30,000 | stat_year1 = 1808 (?) | today = | footnotes = A Romance language related to both Italian and Romanian.
While present in the region even before the establishment of the Republic, Croatian language, also referred to as ''Slavic'' or ''Illyrian'' at the time, had not become widely spoken until late 15th century. | demonym = | area_km2 = | area_rank = | GDP_PPP = | GDP_PPP_year = | HDI = | HDI_year = thumb|Painting of Dubrovnik from 1667 The Republic of Ragusa ( hr|Dubrovačka Republika|lit=Dubrovnik Republic) was an aristocratic maritime republic centered on the city of Dubrovnik (' in Italian, German and Latin) in Dalmatia (today in southernmost Croatia) that carried that name from 1358 until 1808. It reached its commercial peak in the 15th and the 16th centuries, before being conquered by Napoleon's French Empire and formally annexed by the Napoleonic Kingdom of Italy in 1808. It had a population of about 30,000 people, of whom 5,000 lived within the city walls. Its motto was ''""'', which means "Liberty is not sold for all the gold in the world".

Originally named ' (Latin for "Ragusan municipality" or "community"), in the 14th century it was renamed ' (Latin for ''Ragusan Republic''), first mentioned in 1385. It was nevertheless a Republic under its previous name, although its Rector was appointed by Venice rather than by Ragusa's own Major Council. In Italian it is called '; in Croatian it is called ' (). The Slavic name ''Dubrovnik'' is derived from the word ', an oak grove; by a folk etymology. The name ''Dubrovnik'' of the Adriatic city is first recorded in the Charter of Ban Kulin (1189). It came into use alongside ''Ragusa'' as early as the 14th century. The Latin, Italian and Dalmatian name ' derives its name from ' (from the Greek : ', "precipice"); it was later altered to ', ', ' or ' (even ', ', ' and ') and finally into '. The official change of name from Ragusa to Dubrovnik came into effect after World War I. It is known in historiography as the ''Republic of Ragusa''. 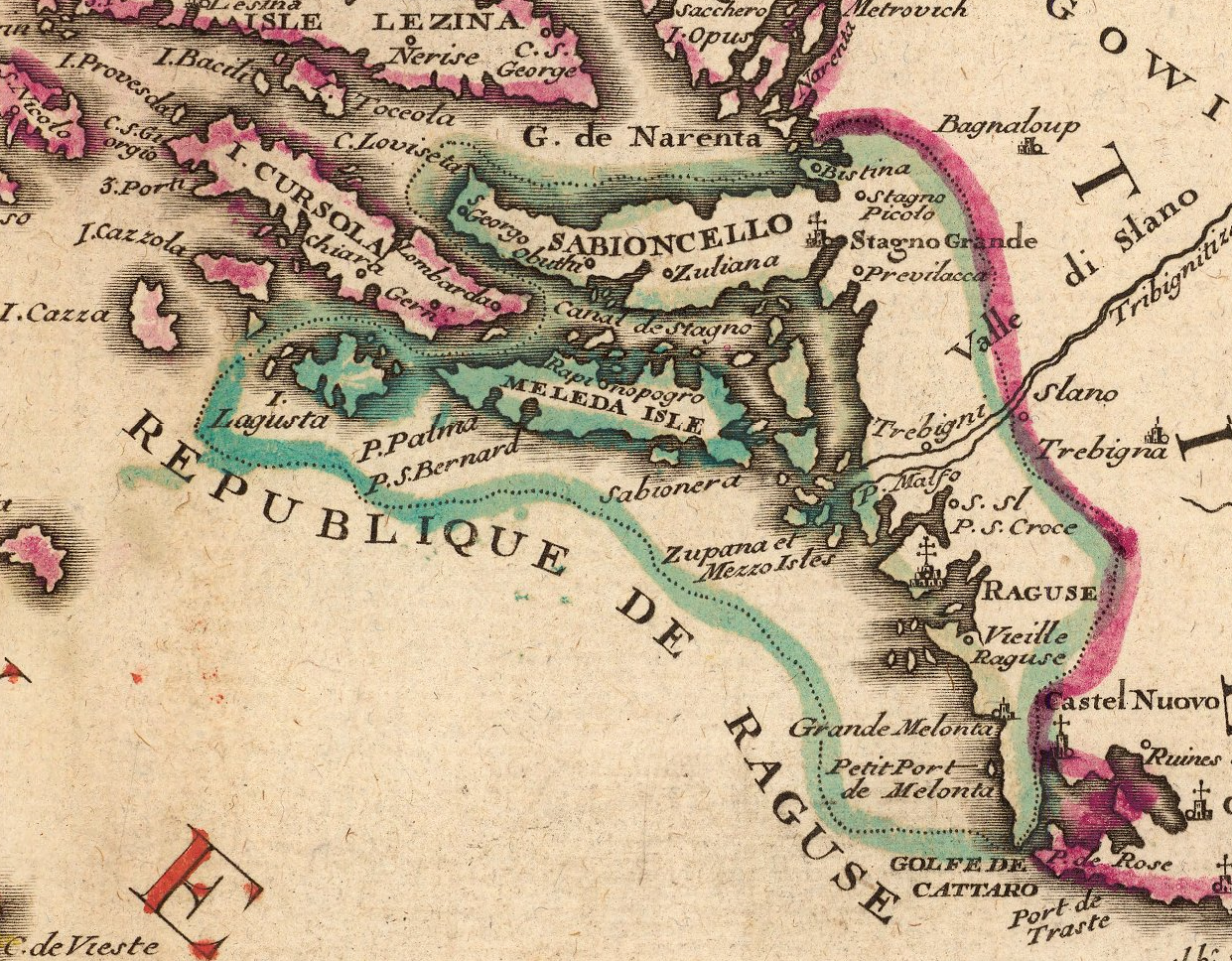 The Republic ruled a compact area of southern Dalmatia – its final borders were formed by 1426 – comprising the mainland coast from Neum to the Prevlaka peninsula as well as the Pelješac peninsula and the islands of Lastovo and Mljet, as well as a number of smaller islands such as Koločep, Lopud, and Šipan. In the 15th century the Ragusan republic also acquired the islands of Korčula, Brač and Hvar for about eight years. However they had to be given up due to the resistance of local minor aristocrats sympathizing with Venice, which was granting them some privileges. In the 16th century the administrative units of the Republic were: the City of Ragusa (Dubrovnik), counties (Konavle, Župa dubrovačka – Breno, Slano – Ragusan Littoral, Ston, Island of Lastovo, Island of Mljet, Islands of Šipan, Lopud and Koločep) and captaincies (Cavtat, Orebić, Janjina) with local magistrates appointed by the Major Council. Lastovo and Mljet were semi-autonomous communities each having its own Statute.


Origin of the city

According to the ''De Administrando Imperio'' of the Byzantine emperor Constantine VII Porphyrogennetos, the city was founded, probably in the 7th century, by the inhabitants of the Roman city of Epidaurum (modern Cavtat) after its destruction by the Avars and Slavs c. 615. Some of the survivors moved north to a small island near the coast where they founded a new settlement, Lausa. It has been claimed that a second raid by the Slavs in 656 resulted in the total destruction of Epidaurum. Slavs settled along the coast in the 7th century. The Slavs named their settlement ''Dubrovnik''. The Romance ("Latin") and Slavs held each other antagonistically, though by the 12th century the two settlements had merged. The channel that divided the city was filled, creating the present-day main street (the ''Stradun'') which became the city centre. Thus, ''Dubrovnik'' became the Croatian name for the united town. There are recent theories based on excavations that the city was established much earlier, at least in the 5th century and possibly during the Ancient Greek period (as per Antun Ničetić, in his book ''Povijest dubrovačke luke''). The key element in this theory is the fact that ships in ancient time traveled about 45 to 50 nautical miles per day, and mariners required a sandy shore to pull their ships out of the water for the rest period during the night. An ideal combination would have a fresh water source in the vicinity. Dubrovnik had both, being halfway between the Greek settlements of Budva and Korčula, which are apart.

During its first centuries the city was under the rule of the Byzantine Empire. The Saracens laid siege to the city in 866–67; it lasted for fifteen months and was raised due to the intervention of Byzantine Emperor Basil I, who sent a fleet under Niketas Ooryphas in relief. Ooryphas' "showing of the flag" had swift results, as the Slavic tribes sent envoys to the Emperor, once more acknowledging his suzerainty. Basil dispatched officials, agents and missionaries to the region, restoring Byzantine rule over the coastal cities and regions in the form of the new theme of Dalmatia, while leaving the Slavic tribal principalities of the hinterland largely autonomous under their own rulers; the Christianization of the Croats and the other Slavic tribes also began at this time. With the weakening of Byzantium, Venice began to see Ragusa as a rival that needed to be brought under its control, but an attempt to conquer the city in 948 failed. The citizens of the city attributed this to Saint Blaise, whom they adopted as their patron saint. The city remained under Byzantine domination until 1204, with the exception of periods of Venetian (1000–1030) and later Norman (1081–1085, 1172, 1189–90) rule. In 1050, Croatian king Stjepan I (Stephen) made a land grant along the coast that extended the boundaries of Ragusa to Zaton, north of the original city, giving the republic control of the abundant supply of fresh water that emerges from a spring at the head of the Ombla inlet.