In anthropology, pygmy peoples are ethnic groups whose average height is unusually short. The term pygmyism is used to describe the phenotype of endemic short stature (as opposed to disproportionate dwarfism occurring in isolated cases in a population) for populations in which adult men are on average less than tall. The term is primarily associated with the African Pygmies, the hunter-gatherers of the Congo basin (comprising the Bambenga, Bambuti and Batwa). The terms "Asiatic Pygmies" and "Oceanian pygmies" have been used to describe the Negrito populations of Southeast Asia and Australo-Melanesian peoples of short stature. The Taron people of Myanmar are an exceptional case of a "pygmy" population of East Asian phenotype. 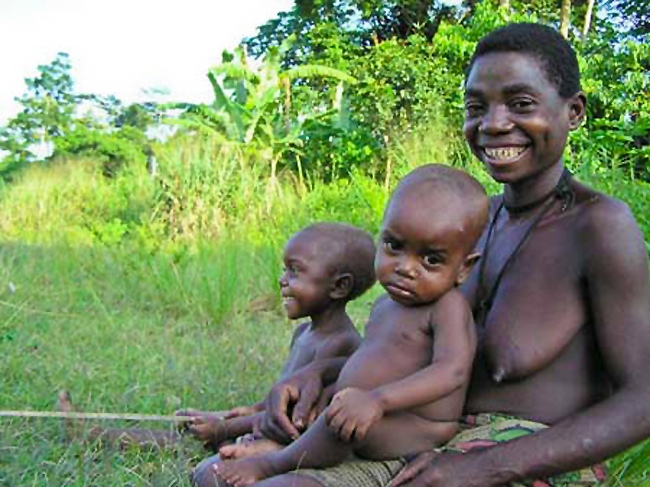 The term ''pygmy'', as used to refer to diminutive people, derives from Greek πυγμαῖος ''pygmaios'' via Latin ''Pygmaei'' (sing. ''Pygmaeus''), derived from πυγμή – meaning a short forearm cubit, or a measure of length corresponding to the distance from the wrist to the elbow. (See also Greek πῆχυς ''pēkhys''.) In Greek mythology the word describes a tribe of dwarfs, first described by Homer, the ancient Greek poet, and reputed to live in India and south of modern-day Ethiopia. The term ''pygmy'' is sometimes considered pejorative. However, there is no single term to replace it. In French speaking Africa, they are sometimes referred to as autochthon, (''autochtone''), referring to 'native' or 'indigenous'. Many prefer to be identified by their ethnicity, such as the Aka (Mbenga), Baka, Mbuti, and Twa. The term ''Bayaka'', the plural form of the Aka/Yaka, is sometimes used in the Central African Republic to refer to all local pygmies. Likewise, the Kongo word ''Bambenga'' is used in Congo. In parts of Africa they are called Wochua or Achua.

Various theories have been proposed to explain the short stature of pygmies. Some studies suggest that it could be related to adaptation to low ultraviolet light levels in rainforests. This might mean that relatively little vitamin D can be made in human skin, thereby limiting calcium uptake from the diet for bone growth and maintenance, and leading to the evolution of the small skeletal size. Other explanations include lack of food in the rainforest environment, low calcium levels in the soil, the need to move through dense jungle, adaptation to heat and humidity, and as an association with rapid reproductive maturation under conditions of early mortality. (See also .) Other evidence points towards unusually low levels of expression of the genes encoding the growth hormone receptor and growth hormone compared to the related tribal groups, associated with low serum levels of insulin-like growth factor-1 and short stature.

African pygmies live in several ethnic groups in Rwanda, Burundi, Uganda, the Democratic Republic of the Congo (DRC), the Republic of Congo (ROC), the Central African Republic, Cameroon, the Equatorial Guinea, Gabon, Angola, Botswana, Namibia, Madagascar, and Zambia. There are at least a dozen pygmy groups, sometimes unrelated to each other. The best known are the Mbenga (Aka and Baka) of the western Congo basin, who speak Bantu and Ubangian languages; the Mbuti (Efe ''etc.'') of the Ituri Rainforest, who speak Bantu and Central Sudanic languages, and the Twa of the African Great Lakes, who speak Bantu Rundi and Kiga. Most pygmy communities are partially hunter-gatherers, living partially but not exclusively on the wild products of their environment. They trade with neighbouring farmers to acquire cultivated foods and other material items; no group lives deep in the forest without access to agricultural products. It is estimated that there are between 250,000 and 600,000 Pygmies living in the Congo rainforest. However, although Pygmies are thought of as forest people, the groups called Twa may live in open swamp or desert.

A commonly held belief is that African Pygmies are the direct descendants of Late Stone Age hunter-gatherer peoples of the central African rainforest, who were partially absorbed or displaced by later immigration of agricultural peoples, and adopted their Central Sudanic, Ubangian, and Bantu languages. This view has no archaeological support, and ambiguous support from genetics and linguistics. Some 30% of Aka language is not Bantu, and a similar percentage of Baka language is not Ubangian. Much of pygmy vocabulary is botanical, dealing with honey collecting, or is otherwise specialized for the forest, and is shared between the two western pygmy groups. It has been proposed that this is the remnant of an independent western pygmy (Mbenga or "Baaka") language. However, this type of vocabulary is subject to widespread borrowing among the Pygmies and neighboring peoples, and the "Baaka" language was only reconstructed to the 15th century. African pygmy populations are genetically diverse and extremely divergent from all other human populations, suggesting they have an ancient indigenous lineage. Their uniparental markers represent the second-most ancient divergence right after those typically found in Khoisan peoples. Recent advances in genetics shed some light on the origins of the various pygmy groups. Researchers found "an early divergence of the ancestors of pygmy hunter–gatherers and farming populations 60,000 years ago, followed by a split of the Pygmies' ancestors into the Western and Eastern pygmy groups 20,000 years ago." New evidence suggests East and West African pygmy children have different growth patterns. The difference between the two groups may indicate the Pygmies’ short stature did not start with their common ancestor, but instead evolved independently in adapting to similar environments, which adds support that some sets of genes related to height were advantageous in Eastern pygmy populations, but not in Western pygmy populations. However, Roger Blench (1999) argues that the Pygmies are not descended from residual hunter-gatherer groups, but rather are offshoots of larger neighboring ethnolinguistic groups that had adopted forest subsistence strategies. Blench notes the lack of clear linguistic and archaeological evidence for the antiquity of pygmy cultures and peoples, and also notes that the genetic evidence can be problematic. Blench (1999) also notes that there is no evidence of the Pygmies have hunting technology distinctive from that of their neighbors, and argues that the short stature of pygmy populations can arise relatively quickly (in less than a few millennia) due to strong selection pressures. 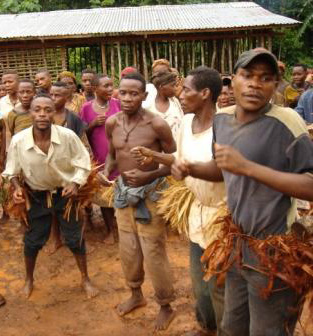 The African Pygmies are particularly known for their usually vocal music, usually characterised by dense contrapuntal communal improvisation. Simha Arom says that the level of polyphonic complexity of pygmy music was reached in Europe in the 14th century, yet pygmy culture is unwritten and ancient. Music permeates daily life and there are songs for entertainment as well as specific events and activities.

The pygmy population was a target of the Interahamwe during the 1994 Rwandan Genocide. Of the 30,000 Pygmies in Rwanda, an estimated 10,000 were killed and another 10,000 were displaced. They have been described as "forgotten victims" of the genocide. From the end of 2002 through January 2003 around 60,000 pygmy civilians and 10,000 combatants were killed in an extermination campaign known as "Effacer le Tableau" during the Second Congo War. Human rights activists have made demands for the massacre to be recognized as genocide.

In the Republic of the Congo, where Pygmies make up 2% of the population, many Pygmies live as slaves to Bantu masters. The nation is deeply stratified between these two major ethnic groups. The pygmy slaves belong to their Bantu masters from birth in a relationship that the Bantus call a time-honored tradition. Even though the Pygmies are responsible for much of the hunting, fishing and manual labor in jungle villages, Pygmies and Bantus alike say that Pygmies are often paid at the master's whim: in cigarettes, used clothing, or simply not paid at all. As a result of pressure from UNICEF and human-rights activists, in 2009, a law that would grant special protections to the pygmy people was awaiting a vote by the Congo parliament. According to reports made in 2013, this law was never passed. In the Democratic Republic of the Congo, during the Ituri Conflict, Ugandan-backed rebel groups were accused by the UN of enslaving Mbutis to prospect for minerals and forage for forest food, with those returning empty handed being killed and eaten.

In Northern Katanga Province starting in 2013, the pygmy Batwa people, whom the Luba people often exploit and allegedly enslave,