thumb|upright=1.35|The SI system after 1983, but before the 2019 redefinition: Dependence of base unit definitions on other base units (for example, the metre is defined as the distance travelled by [[light in a specific fraction of a [[second]]), with the constants of nature and artefacts used to define them (such as the mass of the [[IPK]] for the kilogram).]] Effective 20 May 2019, the 144th anniversary of the [[Metre Convention]], the SI base units were redefined in agreement with the International System of Quantities. In the redefinition, four of the seven SI base units – the kilogram, ampere, kelvin, and mole – were redefined by setting exact numerical values when expressed in SI units for the Planck constant ('), the elementary electric charge ('), the Boltzmann constant (), and the Avogadro constant (), respectively. The second, metre, and candela were already defined by physical constants and were not subject to correction to their definitions. The new definitions aimed to improve the SI without changing the value of any units, ensuring continuity with existing measurements. In November 2018, the 26th General Conference on Weights and Measures (CGPM) unanimously approved these changes, which the International Committee for Weights and Measures (CIPM) had proposed earlier that year after determining that previously agreed conditions for the change had been met. These conditions were satisfied by a series of experiments that measured the constants to high accuracy relative to the old SI definitions, and were the culmination of decades of research. The previous major change of the metric system occurred in 1960 when the International System of Units (SI) was formally published. At this time the metre was redefined: the definition was changed from the prototype of the metre to a certain number of wavelengths of a spectral line of a krypton-86 radiation, making it derivable from universal natural phenomena. The kilogram remained defined by a physical prototype, leaving it the only artefact upon which the SI unit definitions depend. At this time the SI, as a coherent system, was constructed around seven ''base units'', powers of which were used to construct all other units. With the 2019 redefinition, the SI is constructed around seven defining ''constants'', allowing all units to be constructed directly from these constants. The designation of base units is retained but is no longer essential to define SI measures. The metric system was originally conceived as a system of measurement that was derivable from unchanging phenomena, but practical limitations necessitated the use of artefacts – the prototype of the metre and prototype of the kilogram – when the metric system was introduced in France in 1799. Although it was designed for long-term stability, the masses of the prototype kilogram and its secondary copies have shown small variations relative to each other over time; they are not thought to be adequate for the increasing accuracy demanded by science, prompting a search for a suitable replacement. The definitions of some units were defined by measurements that are difficult to precisely realise in a laboratory, such as the kelvin, which was defined in terms of the triple point of water. With the 2019 redefinition, the SI became wholly derivable from natural phenomena with most units being based on fundamental physical constants. A number of authors have published criticisms of the revised definitions; their criticisms include the premise that the proposal failed to address the impact of breaking the link between the definition of the dalton and the definitions of the kilogram, the mole, and the Avogadro constant.

The basic structure of SI was developed over about 170 years between 1791 and 1960. Since 1960, technological advances have made it possible to address weaknesses in SI such as the dependence on a physical artefact to define the kilogram.

During the early years of the French Revolution, the leaders of the French National Constituent Assembly decided to introduce a new system of measurement that was based on the principles of logic and natural phenomena. The metre was defined as one ten-millionth of the distance from the north pole to the equator and the kilogram as the mass of one thousandth of a cubic metre of pure water. Although these definitions were chosen to avoid ownership of the units, they could not be measured with sufficient convenience or precision to be of practical use. Instead, realisations were created in the form of the ' and ' which were a "best attempt" at fulfilling these principles. By 1875, use of the metric system had become widespread in Europe and in Latin America; that year, twenty industrially developed nations met for the Convention of the Metre, which led to the signing of the Treaty of the Metre, under which three bodies were set up to take custody of the international prototypes of the kilogram and the metre, and to regulate comparisons with national prototypes. They were: * CGPM (General Conference on Weights and Measures, ') – The Conference meets every four to six years and consists of delegates of the nations that had signed the convention. It discusses and examines the arrangements required to ensure the propagation and improvement of the International System of Units and it endorses the results of new fundamental metrological determinations. * CIPM (International Committee for Weights and Measures, ') – The Committee consists of eighteen eminent scientists, each from a different country, nominated by the CGPM. The CIPM meets annually and is tasked with advising the CGPM. The CIPM has set up a number of sub-committees, each charged with a particular area of interest. One of these, the Consultative Committee for Units (CCU), advises the CIPM on matters concerning units of measurement. * BIPM (International Bureau for Weights and Measures, ') – The Bureau provides safe keeping of the international prototypes of the kilogram and the metre, provides laboratory facilities for regular comparisons of the national prototypes with the international prototype, and is the secretariat for the CIPM and the CGPM. The first CGPM (1889) formally approved the use of 40 prototype metres and 40 prototype kilograms made by the British firm Johnson Matthey as the standards mandated by the Convention of the Metre. One of each of these was nominated by lot as the international prototypes, the CGMP retained other copies as working copies, and the rest were distributed to member nations for use as their national prototypes. About once every 40 years, the national prototypes were compared with and recalibrated against the international prototype. In 1921 the Convention of the Metre was revised and the mandate of the CGPM was extended to provide standards for all units of measure, not just mass and length. In the ensuing years, the CGPM took on responsibility for providing standards of electrical current (1946), luminosity (1946), temperature (1948), time (1956), and molar mass (1971). The 9th CGPM in 1948 instructed the CIPM "to make recommendations for a single practical system of units of measurement, suitable for adoption by all countries adhering to the Metre Convention". The recommendations based on this mandate were presented to the 11th CGPM (1960), where they were formally accepted and given the name "'" and its abbreviation "SI". 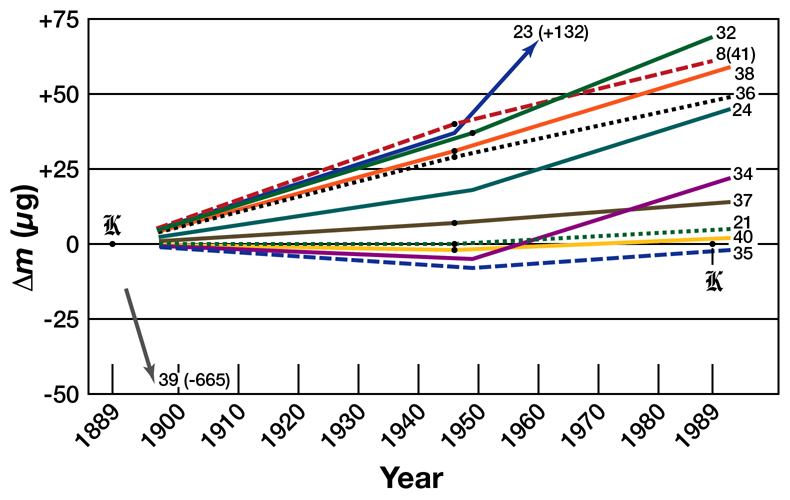 Since their manufacture, drifts of up to kilograms per year in the national prototype kilograms relative to the international prototype of the kilogram (IPK) have been detected. There was no way of determining whether the national prototypes were gaining mass or whether the IPK was losing mass. Newcastle University metrologist Peter Cumpson has since identified mercury vapour absorption or carbonaceous contamination as possible causes of this drift. At the 21st meeting of the CGPM (1999), national laboratories were urged to investigate ways of breaking the link between the kilogram and a specific artefact. Metrologists investigated several alternative approaches to redefining the kilogram based on fundamental physical constants. Among others, the Avogadro project and the development of the Kibble balance (known as the "watt balance" before 2016) promised methods of indirectly measuring mass with very high precision. These projects provided tools that enable alternative means of redefining the kilogram. A report published in 2007 by the Consultative Committee for Thermometry (CCT) to the CIPM noted that their current definition of temperature has proved to be unsatisfactory for temperatures below and for temperatures above . The committee took the view that the Boltzmann constant provided a better basis for temperature measurement than did the triple point of water because it overcame these difficulties. At its 23rd meeting (2007), the CGPM mandated the CIPM to investigate the use of natural constants as the basis for all units of measure rather than the artefacts that were then in use. The following year this was endorsed by the International Union of Pure and Applied Physics (IUPAP). At a meeting of the CCU held in Reading, United Kingdom, in September 2010, a resolution and draft changes to the SI brochure that were to be presented to the next meeting of the CIPM in October 2010 were agreed to in principle. The CIPM meeting of October 2010 found "the conditions set by the General Conference at its 23rd meeting have not yet been fully met. For this reason the CIPM does not propose a revision of the SI at the present time". The CIPM, however, presented a resolution for consideration at the 24th CGPM (17–21 October 2011) to agree to the new definitions in principle, but not to implement them until the details had been finalised. This resolution was accepted by the conference, and in addition the CGPM moved the date of the 25th meeting forward from 2015 to 2014. At the 25th meeting on 18 to 20 November 2014, it was found that "despite rogress in the necessary requirementsthe data do not yet appear to be sufficiently robust for the CGPM to adopt the revised SI at its 25th meeting", thus postponing the revision to the next meeting in 2018. Measurements accurate enough to meet the conditions were available in 2017 and the redefinition