Click Here for Items Related To - Presidency of Barack Obama


The presidency of Barack Obama began at noon EST (17:00 UTC) on January 20, 2009, when Barack Obama was inaugurated as the 44th president of the United States, and ended on January 20, 2017. Obama, a Democrat from Illinois, took office following a decisive victory over Republican nominee John McCain in the 2008 presidential election. Four years later, in the 2012 presidential election, he defeated Republican nominee Mitt Romney to win re-election. Obama was succeeded by Republican Donald Trump, who won the 2016 presidential election. He was the first African American president, the first multiracial president, the first non-white president, and the first president to have been born in Hawaii. Obama's first-term actions addressed the global financial crisis and included a major stimulus package, a partial extension of the Bush tax cuts, legislation to reform health care, a major financial regulation reform bill, and the end of a major US military presence in Iraq. Obama also appointed Supreme Court Justices Elena Kagan and Sonia Sotomayor, the latter of whom became the first Hispanic American on the Supreme Court. Democrats controlled both houses of Congress until Republicans won a majority in the House of Representatives in the 2010 elections. Following the elections, Obama and Congressional Republicans engaged in a protracted stand-off over government spending levels and the debt ceiling. The Obama administration's policy against terrorism downplayed Bush's counterinsurgency model, expanding air strikes and making extensive use of special forces and encouraging greater reliance on host-government militaries. The Obama administration orchestrated the military operation that resulted in the killing of Osama bin Laden on May 2, 2011. In his second term, Obama took steps to combat climate change, signing a major international climate agreement and an executive order to limit carbon emissions. Obama also presided over the implementation of the Affordable Care Act and other legislation passed in his first term, and he negotiated rapprochements with Iran and Cuba. The number of American soldiers in Afghanistan fell dramatically during Obama's second term, though U.S. soldiers remained in Afghanistan throughout Obama's presidency and continue to as of 2021. Republicans took control of the Senate after the 2014 elections, and Obama continued to grapple with Congressional Republicans over government spending, immigration, judicial nominations, and other issues.

After winning election to represent the state of Illinois in the Senate in 2004, Obama announced that he would run for president in February 2007. In the 2008 Democratic primary, Obama faced Senator and former First Lady Hillary Clinton. Several other candidates, including Senator Joe Biden of Delaware and former Senator John Edwards, also ran for the nomination, but these candidates dropped out after the initial primaries. In June, on the day of the final primaries, Obama clinched the nomination by winning a majority of the delegates, including both pledged delegates and superdelegates. Obama and Biden, whom Obama selected as his running mate, were nominated as the Democratic ticket at the August 2008 Democratic National Convention. With Republican President George W. Bush term limited, the Republicans nominated Senator John McCain of Arizona for the presidency. In the general election, Obama defeated McCain, taking 52.9% of the popular vote and 365 of the 538 electoral votes. In the Congressional elections, Democrats added to their majorities in both houses of Congress, and Speaker of the House Nancy Pelosi and Senate Majority Leader Harry Reid both remained in their posts. Republicans John Boehner and Mitch McConnell continued to serve as House Minority Leader and Senate Minority Leader, respectively.

The presidential transition period began following Obama's election to the presidency in November 2008, though Obama had chosen Chris Lu to begin planning for the transition in May 2008. John Podesta, Valerie Jarrett, and Pete Rouse co-chaired the Obama-Biden Transition Project. During the transition period, Obama announced nominations for his Cabinet and administration. In November 2008, Congressman Rahm Emanuel accepted Obama's offer to serve as White House Chief of Staff. Obama was inaugurated on January 20, 2009, succeeding George W. Bush. Obama officially assumed the presidency at 12:00 pm, EST, and completed the oath of office at 12:05 pm, EST. He delivered his inaugural address immediately following his oath. Obama's transition team was highly complimentary of the Bush administration's outgoing transition team, particularly with regards to national security, and some elements of the Bush-Obama transition were later codified into law.

Following his inauguration, Obama and the Senate worked to confirm his nominees to the United States Cabinet. Three Cabinet-level officers did not require confirmation: Vice President Joe Biden, who Obama had chosen as his running mate at the 2008 Democratic National Convention, Chief of Staff Rahm Emanuel, and Defense Secretary Robert Gates, who Obama chose to retain from the previous administration. An early list of suggestions came from Michael Froman, then an executive at Citigroup. Obama described his Cabinet choices as a "team of rivals," and Obama chose several prominent public officials for Cabinet positions, including former Democratic primary rival Hillary Clinton as Secretary of State. Obama nominated several former Clinton administration officials to the Cabinet and to other positions. On April 28, 2009, the Senate confirmed former Kansas governor Kathleen Sebelius as Secretary of Health and Human Services, completing Obama's initial Cabinet. During Obama's presidency, four Republicans served in Obama's Cabinet: Ray LaHood as Secretary of Transportation, Robert McDonald as Secretary of Veterans Affairs, and Gates and Chuck Hagel as Secretaries of Defense. 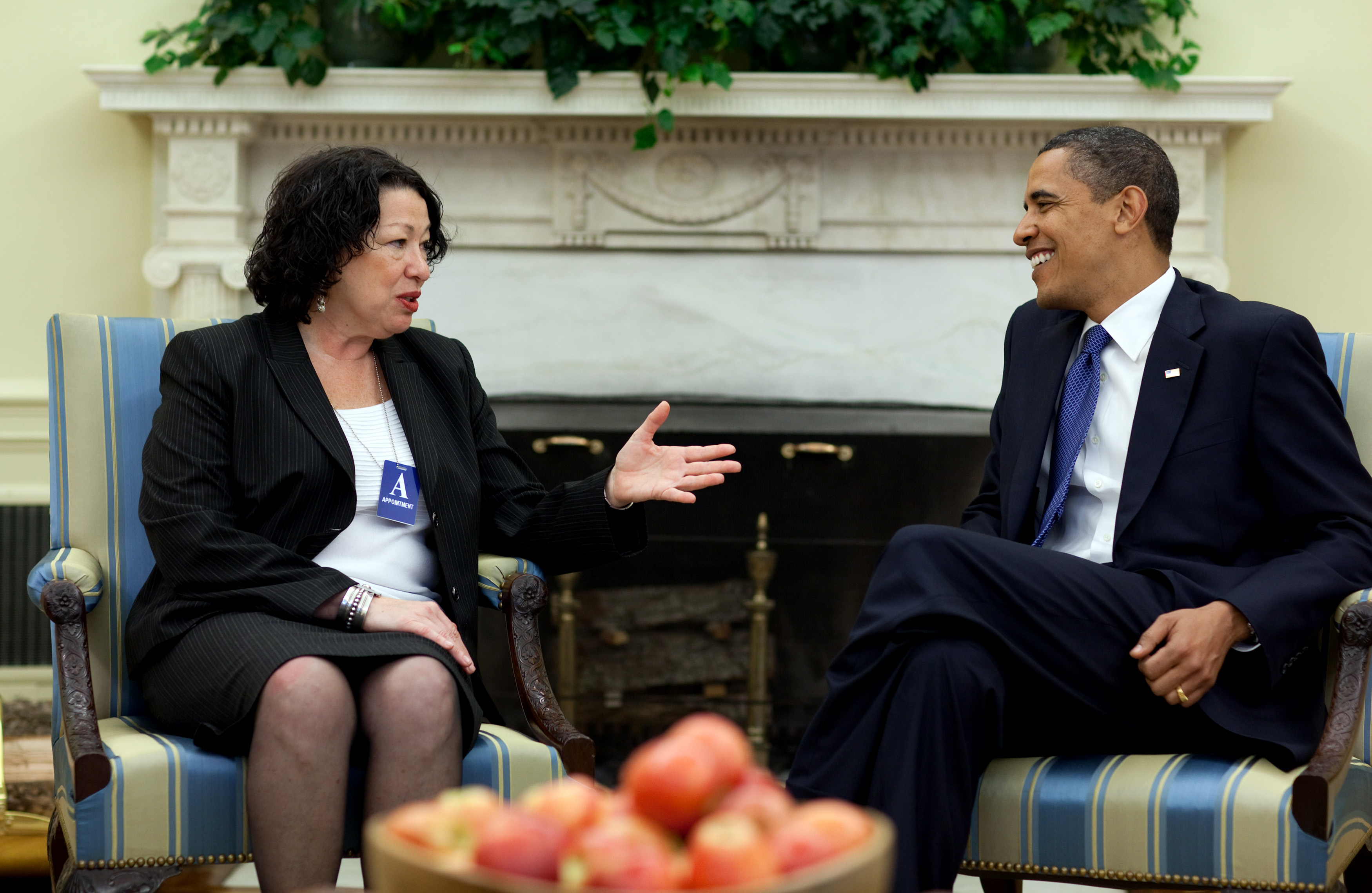 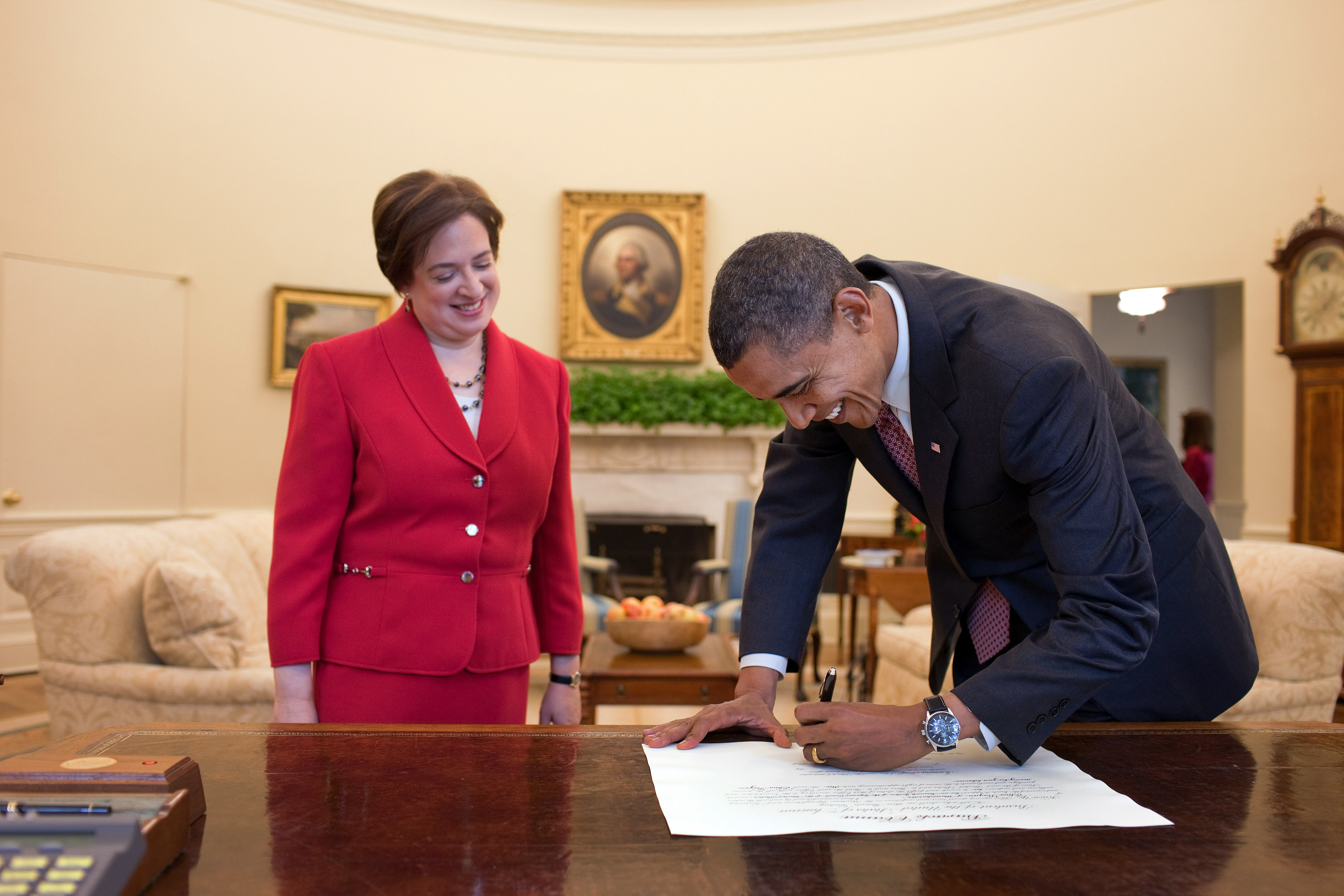 There were three vacancies on the Supreme Court of the United States during Obama's tenure, but Obama made only two successful Supreme court appointments. During the 111th Congress, when Democrats held a majority in the Senate, Obama successfully nominated two Supreme Court Justices: * Sonia Sotomayor, replacing David Souter2009 * Elena Kagan, replacing John Paul Stevens2010 Justice Antonin Scalia died in February 2016, during the 114th Congress, which had a Republican majority in the Senate. In March 2016, Obama nominated Chief Judge Merrick Garland of the D.C. Circuit to fill Scalia's seat. However, Senate Majority Leader Mitch McConnell, Judiciary Committee Chair Chuck Grassley, and other Senate Republicans argued that Supreme Court nominations should not be made during a presidential election year, and that the winner of the 2016 presidential election should instead appoint Scalia's replacement. Garland's nomination remained before the Senate for longer than any other Supreme Court nomination in history, and the nomination expired with the end of the 114th Congress. President Donald Trump later nominated Neil Gorsuch to Scalia's former seat on the Supreme Court, and Gorsuch was confirmed by the Senate in April 2017.

Obama's presidency saw the continuation of battles between both parties over the confirmation of judicial nominees. Democrats continually accused Republicans of stalling nominees throughout Obama's tenure.