In the early 1960s, Porsche was planning to discontinue the Type 356, which would leave them with the newly-introduced Type 911 as their only product. Concerned that the considerable price increase of a 911 with flat opposed six-cylinder powerplant over the 356 would cost the company sales and narrow brand appeal, in 1963 Porsche executives decided to introduce a new four-cylinder entry-level model. Like the 911 (original internal factory designation "901"), the four-cylinder 912 was originally known at Zuffenhausen by a number with a zero in the middle, but the "902" designation was never used publicly. ("912" as project number was used after 1968 to indicate the 12 cylinder flat opposed engine developed for Porsche 917 racing car) In 1963, Porsche assigned Dan Schwartz, later Chief Departmental Manager for Development, Mechanics, a project to oversee design and construction of a new horizontally-opposed four-cylinder engine for the 902, utilizing components from the new 901 six-cylinder engine, that would produce higher performance than their 356SC engine, and be less costly and complex than their Carrera 2 engine. Another option explored by Claus von Rücker was to increase displacement of the 356 Type 616 engine to 1.8-liters, add Kugelfischer fuel injection, and modify both valve and cooling systems. Considering performance, cost, and scheduling, Porsche discontinued both of these design projects, and instead developed a third option, to tailor the 1.6-liter Type 616 engine to the 902. Before 911 production commenced in 1964, the Porsche Vehicle Research Department had set aside chassis numbers 13328, 13329, 13330, 13352, and 13386 through 13397 for research testing of the 902; research vehicle Serial Number 13394 is the oldest 902 known to exist today. In production form, the Type 912 combined a 911 chassis / bodyshell with the 1.6L, four-cylinder, push-rod Type 616/36 engine, based upon the Type 616/16 engine used in the Type 356SC of 1964-1965. With a lower compression ratio and new Solex carburetors, the Type 616/36 engine produced five less horsepower than the 616/16, but delivered about the same maximum torque at 3,500 rpm versus 4,200 rpm for the 616/16. Compared to the 911, the resulting production Type 912 vehicle demonstrated superior weight distribution, handling, and range. To bring 912 pricing close to the 356, Porsche also removed some features standard on the 911. As production of the 356 concluded in 1965, on April 5, 1965 Porsche officially began production of the 912 coupé. Styling, performance, quality construction, reliability, and price made the 912 a very attractive buy to both new and old customers, and it substantially outsold the 911 during the first few years of production. Porsche produced nearly 30,000 912 coupé units and about 2500 912 Targa body style units (Porsche's patented variation of a cabriolet) during a five-year manufacturing run. 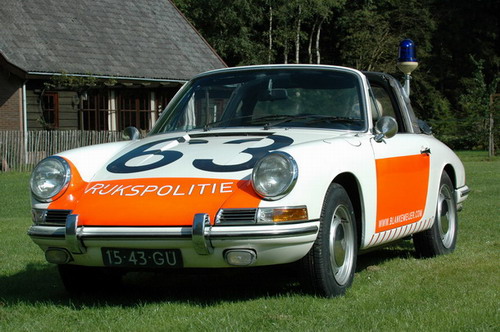 Production of the Targa, complete with removable roof and heavy transparent plastic rear windows openable with a zipper (later called 'Version I' by Porsche and the 'soft-window Targa' by enthusiasts), commenced in December 1966 as a 1967 model. In January 1968, Porsche also made available a Targa 'Version II' option ('hard window Targa') with fixed glass rear window, transforming the Targa into a coupé with removable roof. The 912 was also made in a special version for the German autobahn police (polizei); the 100,000th Porsche car was a 912 Targa for the police of Baden-Württemberg, the home state of Porsche. In the April 1967 edition, the Porsche factory's Christophorus Magazine noted: "On 21 December 1966, Porsche celebrated a particularly proud anniversary. The 100,000th Porsche, a 912 Targa outfitted for the police, was delivered." Porsche executives decided that after the 1969 model year, continuation of 912 production would not be viable, due to both internal and external factors. First, production facilities used for the 912 were reallocated to a new 914-6, a six-cylinder high performance version of the Porsche 914, Porsche-Volkswagen joint effort vehicle. Second, the 911 platform had returned to Porsche's traditional three performance-level ladder, including a most powerful 911S, a fuel-injected 911E, and a base model 911T, with pricing largely in line with market expectations. Third, more stringent United States engine emission control regulations also had a bearing on the decision; Ferry Porsche stated "It would have taken some trouble to prepare the 912 for the new exhaust rules, and with the arrival of the 914 we would have had three different engines to keep current. That was too many."

The 912E has the same chassis as the 911 and therefore handles much like the 911. But with less power and less weight behind the rear axle, the 912E is more forgiving and less prone to sudden oversteer than the 911. The E was the only 912 offered with a corrosion-resistant galvanized chassis, and is the most comfortable version of the 912. The interior is the same as the 911, though some pieces were extra cost options including two of the five gauges. 14-inch Fuchs alloy wheels was a popular option; "Cookie-Cutter" alloy wheels were also available (it was rare to see a 912E with the standard 15-inch steel wheels). Other options were electric sunroof, 923/02 anti-slip differential, electric antenna (located on the passenger side front fender), power door mirrors, power windows, headlight washers, H1 headlamps. Air conditioning was a popular dealer-installed option. As a stopgap, the 912E was the single instance of "planned obsolescence" in Porsche history. Only 2,092 were built, but this plus year-only status and the desirable qualities inherited from contemporary 911s have since made the 912E one of the more collectible four-cylinder Porsches. Based on 912 Registry member Aric Gless's research, over half of the 2,092 cars are still in use. The Prototyp Museum collection in Hamburg Germany includes a 912E pre-series vehicle constructed utilizing a 911 Chassis No. 911 520 1617 and four-cylinder VW-Porsche 90HP 2.0L Type 4 similar to the late-model 2.0L 914/4. ''Road & Track'' said, “The 912E will obviously find favor with those who prefer a slightly more practical and tractable Porsche. It’s a car with almost all the sporting virtues of the more expensive 911S, yet its simpler pushrod 4-cyl. engine should make for better fuel economy and less expensive maintenance than the 911’s six” "The fittings are simpler in this model although in terms of materials, trim and finishing the 912E is of high Porsche quality. "The 912E is comfortable where the Carrera is harsh, rational where the Carrera is excessive.” R&T’s 11.3-second 0-60 mph time and 115-mph top speed looked good against the observed 23.0-mpg economy."

Sold to the public for street use, the Porsche 912 has also proven successful as a race car, from production years to current vintage events. In 1967 the 912 contributed to Porsche factory rally history when independent Polish driver Sobiesław Zasada drove a factory-loaned 912, bearing Polish plate 6177 KR, to capture the European Rally Championship for Group 1 series touring cars. In the 1967 Rally of Poland, the second oldest rally in the world and one of the oldest motorsport events in the world, Zasada drove his 912 race No. 47 to finish first overall out of a starting field of 50 entries. As a vintage rally car, on January 29, 2012 Hayden Burvill, Alastair Caldwell, and their #35 1968 Porsche 912 finished first in class, and 7th overall in the 2012 London to Cape Town World Cup Rally; a 14 country, three continent, 14,000 kilometre, 26 driving-days event.