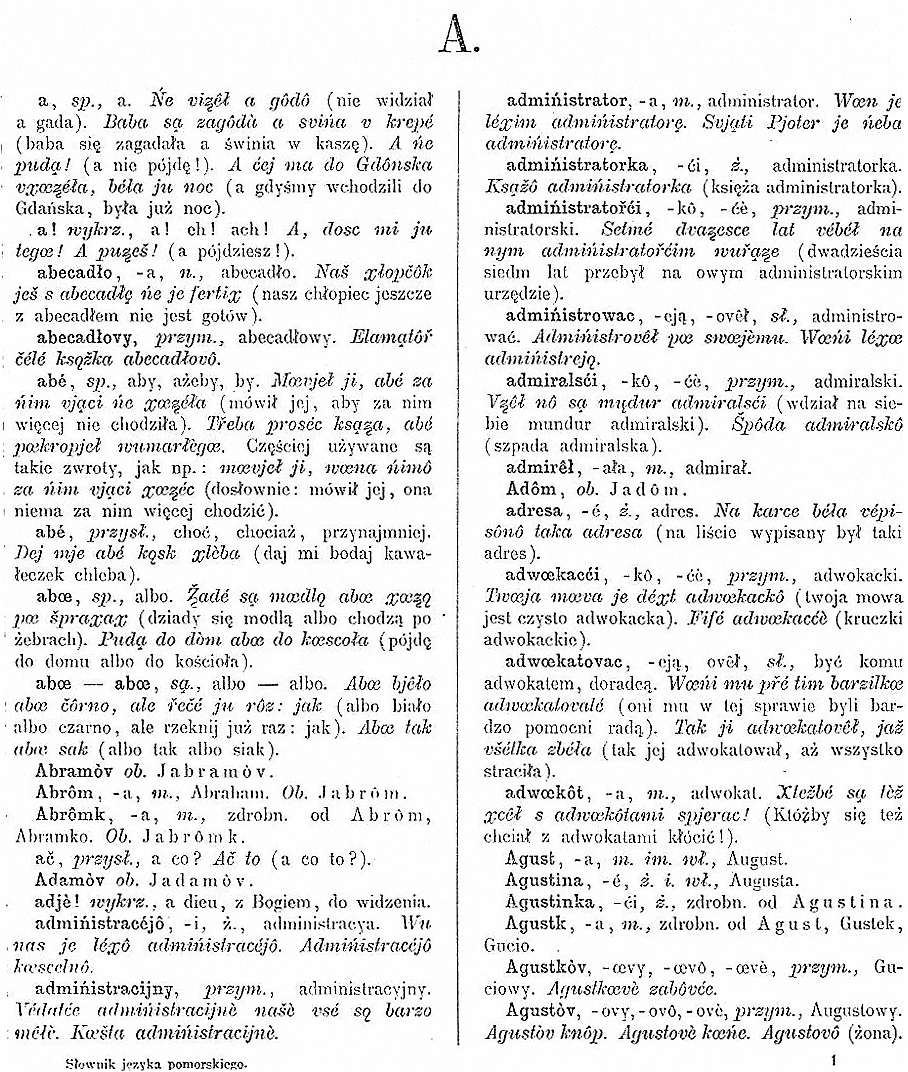 The Pomeranian language (Polish: ''pomorszczyzna'' or ''język pomorski'', German: ''Pomoranisch'' or ''die pomoranische Sprache'') is in the Pomeranian group of Lechitic languages (Polish: ''grupa pomorska języków lechickich'', German: ''die pomoranische Gruppe der lechischen Sprachen'') within the West Slavic languages. In medieval contexts, it refers to the dialects spoken by the Slavic Pomeranians. In modern contexts, the term is sometimes used synonymously with "Kashubian" and may also include extinct Slovincian. The name ''Pomerania'' comes from Slavic , which means "andby the sea".

During the early medieval Slavic migrations, the area between the Oder and Vistula rivers was settled by tribes grouped as Pomeranians. Their dialects, sometimes referred to as Ancient Pomeranian, had a transitory character between the Polabian dialects spoken west of Pomerania and the Old Polish dialects spoken to the southeast. While there are no surviving documents in Pomeranian, medieval Pomeranian names are mentioned in contemporary documents written in other languages.

During the High Middle Ages, German immigration and assimilation of the Slavic Pomeranians () introduced Low German East Pomeranian, Central Pomeranian, and dialects, which became dominant in Pomerania except for some areas in the east, where the populace remained largely Slavic and continued to use the Slavic Pomeranian language. This was especially the case in Pomerelia, where the Slavic population became known as Kashubians and their language accordingly as Kashubian. An insular Slavic Pomeranian dialect spoken northwest of Kashubia until the 20th century became known as Slovincian. It is disputed whether Slovincian may be regarded as a dialect of Kashubian or a separate language. Likewise, it is disputed whether Kashubian may be regarded as a dialect of Polish or a separate language. Stefan Ramułt (1859–1913) was fascinated by Florian Ceynowa and decidedly supported giving Kashubian the status of a full-fledged standard language.


Influence on other dialects

The classification of the Pomeranian ethnolect is problematic. It was classified by Aleksander Bruckner as one of the Old Polish dialects. At the same time, he classified the extant Kashubian and Slovincian dialects as belonging to the Modern Polish language. Other linguists relate the Pomeranian language to the Polabian group of dialects (forming the Pomeranian-Polabian group). After Slovincian and all the Pomeranian dialects (except Kashubian) became extinct, the Kashubian language is the term most often used in relation to the language spoken by the Pomeranians. However, it is still not clear from where the words “Kashubians” and “Kashubian” ( pl|Kaszubi and , csb|Kaszëbi and ) originated and how they were brought from the area near Koszalin to Pomerelia. None of the theories proposed has been widely accepted so far. There is also no indication that Pomeranians wandered from the area of Koszalin to Pomerelia. While Western Pomerania was being Germanized, the Germans (both colonizers and Germanized descendants of Slavic Pomeranians) started using the words "Pomeranian" (german: Pommersch; pl|pomorski|links=no) and "Pomeranians" (german: Pommern|nocat=y; pl|Pomorzacy|nocat=y) referring to their own population. The part of the Pomeranian population which kept their Slavic language was called the Wends (german: Wenden|nocat=y) or the Kashubians (german: Kaschuben|nocat=y). As the West lost its Slavic character, those two terms were more often used in the East. In 1850, in the preface to his Kashubian-Russian dictionary, Florian Ceynowa wrote about the language of Baltic Slavic peoples: "Usually it is called the 'Kashubian language', although the 'Pomeranian-Slovenian dialect' would be a more proper term." The word dialect was probably used by Ceynowa because he was a follower of Pan-Slavism, according to which all the Slavic languages were dialects of one Slavic language. In his later works, though, he called his language . In 1893, Stefan Ramułt, the Jagiellonian University linguist, referred to the early history of Pomerania, publishing the ''Dictionary of the Pomoranian i.e. Kashubian Language''. In the preface, Ramułt wrote: : As Kashubians are the direct descendants of Pomeranians, it is right to use the words Pomeranian and Kashubian as synonyms. Especially as there are other reasons for it as well... and : Kashubians and Slavs are what remains of the once powerful Pomeranian tribe and they are the only inheritors of the name Pomeranians. Friedrich Lorentz (the author of ''Pomeranian Grammar'' and ''The History of Pomeranian/Kashubian Language'') referred in his works to Ramułt’s dictionary. After Lorentz died, Friedhelm Hinze published a Pomeranian dictionary in five volumes (), which was based on Lorentz’s writing.


The status of Kashubian today

The Pomeranian language, and its only surviving form, Kashubian, traditionally have not been recognized by the majority of Polish linguists, and have been treated in Poland as "the most distinct dialect of Polish". However, there have also been some Polish linguists who treated Pomeranian as a separate language. The most prominent of them were Stefan Ramułt, and Alfred Majewicz, who overtly called Kashubian a language in the 1980s. Following the collapse of communism in Poland, attitudes on the status of Kashubian have been gradually changing. It is increasingly seen as a fully fledged language, as it is taught in state schools and has some limited usage on public radio and television. A bill passed by the Polish parliament in 2005 recognizes it as the only regional language in the Republic of Poland, and provides for its use in official contexts in 10 communes where its speakers constitute at least 20% of the population.