Point Defiance Park in
Tacoma, Washington Tacoma ( ) is a mid-sized urban port city and the county seat of Pierce County, Washington, United States. The city is on Washington's Puget Sound, southwest of Seattle (of which it is the largest satellite city), northeast of the state capital ...
is a large
urban park#REDIRECT Urban park#REDIRECT Urban park {{R from other capitalisation ...
{{R from other capitalisation ...
in the
United States The United States of America (USA), commonly known as the United States (U.S. or US), or America, is a country primarily located in North America. It consists of 50 states, a federal district, five major self-governing territories, 326 India ...
. The park includes Point Defiance Zoo & Aquarium, the Rose Garden, Rhododendron Garden, beaches, trails, a
boardwalk A boardwalk (alternatively board walk, boarded path, or promenade) is an elevated footpath, walkway, or causeway built with wooden planks that enables pedestrians to cross wet, fragile, or marshy land. They are also in effect a low type of bridge. ...
, a
boathouse A boathouse (or a boat house) is a building especially designed for the storage of boats, normally smaller craft for sports or leisure use.
, a
Washington State Ferries Washington State Ferries (WSF) is a government agency that operates automobile and passenger ferry service in the U.S. state of Washington as part of the Washington State Department of Transportation. It runs ten routes serving 20 terminals locat ...
ferry dock for the Point Defiance-Tahlequah route to
Vashon Island Vashon is a census-designated place (CDP) in King County, Washington, United States. It covers an island alternately called Vashon Island or Vashon-Maury Island, the largest island in Puget Sound south of Admiralty Inlet. The population was 10,624 ...
,
Fort Nisqually Fort Nisqually was an important fur trading and farming post of the Hudson's Bay Company in the Puget Sound area, part of the Hudson's Bay Company's Columbia Department. It was located in what is now DuPont, Washington. Today it is a living histo ...
, an off-leash dog park, and most notably a stand of old-growth forest. It receives more than three million visitors every year. Point Defiance Park is maintained and operated by the Metropolitan Park District of Tacoma.

Point Defiance Park offers something for all its visitors, both wildlife and people. Not all the wild animals are confined inside Zoo & Aquarium. From high cliffs overlooking the Tacoma Narrows people can watch bald eagles feed on salmon runs passing through on the strong tidal currents. Their calls can be heard from their nests in the old growth forest that is preserved and make up the northern of the park. In winter, sea lions migrating from California feed in the swirling tides beneath the Gig Harbor overlook on the northernmost point of the peninsula. Harbor seals are common near the tip of the point most of the year. Seal pups are frequently observed north of Owen Beach in late summer and early fall (humans and their dogs should keep their distance to avoid spooking the pups.) The park also provides habitat for mule deer, red foxes, pileated woodpeckers, Douglas squirrels, and raccoons. Endangered species: One of the features of the park is to sit in quiet contemplation in one of the Japanese Gardens. At sunset, wolves howl as the sun sinks into the tall trees with the Olympic Mountains silhouetted on the horizon. The wolves are temporary guests as part of a restoration project for endangered species that the Zoo & Aquarium and Northwest Trek, Northwest Trek Wildlife Park sponsor.

As the largest urban park in Pierce County, Washington, Pierce County, the network of roads and trails weaving through the forest preserve provides a quiet retreat for joggers, cyclists, hikers. Trails are marked with symbols. Portions of The Five Mile Drive are closed to cars on Saturday. There are many hiking trails along Pt. Defiance's cliffs, that have sweeping views of
Vashon Island Vashon is a census-designated place (CDP) in King County, Washington, United States. It covers an island alternately called Vashon Island or Vashon-Maury Island, the largest island in Puget Sound south of Admiralty Inlet. The population was 10,624 ...
, Dalco Passage, Gig Harbor, and the Tacoma Narrows Bridge. The road network also passes by
Fort Nisqually Fort Nisqually was an important fur trading and farming post of the Hudson's Bay Company in the Puget Sound area, part of the Hudson's Bay Company's Columbia Department. It was located in what is now DuPont, Washington. Today it is a living histo ...
. From Owen Beach, kayakers launch and ride the strong currents north into the tidal rips. Fishermen drift in these tides waiting for salmon bound to south sound rivers. The cliffs provide a buffer. Gliding out into the narrows, kayakers find a quiet oasis in the middle of an urban environment. There are also many beach goers, willing to venture further up the peninsula. 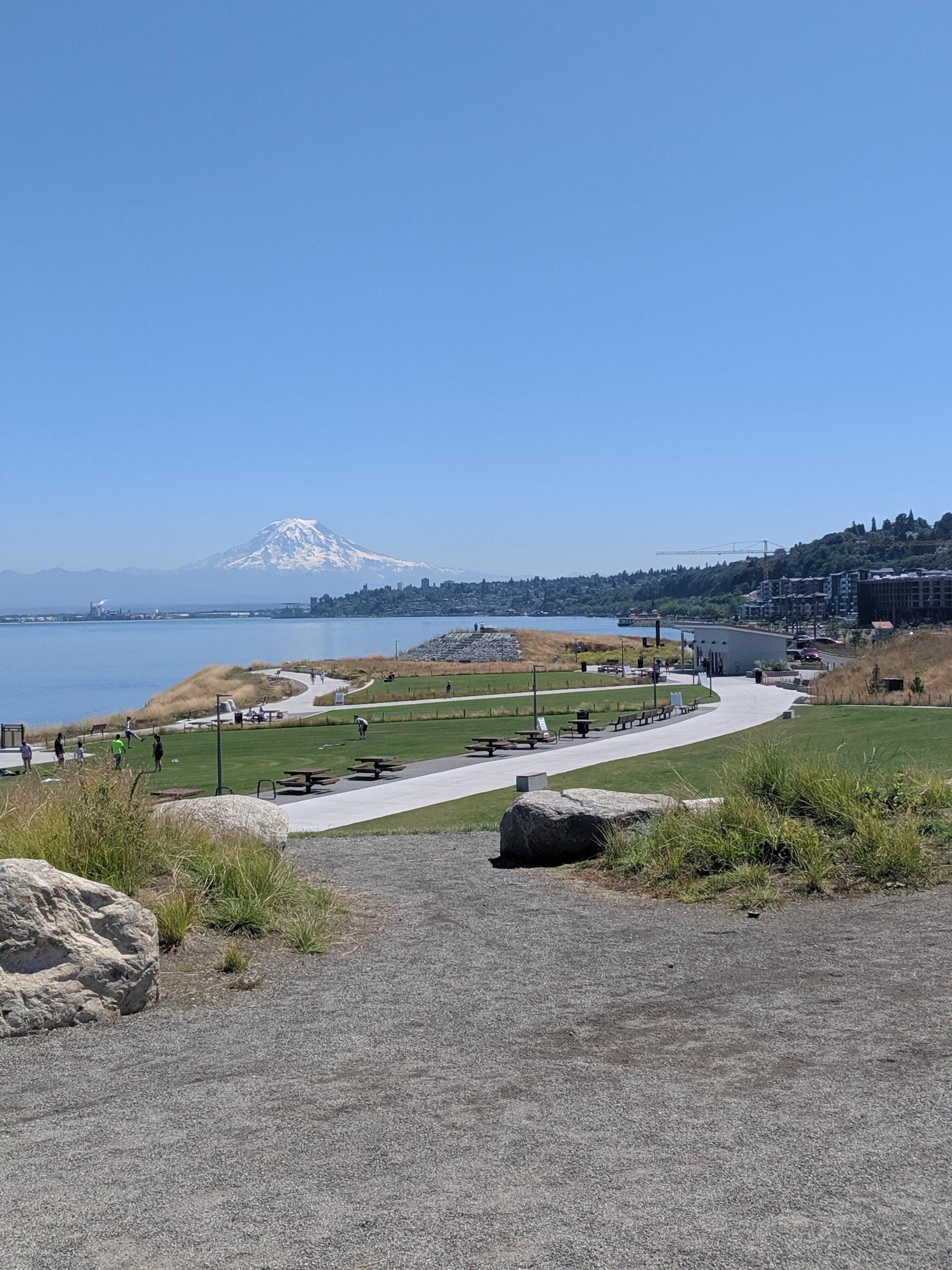 Image:Point Defiance Park.jpg, Rose Garden at Point Defiance The gardens remain today. Visitors find a Japanese Garden, Rose Garden, and Dahlia gardens surrounding the former superintendent's home. The home was built in 1898 in the year of the Yukon Gold Rush. The gardens are located near the park's main entrance on the approach to the Zoo & Aquarium. It is sited on a bluff looking down on a waterfront containing the boathouse, Anthony's Restaurant and Washington State Ferry landing providing access to
Vashon Island Vashon is a census-designated place (CDP) in King County, Washington, United States. It covers an island alternately called Vashon Island or Vashon-Maury Island, the largest island in Puget Sound south of Admiralty Inlet. The population was 10,624 ...
. Other public gardens on site include the Native Plant, Herb, Fuchsia, and Iris gardens. The prominent feature of the Japanese Garden is the Pagoda, built in 1914 as a streetcar station. When buses replaced street cars throughout the West, the Pagoda became a waiting area for buses in 1938. In 1963 it was transformed into a center for flower shows and social gatherings. The Pagoda and Lodge were refurbished in 1988. In 2011 the Pagoda was heavily damaged in an arson fire but beautifully restored. The Pagoda and Lodge are rented throughout the year for weddings and receptions.

After a century of depositing slag into the waters of Puget Sound, ASARCO, Asarco's Tacoma Smelter created a peninsula to form the park's protected harbor. The Tacoma Yacht Club sits on the peninsula's promontory as a guardian of snug harbor. A public boat launch at the entrance of the harbor is part of the park's recreational facilities.

In the fall of 2009, Tacoma Public Schools opened the Science and Math Institute (Tacoma), Science and Math Institute (SAMI), a science- and math-centered magnet high school within Point Defiance Park. SAMI features classes on the beach, pagoda, forests, and Zoo. Metro Parks was approached by the school district and gave them space for portable classrooms. The school has a concept and schedule similar to the district's other magnet school, magnet high school, Tacoma School of the Arts (TSOTA).