Phraya Phahonphonphayuhasena, (29 March 1887 – 14 February 1947) (short form: Phraya Phahon), born as Phot Phahonyothin, was a Thai military leader and politician. He became the second prime minister of Siam in 1933 after ousting his predecessor in a
coup d'état A coup d'état (; French for "blow of state") or coup is the removal and seizure of a government and its powers. Typically, it is an illegal, unconstitutional seizure of power by a political faction, the military, or a dictator. Many scholars co ...
. He retired in 1938 after serving five years as prime minister.

Phot was born in Phra Nakhon Province (present-day
Bangkok Bangkok is the capital and most populous city of Thailand. It is known in Thai language, Thai as Krung Thep Maha Nakhon or simply Krung Thep. The city occupies in the Chao Phraya River delta in central Thailand and has an estimated population of ...
) to a Teochew Thai Chinese father, Colonel Kim Phahonyothin (), and a Thai Mon mother, Chap Phahonyothin (). After attending the
Chulachomklao Royal Military Academy Chulachomklao Royal Military Academy (CRMA) ( th, โรงเรียนนายร้อยพระจุลจอมเกล้า, Rongreiyn nayroy phra chulachomklao or รร.จปร.) is the service academy of Royal Thai Army (RTA). ...
, in 1903 he was sent by royal
scholarship A scholarship is an award of Student financial aid, financial aid for a student to further their education at a private elementary or secondary school, or a private or public post-secondary college, university, or other academic institution. Sch ...
to study at the
Prussian Military Academy, constructed 1845/25 by Karl Friedrich Schinkel Karl Friedrich Schinkel (13 March 1781 – 9 October 1841) was a Prussia Prussia, , Old Prussian: ''Prūsa'' or ''Prūsija'' was a historically prominent Germans, German state that originated i ...
(''Preußische Hauptkadettenanstalt'') in the town of Lichterfelde, near
Berlin Berlin (; ) is the Capital city, capital and List of cities in Germany by population, largest city of Germany by both area and population. Its 3,769,495 inhabitants, as of 31 December 2019 makes it the List of cities in the European Union by p ...
,
Germany ) , image_map = , map_caption = , map_width = 250px , capital = Berlin , coordinates = , largest_city = capital , languages_type = Official language , languages = German language, German , demonym = Germans, German , government_ ...
, where he was apparently a classmate of
Hermann Göring Hermann Wilhelm Göring (or Goering; ; 12 January 1893 – 15 October 1946) was a German political and military leader and a convicted war criminal. He was one of the most powerful figures in the Nazi Party The Nazi Party, officiall ...
and became acquainted with
Hideki Tojo

through sword duels. Phot was then sent to study at the Engineering College of Copenhagen in Denmark, he was however only able to complete one year as his scholarship funds had run out, he returned to Siam in 1912. In 1931 he was elevated to the title of Phraya Phahonphonphayuhasena by King Prajadhipok (or Rama VII) and received the rank of colonel. In 1932 he became List of Commanders of the Royal Thai Army, Commander of the Royal Siamese Army.

Phraya Phahon was an important member of a group of conspirators known as the "Four Musketeers" (). They were part of the ''Khana Ratsadon'' (or 'People's Party') who carried out the Siamese revolution of 1932, revolution of 1932. After 1932 coup, three factions formed among the political and military leaders of Khana Ratsadon. These were: first, the senior military faction led by Phraya Phahon; second, the junior army and navy faction led by Plaek Phibunsongkhram, Luang Phibunsongkhram; and third, the civilian faction led by Pridi Phanomyong. As the most senior Phraya Phahon was viewed as the de facto leader of the Khana Ratsadon and the revolution itself. It was Phraya Phahon who read the ''Declaration of the New Siamese State'' in the Royal Plaza (Thailand), Royal Plaza that declared the end of absolute monarchy and the establishment of the constitutional monarchy, constitutional Siamese state. Because of the key role he played in the revolution he was rewarded with a high position in the new government and was made a member of the new Cabinet (government), cabinet. In March 1933 a constitutional crisis developed in Siam over the "Yellow Cover Dossier" incident, precipitated by Pridi's draft economic plan, which contained socialist elements. Because of this, Phraya Manopakorn Nititada, the prime minister, expelled him from the cabinet and suspended the constitution. This action upset many in the People's Party who supported Pridi, including Phraya Phahon. On 15 June Phraya Phahon resigned from the cabinet citing health reasons. In truth, he and a couple of military officers planned to overthrow Phraya Mano's increasingly authoritarian government. On 20 June a Siamese coup d'état of 1933, bloodless coup was carried out, led by Phraya Phahon. The following day, Phraya Phahon appointed himself the second prime minister of Siam. He immediately sent a report to King Prajadhipok explaining the objectives of the coup and asked for the king's support. Reluctantly the king endorsed him. Phraya Mano was exiled to Malaysia.

in Tokyo in 1942, as Phibun's envoy. The next five years were a struggle to maintain power. In October 1933, a royalist revolt against Phraya Phahon's government, the Boworadet Rebellion, occurred only four months after his becoming prime minister. After weeks of fighting, government troops emerged victorious and Phraya Phahon was able to solidify his position. The cabinet was divided politically. The government was maintained only by the force of his personality. Luang Phibunsongkhram, a trusted confidant, became minister of defence under the new government and he began to acquire greater power and influence in preparation for his eventual ascension to the premiership. The beginning of the end for Phraya Phahon's time as prime minister began in 1937 when a scandal erupted involving the sale of crown real estate to high-ranking officials at below-market prices. After a near collapse that year, the first direct elections for the National Assembly of Thailand, People's Assembly took place on 7 November 1937. Those in Phraya Phahon's cabinet found themselves an ideological and political minority. After budget issues in 1938, the cabinet was forced to resign in September 1938 followed by elections in December which resulted in Plaek Phibunsongkhram, Luang Phibunsongkhram becoming the prime minister of Thailand.

After his term as prime minister, General Phraya Phahon retired from public life, though he served as Inspector-General of the Royal Thai Armed Forces during World War II. He died in February 1947 at the age of 59 of cerebral haemorrhage. It was said that when he died, despite the fact that he had held many positions in government, his family lacked the funds to pay for his funeral. Luang Phibunsongkhram, his protege and the incumbent prime minister, stepped in to defray the cost. 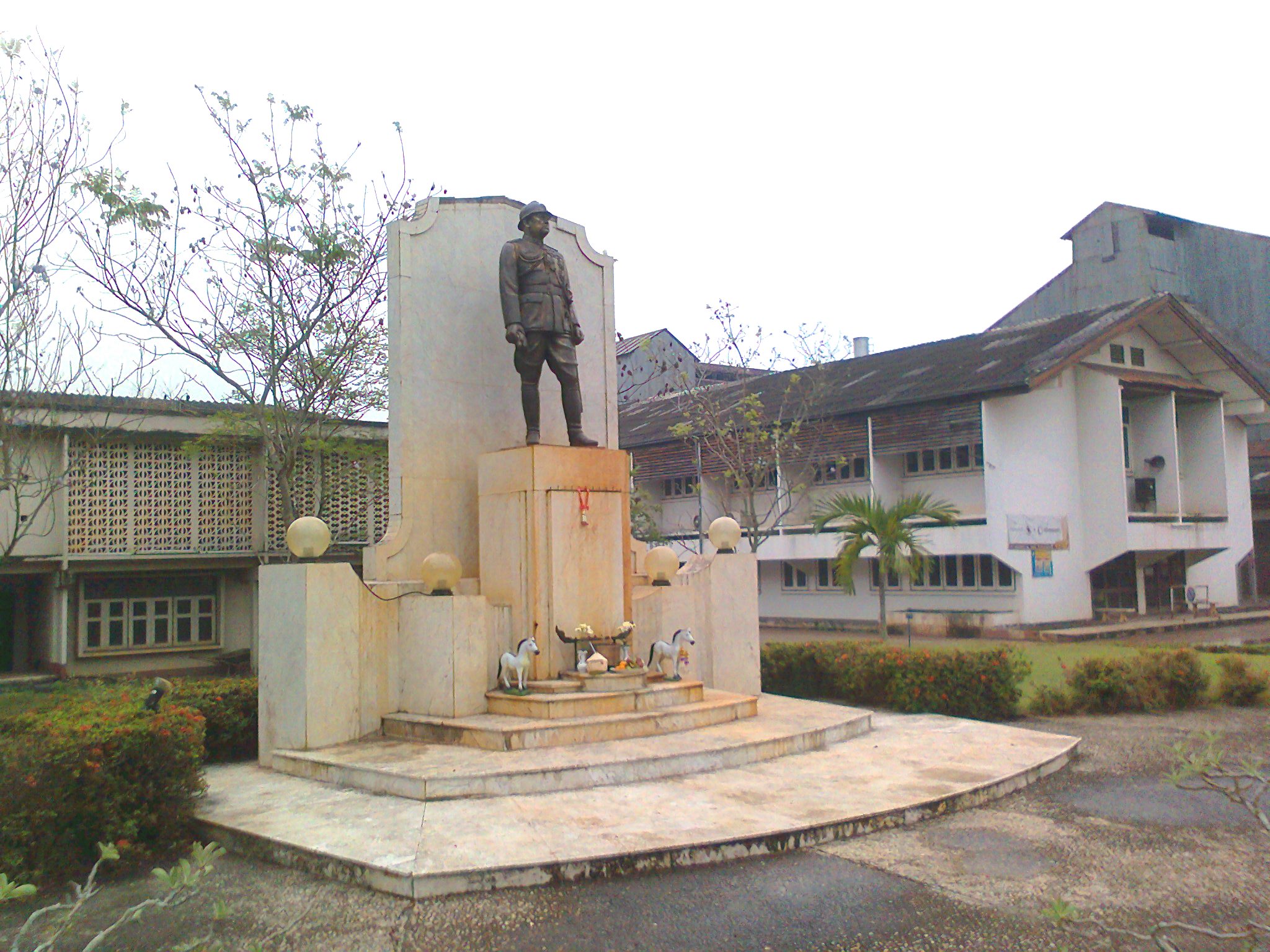 Phahonyothin Road, which runs from Bangkok to the border of Burma in the north, is named after Phraya Phahon. Formerly known as Prachathipatai Road, Field Marshal Plaek Phibunshongkhram renamed the road in his honour. A hospital in Kanchanaburi Province, Paholpolpayuhasena Hospital is also named in his honour. A Royal Thai Army artillery base in Lopburi Province bore the name of General Phraya Phahon until 2019 when, at the order of the king Vajiralongkorn, it was renamed King Bhumibol base. Long-standing statues of Phraya Phahon and Field Marshal Plaek Phibunsongkhram installed at the base are to be removed and replaced by a statue of King Bhumibol.