Peameal bacon (also known as cornmeal bacon) is a wet-cured, unsmoked back bacon made from trimmed lean boneless pork loin rolled in cornmeal. It is found mainly in Southern Ontario. Toronto pork packer William Davies, who came to Canada from England in 1854, is credited with its development. The name "peameal bacon" derives from the historic practice of rolling the cured and trimmed boneless loin in dried and ground yellow peas to extend shelf life. Since the end of World War I, it has been rolled in ground yellow cornmeal. Peameal bacon sandwiches, consisting of cooked peameal bacon on a kaiser roll and sometimes topped with mustard or other toppings, are often considered a signature dish of Toronto, particularly from Toronto's St. Lawrence Market. 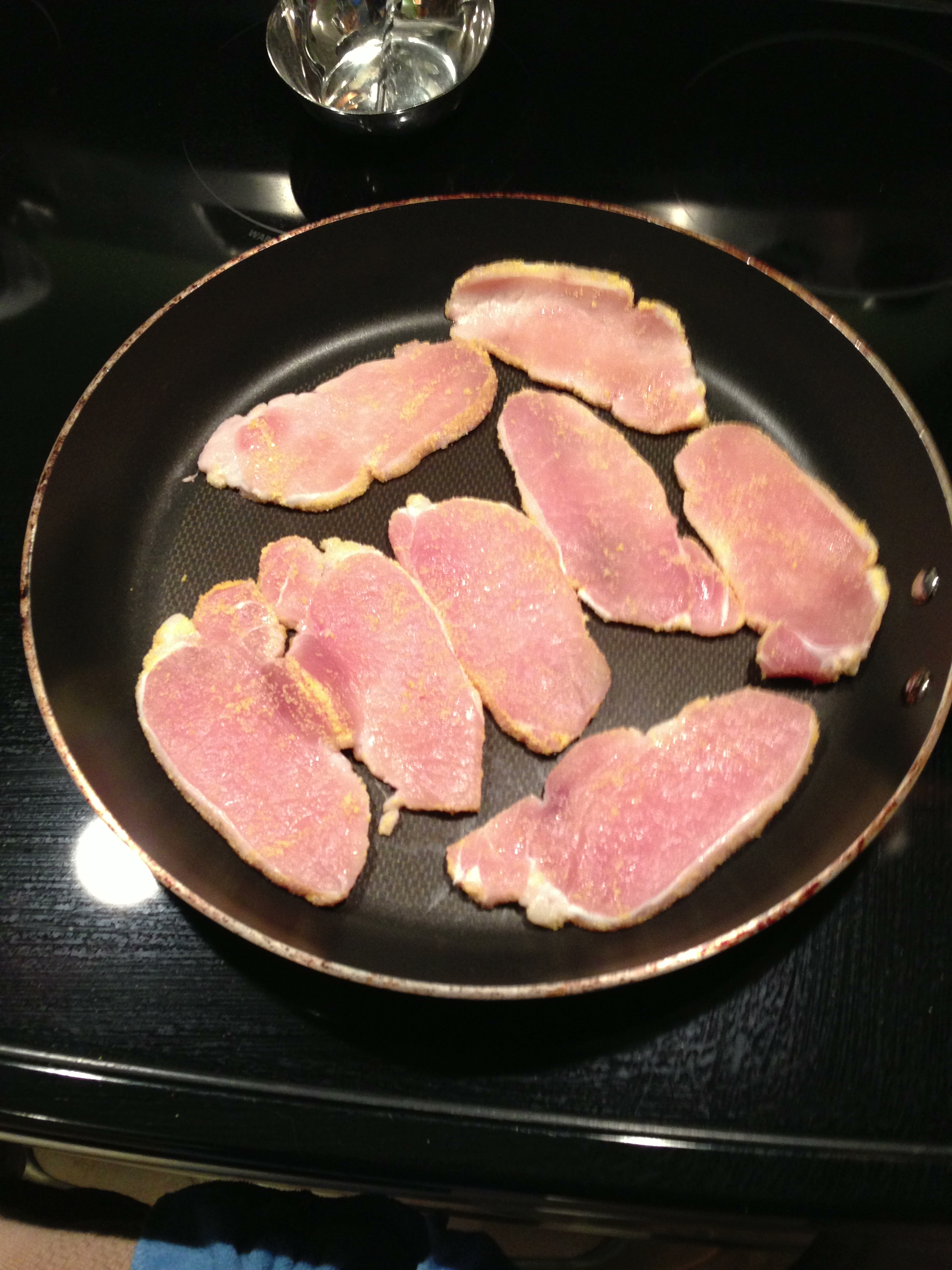 Peameal bacon is a type of unsmoked back bacon. It is made from centre-cut pork loin, trimmed of fat, wet-cured in a salt-and-sugar brine and rolled in cornmeal. It can be sliced and cooked on a grill, griddled or fried; or roasted then sliced and served. The brining process makes it nearly impossible to overcook. The low fat content keeps it juicy, and the cornmeal gives it a crispy edge. Cooked peameal bacon has a mild salty-sweet flavour and tastes more like fresh ham (when compared to smoked back bacon or side bacon). The cooked slices have been described as resembling small pork cutlets. It is eaten for breakfast, lunch or dinner, served in slices or as an ingredient in a pork dish. The name ''peameal'' comes from the dried yellow peas that were ground into meal and packed around the meat to preserve it in the Victorian era. This has since been replaced by cornmeal, but the original name remains. Peameal bacon is rarely found outside of Southern Ontario, and is often simply referred to as "back bacon". Similarly, a peameal bacon sandwich is often called "back bacon on a bun". Some Americans refer to peameal bacon as ''Canadian bacon''. However, this should not be confused with ''Canadian-style bacon'' or ''Canadian back bacon'', which are terms used by the US-based North American Meat Institute for an American style of smoked back bacon. This may be sold in US supermarkets as "Canadian bacon", though it is not in any way Canadian. Americans use these names to differentiate from what they call ''American bacon'', a US term for side bacon ( streaky bacon).

England's Wiltshire Bacon has been well known since as early as 1765. The bacon is brined, "dusted" or "mopped' in peameal, and may be mildly smoked or unsmoked. On March 30, 1905, an ad for "Pea Meal Wiltshire Bacon" appeared in the Montreal Gazette. Throughout April, the same seller also advertised "pea meal ham", "pea meal boneless Breakfast Bacon " and "pea meal Windsor bacon". On Friday, August 25, 1905, an ad for "Pea Meal Bacon" appeared in Winnipeg's Manitoba Morning Free Press. The origins of peameal bacon have not been firmly established. Curing pork with brine has been practiced for centuries, in many parts of the world. Peameal bacon has been linked to pork-packer William Davies and the Toronto-based William Davies Company, though it is uncertain if the process was invented by Davies, an employee, or if it was otherwise acquired by the company. Davies immigrated to Canada from Britain in 1854, and set up a shop in Toronto's St. Lawrence Market. According to Toronto's oral history, Davies sent a side of brine-cured pork loins to relatives in England. To help preserve this shipment, he packed it in ground yellow peas. This was well received, and Davies continued rolling cured loins in pea meal to extend shelf life. The William Davies Company expanded, forming Canada's first major chain of food stores, and becoming the largest pork exporter in the British Empire. By the early 1900s, the company's Front Street plant processed nearly half a million hogs per year. This contributed to Toronto's longstanding nickname of "Hogtown". Following World War I, cornmeal replaced the pea meal crust, due to the former's availability and improved refrigeration practices.

In the 1960s, customers of Joe Hoiner's St. Lawrence Market butcher shop opted for the centre cut of cured peameal loins, leaving him with the ends. He partnered with Elso Biancolin, who ran a bakery shop at the market, and they sliced and fried the bacon ends and sold them on buns. Biancolin's sons, Robert and Maurice, expanded the family's Carousel Bakery during the market's 1977 renovation, and their featured peameal bacon sandwich on a fresh kaiser roll received national and international attention from food critics and TV chefs. It is noted in many tourist guides and visiting chefs often seek it out.

The Carousel Bakery's peameal bacon sandwich is simple, without complicated sauces, toppings or layers. It is composed of slices of peameal bacon cooked on a griddle long enough to crisp, drizzled with honey mustard, served on a soft fresh roll. There are options to add an egg or side bacon. It was served at the inaugural Canadian Comedy Awards in 2000. In 2016, the peameal bacon sandwich was named Toronto's signature dish. This was announced by Mayor John Tory at a local food festival with several versions offered. Peameal bacon sandwiches were included in a wager between Tory and Oakland Mayor Libby Schaaf during the 2019 NBA Finals.