Click Here for Items Related To - Peace of Westphalia
The Peace of Westphalia (german: Westfälischer Friede, ) is the collective name for two peace treaties signed in October 1648 in the Westphalian cities of Osnabrück and Münster. They ended the Thirty Years War and brought peace to the Holy Roman Empire, closing a calamitous period of European history that killed approximately eight million people. The negotiation process was lengthy and complex. Talks took place in two cities, because each side wanted to meet on territory under its own control. A total of 109 delegations arrived to represent the belligerent states, but not all delegations were present at the same time. Two treaties were signed to end each of the overlapping wars: the Peace Treaty of Münster and the Peace Treaty of Osnabrück. These treaties ended the Thirty Years' War (1618–1648) in the Holy Roman Empire, with the Habsburgs (rulers of Austria and Spain) and their Catholic allies on one side, battling the Protestant powers (Sweden, Denmark, and certain Holy Roman principalities) allied with France, which was Catholic but strongly anti-Habsburg under King Louis XIV. Joachim Whaley, a leading English-language historian of the Holy Roman Empire, mentions that later commentators such as Leibniz, Rousseau, Kant, and Schiller eulogized the Peace of Westphalia as the first step towards a universal peace, but he points out that "their projections for the future should not be mistaken for descriptions of reality". Scholars of international relations have identified the Peace of Westphalia as the origin of principles crucial to modern international relations, including the inviolability of borders and non-interference in the domestic affairs of sovereign states. This system became known as Westphalian sovereignty. 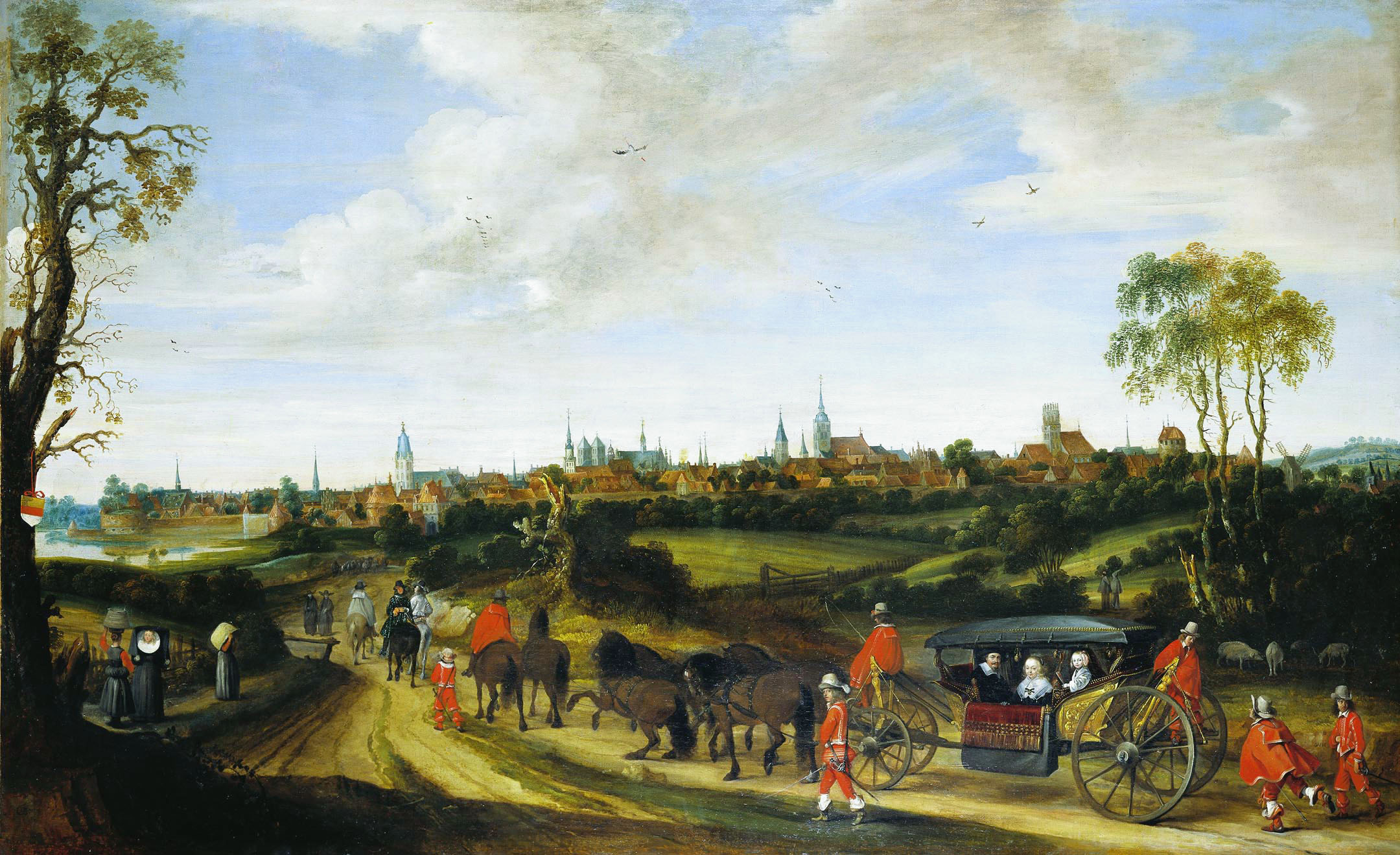 The main peace negotiations took place in Westphalia, in the neighbouring cities of Münster and Osnabrück. Both cities were maintained as neutral and demilitarized zones for the negotiations. In Münster, negotiations took place between the Holy Roman Empire and France, as well as between the Dutch Republic and Spain who on 30 January 1648 signed a peace treaty, that was not part of the Peace of Westphalia. Münster had been, since its re-Catholicisation in 1535, a strictly mono-denominational community. It housed the Chapter of the Prince-Bishopric of Münster. Only Roman Catholic worship was permitted, while Calvinism and Lutheranism were prohibited. Sweden preferred to negotiate with the Holy Roman Empire in Osnabrück, controlled by the Protestant forces. Osnabrück was a bidenominational Lutheran and Catholic city, with two Lutheran churches and two Catholic churches. The city council was exclusively Lutheran, and the burghers mostly so, but the city also housed the Catholic Chapter of the Prince-Bishopric of Osnabrück and had many other Catholic inhabitants. Osnabrück had been subjugated by troops of the Catholic League from 1628 to 1633 and then taken by Lutheran Sweden.

holding an olive branch in her left arm and grasping the tree of knowledge with her right hand.]] The peace negotiations had no exact beginning or end, because the 109 delegations never met in a plenary session. Instead, various delegations arrived between 1643 and 1646 and left between 1647 and 1649. The largest number of diplomats were present between January 1646 and July 1647. Delegations had been sent by 16 European states, 66 Imperial States representing the interests of 140 Imperial States, and 27 interest groups representing 38 groups. * The French delegation was headed by Henri II d'Orléans, Duke of Longueville and further comprised the diplomats Claude d'Avaux and Abel Servien. * The Swedish delegation was headed by Count Johan Oxenstierna and was assisted by Baron Johan Adler Salvius. * The Imperial delegation was headed by Count Maximilian von Trautmansdorff. His aides were: ** In Münster, Johann Ludwig von Nassau-Hadamar and Isaak Volmar. ** In Osnabrück, Johann Maximilian von Lamberg and ''Reichshofrat'' Johann Krane. * Philip IV of Spain was represented by two delegations: ** The Spanish delegation was headed by Gaspar de Bracamonte y Guzmán, and notably included the diplomats and writers Diego de Saavedra Fajardo, and Bernardino de Rebolledo. ** The Franche Comté and the Spanish Netherlands were represented by Joseph de Bergaigne (who died before peace was concluded) and Antoine Brun. * The papal nuncio in Cologne, Fabio Chigi, and the Venetian envoy Alvise Contarini acted as mediators. * Various Imperial States of the Holy Roman Empire also sent delegations. * Brandenburg sent several representatives, including Volmar. * The Dutch Republic sent a delegation of six, including two delegates from the province of Holland (Adriaan Pauw) and Willem Ripperda from one of the other provinces; two provinces were absent. * The Swiss Confederacy was represented by Johann Rudolf Wettstein.

Three separate treaties constituted the peace settlement. * The Peace of Münster was signed by the Dutch Republic and the Kingdom of Spain on 30 January 1648, and was ratified in Münster on 15 May 1648. * Two complementary treaties were signed on 24 October 1648: ** The Treaty of Münster (''Instrumentum Pacis Monasteriensis'', IPM), between the Holy Roman Emperor and France, along with their respective allies ** The Treaty of Osnabrück (''Instrumentum Pacis Osnabrugensis'', IPO), between the Holy Roman Empire and Sweden, along with their respective allies.

thumb|upright=1.35|Holy Roman Empire in 1648 The power asserted by Ferdinand III was stripped from him and returned to the rulers of the Imperial States. The rulers of the Imperial States could henceforth choose their own official religions. Catholics and Protestants were redefined as equal before the law, and Calvinism was given legal recognition as an official religion. The independence of the Dutch Republic, which practiced religious toleration, also provided a safe haven for European Jews. The Holy See was very displeased at the settlement, with Pope Innocent X calling it "null, void, invalid, iniquitous, unjust, damnable, reprobate, inane, empty of meaning and effect for all time" in the bull ''Zelo Domus Dei''.

The main tenets of the Peace of Westphalia were: * All parties would recognise the Peace of Augsburg of 1555, in which each prince would have the right to determine the religion of his own state (the principle of ''cuius regio, eius religio''). The options were Catholicism, Lutheranism, and now Calvinism. * Christians living in principalities where their denomination was ''not'' the established church were guaranteed the right to practice their faith in private, as well as in public during allotted hours. * France and Sweden were recognised as guarantors of the imperial constitution with a right to intercede. It is often argued that the Peace of Westphalia resulted in a general recognition of the exclusive sovereignty of each party over its lands, people, and agents abroad, as well as responsibility for the warlike acts of any of its citizens or agents.

* The Old Swiss Confederacy was formally recognised as independent from the Holy Roman Empire, after decades of ''de facto'' independence. * The Dutch Republic, which had declared its independence from Spain in 1581, was formally recognised as a fully independent state from both Spain and the Holy Roman Empire. * France retained the Bishoprics of Metz, Toul and Verdun near Lorraine, received the cities of the Décapole in Alsace (except for Strasbourg, the Bishopric of Strasbourg, and Mulhouse) and the city of Pignerol near the Spanish Duchy of Milan. * Sweden received an indemnity of five million thalers, which it used primarily to pay its troops. Sweden further received Western Pomerania (thenceforth Swedish Pomerania), Wismar, and the Prince-Bishoprics of Bremen and Verden as hereditary fiefs, thus gaining a seat and vote in the Imperial Diet of the Holy Roman Empire as well as in the Upper Saxon, Lower Saxon and Westphalian circle diets (''Kreistage''). However, the wording of the treaties was ambiguous: :*To escape incorporation into Swedish Bremen-Verden, the city of Bremen had claimed Imperial immediacy. The emperor had granted this request and separated the city from the surrounding Bishopric of Bremen. Sweden launched the Swedish-Bremen wars in 1653/54 in a failed attempt to take the city. :*The treaty did not decide the Swedish-Brandenburgian border in the Duchy of Pomerania. At Osnabrück, both Sweden and Brandenburg had claimed the whole duchy, which had been under Swedish control since 1630 despite legal claims of Brandenburgian succession. While the parties settled for a border in 1653, the underlying conflict continued. :*The treaty ruled that the Dukes of Mecklenburg, owing their re-investiture to the Swedes, cede Wismar and the Mecklenburgian port tolls. While Sweden understood this to include the tolls of all Mecklenburgian ports, the Mecklenburgian dukes as well as the emperor understood this to refer to Wismar only. :*Wildeshausen, a petty exclave of Bremen-Verden and fragile basis for Sweden's seat in the Westphalian circle diet, was also claimed by the Bishopric of Münster. * Bavaria retained the Palatinate's vote in the Electoral College of the Holy Roman Empire, which it was granted by the imperial ban on the Elector Palatine Frederick V in 1623. The Prince Palatine, Frederick's son, was given a ''new'', eighth electoral vote. * The Palatinate was divided between the re-established Elector Palatine Charles Louis (son and heir of Frederick V) and Elector-Duke Maximilian of Bavaria, and thus between the Protestants and Catholics. Charles Louis obtained the Lower Palatinate, along the Rhine, while Maximilian kept the Upper Palatinate, to the north of Bavaria. * Brandenburg-Prussia received Farther Pomerania, and the Bishoprics of Magdeburg, Halberstadt, Kammin, and Minden. * The succession to the Jülich-Cleves-Berg, whose last duke had died in 1609, was clarified. Jülich, Berg, and Ravenstein were given to the Count Palatine of Neuburg, while Cleves, Mark, and Ravensberg went to Brandenburg. * The Prince-Bishopric of Osnabrück would alternate between Catholic and Lutheran bishops, with the Protestant bishops chosen from the cadets of the House of Brunswick-Lüneburg. * Barriers to trade and commerce erected during the war were abolished, and "a degree" of free navigation was guaranteed on the Rhine.

The treaties did not entirely end conflicts arising out of the Thirty Years' War. Fighting continued between France and Spain until the Treaty of the Pyrenees in 1659. The Dutch-Portuguese War had begun during the Iberian Union between Spain and Portugal, as part of the Eighty Years' War, and went on until 1663. Nevertheless, the Peace of Westphalia did settle many outstanding European issues of the time.

Scholars of international relations have identified the Peace of Westphalia as the origin of principles crucial to modern international relations, including the inviolability of borders and non-interference in the domestic affairs of sovereign states. This system became known in the literature as Westphalian sovereignty. Although scholars have challenged the association with the Peace of Westphalia, the debate is still structured around the concept of Westphalian sovereignty. However, scholars have challenged the view that the modern European states system originated with the Westphalian treaties. The treaties do not contain anything in their text about religious freedom, sovereignty, or balance of power that can be construed as international law principles. Constitutional arrangements of the Holy Roman Empire are the only context in which sovereignty and religious equality are mentioned in the text, but they are not new ideas in this context. While the treaties do not contain the basis for the modern laws of nations themselves, they do symbolize the end of a long period of religious conflict in Europe.