Click Here for Items Related To - Partitions of Poland


The Partitions of Poland were three partitions of the Polish–Lithuanian Commonwealth that took place toward the end of the 18th century and ended the existence of the state, resulting in the elimination of sovereign Poland and Lithuania for 123 years. The partitions were conducted by the Habsburg Monarchy, the Kingdom of Prussia, and the Russian Empire, which divided up the Commonwealth lands among themselves progressively in the process of territorial seizures and annexations. The First Partition of Poland was decided on August 5, 1772. Two decades later, Russian and Prussian troops entered the Commonwealth again and the Second Partition was signed on January 23, 1793. Austria did not participate in the Second Partition. The Third Partition of Poland took place on October 24, 1795, in reaction to the unsuccessful Polish Kościuszko Uprising the previous year. With this partition, the Commonwealth ceased to exist. In English, the term "Partitions of Poland" is sometimes used geographically as toponymy, to mean the three parts that the partitioning powers divided the Commonwealth into, namely: the Austrian Partition, the Prussian Partition and the Russian Partition. In Polish, there are two separate words for the two meanings. The consecutive acts of dividing and annexation of Poland are referred to as ' (plural: '), while the term ' (pl. ') means each part of the Commonwealth annexed in 1772–95 becoming part of Imperial Russia, Prussia, or Austria. Following the Congress of Vienna in 1815, the borders of the three partitioned sectors were redrawn; the Austrians established Galicia in the Austrian partition, whereas the Russians gained Warsaw from Prussia and formed an autonomous polity of Congress Poland in the Russian partition. In Polish historiography, the term "Fourth Partition of Poland" has also been used, in reference to any subsequent annexation of Polish lands by foreign invaders. Depending on source and historical period, this could mean the events of 1815, or 1832 and 1846, or 1939. The term "Fourth Partition" in a temporal sense can also mean the diaspora communities that played an important political role in re-establishing the Polish sovereign state after 1918. 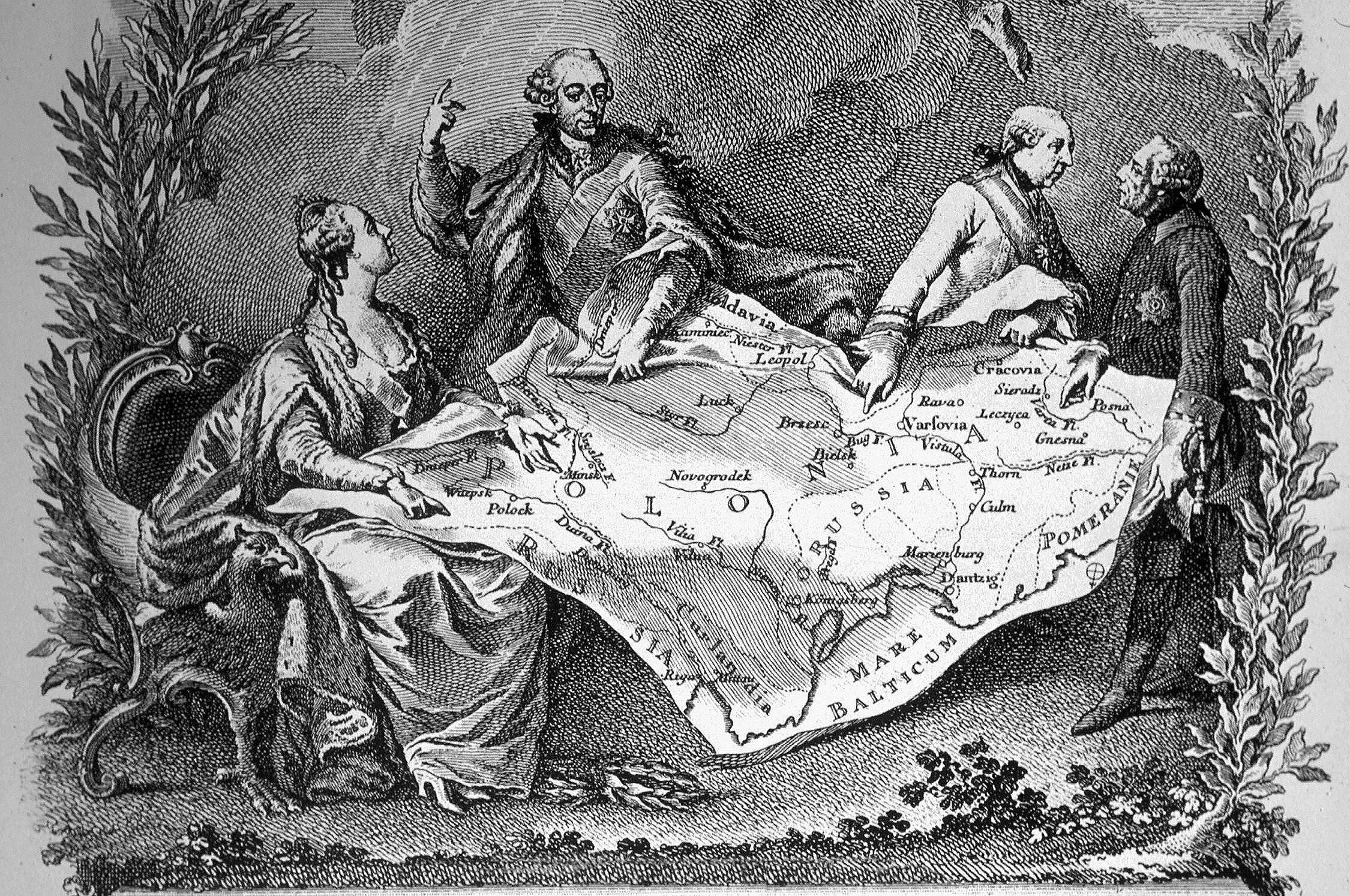 thumb|Włodzimierz Tetmajer, ''Allegory of Dead Poland'', St. Nicholas Cathedral, [[Kalisz ]] During the reign of [[Władysław IV Vasa|Władysław IV]] (1632–48), the ' was developed, a policy of parliamentary procedure based on the assumption of the political equality of every "[[Szlachta|gentleman/Polish nobleman]]," with the corollary that unanimous consent was needed for all measures. A single member of parliament's belief that a measure was injurious to his own constituency (usually simply his own estate), even after the act had been approved, became enough to strike the act. Thus it became increasingly difficult to undertake action. The ' also provided openings for foreign diplomats to get their ways, through bribing nobles to exercise it. Thus, one could characterise Poland–Lithuania in its final period (mid-18th century) before the partitions as already in a state of disorder and not a completely sovereign state, and almost as a vassal state, with Russian tsars effectively choosing Polish kings. This applies particularly to the last Commonwealth King Stanisław August Poniatowski, who for some time had been a lover of Russian Empress Catherine the Great. In 1730 the neighbors of the Polish–Lithuanian Commonwealth ('), namely Prussia, Austria and Russia, signed a secret agreement to maintain the ': specifically, to ensure that the Commonwealth laws would not change. Their alliance later became known in Poland as the "Alliance of the Three Black Eagles" (or s Treaty''), because all three states used a black eagle as a state symbol (in contrast to the white eagle, a symbol of Poland). The Commonwealth had been forced to rely on Russia for protection against the rising Kingdom of Prussia, which demanded a slice of the northwest in order to unite its Western and Eastern portions; this would leave the Commonwealth with a Baltic coast only in Latvia and Lithuania. Catherine had to use diplomacy to win Austria to her side. The Commonwealth had remained neutral in the Seven Years' War (1756–1763), yet it sympathized with the alliance of France, Austria, and Russia, and allowed Russian troops access to its western lands as bases against Prussia. Frederick II retaliated by ordering enough Polish currency counterfeited to severely affect the Polish economy. Through the Polish nobles whom Russia controlled and the Russian Minister to Warsaw, ambassador and Prince Nicholas Repnin, Empress Catherine the Great forced a constitution on the Commonwealth at the so-called Repnin Sejm of 1767, named after ambassador Repnin, who effectively dictated the terms of that Sejm (and ordered the capture and exile to Kaluga of some vocal opponents of his policies, including bishop Józef Andrzej Załuski