Click Here for Items Related To - Parliament of India


The Parliament of India (IAST: ) is the supreme legislative body of the Republic of India. It is a bicameral legislature composed of the President of India and the two houses: the Rajya Sabha (Council of States) and the Lok Sabha (House of the People). The President in his role as head of legislature has full powers to summon and prorogue either house of Parliament or to dissolve Lok Sabha. The president can exercise these powers only upon the advice of the Prime Minister and his Union Council of Ministers. Those elected or nominated (by the President) to either house of Parliament are referred to as Members of Parliament (MP). The Members of Parliament, Lok Sabha are directly elected by the Indian public voting in Single-member districts and the Members of Parliament, Rajya Sabha are elected by the members of all State Legislative Assembly by proportional representation. The Parliament has a sanctioned strength of 543 in Lok Sabha and 245 in Rajya Sabha including the 12 nominees from the expertise of different fields of science, culture, art and history. The Parliament meets at Sansad Bhavan in New Delhi.

The Constituent Assembly of India was elected to write the Constitution of India. Following India's independence from Britain in 1947, its members served as the nation's first Parliament.

The ''Parliament House'' (''Sansad Bhavan'') is located in New Delhi. It was designed by Edwin Lutyens and Herbert Baker, who were responsible for planning and construction of New Delhi by British government. The construction of building took six years and the opening ceremony was performed on 18 January 1927 by the then Viceroy and Governor-General of India, Lord Irwin. The construction costs for the building were . The parliament is tall, in diameter and covers an area of . The Central Hall consists of the chambers of Lok Sabha, Rajya Sabha, and the Library hall. Surrounding these three chambers is the four-storeyed circular structure providing accommodations for members and houses Parliamentary committees, offices and the Ministry of Parliamentary Affairs. 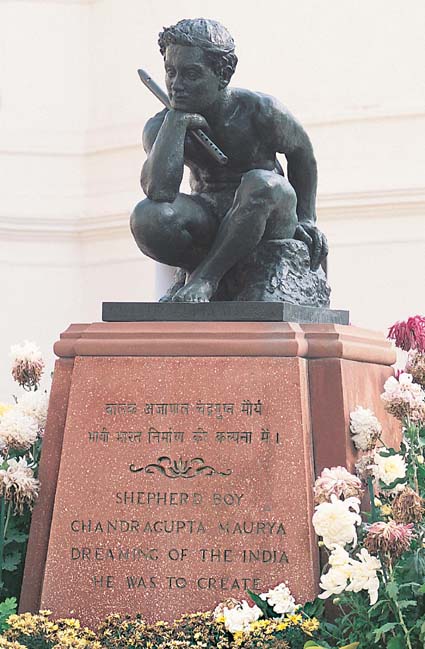 General layout of the Parliament

The centre and the focus of the building is the Central Hall. It consists of chambers of the Lok Sabha, the Rajya Sabha, and the Library Hall and between them lie garden courts. Surrounding these three chambers is the four-storeyed circular structure providing accommodations for ministers, chairmen, parliamentary committees, party offices, important offices of Lok Sabha and Rajya Sabha Secretariat, and also the offices of the Ministry of Parliamentary Affairs. The Central Hall is circular in shape and the dome is in diameter. It is a place of historical importance. The Indian Constitution was framed in the Central Hall. The Central Hall was originally used in the library of the erstwhile Central Legislative Assembly and the Council of States. In 1946, it was converted and refurbished into Constituent Assembly Hall. At present, the Central Hall is used for holding joint sittings of both the houses of parliament and also used for address by the President in the commencement of first session after each general election.

Proposal for a new building

A new Parliament building may replace the existing complex. The new building is being considered on account of the stability concerns regarding the current complex. A committee to suggest alternatives to the current building has been set up by the Former Speaker, Meira Kumar. The present building, an 85-year-old structure suffers from inadequacy of space to house members and their staff and is thought to suffer from structural issues. The building also needs to be protected because of its heritage tag. Prime Minister Narendra Modi laid the foundation and performed the ground-breaking ceremony for the new Parliament Building on 10 December 2020. With an estimated cost of 971 crore, the building is expected to be completed by 2022.

The Indian Parliament consists of two houses called the Lok Sabha and the Rajya Sabha with the President of India acting as their head. 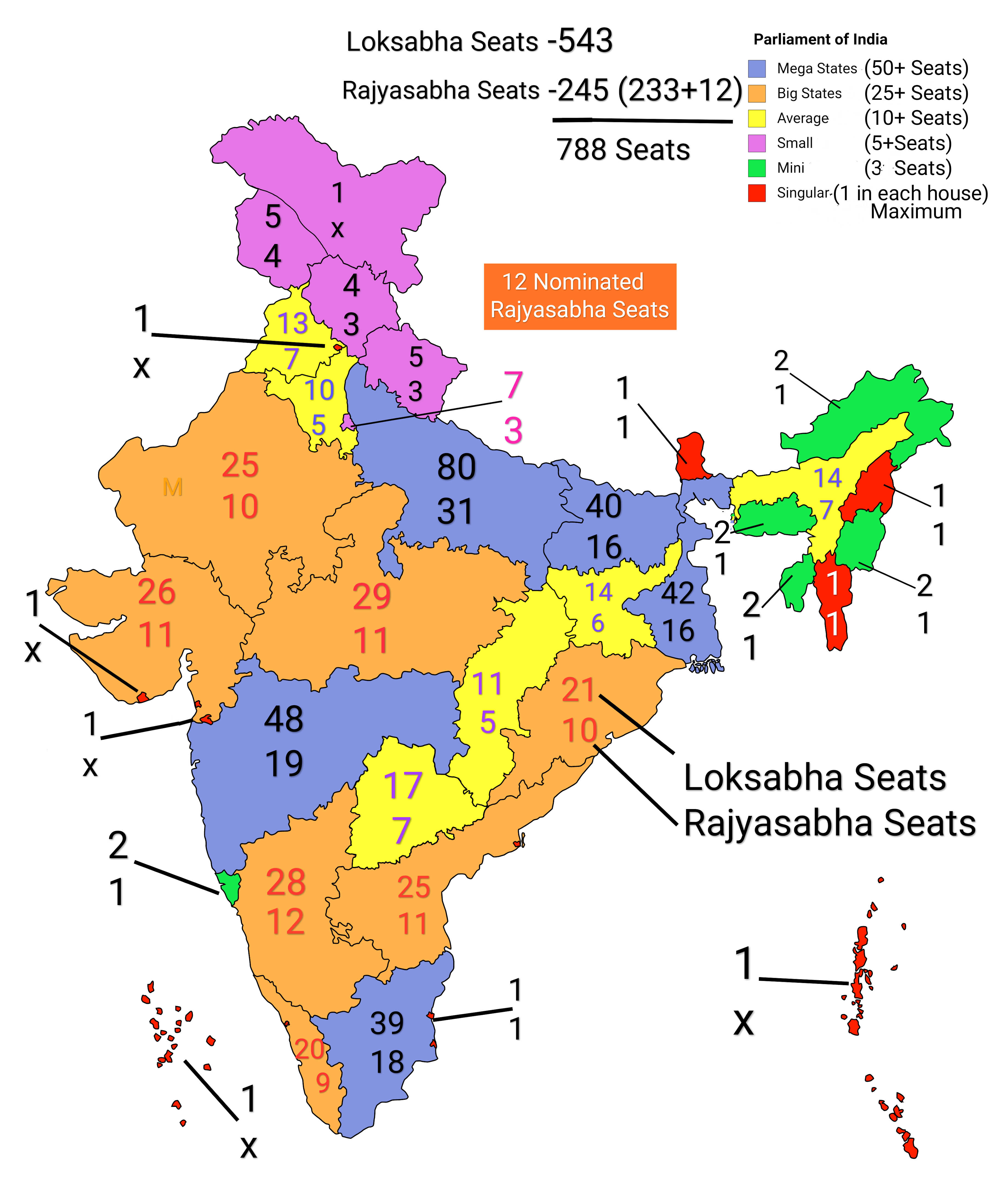 Lok Sabha (House of the People) or the lower house has 543 members. 543 members are directly elected by citizens of India on the basis of universal adult franchise representing Parliamentary constituencies across the country. Between 1952 and 2020, 2 additional members of the Anglo-Indian community were also nominated by the President of India on the advice of Government of India, which was abolished in January 2020 by the 104th Constitutional Amendment Act, 2019. Every citizen of India who is over 18 years of age, irrespective of gender, caste, religion, or race and is otherwise not disqualified, is eligible to vote for the Lok Sabha. The Constitution provides that the maximum strength of the House be 552 members. It has a term of five years. To be eligible for membership in the Lok Sabha, a person must be a citizen of India and must be 25 years of age or older, mentally sound, should not be bankrupt, and should not be criminally convicted. The total elective membership is distributed among the states in such a way that the ratio between the number of seats allotted to each state and the population of the state is, so far as practicable, the same for all states.

Rajya Sabha (Council of States) or the upper house is a permanent body not subject to dissolution. One third of the members retire every second year, and are replaced by newly elected members. Each member is elected for a term of six years. Its members are indirectly elected by members of legislative bodies of the states. The Rajya Sabha can have a maximum of 250 members. It currently has a sanctioned strength of 245 members, of which 233 are elected from States and Union Territories and 12 are nominated by the President. The number of members from a state depends on its population. The minimum age for a person to become a member of Rajya Sabha is 30 years.

The period during which the House meets to conduct its business is called a session. The Constitution empowers the President to summon each House at such intervals that there should not be more than a six-month gap between the two sessions. Hence the Parliament must meet at least twice a year. In India, the Parliament conducts three sessions each year: * ''Budget session'': January/February to May * ''Monsoon session'': July to August/September * ''Winter session'': November to December

Legislative proposals are brought before either house of the Parliament in the form of a bill. A bill is the draft of a legislative proposal, which, when passed by both houses of Parliament and assented to by the President, becomes an Act of Parliament. Money bills must originate in the Lok Sabha. The Council of States can only make recommendations over the bills to the House, within a period of fourteen days.

On 13 December 2001, Indian Parliament was attacked by an Islamic terrorist group. The perpetrators were Lashkar-e-Taiba (Let) and Jaish-e-Mohammed (JeM) terrorists. The attack led to the deaths of five terrorists, six Delhi Police personnel, two Parliament Security Services personnel, and a gardener, which totalled 14 fatalities. The incident led to increased tensions between India and Pakistan, resulting in the India–Pakistan standoff.

On 16 November 2016, during the winter session of Indian Parliament, the sittings in both Upper and Lower Houses of Parliament observed strong opposition and uproar by political parties on demonetisation (note ban) initiative by the Narendra Modi Government.