The Parang River (also called Para River and Pare Chu) is an upstream tributary of the Sutlej River, that originates in the Indian state of Himachal Pradesh and ends in Himachal Pradesh again, but flows through Ladakh and Tibet before doing so. The origin of the river is near the Parang La pass in the Spiti subdistrict. After its circuitous journey, it joins the Spiti River near Sumdo and the combined river then joins Sutlej.

The name "Para River", which becomes ''Pare Chu'' in Tibetan, is based on the shepherds' ground of ''Para'' in Karab-Bargyok (in the Tibetan part of its course). In Kinnauri, the river was called ''Parati''. The Tibetans and Ladakhis were more likely to call it by the name of locale above their own, as the "Rupshu river" or "Tsotso river", Tsotso being the name of the valley in West Tibet through which it flows. Henry Strachey regarded it as the western headwater of Sutlej River, and called it "Rupshu Sutlej" or "Tsotso Sutlej". 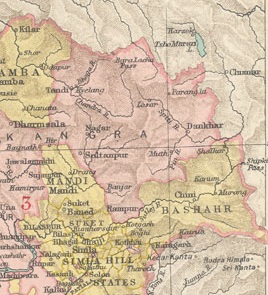 The Parang River originates in Spiti and ends in Spiti, taking a circuitous route through Ladakh and Ngari Khorsum (West Tibet). British geographer Alexander Cunningham wries: Interestingly, Spiti River flows by the Parang Pass only 10 km to its west. The Parang River joins it about 80 km downstream at Sumdo, near the Tibet border. Cunningham states that the Spiti and Parang rivers are roughly equal in volume. But Parang is only a "very large rushing torrent" while Spiti is very deep rapid river. After the union of the two at Sumdo (the old Chang-Razing), the combined river flows south for about , where it joins the Sutlej.