Pacific Northwest English (also known, in American linguistics, as Northwest English) is a variety of North American English spoken in the U.S. states of Washington and Oregon, sometimes also including Idaho and the Canadian province of British Columbia. Current studies remain inconclusive about whether Pacific Northwest English is a dialect of its own, separate from Western American English or even California English or Standard Canadian English, with which it shares its major phonological features. The dialect region contains a highly diverse and mobile population, which is reflected in the historical and continuing development of the variety.

The linguistic traits that flourish throughout the Pacific Northwest attest to a culture that transcends boundaries. Historically, this hearkens back to the early years of colonial expansion by the British and Americans, when the entire region was considered a single area and people of all different mother tongues and nationalities used Chinook Jargon (along with English and French) to communicate with each other. Until the Oregon Treaty of 1846, it was identified as being either Oregon Country (by the Americans) or Columbia (by the British). Linguists immediately after World WarII tended to find few patterns unique to the Western region, as among other things, Chinook Jargon and other "slang words" (despite Chinook Jargon being an actual separate language in and of itself, individual words from it like "salt chuck", "muckamuck", "siwash" and "tyee" were and still are used in Pacific Northwest English) were pushed away in favour of having a "proper, clean" dialect. Several decades later, linguists began noticing emerging characteristics of Pacific Northwest English, although it remains close to the standard American accent. 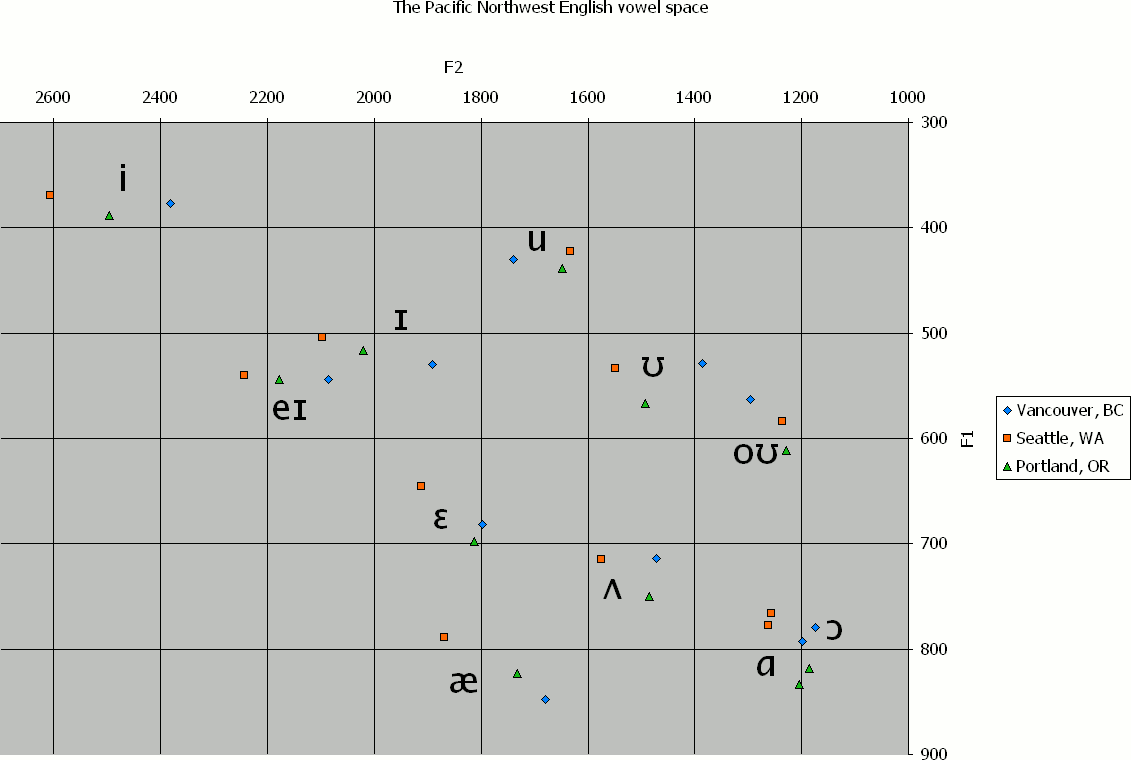 Commonalities with both Canada and California

* Pacific Northwest English has all the phonological mergers typical of North American English and, more specifically, all the mergers typical of Western American English, including the ''cot–caught'' merger. * Younger speakers of Pacific Northwest English also show features of the Canadian/California Vowel Shift, which move front vowels through a lowering of the tongue: ** is backed and sometimes rounded to become . Most Pacific Northwest speakers have undergone the ''cot–caught'' merger. A notable exception occurs with some speakers born before roughly the end of World WarII. * There are also conditional raising processes of open front vowels. These processes are often more extreme than in Canada and the North Central United States. ** Before the velar nasal , becomes . This change makes for minimal pairs such as ''rang'' and ''rain'', both having the same vowel , differing from ''rang'' in other varieties of English. ** Among some speakers in Portland and southern Oregon, is sometimes raised and diphthongized to or before the nasal consonants and . This is typical throughout the U.S. **While raising is present in Canadian, Californian and Pacific Northwest English, differences exist between the groups most commonly presenting these features. raising is more common in younger Canadian speakers and less common in younger Washingtonian speakers.

These commonalities are shared with Canada and the North Central United States which includes the Minnesota accent. * Traditional and older speakers may show certain vowels, such as as in ''boat'' and as in ''bait'', with qualities much closer to monophthongs ( and ) than the diphthongs typical of most of the U.S. * , and, in the northern Pacific Northwest, , become before the voiced velar plosive : ''egg'' and ''leg'' are pronounced to rhyme with ''plague'' and ''vague'', a feature shared by many northern Midwestern dialects and with the Utah accent. In addition, sometimes bag will be pronounced ''bayg''.

* Back vowels of the California Shift: The Canadian/California Shift developing in Pacific Northwest English also includes these additional features only reminiscent of California English, but not Canadian English (especially among working-class young-adult females): ** The close central rounded vowel or close back unrounded vowel for , is found in Portland and some areas of Southern Oregon, but is generally not found further north, where the vowel remains the close back rounded . ** In speakers born around the 1960s, there is a tendency to move the tongue forward in the first element of the diphthong . This is reminiscent also of Midland, Mid-Atlantic, and Southern U.S. English. This fronting does not appear before and , for example, in the word ''home''. * Absence of Canadian raising: For most speakers, both and remain lax before voiceless obstruents, although some variation has been reported. This likens the Pacific Northwest accent with Californian accents, and contrasts it with Canadian and some other American dialects (such as Philadelphia English).

* Some speakers perceive or produce the pairs and close to each other, for example, resulting in a merger between ''pen'' and ''pin'', most notably for some speakers in Eugene, Oregon and Spokane, Washington.

Several English terms originated in or are largely unique to the region: * ''cougar:'' mountain lion * ''duff:'' forest litter * ''(high) muckamuck:'' an important person or person of authority, usually a pompous one (from Chinook Jargon, where it means "eats a lot; much food") * ''potato bug:'' woodlouse * ''salt chuck:'' the ocean (from Chinook Jargon, where it means "salt water" or "the ocean"; today used on the radio). * ''spendy:'' expensive * ''sunbreak:'' a passage of sunlight in the clouds during dark, rainy weather (typical west of the Cascade Mountains) *''spodie:'' an outdoor high school party at which a mixture of alcoholic beverages (often with chopped fruit added as well) is sold by the cup and drunk (largely unique to the Seattle area). *''tolo:'' Sadie Hawkins dance