Oxford () is a city in England. It is the county town and only city of Oxfordshire. In 2017, its population was estimated at 152,450. It is northwest of London, southeast of Birmingham, and northeast of Bristol. The city is home to the University of Oxford, the oldest university in the English-speaking world, and has buildings in every style of English architecture from late Anglo-Saxon. Oxford's industries include motor manufacturing, education, publishing, information technology and science.

Oxford was first settled by the Anglo-Saxons and was initially known as Oxnaford, meaning "ford of the oxen", as referenced in Florence of Worcester's ''Chronicon ex chronicis''. A river crossing for oxen began around AD 900. In the 10th century, Oxford became an important military frontier town between the kingdoms of Mercia and Wessex and was raided by Danes. In 1002, many Danes were killed in Oxford during the St. Brice's Day massacre ordered by Æthelred the Unready. The skeletons of more than thirty suspected victims were unearthed in 2008 during the course of building work at St John's College. The ‘massacre’ was a contributing factor to King Sweyn I of Denmark’s invasion of England in 1003 and the sacking of Oxford by the Danes in 1004. Oxford was heavily damaged during the Norman Invasion of 1066. Following the conquest, the town was assigned to a governor, Robert D'Oyly, who ordered the construction of Oxford Castle to confirm Norman authority over the area. The castle has never been used for military purposes and its remains survive to this day. D'Oyly set up a monastic community in the castle consisting of a chapel and living quarters for monks (''St George in the Castle''). The community never grew large but it earned its place in history as one of Britain's oldest places of formal education. It was there that in 1139 Geoffrey of Monmouth wrote his ''History of the Kings of Britain'', a compilation of Arthurian legends. Additionally, there is evidence of Jews living in the city as early as 1141, and during the 12th century the Jewish community is estimated to have numbered about 80–100. The city was besieged during The Anarchy in 1142. In 1191, a city charter stated in Latin, Oxford's prestige was enhanced by its charter granted by King Henry II, granting its citizens the same privileges and exemptions as those enjoyed by the capital of the kingdom; and various important religious houses were founded in or near the city. Oxford's status as a liberty obtained from this period until the 19th century. A grandson of King John established Rewley Abbey for the Cistercian Order; and friars of various orders (Dominicans, Franciscans, Carmelites, Augustinians and Trinitarians) all had houses of varying importance at Oxford. Parliaments were often held in the city during the 13th century. The Provisions of Oxford were instigated by a group of barons led by Simon de Montfort; these documents are often regarded as England's first written constitution. Richard I of England (reigned 6 July 1189 – 6 April 1199) and John, King of England (reigned 6 April 1199 – 19 October 1216) the sons of Henry II of England, were both born at Beaumont Palace in Oxford, on 8 September 1157 and 24 December 1166 respectively. A plaque in Beaumont Street commemorates these events.

The University of Oxford is first mentioned in 12th-century records. Of the hundreds of aularian houses that sprang up across the city, only St Edmund Hall () remains. What put an end to the halls was the emergence of colleges. Oxford's earliest colleges were University College (1249), Balliol (1263) and Merton (1264). These colleges were established at a time when Europeans were starting to translate the writings of Greek philosophers. These writings challenged European ideology, inspiring scientific discoveries and advancements in the arts, as society began to see itself in a new way. These colleges at Oxford were supported by the Church in the hope of reconciling Greek philosophy and Christian theology. The relationship between "town and gown" has often been uneasy – as many as 93 students and townspeople were killed in the St Scholastica Day Riot of 1355. The sweating sickness epidemic in 1517 was particularly devastating to Oxford and Cambridge where it killed half of both cities' populations, including many students and dons. Christ Church Cathedral, Oxford is unique in combining a college chapel and a cathedral in one foundation. Originally the Priory Church of St Frideswide, the building was extended and incorporated into the structure of the Cardinal's College shortly before its refounding as Christ Church in 1546, since when it has functioned as the cathedral of the Diocese of Oxford. The Oxford Martyrs were tried for heresy in 1555 and subsequently burnt at the stake, on what is now Broad Street, for their religious beliefs and teachings. The three martyrs were the bishops Hugh Latimer and Nicholas Ridley, and the archbishop Thomas Cranmer. The Martyrs' Memorial stands nearby, round the corner to the north on St. Giles.

During the English Civil War, Oxford housed the court of Charles I in 1642, after the king was expelled from London. The town yielded to Parliamentarian forces under General Fairfax in the Siege of Oxford of 1646. It later housed the court of Charles II during the Great Plague of London in 1665–66. Although reluctant to do so, he was forced to evacuate when the plague got too close. The city suffered two serious fires in 1644 and 1671.

In 1790, the Oxford Canal connected the city with Coventry. The Duke's Cut was completed by the Duke of Marlborough in 1789 to link the new canal with the River Thames; and, in 1796, the Oxford Canal company built its own link to the Thames, at Isis Lock. In 1844, the Great Western Railway linked Oxford with London via Didcot and Reading, and other rail routes soon followed. In the 19th century, the controversy surrounding the Oxford Movement in the Anglican Church drew attention to the city as a focus of theological thought. A permanent military presence was established in the city with the completion of Cowley Barracks in 1876. Local government in Oxford was reformed by the Municipal Corporations Act 1835, and the boundaries of the borough were extended to include a small area east of the River Cherwell. The boundaries were further extended in 1889 to add the areas of Grandpont and New Hinksey, south of the Thames, which were transferred from Berkshire to Oxfordshire. At the same time Summertown and the western part of Cowley were also added to the borough. In 1890 Oxford became a county borough.

Oxford Town Hall was built by Henry T. Hare; the foundation stone was laid on 6 July 1893 and opened by the future King Edward VII on 12 May 1897. The site has been the seat of local government since the Guild Hall of 1292 and though Oxford is a city and a Lord Mayoralty, the building is still called by its traditional name of "Town Hall". 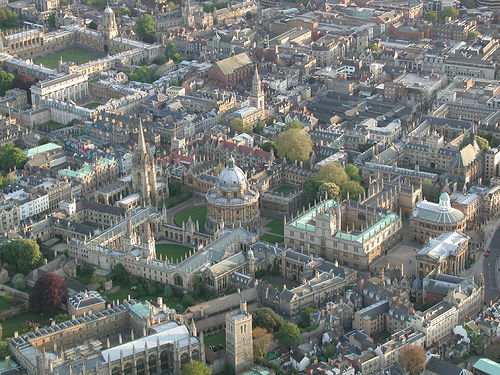 During the First World War, the population of Oxford changed. The number of University members was significantly reduced as students, fellows and staff enlisted. Some of their places in college accommodation were taken by soldiers in training. Another reminder of the ongoing war was found in the influx of wounded and disabled soldiers, who were treated in new hospitals housed in buildings such as the university's Examination School, the town hall and Somerville College. By the early 20th century, there was rapid industrial and population growth, with the printing and publishing industries becoming well established by the 1920s. In 1929 the boundaries of the city were extended to include the suburbs of Headington, Cowley and Iffley to the east, and Wolvercote to the north.