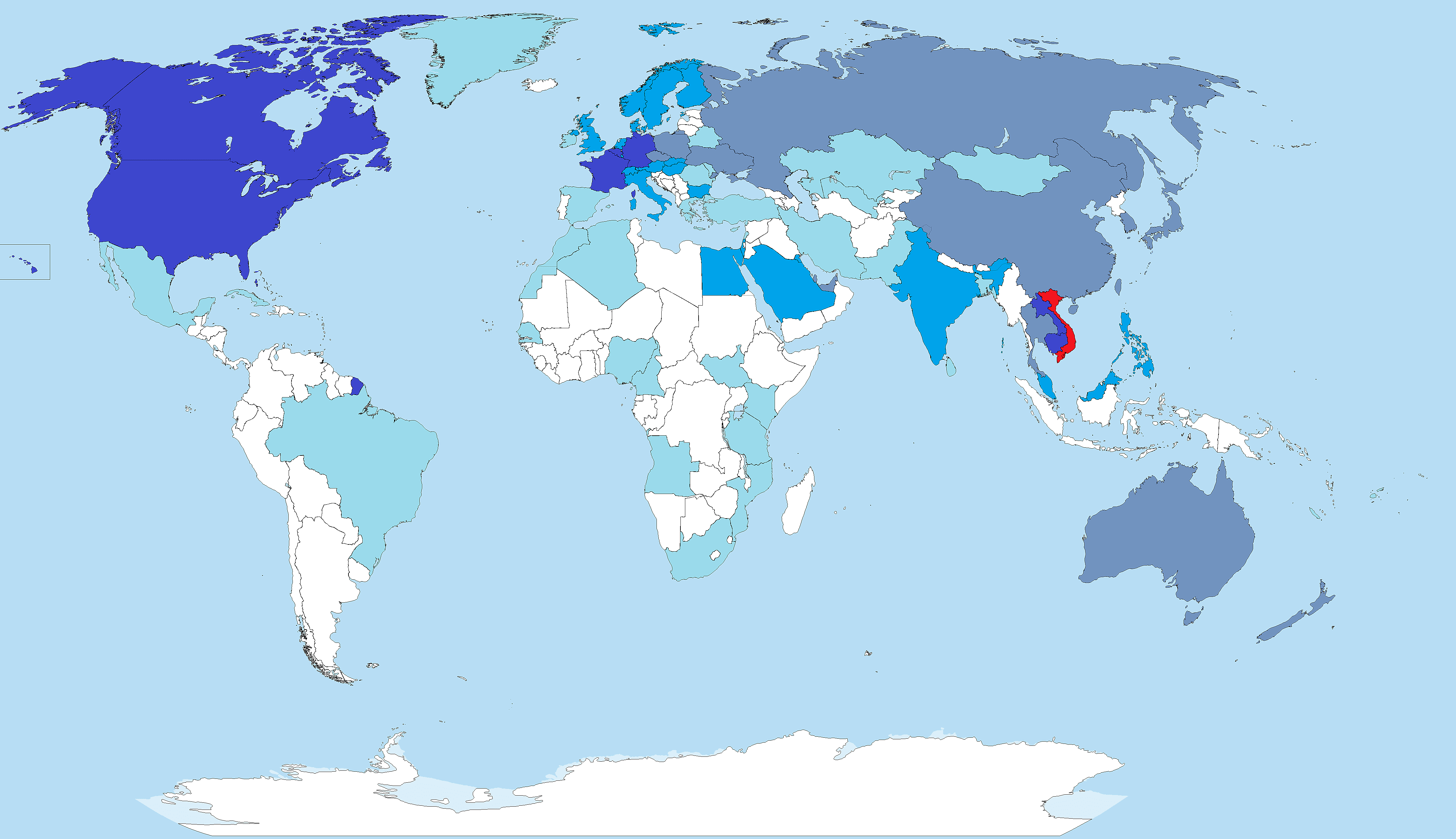 Overseas Vietnamese can be divided into distinct categories: *People who left Vietnam before 1975. This population usually resides in neighboring countries, such as Cambodia, Laos, Thailand and China, as well as those who settled in Korea and Japan before French colonization. During the French colonial era, many Vietnamese also migrated to France as students or workers. These people are not often considered Việt Kiều by people residing in Vietnam. *People who fled Vietnam after the Vietnam War and their descendants. This is the largest category of Overseas Vietnamese. The majority of this category live in North America, the European Union, Hong Kong, and Australia. *Vietnamese working and studying in the former Soviet bloc who opted to stay there after the Soviet collapse. This is the second-largest Vietnamese diaspora group, found mainly in Europe (particularly in countries formerly aligned with the Soviet Union in the Warsaw Pact and/or Comecon) as well as the Russian Federation. *Economic migrants who work in other Asian countries such Taiwan, Japan and South Korea. This includes Vietnamese women who married men from these countries through illegal marriage agencies. These agencies are the source of social tension, controversy, and have been criticized for resembling human trafficking. Many women in this category suffer violence by their foreign husbands. *Vietnamese living in the Middle East and North Africa, in particular the United Arab Emirates, Egypt, Morocco, Qatar and Kuwait. Many members of this population studied overseas and sought work in other countries. According to a 2014 report by the Associated Press, "women make up at least two-thirds of workers who leave the country", and sometimes leave fathers behind to care for children. The report also said that "the total amount of remittances sent back from all Vietnamese workers overseas now exceeds $2 billion a year." In addition, as of 2020, 190,000 Vietnamese were studying abroad. Most were studying in Australia (30,000), the United States (29,000), Canada (21,000), the UK (12,000) and Asian countries (70,000).

Vietnamese immigrants in the United States comprise one of the largest immigrant communities in the world. The community grew from 231,000 in 1980 to perhaps as many as 1.3 million in 2012. Most immigrants fled to the United States as refugees in the wake of the Vietnam War, arriving in three distinct waves from the 1960s to the 1990s. The first wave was comprised mainly of South Vietnamese military personnel and citizens targeted by communist forces because of their associations with both the South Vietnamese government and the United States. The second wave, which occurred in the 1970s, brought rural Vietnamese to the United States in what became known as the "boat people crisis." This wave was characterized by people who lacked the education or wealth of the first wave, as well as a large number of ethnic Chinese who were fleeing persecution by the Vietnamese government. The final wave took place in the 1980s into the 1990s. A majority of these immigrants were the children of Vietnamese mothers and American soldiers, and they greatly increased the population of Vietnamese in America. By 2012, this population comprised 31% of the 4 million foreign-born population from South East Asia, 11% of the 11.9 million foreign-born from Asia, and 3% of the 40.8 million overall foreign-born population. Mass migration from Vietnam began in response to the Vietnamese government in the 1970s. During the North Vietnamese military offensive of mid-March 1975, many South Vietnamese citizens were pushed farther and farther south into Saigon. On April 30, the final U.S. troops and diplomats left Saigon and the country came under the control of the Provisional Revolutionary Government. As a result the North Vietnam Army (N.V.A.) took control of the country and many Vietnamese became refugees and immigrated to the United States. By 1979, the United Nations recognized that the Vietnamese refugee crisis was a "world problem", which led to the First Geneva Conference on Indochinese Refugees in July, 1979. The United States, United Kingdom, Australia, France, and Canada each agreed to accept refugees for resettlement, and Vietnamese refugee entries to the U.S. to peaked from 1979 to 1982. That year, President Jimmy Carter doubled the number of Southeast Asian refugees accepted into the United States, from 7,000 to 14,000. However, 62% of Americans said they disapproved of the measure. The South Vietnamese coming to the U.S. in the second wave did not come willingly. They were forced out of their homes by the N.V.A. and sought refuge in the United States. Many of these people felt betrayed by the U.S.'s handling of the situation in Vietnam and felt conflicted about making the journey there. Nearly all the Vietnamese migrants to the United States during this time were listed as refugees, not as immigrants, because of the forced manner in which they had been exiled to the United States; 99% of Vietnamese newcomers to the United States who received a Green Card in 1982 fell into this category.

Vietnamese constitute about 5% of the population of Cambodia, making them the largest ethnic minority. Vietnamese people began migrating to Cambodia as early as the 17th century. In 1863, when Cambodia became a French colony, many Vietnamese were brought to Cambodia by the French to work on plantations and occupy civil servant positions. During the Lon Nol regime (1970–1975) and Pol Pot regime (1975–1979), many Vietnamese living in Cambodia were killed. Others were either repatriated or escaped to Vietnam or Thailand. During the ten-year Vietnamese occupation of Cambodia from 1979 to 1989 many Vietnamese who had previously lived in Cambodia returned and along with them came friends and relatives. Many former South Vietnamese soldiers also came to Cambodia, fleeing persecution from the communist government. Many living in Cambodia usually speak Vietnamese as their first language and have introduced the Cao Dai religion, with 2 temples built in Cambodia. Many Cambodians learned Vietnamese as a result. They are concentrated in the Kratie and Takeo provinces of Cambodia, where villages predominately consist of ethnic Vietnamese. Vietnamese people are also the top tourist group in Cambodia, with 130,831, up 19% as of 2011. 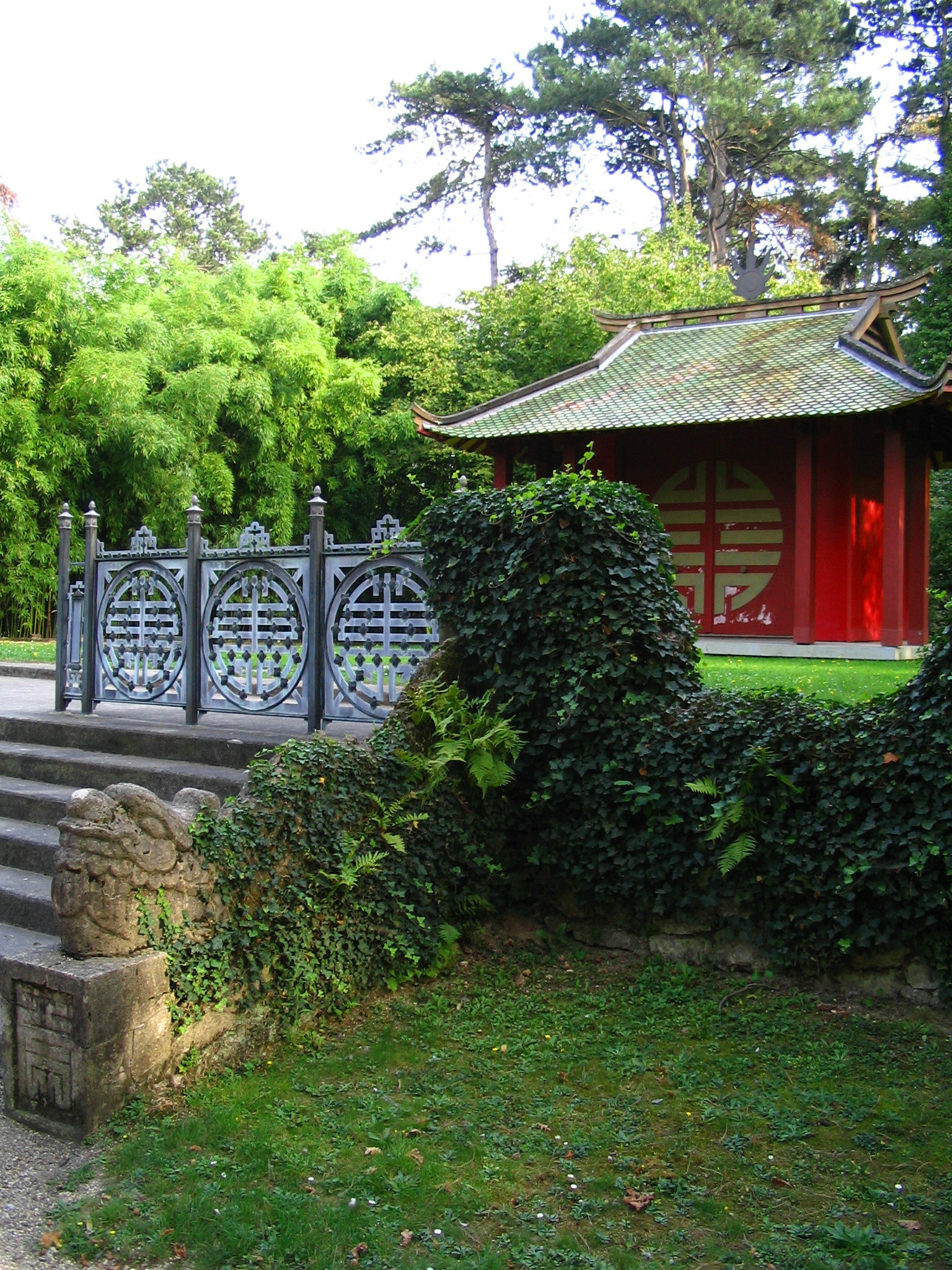 The number of ethnic Vietnamese living in France is estimated to be about 350,000 as of 2014. France was the first Western country where Vietnamese migrants settled due to the colonization of Vietnam by France that began in the late 1850s. The colonial period saw a significant representation of Vietnamese students in France, as well as professional and blue-collar workers, with many settling permanently. The country would continue to be home to by far the largest overseas Vietnamese population outside Asia until the 1980s, when a higher number of Vietnam War refugees resettled in the United States. A number of Vietnamese loyal to the colonial government and Vietnamese married to French colonists emigrated to France following Vietnam's independence through the Geneva Accords in 1954. During the Vietnam War, a significant number of students and those involved in commerce from South Vietnam continued to arrive in France. The largest influx of Vietnamese people, however, arrived in France as refugees after the Fall of Saigon and end of the Vietnam War in 1975. Vietnamese refugees who settled in France usually had higher levels of education and affluence than Vietnamese refugees who settled in North America, Australia, and the rest of Europe, likely due to cultural familiarity with French culture and that many affluent Vietnamese families had already settled in France. Most Vietnamese in France live in Paris and the surrounding Île-de-France area, but a significant number also reside in major urban centers in the south-east of the country, primarily Marseille, Lyon, and Toulouse. Earlier Vietnamese migrants also settled in the cities of Lille and Bordeaux. In contrast to their counterparts in the English-speaking world, the Vietnamese in France have a higher degree of assimilation, due to cultural, historical, and linguistic knowledge of the host country. The community is still strongly attached to its homeland while being well integrated in French society. The generation of Vietnamese refugees continues to hold on to traditional values. The later generations of French-born Vietnamese strongly identify with French culture rather than Vietnamese, as most were raised and brought up in the French system rather than the Vietnamese one. French media and politicians generally view the Vietnamese community as a "model minority", in part because they are represented as having a high degree of integration within the French society as well as having high economic and academic success. Furthermore, Vietnamese in France on average have a high level of educational attainment and success, a legacy dating back to the colonial era when affluent families and those with connections to the French colonial government sent their children to France to study. The Vietnamese community in France is divided between those who oppose the communist Hanoi government and those who are supportive of it. The pro-communist camp is the more established of the two and was the larger group until the 1970s, consisting mainly of students, workers, and long-established immigrants who arrived before 1975 and their descendants. Meanwhile, the anti-communist camp consists of students, refugees and middle-class immigrants from the former south, who began to arrive after Vietnamese independence in 1954 but most of whom fled Vietnam after 1975. This division in the community has been present since the 1950s when some Vietnamese students and workers in France supported and praised the communist Vietminh's policies back home, while Vietnamese loyal to the colonial or non-communist governments and immigrated to France were largely anti-communist. This political rift remained minor until the Fall of Saigon in 1975 when staunchly anti-communist refugees from South Vietnam arrived and established community networks and institutions. The two camps have contradictory political goals and ideologies, and members of one group rarely interact with those of the other group. Such political divisions have prevented the Vietnamese in France from forming a strong, unified community in their host nation, as their counterparts have in North America and Australia (1980).

Vietnamese people in Australia constitute one of the largest ethnic groups in Australia, with 294,798 people claiming Vietnamese ancestry at the 2016 census. First generation Vietnamese Australians who came as refugees varied widely in income and social class. Of those from the Vietnam War era, many Vietnamese Australians are white collar professionals, while others work primarily in blue-collar jobs. Australian-born Vietnamese tend to earn high levels of educational attainment and success. In 2001, the labour participation rate for Vietnamese refugees was 61%, about the same as that of Australian born residents (63%). Around three quarters of ethnic Vietnamese live in New South Wales (40.7%) and Victoria (36.8%). The surname, Nguyễn, is the seventh most common family name in Australia (second to Smith in the Melbourne phone book).

According to the 2018 census, 10,086 New Zealanders identify themselves with the Vietnamese ethnic group. Many of them came to New Zealand to escape religious persecution or war.

According to the 2016 census, Canada has 240,615 people who identify as ethnic Vietnamese. The majority of Vietnamese people in Canada reside in the provinces of Ontario and Quebec, with some having lived in Quebec before 1975. Vancouver is also another major destination for newly-arrived Vietnamese immigrants since 1980, including Vietnamese of Chinese descent, with the city having a large Chinese population.

Vietnamese comprise the largest Asian ethnic group in Germany. As of 2011, there are about 137,000 people of Vietnamese descent in Germany.