In music, the organ is a keyboard instrument of one or more pipe divisions or other means for producing tones, each played with its own keyboard, played either with the hands on a keyboard or with the feet using pedals.

The organ is a relatively old musical instrument, dating from the time of Ctesibius of Alexandria (285–222 BC), who invented the water organ. It was played throughout the Ancient Greek and Ancient Roman world, particularly during races and games. During the early medieval period it spread from the Byzantine Empire, where it continued to be used in secular (non-religious) and imperial court music, to Western Europe, where it gradually assumed a prominent place in the liturgy of the Catholic Church. Subsequently, it re-emerged as a secular and recital instrument in the Classical music tradition.

Pipe organs use air moving through pipes to produce sounds. Since the 16th century, pipe organs have used various materials for pipes, which can vary widely in timbre and volume. Increasingly hybrid organs are appearing in which pipes are augmented with electric additions. Great economies of space and cost are possible especially when the lowest (and largest) of the pipes can be replaced. Non-piped organs include: * pump organs, named also reed organs or harmoniums, which like the accordion and harmonica (or "mouth organ") use air to excite free reeds; * electronic organs (both analog and digital), notably the Hammond organ, which generate electronically produced sound through one or more loudspeakers. Mechanical organs include the barrel organ, water organ, and Orchestrion. These are controlled by mechanical means such as pinned barrels or book music. Little barrel organs dispense with the hands of an organist and bigger organs are powered in most cases by an organ grinder or today by other means such as an electric motor.

The pipe organ is the largest musical instrument. These instruments vary greatly in size, ranging from a cubic meter to a height reaching five floors, and are built in churches, synagogues, concert halls, and homes. Small organs are called "positive" (easily placed in different locations) or "portative" (small enough to carry while playing). The pipes are divided into ranks and controlled by the use of hand stops and combination pistons. Although the keyboard is not expressive as on a piano and does not affect dynamics (it is binary; pressing a key only turns the sound on or off), some divisions may be enclosed in a swell box, allowing the dynamics to be controlled by shutters. Some organs are totally enclosed, meaning that all the divisions can be controlled by one set of shutters. Some special registers with free reed pipes are expressive. It has existed in its current form since the 14th century, though similar designs were common in the Eastern Mediterranean from the early Byzantine period (from the 4th century AD) and precursors, such as the hydraulic organ, have been found dating to the late Hellenistic period (1st century BC). Along with the clock, it was considered one of the most complex human-made mechanical creations before the Industrial Revolution. Pipe organs range in size from a single short keyboard to huge instruments with over 10,000 pipes. A large modern organ typically has three or four keyboards (manuals) with five octaves (61 notes) each, and a two-and-a-half octave (32-note) pedal board. Wolfgang Amadeus Mozart called the organ the "King of instruments". Some of the biggest instruments have 64-foot pipes (a foot here means "sonic-foot", a measure quite close to the English measurement unit) and it sounds to an 8 Hz frequency fundamental tone. Perhaps the most distinctive feature is the ability to range from the slightest sound to the most powerful, plein-jeu impressive sonic discharge, which can be sustained in time indefinitely by the organist. For instance, the Wanamaker organ, located in Philadelphia, USA, has sonic resources comparable with three simultaneous symphony orchestras. Another interesting feature lies in its intrinsic "polyphony" approach: each set of pipes can be played simultaneously with others, and the sounds mixed and interspersed in the environment, not in the instrument itself.

Most organs in Europe, the Americas, and Australasia can be found in Christian churches. The introduction of church organs is traditionally attributed to Pope Vitalian in the 7th century. Due to its simultaneous ability to provide a musical foundation below the vocal register, support in the vocal register, and increased brightness above the vocal register, the organ is ideally suited to accompany human voices, whether a congregation, a choir, or a cantor or soloist. Most services also include solo organ repertoire for independent performance rather than by way of accompaniment, often as a prelude at the beginning the service and a postlude at the conclusion of the service. Today this organ may be a pipe organ (see above), a digital or electronic organ that generates the sound with digital signal processing (DSP) chips, or a combination of pipes and electronics. It may be called a church organ or classical organ to differentiate it from the theatre organ, which is a different style of instrument. However, as classical organ repertoire was developed for the pipe organ and in turn influenced its development, the line between a church and a concert organ became harder to draw.

In the late 19th century and early 20th century, symphonic organs flourished in secular venues in the United States and the United Kingdom, designed to replace symphony orchestras by playing transcriptions of orchestral pieces. Symphonic and orchestral organs largely fell out of favor as the ''orgelbewegung'' (organ reform movement) took hold in the middle of the 20th century, and organ builders began to look to historical models for inspiration in constructing new instruments. Today, modern builders construct organs in a variety of styles for both secular and sacred applications.

The theatre organ or cinema organ was designed to accompany silent movies. Like a symphonic organ, it is made to replace an orchestra. However, it includes many more gadgets, such as mechanical percussion accessories and other imitative sounds useful in creating movie sound accompaniments such as auto horns, doorbells, and bird whistles. It typically features the Tibia pipe family as its foundation stops and the regular use of a tremulant possessing a depth greater than that on a classical organ. Theatre organs tend not to take nearly as much space as standard organs, relying on extension (sometimes called unification) and higher wind pressures to produce a greater variety of tone and larger volume of sound from fewer pipes. Unification gives a smaller instrument the capability of a much larger one, and works well for monophonic styles of playing (chordal, or chords with solo voice). The sound is, however, thicker and more homogeneous than a classically designed organ. In the USA the American Theater Organ Society (ATOS) has been instrumental in programs to preserve examples of such instruments.

A chamber organ is a small pipe organ, often with only one manual, and sometimes without separate pedal pipes that is placed in a small room, that this diminutive organ can fill with sound. It is often confined to chamber organ repertoire, as often the organs have too few voice capabilities to rival the grand pipe organs in the performance of the classics. The sound and touch are unique to the instrument, sounding nothing like a large organ with few stops drawn out, but rather much more intimate. They are usually tracker instruments, although the modern builders are often building electropneumatic chamber organs. Pre-Beethoven keyboard music may usually be as easily played on a chamber organ as on a piano or harpsichord, and a chamber organ is sometimes preferable to a harpsichord for continuo playing as it is more suitable for producing a sustained tone.

The pump organ, reed organ or harmonium, was the other main type of organ before the development of the electronic organ. It generated its sounds using reeds similar to those of an accordion. Smaller, cheaper and more portable than the corresponding pipe instrument, these were widely used in smaller churches and in private homes, but their volume and tonal range was extremely limited. They were generally limited to one or two manuals; they seldom had a pedalboard. * Harmonium or parlor organ: a reed instrument, usually with several stops and two foot-operated bellows. * American reed organ: similar to the Harmonium, but that works on negative pressure, sucking air through the reeds. * Melodeon: a reed instrument with an air reservoir and a foot-operated bellows. It was popular in the US in the mid-19th century. (This should not to be confused with the diatonic button accordion which is also known as the melodeon.) The chord organ was invented by Laurens Hammond in 1950. It provided chord buttons for the left hand, similar to an accordion. Other reed organ manufacturers have also produced chord organs, most notably Magnus from 1958 to the late 1970s.

Since the 1930s, pipeless electric instruments have been available to produce similar sounds and perform similar roles to pipe organs. Many of these have been bought both by houses of worship and other potential pipe organ customers, and also by many musicians both professional and amateur for whom a pipe organ would not be a possibility. Far smaller and cheaper to buy than a corresponding pipe instrument, and in many cases portable, they have taken organ music into private homes and into dance bands and other new environments, and have almost completely replaced the reed organ. ;Hammond 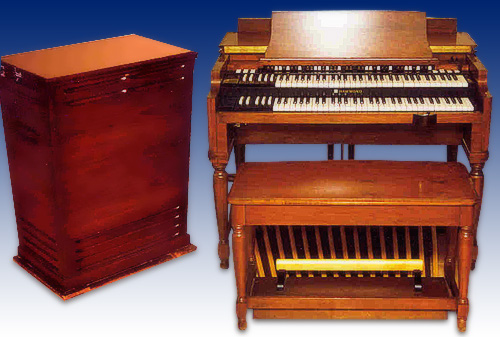 The Hammond organ was the first successful electric organ, released in the 1930s. It used mechanical, rotating tonewheels to produce the sound waveforms. Its system of drawbars allowed for setting volumes for specific sounds, and it provided vibrato-like effects. The drawbars allow the player to choose volume levels. By emphasizing certain harmonics from the overtone series, desired sounds (such as 'brass' or 'string') can be imitated. Generally, the older Hammond drawbar organs had only preamplifiers and were connected to an external, amplified speaker. The Leslie speaker, which rotates to create a distinctive tremolo, became the most popular. Though originally produced to replace organs in the church, the Hammond organ, especially the model B-3, became popular in jazz, particularly soul jazz, and in gospel music. Since these were the roots of rock and roll, the Hammond organ became a part of the rock and roll sound. It was widely used in rock and popular music during the 1960s and 1970s by bands like Emerson, Lake and Palmer, Procol Harum, Santana and Deep Purple. Its popularity resurged in pop music around 2000, in part due to the availability of clonewheel organs that were light enough for one person to carry. ;Allen In contrast to Hammond's electro-mechanical design, Allen Organ Company introduced the first totally electronic organ in 1938, based on the stable oscillator designed and patented by the Company's founder, Jerome Markowitz.