The province is named after Lake Ontario, a term thought to be derived from ', a Huron (Wyandot) word meaning "great lake", or possibly ', which means "beautiful water" in the Iroquoian languages. Ontario has about 250,000 freshwater lakes. 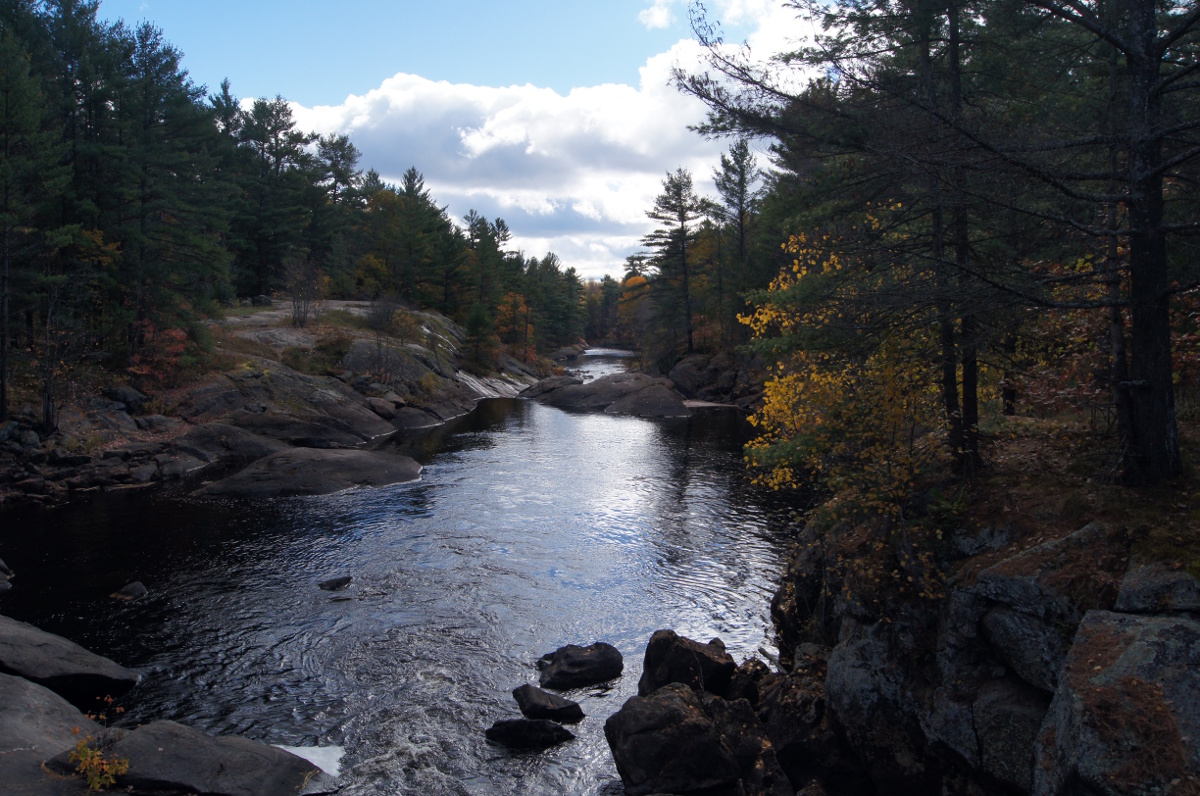 The province consists of three main geographical regions: * The thinly populated Canadian Shield in the northwestern and central portions, which comprises over half the land area of Ontario. Although this area mostly does not support agriculture, it is rich in minerals and partly covered by the Central and Midwestern Canadian Shield forests, studded with lakes and rivers. Northern Ontario is subdivided into two sub-regions: Northwestern Ontario and Northeastern Ontario. * The virtually unpopulated Hudson Bay Lowlands in the extreme north and northeast, mainly swampy and sparsely forested. * Southern Ontario which is further sub-divided into four regions: Central Ontario (although not actually the province's geographic centre), Eastern Ontario, Golden Horseshoe and Southwestern Ontario (parts of which were formerly referred to as Western Ontario). Despite the absence of any mountainous terrain in the province, there are large areas of uplands, particularly within the Canadian Shield which traverses the province from northwest to southeast and also above the Niagara Escarpment which crosses the south. The highest point is Ishpatina Ridge at above sea level in Temagami, Northeastern Ontario. In the south, elevations of over are surpassed near Collingwood, above the Blue Mountains in the Dundalk Highlands and in hilltops near the Madawaska River in Renfrew County. The Carolinian forest zone covers most of the southwestern region of the province. The temperate and fertile Great Lakes-Saint Lawrence Valley in the south is part of the Eastern Great Lakes lowland forests ecoregion where the forest has now been largely replaced by agriculture, industrial and urban development. A well-known geographic feature is Niagara Falls, part of the Niagara Escarpment. The Saint Lawrence Seaway allows navigation to and from the Atlantic Ocean as far inland as Thunder Bay in Northwestern Ontario. Northern Ontario covers approximately 87% of the province's surface area; conversely Southern Ontario contains 94% of the population. Point Pelee is a peninsula of Lake Erie in southwestern Ontario (near Windsor and Detroit, Michigan) that is the southernmost extent of Canada's mainland. Pelee Island and Middle Island in Lake Erie extend slightly farther. All are south of 42°N – slightly farther south than the northern border of California.

Ontario's climate varies by season and location. Three air sources affect it: cold, dry, arctic air from the north (dominant factor during the winter months, and for a longer part of the year in far northern Ontario); Pacific polar air crossing in from the western Canadian Prairies/US Northern Plains; and warm, moist air from the Gulf of Mexico and the Atlantic Ocean. The effects of these major air masses on temperature and precipitation depend mainly on latitude, proximity to major bodies of water and to a small extent, terrain relief. 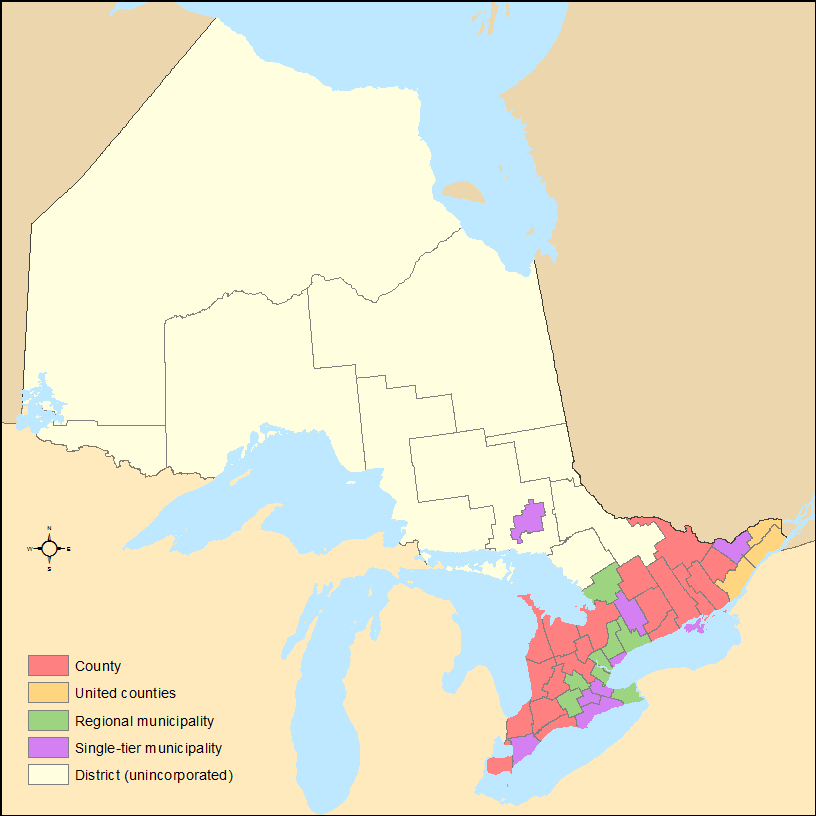 Statistics Canada's measure of a "metro area", the Census Metropolitan Area (CMA), roughly bundles together population figures from the core municipality with those from "commuter" municipalities. Parts of Quebec (including Gatineau) are included in the Ottawa CMA. The population of the Ottawa CMA, in both provinces, is shown. ;Ten largest municipalities by population

Higher education in Ontario includes postsecondary education and skills training regulated by the Ministry of Training, Colleges, and Universities and provided by universities, colleges of applied arts and technology, and private career colleges. The minister is Merrilee Fullerton. The ministry administers laws covering 22 public universities, 24 public colleges (21 Colleges of Applied Arts and Technology (CAATs) and three Institutes of Technology and Advanced Learning (ITALs)), 17 privately funded religious universities, and over 500 private career colleges. The Canadian constitution provides each province with the responsibility for higher education and there is no corresponding national federal ministry of higher education. Within Canadian federalism the division of responsibilities and taxing powers between the Ontario and Canadian governments creates the need for co-operation to fund and deliver higher education to students. Each higher education system aims to improve participation, access, and mobility for students. There are two central organizations that assist with the process of applying to Ontario universities and colleges: the Ontario Universities' Application Centre and Ontario College Application Service. While application services are centralized, admission and selection processes vary and are the purview of each institution. Admission to many Ontario postsecondary institutions can be highly competitive. Upon admission, students may get involved with regional student representation with the Canadian Federation of Students, the Canadian Alliance of Student Associations, the Ontario Undergraduate Student Alliance, or through the College Student Alliance in Ontario.

In 2019, the government of Ontario passed legislation that established the Poet Laureate of Ontario.

In 1973, the first slogan to appear on licence plates in Ontario was "Keep It Beautiful". This was replaced by "Yours to Discover" in 1982, apparently inspired by a tourism slogan, "Discover Ontario", dating back to 1927. Plates with the French equivalent, , were made available to the public beginning in May 2008. (From 1988 to 1990, "Ontario Incredible" gave "Yours to Discover" a brief respite.) A Place to Stand, a Place to Grow is a song commissioned by the government of Ontario for its pavilion in Expo 67, and an unofficial anthem of the province. As a part of the Canada 150 celebrations in 2017, the provincial government unveiled an "updated," rendition of the song.