Old Saxon, also known as Old Low German, was a Germanic language and the earliest recorded form of Low German/Low Saxon (spoken nowadays in Northern Germany, the northeastern Netherlands, southern Denmark, the Americas and parts of Eastern Europe). It is a West Germanic language, closely related to the Anglo-Frisian languages. It is documented from the 8th century until the 12th century, when it gradually evolved into Middle Low German. It was spoken throughout modern northwestern Germany, primarily in the coastal regions and in the eastern Netherlands by Saxons, a Germanic tribe that inhabited the region of Saxony. It partially shares Anglo-Frisian's (Old Frisian, Old English) Ingvaeonic nasal spirant law which sets it apart from Low Franconian and Irminonic languages, such as Dutch, Luxembourgish and German. The grammar of Old Saxon was fully inflected with five grammatical cases (nominative, accusative, genitive, dative, and instrumental), three grammatical numbers (singular, plural, and dual) and three grammatical genders (masculine, feminine, and neuter). The dual forms occurred in the first and second persons only and referred to groups of two. Historically, Old Saxon and Old Dutch were considered to be distinct dialects of an otherwise unitary language rather than two languages, primarily because they were linked through a dialect continuum spanning the modern Netherlands and Germany. However, while these two languages both shared the same historical origins and some very similar writing styles, Old Saxon shows a slightly reduced morphology compared to Old Dutch, which retained some grammatical distinctions that Old Saxon abandoned. There are also various differences in their phonological evolution, Old Saxon being classified as an Ingvaeonic language, whereas Old Dutch is one of the Istvaeonic languages.

Relation with other West Germanic languages

In the Middle Ages, a dialect continuum existed between Old Dutch and Old Saxon, a continuum which has only recently been interrupted by the simultaneous dissemination of standard languages within each nation and the dissolution of folk dialects. Although they share some features, a number of differences separate Old Saxon, Old English, and Old Dutch. One such difference is the Old Dutch utilization of ''-a'' as its plural a-stem noun ending, while Old Saxon and Old English employ ''-as'' or ''-os''. However, it seems that Middle Dutch took the Old Saxon a-stem ending from some Middle Low German dialects, as modern Dutch includes the plural ending ''-s'' added to certain words. Another difference is the so-called "unified plural": Old Saxon, like Old Frisian and Old English, has one verb form for all three persons in the plural, whereas Old Dutch retained three distinct forms (reduced to two in Middle Dutch). Old Saxon (or Old Low German) probably evolved primarily from Ingvaeonic dialects in the West Germanic branch of Proto-Germanic in the 5th century. However, Old Saxon, even considered as an Ingvaeonic language, is not a pure Ingvaeonic dialect like Old Frisian and Old English, the latter two sharing some other Ingvaeonic characteristics, which Old Saxon lacked. This, in addition to the large number of West-Germanic features that Old Saxon displayed, had led some philologists to mistakenly think that Old Dutch and Old Saxon were variations of the same language, and that Old Saxon was an Istvaeonic language.

Old Saxon naturally evolved into Middle Low German over the course of the 11th and 12th centuries, with a great shift from Latin to Low German writing happening around 1150, so that the development of the language can be traced from that period. The most striking difference between Middle Low German and Old Saxon is in a feature of speech known as vowel reduction, which took place in most other West Germanic languages and some Scandinavian dialects such as Danish, reducing all unstressed vowels to schwa. Thus, such Old Saxon words like ''gisprekan'' (spoken) or ''dagō'' (days' – gen. pl.) became ''gesprēken ''and ''dāge''.

Old Saxon did not participate in the High German consonant shift, and thus preserves stop consonants ''p'', ''t'', ''k'' that have been shifted in Old High German to various fricatives and affricates. The Germanic diphthongs ''ai'', ''au'' consistently develop into long vowels ''ē'', ''ō'', whereas in Old High German they appear either as ''ei'', ''ou'' or ''ē'', ''ō'' depending on the following consonant. Old Saxon, alone of the West Germanic languages except for Frisian, consistently preserves Germanic ''-j-'' after a consonant, e.g. "savior" ( goh|heilant, ang|hǣlend, got|háiljands). Germanic umlaut, when it occurs with short ''a'', is inconsistent, e.g. or "to have" ( ang|habban). This feature was carried over into the descendant-language of Old Saxon, Middle Low German, where e.g. the adjective ''krank'' (sick, ill) had the comparative forms ''krenker'' and ''kranker''. Apart from the ''e'', however, the umlaut is not marked in writing.

The table below lists the consonants of Old Saxon. Phonemes written in parentheses represent allophones and are not independent phonemes. Notes: * The voiceless spirants , , and gain voiced allophones (, , and ) when between vowels. This change is only faithfully reflected in writing for (represented with letters such as and ). The other two allophones continued to be written as before. *Fricatives were devoiced again word-finally. Beginning in the later Old Saxon period, stops became devoiced word-finally as well. * Most consonants could be geminated. Notably, geminated gave , and geminated probably gave . Geminated resulted in . * Germanic ''*h'' is retained as in these positions and thus merges with devoiced .

Notes: * Long vowels were rare in unstressed syllables and mostly occurred due to suffixation or compounding.

Notes: * The closing diphthongs and sometimes occur in texts (especially in Genesis), probably under the influence of Franconian or High German dialects, where they replace Old Saxon developments and (which evolved from Proto-Germanic and ). * The situation for the front opening diphthongs is somewhat unclear in some texts. Words written with ''io'' in the Heliand, the most extensive record of Old Saxon writing, are often found written variably with ''ia'' or even ''ie'' in most other texts, notably the later ones. The diphthong eventually merges into in almost every Middle Low German dialect. * There also existed 'long' diphthongs , and . These were, however, treated as two-syllable sequences of a long vowel followed by a short one, not proper diphthongs.

Unlike modern English, but like Old English, Old Saxon is an inflected language, rich in morphological diversity. It kept several distinct cases from Proto-Germanic: the nominative, accusative, genitive, dative and (vestigially in the oldest texts) instrumental. Old Saxon also had three grammatical numbers (singular, and dual, and plural) and three grammatical genders (masculine, feminine, and neuter). The dual forms occurred in the first and second persons only and referred to groups of exactly two.

Old Saxon nouns were inflected in very different ways following their classes. Here are the endings for ''dag'', "day" an a-stem masculine noun: At the end of the Old Saxon period, distinctions between noun classes began to disappear, and endings from one were often transferred to the other declension, and vice versa. This happened to be a large process, and the most common noun classes started to cause the least represented to disappear. As a result, in Middle Low German, only the former weak n-stem and strong a-stem classes remained. These two noun inflection classes started being added to words not only following the historical belonging of this word, but also following the root of the word.

The Old Saxon verb inflection system reflects an intermediate stage between Old English and Old Dutch, and further Old High German. Unlike Old High German and Old Dutch, but similarly to Old English, it did not preserve the three different verb endings in the plural, all featured as ''-ad'' (also ''-iad'' or ''-iod'' following the different verb inflection classes). Like Old Dutch, it had only two classes of weak verb, with only a few relic verbs of the third weak class (namely four verbs: libbian, seggian, huggian and hebbian). This table sums up all the seven Old Saxon strong verb classes and the three weak verb classes: It should be noticed that the third weak verb class includes only four verbs (namely libbian, seggian, huggian and hebbian); it is a remnant of an older and larger class that was kept in Old High German.

Old Saxon syntax is mostly different from that of English. Some were simply consequences of the greater level of nominal and verbal inflection – e.g., word order was generally freer. In addition: *The default word order was verb-second, very close to that of modern Dutch or modern German. *There was no ''do''-support in questions and negatives. *Multiple negatives could stack up in a sentence and intensify each other (negative concord), which is not always the case in modern English, modern Dutch, or modern German. *Sentences with subordinate clauses of the type "when X, Y" (e.g. "When I got home, I ate dinner.") did not use a ''wh-''type conjunction, but rather used a ''th-''type correlative conjunction (e.g. ''thô X, thô Y'' in place of "when X, Y"). The ''wh-''type conjunctions were used only as interrogative pronouns and indefinite pronouns. *Similarly, ''wh-'' forms were not used as relative pronouns (as in "the man who saw me" or "the car which I bought"). Instead, an indeclinable word ''the'' was used, often in conjunction with the definite article (which was declined for case, number and gender). 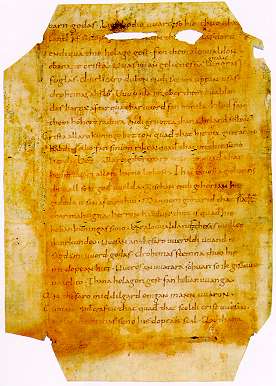 A poetic version of the Lord's Prayer in the form of the traditional Germanic alliterative verse is given in Old Saxon below as it appears in the ''Heliand''.