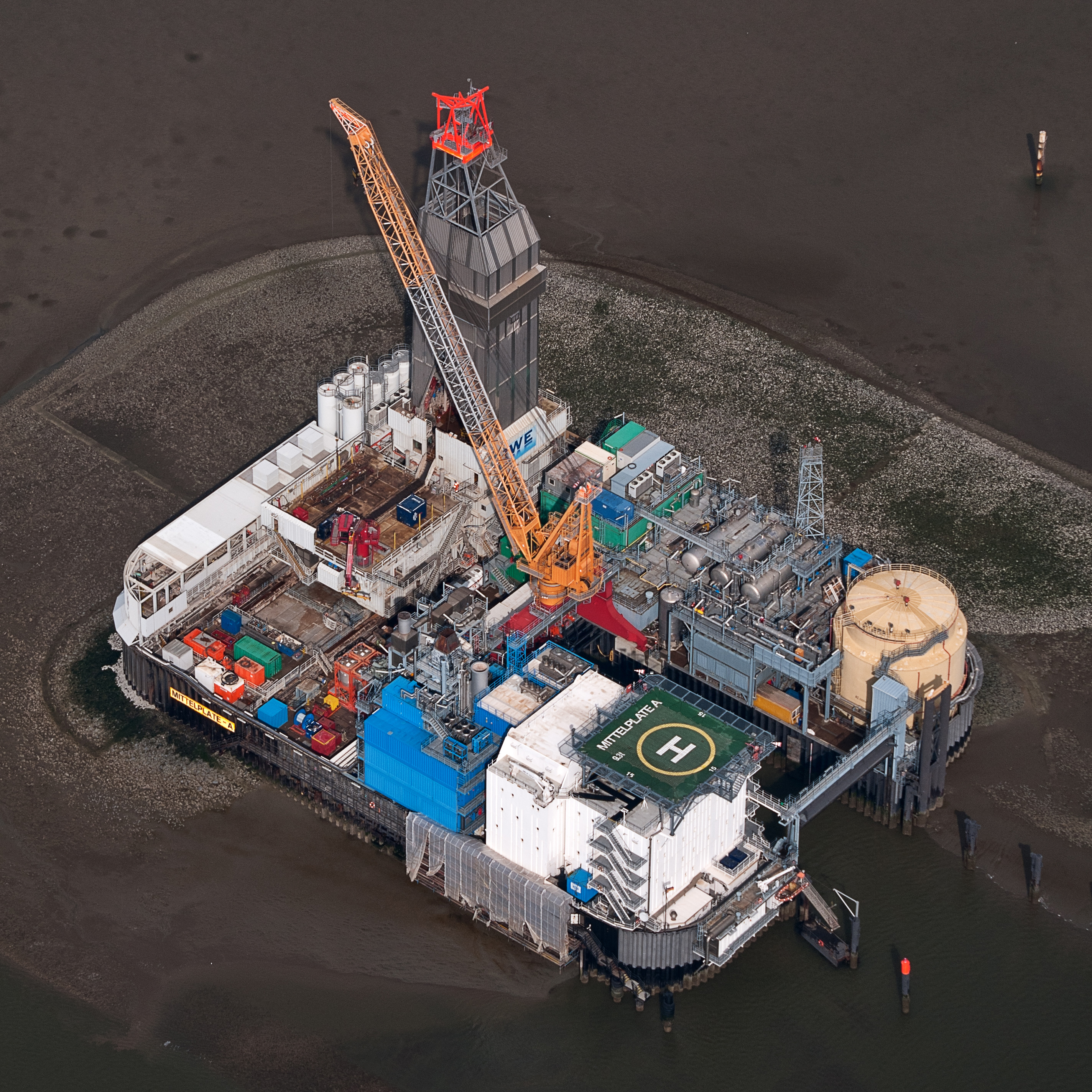 North Sea oil is a mixture of hydrocarbons, comprising liquid petroleum and natural gas, produced from petroleum reservoirs beneath the North Sea. In the petroleum industry, the term "North Sea" often includes areas such as the Norwegian Sea and the area known as "West of Shetland", "the Atlantic Frontier" or "the Atlantic Margin" that is not geographically part of the North Sea. Brent crude is still used today as a standard benchmark for pricing oil, although the contract now refers to a blend of oils from fields in the northern North Sea. On 9 March 2020, the Brent Crude price fell to $34.36, below the UK production cost of $39.20. Norway and Denmark have production costs of less than $13 per barrel.

Commercial extraction of oil on the shores of the North Sea dates back to 1851, when James Young retorted oil from torbanite (boghead coal, or oil shale) mined in the Midland Valley of Scotland. Across the sea in Germany, oil was found in the Wietze field near Hanover in 1859, leading to the discovery of seventy more fields, mostly in Lower Cretaceous and Jurassic reservoirs, producing a combined total of around 1340 m³ (8,400 barrels) per day. Gas was found by chance in a water well near Hamburg in 1910, leading to minor gas discoveries in Zechstein dolomites elsewhere in Germany. In England, BP discovered gas in similar reservoirs in the Eskdale anticline in 1938, and in 1939 they found commercial oil in Carboniferous rocks at Eakring in Nottinghamshire. Discoveries elsewhere in the East Midlands lifted production to 400 m³ (2,500 barrels) per day, and a second wave of exploration from 1953 to 1961 found the Gainsborough field and ten smaller fields. The Netherlands' first oil shows were seen in a drilling demonstration at De Mient during the 1938 World Petroleum Congress at The Hague. Subsequent exploration led to the 1943 discovery by Exploratie Nederland, part of the Royal Dutch/Shell company Bataafsche Petroleum Maatschappij, of oil under the Dutch village of Schoonebeek, near the German border. NAM found the Netherlands' first gas in Zechstein carbonates at Coevorden in 1948. 1952 saw the first exploration well in the province of Groningen, Haren-1, which was the first to penetrate the Lower Permian Rotliegendes sandstone that is the main reservoir for the gas fields of the southern North Sea, although in Haren-1 it contained only water. The Ten Boer well failed to reach target depth for technical reasons, but was completed as a minor gas producer from the Zechstein carbonates. The Slochteren-1 well found gas in the Rotliegendes in 1959, although the full extent of what became known as the Groningen gas field was not appreciated until 1963—it is currently estimated at ≈ recoverable gas reserves. Smaller discoveries to the west of Groningen followed.

The UK Continental Shelf Act came into force in May 1964. Seismic exploration and the first well followed later that year. It and a second well on the Mid North Sea High were dry, as the Rotliegendes was absent, but BP's ''Sea Gem'' rig struck gas in the West Sole Field in September 1965. The celebrations were short-lived since the ''Sea Gem'' sank, with the loss of 13 lives, after part of the rig collapsed as it was moved away from the discovery well. The Viking Gas Field was discovered in December 1965 with the Conoco/National Coal Board well 49/17-1, finding the gas-bearing Permian Rotliegend Sandstone at a depth of 2,756 m subsea. Helicopters were first used to transport workers. Larger gas finds followed in 1966—Leman Bank, Indefatigable and Hewett, but by 1968 companies had lost interest in further exploration of the British sector, a result of a ban on gas exports and low prices offered by the only buyer, British Gas. West Sole came onstream in May 1967. Licensing regulations for Dutch waters were not finalised until 1967. The situation was transformed in December 1969, when Phillips Petroleum discovered oil in Chalk of Danian age at Ekofisk, in Norwegian waters in the central North Sea. The same month, Amoco discovered the Montrose Field about east of Aberdeen. The original objective of the well had been to drill for gas to test the idea that the southern North Sea gas province extended to the north. Amoco were astonished when the well discovered oil. BP had been awarded several licences in the area in the second licensing round late in 1965, but had been reluctant to work on them. The discovery of Ekofisk prompted them to drill what turned out to be a dry hole in May 1970, followed by the discovery of the giant Forties Oil Field in October 1970. The following year, Shell Expro discovered the giant Brent oilfield in the northern North Sea east of Shetland in Scotland and the Petronord Group discovered the Frigg gas field. The Piper oilfield was discovered in 1973 and the Statfjord Field and the Ninian Field in 1974, with the Ninian reservoir consisting of Middle Jurassic sandstones at a depth of 3000 m subsea in a "westward tilted horst block". Offshore production, like that of the North Sea, became more economical after the 1973 oil crisis caused the world oil price to quadruple, followed by the 1979 oil crisis, causing another tripling in the oil price. Oil production started from the Argyll & Duncan Oilfields (now the Ardmore) in June 1975 followed by Forties Oil Field in November of that year. The inner Moray Firth Beatrice Field, a Jurassic sandstone/shale reservoir 1829 m deep in a "fault-bounded anticlinal trap", was discovered in 1976 with well 11/30-1, drilled by the Mesa Petroleum Group (named after T. Boone Pickens' wife Bea, "the only oil field in the North Sea named for a woman") in 49 m of water.

Volatile weather conditions in Europe's North Sea have made drilling particularly hazardous, claiming many lives (see Oil platform). The conditions also make extraction a costly process; by the 1980s, costs for developing new methods and technologies to make the process both efficient and safe, far exceeded NASA's budget to land a man on the moon. The exploration of the North Sea has been a story of continually pushing the edges of the technology of exploitation (in terms of what can be produced) and later the technologies of discovery and evaluation (2-D seismic, followed by 3-D and 4-D seismic; sub-salt seismic; immersive display and analysis suites and supercomputing to handle the flood of computation required). The Gullfaks oil field was discovered in 1978. The Snorre Field was discovered in 1979, producing from the Triassic Lunde Formation and the Triassic-Jurassic Statfjord Formation, both fluvial sandstones in a mudstone matrix. The Oseberg oil field and Troll gas field were also discovered in 1979. The Miller oilfield was discovered in 1983. The Alba Field produces from sandstones in the middle Eocene Alba Formation at 1860 m subsea and was discovered in 1984 in UKCS Block 16/26. The Smørbukk Field was discovered in 1984 in 250–300 m of water that produces from Lower to Middle Jurassic sandstone formations within a fault block. The Snøhvit Gas Field and the Draugen oil field were discovered in 1984. The Heidrun oil field was discovered in 1985. The largest UK field discovered in the past twenty-five years is Buzzard, also located off Scotland, found in June 2001 with producible reserves of almost 64×106 m³ (400m bbl) and an average output of 28,600 m3 to 30,200 m3 (180,000–220,000 bbl) per day. The largest field found in the past five years on the Norwegian part of the North Sea, is the Johan Sverdrup oil field which was discovered in 2010, with further oil of the same field was discovered the next year. Total reserves of the field are estimated at 1.7 to 3.3 billion barrels of gross recoverable oil and Johan Sverdrup is expected to produce 120,000 to 200,000 barrels of oil per day. Production started 5 October 2019. It is one of the largest discoveries made in the Norwegian Continental Shelf. , the North Sea was the world's most active offshore drilling region with 173 active rigs drilling.