is the capital and the most populous city of Niigata Prefecture located in the Chūbu region of Japan. It is the largest city on the west coast of Honshu, and the second largest city in Chūbu region after Nagoya. It faces the Sea of Japan and Sado Island. , the city had an estimated population of 797,591, and a population density of 1,098 persons per km2. The total area is . Greater Niigata, the Niigata Metropolitan Employment Area, has a GDP of US$43.3 billion as of 2010. With a long history as a port town, Niigata became a free port following the Meiji Restoration. Niigata's city government was established in 1889. Mergers with nearby municipalities in 2005 allowed the city's population to jump to 810,000. The annexation of the surrounding area has also given the city the greatest rice paddy field acreage in Japan. On April 1, 2007, it became the first government-designated city on the Japan Sea coast of Honshu.

The place name "Niigata" was first recorded in 1520 (Eisho 17). Its name in kanji can be translated as "new", "lagoon", "city". However, as there is no record about the origin of the name, this had led to several theories. First "Niigata" was a large lagoon at the mouth of the Shinano river. Second it was an inland bay at the river's entrance. Third it was the name of a village that stood on an island within the estuary. Fourth it referred to another island settlement that relocated to the Furumachi district and that in turn gave its name to a nearby lagoon.

People have inhabited the Niigata area since the Jōmon period, though much of the current land was still beneath the sea at the time. According to the Nihon Shoki, a fortress was built in the area in AD 647.

A system of canals was constructed on the main island of Niigata in the 17th century. During this period, the courses of the Shinano and Agano rivers gradually changed until they poured into the Sea of Japan at the same location. As a result, Niigata prospered as a port town, serving as a port of call for Japanese trade ships traversing the Sea of Japan. The Matsugasaki Canal was constructed in 1730 to drain the Agano River area, but in 1731, flooding destroyed the canal and caused it to become the main current of the Agano River. As a result, the volume of water flowing into the port of Niigata decreased, which in turn allowed land reclamation efforts and the development of new rice fields to proceed.

In 1858, Niigata was designated as one of the five ports to be opened for international trade in the Japan–U.S. Treaty of Amity and Commerce. However, the shallow water level in the port delayed the actual opening to foreign ships until 1869. The port also served as a valuable base for fishermen who roamed as far north as the Kamchatka Peninsula to catch salmon and other fish. In 1886, the first Bandai Bridge was built across the Shinano River to connect the settlements of Niigata on the east and Nuttari on the west. Niigata annexed Nuttari in 1914. During World War II, Niigata's strategic location between the capital of Tokyo and the Sea of Japan made it a key point for the transfer of settlers and military personnel to the Asian continent, including Manchukuo.

In 1945, near the end of the war, Niigata was one of four cities, together with Hiroshima, Kokura, and Nagasaki, picked as targets for the atomic bomb if Japan did not surrender. The governor of Niigata Prefecture ordered the people to evacuate as rumors of an impending bombing spread, and the city was completely deserted for days. Poor weather conditions and its distance from B-29 bases in the Mariana Islands meant that it was removed from the list of targets during deliberations; Nagasaki was bombed instead. In 1950, construction of Niigata Station was completed, extending the downtown area from Bandai Bridge. A devastating fire in 1955 destroyed much of the downtown area, but eventually the city recovered. The Niigata Thermal Power Station Unit 1 started operation in July 1963. At that time, it was Japan's first power plant capable of using a mixture of natural gas and heavy oil. In 1964, the old canals that flowed throughout the city were filled in to make way for more roads. On June 16, 1964, at 13:23 Japan Standard Time an earthquake of 7.5 Richter scale struck the city, killing 29 people and causing large-scale property damage, with 1,960 totally destroyed buildings, 6,640 partially destroyed buildings, and 15,298 severely inundated by liquefaction. In 1965, the Agano River running through Niigata was polluted with methylmercury from the chemical plant of the Showa Electrical Company. Over 690 people exhibited symptoms of Minamata disease and the outbreak became known as Niigata Minamata disease. In 1982, Shinkansen service on the Jōetsu Shinkansen line began between Niigata and Omiya, with service to Ueno added in 1985. The line was extended to Tokyo in 1991. Big Swan Stadium in Niigata City hosted three games during the 2002 FIFA World Cup. The 2004 Chūetsu earthquake did not cause any significant damage in Niigata City itself, allowing the city to work as a relief base. The size and the population of Niigata city increased over the four-year period between 2001 and 2005, due to a series of municipal mergers. On April 1, 2007, Niigata City became first city on the west coast of Honshu to become a government-designated city. In July 2007, the Chūetsu offshore earthquake, measuring 6.9 on Richter scale, rocked Niigata Prefecture. Though the earthquake was felt in the city, there was little damage, which allowed Niigata City to provide aid to the devastated areas. In May 2008, the city hosted the 2008 G8 Labor Ministers Meeting. On March 12, 2011, several hours after the massive 9.0 Tohoku earthquake struck off the east coast of Honshu, Niigata and Nagano Prefectures experienced an estimated magnitude 6.6 earthquake.

Niigata is situated on a fertile coastal plain on the Sea of Japan coast, facing Sado Island. The Shinano River and Agano River flow through the city. Numerous wetlands, such as the Fukushimagata wetlands, can be found within the city limits. The Sakata lagoon is registered as a wetland of international importance under the Ramsar Convention. Niigata City's low elevation and abundant water have made flood control and land reclamation important issues for the area throughout its history. The city is sometimes called the because of the two rivers that flow through it, its position next to the Japan Sea, its many wetlands, and the canals that used to run through the city. It is also sometimes referred to as the or because of the willow trees that lined the old canals. In recent years, the city has been promoting itself as a , highlighting its agricultural areas outside of the city center.

Niigata City features a humid subtropical climate (Cfa), but receives more yearly snowfall than cities such as Moscow, Montreal or Oslo. The climate in Niigata City is characterized by its high humidity and strong winds from the Sea of Japan. While many other parts of Niigata Prefecture tend to have heavy snow, Niigata City itself usually receives less due to its low-lying elevation and the shielding effect of Sado Island. However, Niigata City does receive much precipitation, mostly in the form of rainfall. On average, Niigata City has 269 days of precipitation each year, about 170 days of which see rain or snowfall measuring over 1 mm. The rainy season in July brings large amounts of rain, while the winter months, especially November and December, also have much precipitation. In summer, the south wind makes the weather rather hot. Typhoons usually bring strong foehn winds to this area, generally causing somewhat higher temperatures than in other parts of Japan. The weather on the west coast of Honshu tends to be better during the summer months than on the Pacific coast. 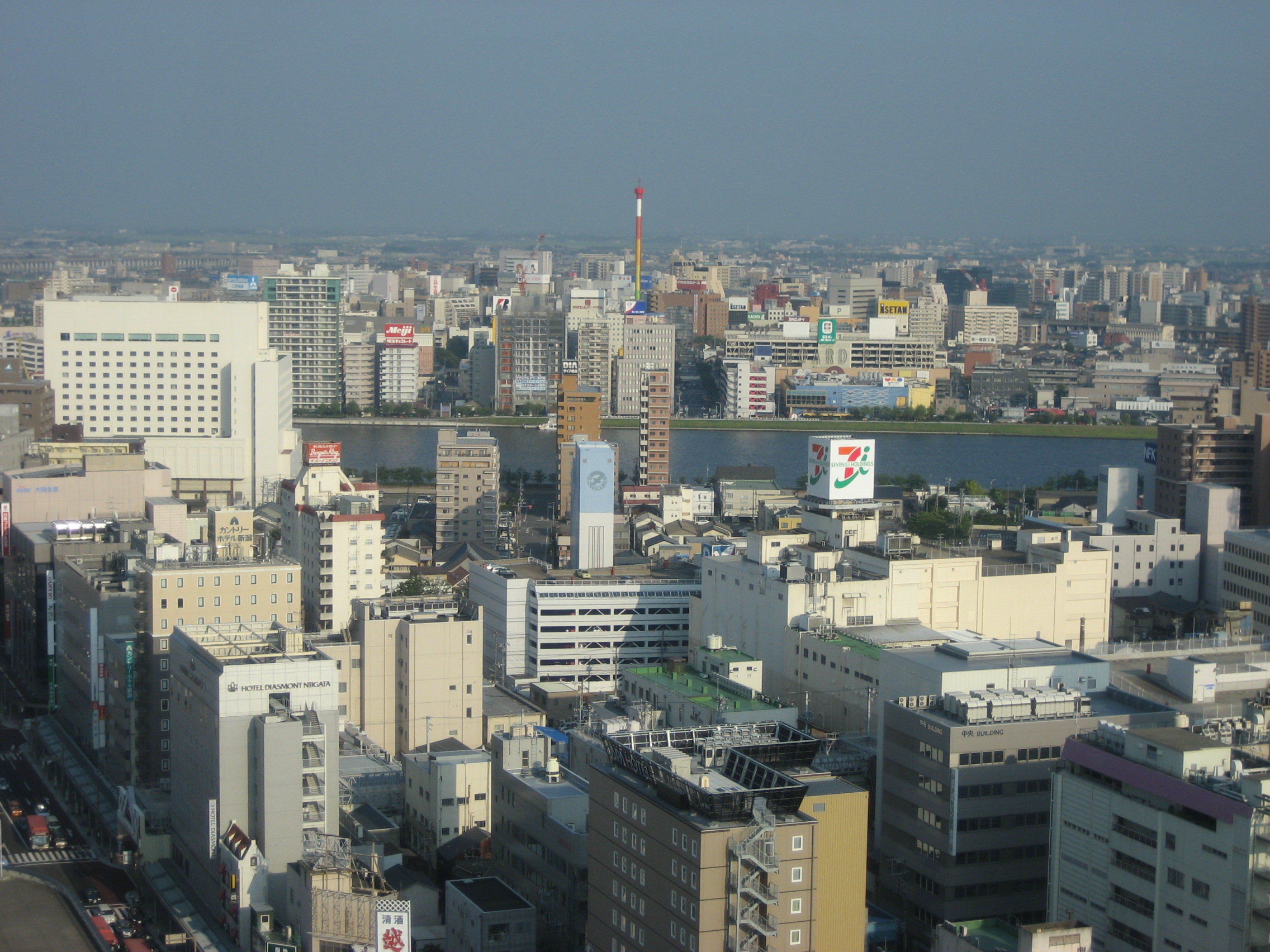 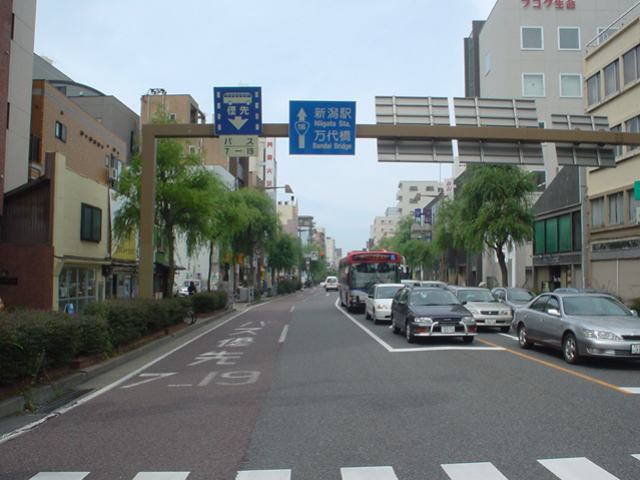 Niigata was formerly the terminus of the Mangyongbong-92 ferry, one of the direct connections between Japan and North Korea.