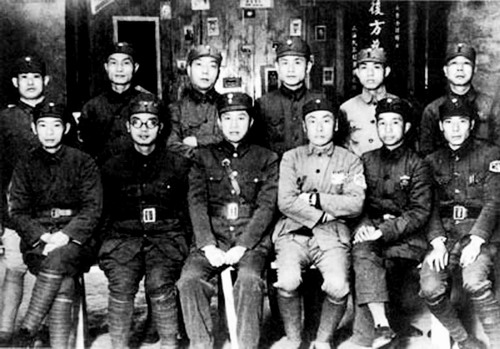 The New Fourth Army () was a unit of the National Revolutionary Army of the Republic of China established in 1937. In contrast to most of the National Revolutionary Army, it was controlled by the Communist Party of China and not by the ruling Kuomintang. The New Fourth Army and the Eighth Route Army were the two main communist forces from 1938. The New Fourth Army was active south of the Yangtze River (Chang Jiang), while the Eighth Route Army was based in Yan'an in the northwest. Members of the New Fourth Army wore their badges on the left arm, with ''"N4A"'' and the soldier's unit and name listed on the badge. After the Xi'an Incident, the Kuomintang led by Chiang Kai-shek and the Communist Party of China led by Mao Zedong formed a United Front against Japan, which was already in control of Manchuria and pushing into North China. The Marco Polo Bridge Incident in July 1937 marked the beginning of the Sino-Japanese War (1937-1945). In October, 1937, an announcement was made that Red Army soldiers active in the eight provinces in southern China — those who did not embark on the Long March would be part of the New Fourth Army. The New Fourth Army was established on December 25, 1937 in Hankou, moving to Nanchang on January 6, 1938, when the detachments began marching to the battlefront. At the beginning, the New Fourth Army had four detachments and one task force battalion and numbered roughly ten thousand. Later the army moved to Anhui province. Ye Ting was the army commander, Xiang Ying the deputy army commander. It was in theory a united front against Japan but in practice there was friction between Nationalist and Communist Forces, which intensified in the fall of 1940, culminating in the New Fourth Army Incident with a full-fledged battle between the New Fourth Army and KMT National Revolutionary Army forces. Up until that point, most of the battles had been skirmishes. The army was fully reorganised after the incident and remained in active combat until the end of the war.

In 1938 the 1st, 2nd and 3rd detachments began marching to the battlefront in southern Anhui and southern Jiangsu. The 4th detachment got northern and middle Anhui . Because they were in the back of the Japanese army, the New Fourth Army didn't annihilate too much Japanese troops at first. In most of the time they were establishing base areas and recruiting new recruits. After the Japanese had occupied Wuhan, the New Fourth Army took the opportunity to set up several guerrilla camps in this area.

In summer 1946, Chinese Civil War had broke out. The Nationalist forces attacked the 5th Division first and occupy its base area successfully. But in middle Jiangsu Su Yu's 1st Division miraculously won by fewer and wiped out 56,000 soldiers of the Nationalist forces. Because of the lack of troops, the 1st Division, 2nd Division, 4th Division and 7th Division had to withdraw to Shandong in winter 1946. In January 1947, the New Fourth Army and Shandong Military Region of People's Liberation Army were merged into East China Field Army.

The New Fourth Army Headquarters () was located at No. 332-352, Shengli Street, Jiang'an District, Wuhan. The site was renovated by the Wuhan People's Government in 2005. On March 5, 2013, it was named a Major National Historical and Cultural Sites.

Most of New Fourth Army's military officers were the guerrillas of Chinese Red Army, the others were from 8th Route Army . The experience in China's Civil War made them rapidly expand their forces in the beginning of the Second Sino-Japanese War . During the eight years of the war the officers with excellent abilities were usually promoted faster . For example, general Zhang Aiping was only a battalion commander of Chinese Red Army in 1934 . However he had been a division commander of New Fourth Army in 1945 .

With the rapid expansion of the size of the army, a large number of junior officers and newly recruited students need training. Because of the lack of teachers, the Eighth Route Army dispatched hundreds of military instructors to the New Fourth Army twice. From 1940 to 1942, the New Fourth Army had built established six military training schools in the battlefield . These military training schools were collectively referred to as branches of the Anti-Japanese Military and Political University .

In the first three years, New Fourth Army operated independently with the regiment as its basic unit . After the New Fourth Army Incident , the army was reorganized into seven divisions and nineteen brigades ..