Nepal (; ne|नेपाल ), officially the Federal Democratic Republic of Nepal, is a sovereign country in South Asia. It is mainly in the Himalayas, but also includes parts of the Indo-Gangetic Plain. It is the 49th largest country by population and 93rd largest country by area. It is landlocked and borders Tibet in the north and India in the south, east and west, while Bangladesh is located only 27 km (17 mi) from its southeastern tip and Bhutan is separated from it by the Indian state of Sikkim. Nepal has a diverse geography, including fertile plains, subalpine forested hills, and eight of the world's ten tallest mountains, including Mount Everest, the highest point on Earth. Kathmandu is the capital and the largest city. Nepal is a multiethnic country, with Nepali as the official language. The name "Nepal" is first recorded in texts from the Vedic period of the Indian subcontinent, the era in ancient Nepal when Hinduism was founded, the predominant religion of the country. In the middle of the first millennium BC, Gautama Buddha, the founder of Buddhism, was born in Lumbini in southern Nepal. Parts of northern Nepal were intertwined with the culture of Tibet. The centrally located Kathmandu Valley is intertwined with the culture of Indo-Aryans, and was the seat of the prosperous Newar confederacy known as Nepal Mandala. The Himalayan branch of the ancient Silk Road was dominated by the valley's traders. The cosmopolitan region developed distinct traditional art and architecture. By the 18th century, the Gorkha Kingdom achieved the unification of Nepal. The Shah dynasty established the Kingdom of Nepal and later formed an alliance with the British Empire, under its Rana dynasty of premiers. The country was never colonized but served as a buffer state between Imperial China and British India. Parliamentary democracy was introduced in 1951 but was twice suspended by Nepalese monarchs, in 1960 and 2005. The Nepalese Civil War in the 1990s and early 2000s resulted in the establishment of a secular republic in 2008, ending the world's last Hindu monarchy. The Constitution of Nepal, adopted in 2015, affirms Nepal as a secular federal parliamentary republic divided into seven provinces. It remains the only multi-party, fully democratic nation in the world currently ruled by a communist party. Nepal was admitted to the United Nations in 1955, and friendship treaties were signed with India in 1950 and the People's Republic of China in 1960. Nepal hosts the permanent secretariat of the South Asian Association for Regional Cooperation (SAARC), of which it is a founding member. Nepal is also a member of the Non-Aligned Movement and the Bay of Bengal Initiative. The military of Nepal is the fifth largest in South Asia; it is notable for its Gurkha history, particularly during the world wars, and has been a significant contributor to United Nations peacekeeping operations.

Before the unification of Nepal, the Kathmandu Valley was known as ''Nepal''. The precise origin of the term ''Nepāl'' is uncertain. ''Nepal'' appears in ancient Indian literary texts dated as far back as the fourth century BC. However, an absolute chronology can not be established, as even the oldest texts may contain anonymous contributions dating as late as the early modern period. Academic attempts to provide a plausible theory are hindered by the lack of a complete picture of history and insufficient understanding of linguistics or relevant Indo-European and Tibeto-Burman languages. According to Hindu mythology, Nepal derives its name from an ancient Hindu sage called ''Ne'', referred to variously as ''Ne Muni'' or ''Nemi''. According to ''Pashupati Purāna'', as a place protected by ''Ne'', the country in the heart of the Himalayas came to be known as ''Nepāl''. According to ''Nepāl Mahātmya'', ''Nemi'' was charged with protection of the country by Pashupati. According to Buddhist mythology, Manjushri Bodhisattva drained a primordial lake of serpents to create the Nepal valley and proclaimed that ''Adi-Buddha'' ''Ne'' would take care of the community that would settle it. As the cherished of ''Ne'', the valley would be called ''Nepāl''. According to ''Gopalarājvamshāvali'', the genealogy of ancient Gopala dynasty compiled circa 1380s, Nepal is named after ''Nepa'' the cowherd, the founder of the Nepali scion of the Abhiras. In this account, the cow that issued milk to the spot, at which ''Nepa'' discovered the ''Jyotirlinga'' of ''Pashupatināth'' upon investigation, was also named ''Ne''.

In the late 1940s, newly emerging pro-democracy movements and political parties in Nepal were critical of the Rana autocracy. Following the success of Indian Independence Movement which Nepalese activists had taken part in, with India's support and cooperation of King Tribhuvan, Nepali Congress was successful in toppling the Rana regime, establishing a parliamentary democracy. After a decade of power wrangling between the king and the government, King Mahendra (ruled 1955–1972) scrapped the democratic experiment in 1960, and a "partyless" Panchayat system was created to govern Nepal. The political parties were banned and politicians imprisoned or exiled.

The Panchayat rule modernised the country, introducing reforms and developing infrastructure, but curtailed liberties and imposed heavy censorship. In 1990, the People's Movement forced King Birendra (ruled 1972–2001) to accept constitutional reforms and to establish a multiparty democracy. In 1996, the Maoist Party started a violent bid to replace the royal parliamentary system with a people's republic. This led to the long Nepali Civil War and more than 16,000 deaths. With the death of both the King and the Crown Prince in a massacre in the royal palace, King Birendra's brother Gyanendra inherited the throne in 2001 and subsequently assumed full executive powers aiming to quash the Maoist insurgency himself.

The Maoist Party joined mainstream politics following the success of the peaceful democratic revolution of 2006; Nepal became a secular state, and on 28 May 2008, it was declared a republic, ending its time-honoured status as the world's only Hindu Kingdom. The country's new designation as the Federal Democratic Republic of Nepal was submitted to the United Nations on 4 August 2008, and later confirmed by the constitution. After a decade of instability and internal strife which saw two constituent assembly elections, the new constitution was promulgated on 20 September 2015, making Nepal a federal democratic republic divided into seven provinces. In June 2017, Nepali Congress leader Sher Bahadur Deuba was elected the 40th Prime Minister of Nepal, succeding Prime Minister and Chairman of CPN (Maoist Centre) Pushpa Kamal Dahal. Deuba had been previously Prime Minister from 1995 to 1997, from 2001 to 2002, and from 2004 to 2005. In November 2017, Nepal had first general election since the civil war ended and the monarchy was abolished. The main alternatives were centrist Nepali Congress Party and the alliance of former Maoist rebels and the Communist UML party. The alliance of communists won the election, and UML leader Khadga Prasad Sharma Oli was sworn in February 2018 as the new Prime Minister. He had previously been Prime Minister since 2015 until 2016. 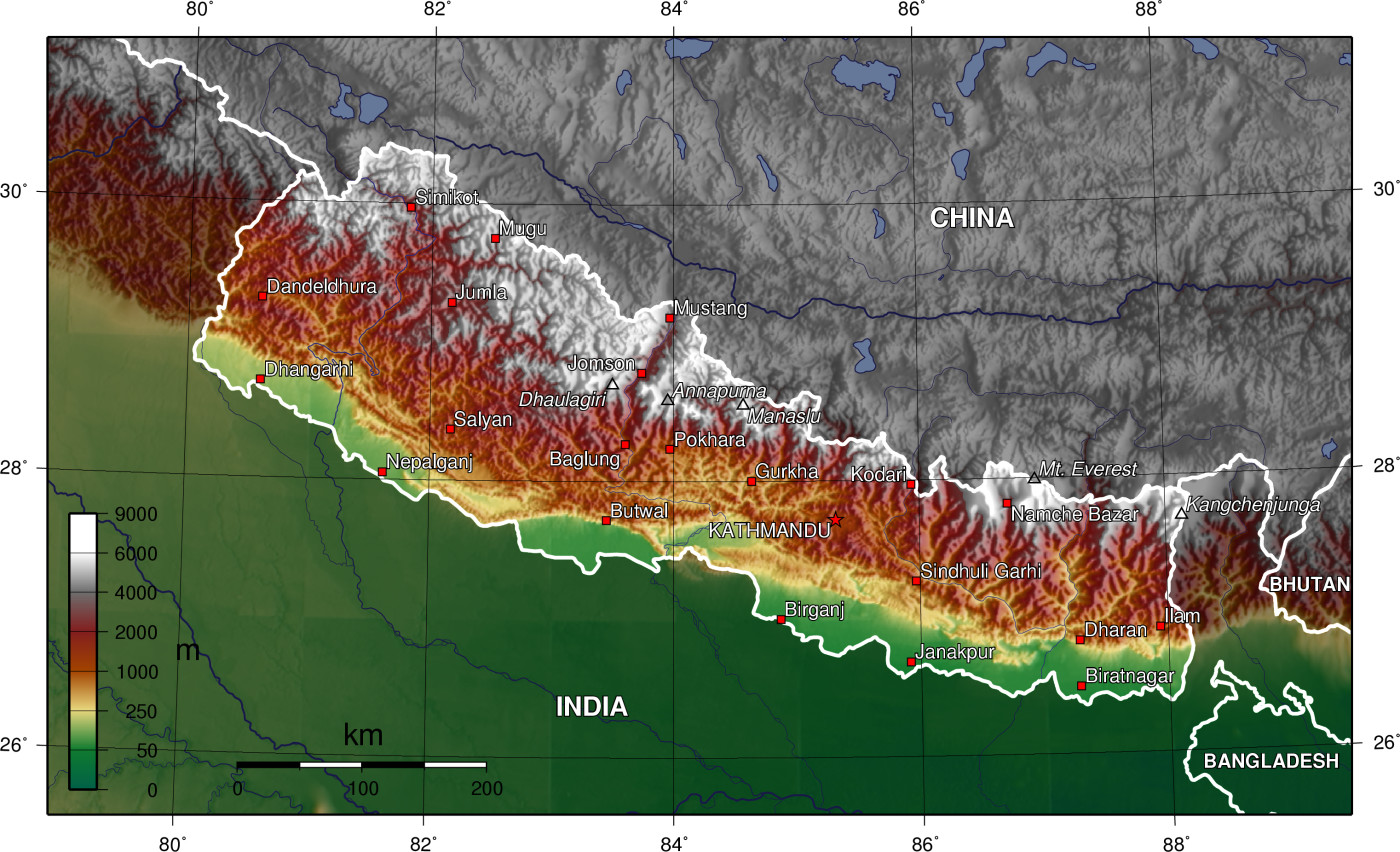 Nepal is of roughly trapezoidal shape, about long and wide, with an area of . It lies between latitudes 26° and 31°N, and longitudes 80° and 89°E. Nepal's defining geological processes began 75 million years ago when the Indian plate, then part of the southern supercontinent Gondwana, began a north-eastward drift caused by seafloor spreading to its south-west, and later, south and south-east. Simultaneously, the vast Tethyn oceanic crust, to its northeast, began to subduct under the Eurasian plate.