The National Library at Kolkata
romanisation Romanization or romanisation, in linguistics Linguistics is the science, scientific study of language. It encompasses the analysis of every aspect of language, as well as the methods for studying and modeling them. The traditional areas ...
is a widely used
transliteration Transliteration is a type of conversion of a text from one script to another that involves swapping Letter (alphabet), letters (thus ''wikt:trans-#Prefix, trans-'' + ''wikt:littera#Latin, liter-'') in predictable ways, such as Greek → , Cyr ...
scheme in dictionaries and grammars of Indic languages. This transliteration scheme is also known as ''(American)
Library of Congress The Library of Congress (LC) is the research library that officially serves the United States Congress and is the '' de facto'' national library of the United States. It is the oldest federal cultural institution in the United States. The l ...
'' and is nearly identical to one of the possible
ISO 15919 ISO 15919 "Transliteration of Devanagari and related Indic scripts into Latin characters" is one of a series of international standards for romanization Romanization or romanisation, in linguistics, is the conversion of writing from a differen ...
variants. The scheme is an extension of the
IAST The International Alphabet of Sanskrit Transliteration (IAST) is a transliteration scheme that allows the lossless romanisation of Brahmic family, Indic scripts as employed by Sanskrit and related Indic languages. It is based on a scheme that ...
scheme that is used for transliteration of
Sanskrit Sanskrit (, attributively , ''saṃskṛta-'', nominalization, nominally , ''saṃskṛtam'') is a classical language of South Asia belonging to the Indo-Aryan languages, Indo-Aryan branch of the Indo-European languages. It arose in South Asia ...
.

The tables below mostly use
Devanagari Devanagari ( ; , , Sanskrit pronunciation: ), also called Nagari (''Nāgarī'', ),Kathleen Kuiper (2010), The Culture of India, New York: The Rosen Publishing Group, , page 83 is a left-to-right abugida . ''May Śiva protect those who take ...
but they also include letters from
Kannada } Kannada (; ಕನ್ನಡ, ; less commonly known as Kanarese) is a Dravidian language spoken predominantly by the people of Karnataka in the southwestern region of India. The language is also spoken by linguistic minorities in the states ...
(),
Tamil

Computer input by selection from a screen 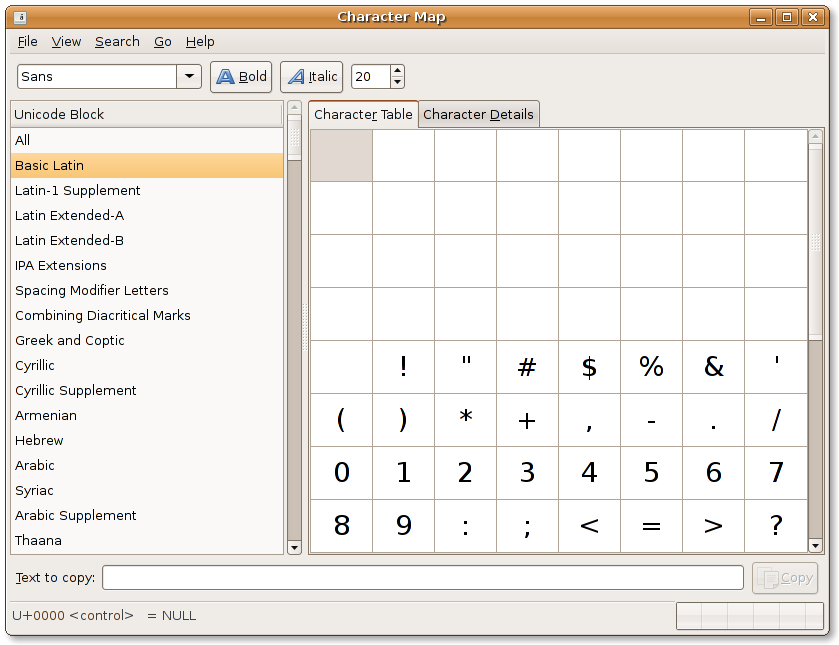 Many systems provide a way to select Unicode characters visually. ISO/IEC 14755 refers to this as a ''screen-selection entry method''.
Microsoft Windows Microsoft Windows, commonly referred to as Windows, is a group of several Proprietary software, proprietary graphical user interface, graphical operating system families, all of which are developed and marketed by Microsoft. Each family caters ...
has provided a
Unicode Unicode is an information technology Technical standard, standard for the consistent character encoding, encoding, representation, and handling of Character (computing), text expressed in most of the world's writing systems. The standard is mai ...
version of the Character Map program (find it by hitting then type charmap then hit ) since version NT 4.0 – appearing in the consumer edition since XP. This is limited to characters in the Basic Multilingual Plane (BMP). Characters are searchable by Unicode character name, and the table can be limited to a particular code block. More advanced third-party tools of the same type are also available (a notable
freeware Freeware is software, most often proprietary software, proprietary, that is distributed at no monetary cost to the end user. There is no agreed-upon set of rights, Software license, license, or EULA that defines ''freeware'' unambiguously; every p ...
example is BabelMap).
macOS macOS (; previously Mac OS X and later OS X) is a Proprietary software, proprietary graphical user interface, graphical operating system developed and marketed by Apple Inc. since 2001. It is the primary operating system for A ...
provides a "character palette" with much the same functionality, along with searching by related characters, glyph tables in a font, etc. It can b
enabled
in the input menu in the menu bar under System Preferences → International → Input Menu (or System Preferences → Language and Text → Input Sources) or can be viewed under Edit → Emoji & Symbols in many programs. Equivalent tools – such as gucharmap (GNOME) or List of KDE applications, kcharselect (KDE) – exist on most Linux desktop environments.

Only certain fonts support all Latin
Unicode Unicode is an information technology Technical standard, standard for the consistent character encoding, encoding, representation, and handling of Character (computing), text expressed in most of the world's writing systems. The standard is mai ...
characters for the transliteration of Indic scripts according to the
ISO 15919 ISO 15919 "Transliteration of Devanagari and related Indic scripts into Latin characters" is one of a series of international standards for romanization Romanization or romanisation, in linguistics, is the conversion of writing from a differen ...
standard. For example, Tahoma (typeface), Tahoma supports almost all the characters needed. Arial and Times New Roman font packages that come with Microsoft Office 2007 and later also support most Latin Extended Additional characters like ḍ, ḥ, ḷ, ḻ, ṁ, ṅ, ṇ, ṛ, ṣ and ṭ. The open-source fonts Libertinus Serif and Libertinus Sans (forked from the Linux Libertine project) also have full support.