National Express is an intercity and Inter-regional coach operator providing services throughout Great Britain. It is a subsidiary of National Express. Most services are subcontracted to local coach companies. The company's head office is in offices above Birmingham Coach Station.

Pursuant to the Transport Act 1968, the National Bus Company was formed as a holding company for the many state-owned local bus companies. Many of these bus companies also operated coach services and these were initially branded as ''National''. The ''National Express'' brand was first used in 1974 although the coach services continued to be operated by the individual companies. Coach services were deregulated under the Transport Act 1980, and buses by the Transport Act 1985. In March 1988 National Express was privatised in a management buyout. In July 1989 the company bought ATL Holdings (with operations in Sheffield) and a 50% share in Yelloway Trathen, which was renamed Trathens Travel Services. In August 1989 the Eurolines services from London to Alicante, Barcelona and Paris were purchased from Wallace Arnold, and the express services (with 29 coaches) in Scotland and to London from Stagecoach. These were operated under the Caledonian Express brand. In June 1991 National Express was sold to the Drawlane Group. In December 1992 National Express Group plc was floated on the London Stock Exchange. In its early years National Express had little competition in the long-distance coach market. A number of operators attempted to compete with the company after deregulation in 1980, the largest being the British Coachways consortium, but most had ceased to compete by the end of the decade. However, in 2003, Stagecoach introduced Megabus, a no-frills service whose £1 fares sparked a price war with National Express in autumn 2004. The competition intensified in 2007 when Megabus transferred its London terminus from the Green Line Coach Station into the main Victoria Coach Station. In November 2007 National Express announced plans to re-brand all its operations under a new unified National Express identity. As part of this the coach operation received a slightly different livery, retaining the red, white and blue theme, but with a new lower-case logo. Coaches started appearing in the new livery from December 2007.

A national network links more than 540 locations, including 59 of the UK mainland's 64 cities, with 1,800 plus services operating every day, increasing to over 1,900 on Fridays. Over 1,000 airport services a day run direct to the terminal for all major UK airports. 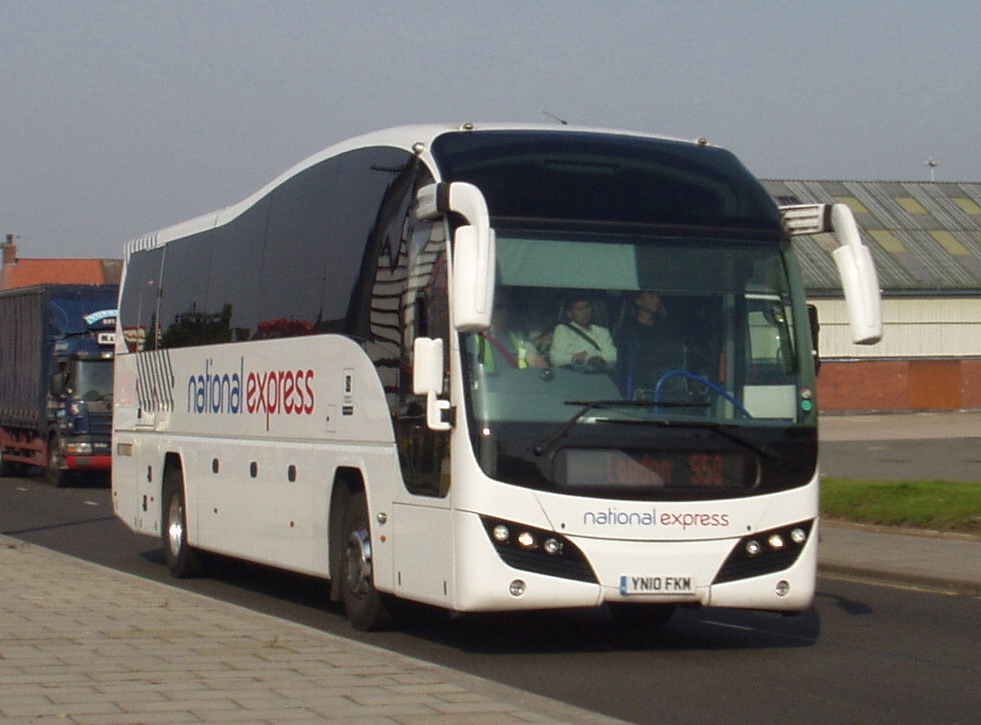 National Express offers many routes to destinations across the country. In addition, shuttle and airport services are also operated, although there is no obvious difference to the passenger between a standard, shuttle or airport service with regard to branding. Many National Express coach routes pass through several town centres, which increases journey times for longer journeys considerably. A smaller number of shuttle services operate at least once an hour over faster direct routes. National Express operates coach services direct to the terminal for all major UK airports, 24 hours a day, with 1,100 airport services every day, including East Midlands, Gatwick, Heathrow, Luton and Stansted. The ''Airport'' brand was created in 2003 when the National Express image brand was updated, merging the former Airlink, Flightlink, Jetlink and Speedlink brands. In the 2007 re-brand, the ''Airport'' branding was dropped, although the 'Airport' coding is still used on tickets.


Effects of the COVID-19 pandemic

All services were suspended from 6 April 2020, after passenger numbers were greatly reduced by travel restrictions imposed during the coronavirus pandemic. Services restarted nearly three months later on 1 July, on about a quarter of route mileage and with reduced frequencies, but were again suspended from 11 January 2021. Eleven weeks later, limited services again resumed on 29 March.

99% of the National Express fleet are fitted with wheelchair lifts. Wheelchair users are not required to book in advance but a dedicated Assisted Travel Team are available to help with booking and can advise on wheelchair compatibility and accessible stops. National Express coaches are modern and comfortable with reclining leather seats, air conditioning, free entertainment via VUER (a complimentary onboard entertainment app offering films, TV and magazines), free WiFi, power sockets and toilets.

National Express tickets are available through a variety of methods, including on-line and telephone booking, and varied pricing structures. Traditionally, tickets are sold through National Express ticket offices at coach stations, or by third-party agents at bus stations and travel agents. These sell tickets generally at the 'Standard Fare' or the 'Advance Fare' when booking in advance. A similar ticketing structure applies with the telephone booking service. Since 2013, tickets have also been available for purchase from the Post Office. With the introduction of competition from Megabus, more competitive internet-only ''Funfares'' were introduced. These often have stricter conditions imposed, such as being non-refundable, and are restricted to certain corridors. Other ticket types include 'Season Tickets' and 'Multi-rides', aimed at frequent travellers, although in many cases FunFares are cheaper; and BritXplorer, which allows foreign tourists unlimited travel for a specified period.

National Express and its franchisees operate a number of vehicle types. The primary coach type on the network is the Caetano Levante, which may have 2 or 3 axles. This has been the main vehicle of choice since 2006. The most recent Levante III was introduced onto the network in July 2018. Other branded vehicles used on the network include (in order of quantity): *Plaxton Elite (2 and 3 axle versions) *Caetano Boa Vista (double decker) Having withdrawn all its double deck coaches after an accident in January 2007, in October 2016 National Express placed six Caetano bodied Scania K410s into service.

In the mid-1980s during the ''Rapide'' era, an on-board tea service and on-board televisions were in operation. These were given extensive advertising campaigns as shown on the BBC Three documentary ''History of the Coach''. In April 2001 National Express phased out its on-board catering service, having already phased out its on-board television service in the 1990s. However, in late 2004 National Express launched ''NXTV'' or ''National Xpress Television''. Rather than showing a whole film as on an aircraft, ''NXTV'' would instead show various episodes of British television series such as ''A Touch of Frost'', ''My Family'' and ''Top Gear'', all of which were commissioned by ITV and the BBC. The service was displayed on small monitors situated above the overhead luggage compartments, powered by a motor to move downwards and upwards while the programming would be played from a DVD drive at the driver's dashboard. The service was phased out in the summer of 2006, due to a lack of interest in purchasing headphones, available at vending machines in the major stations and also via on-board vendors before a journey. The reason for the service's failure was that the headphone jack was compatible with any headphone, removing any reason to buy those offered. Also, by the time ''NXTV'' was launched, the Apple iPod was already at its height of popularity, diverting interest away from it. Programming was also very limited, with many of the episodes being frequent repeats from terrestrial television. The headphones were later given away free when the service was about to be ceased. The advertising slogan was "Television shows as you board the coach". National Express Coaches now offers free WiFi on most coaches. Passengers can connect to a digital entertainment service, VUER, and watch hours of films and TV for free.

Since National Express started operating, incidents include: * 26 July 1974: Three killed and over 30 injured when a double-decker overturned on the M1 near Luton after swerving to avoid an earlier collision. * 17 August 1983: Three killed on the M4 motorway near Swindon when a lorry careered into the side of a coach. * 3 August 1985: One killed and 40 injured when a double-decker overturned on the A1 in County Durham after swerving to avoid a sheep on the carriageway. * In 2007, two coaches were involved in separate fatal accidents, in January and September. * On 4 September 2009 at Gatwick Airport, a car collided with and ended up underneath a National Express coach. The single occupant of the car was killed instantly. The coach driver was taken to hospital and treated for shock. One coach passenger suffered a minor injury. * On 17 April 2018 a coach travelling from Manchester to Birmingham was involved in a crash on the M6 motorway near Crewe; two people on board were injured and taken to hospital.