The nanocar is a molecule designed in 2005 at Rice University by a group headed by Professor James Tour. Despite the name, the original nanocar does not contain a molecular motor, hence, it is not really a car. Rather, it was designed to answer the question of how fullerenes move about on metal surfaces; specifically, whether they roll or slide (they roll). The molecule consists of an H-shaped 'chassis' with fullerene groups attached at the four corners to act as wheels. When dispersed on a gold surface, the molecules attach themselves to the surface via their fullerene groups and are detected via scanning tunneling microscopy. One can deduce their orientation as the frame length is a little shorter than its width. Upon heating the surface to 200 °C the molecules move forward and back as they roll on their fullerene "wheels". The nanocar is able to roll about because the fullerene wheel is fitted to the alkyne "axle" through a carbon-carbon single bond. The hydrogen on the neighboring carbon is no great obstacle to free rotation. When the temperature is high enough, the four carbon-carbon bonds rotate and the car rolls about. Occasionally the direction of movement changes as the molecule pivots. The rolling action was confirmed by Professor Kevin Kelly, also at Rice, by pulling the molecule with the tip of the STM.

The concept of a nanocar built out of molecular "tinkertoys" was first hypothesized at the Fifth Foresight Conference on Molecular Nanotechnology (November 1997). Subsequently, an expanded version was published in Annals of Improbable Research. These papers supposed to be a not-so-serious contribution to a fundamental debate on the limits of bottom-up Drexlerian nanotechnology and conceptual limits of how far mechanistic analogies advanced by Eric Drexler could be carried out. The important feature of this nanocar concept was the fact that all molecular component tinkertoys were known and synthetized molecules (alas, some very exotic and only recently discovered, e.g. staffanes, and notably – ferric wheel, 1995), in contrast to some Drexlerian diamondoid structures that were only postulated and never synthesized; and the drive system that was embedded in a ferric wheel and driven by inhomogeneous or time-dependent magnetic field of a substrate – an "engine in a wheel" concept. 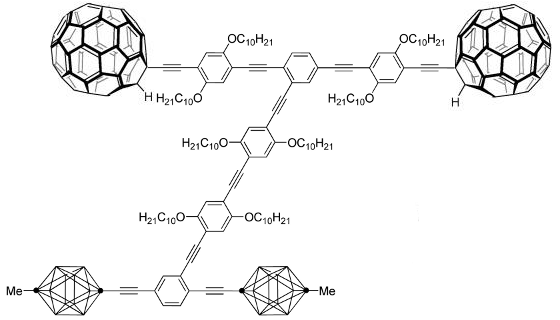 The Nanodragster, dubbed the world's smallest hot rod, is a molecular nanocar.