Muhammad VIII al-Amin known as Lamine Bey ( ar|الأمين باي بن محمد الحبيب ; 4 September 1881 – 30 September 1962), was the last Bey of Tunis (15 May 1943 – 20 March 1956), and also the only King of Tunisia (20 March 1956 – 25 July 1957). He was enthroned in unusual circumstances following the removal of his predecessor Muhammad VII al Munsif by the French Resident General Henri Giraud in 1943. It was not until the latter's death in 1948 that his legitimacy was recognised by the people of Tunisia. He took steps to align himself with the Tunisian national movement against the French protectorate but was sidelined by the Neo Destour after he accepted French-initiated reforms in 1954. Shortly after independence Lamine Bey was turned out of his palace along with his family. Their property was seized and several family members were imprisoned. He ended his days living in a small apartment in Tunis.

On 19 June 1942 Ahmed II died and was succeeded by Muhammad VII (also known as Moncef Bey). In accordance with tradition on 25 June Moncef Bey named Lamine Bey Bey al-Mahalla, or heir apparent, decorated him with the Ahd El-Amane and made him a Divisional General. A month later he had an opportunity to display his loyalty to his sovereign when he was contacted by one of the court counsellors, General M'hammed Belkhodja. Belkhodja, fearing for his own political future, was trying to persuade the French Resident General Jean-Pierre Esteva to depose Moncef Bey. Lamine Bey however warned the ruler of this conspiracy and Belkhodja was expelled from the palace on 30 July. 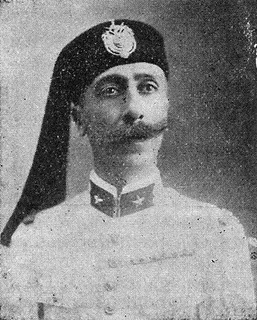 Towards the end of the Tunisian Campaign in May 1943 General Alphonse Juin, Commander in Chief of French forces in North Africa, arrived in Tunis with orders to depose Muhammad VII for alleged attempts to collaborate with Axis forces during the occupation and for an indulgent attitude to the actions of the militant nationalist Destour party. After investigating the Bey's conduct, Juin could find no grounds for condemning him, but his orders were explicit. He tried to persuade Moncef to abdicate, but he refused. Juin therefore visited Lamine in his villa in La Marsa to make sure that he would not refuse the throne if it was offered, but Lamine at first refused to give this undertaking. Eventually Juin prevailed on him to agree, largely because of the benefits to his family. As Moncef Bey refused to abdicate, General Giraud removed him on 14 May 1943. Muhammad VIII was installed on 15 May 1943 at the Bardo palace by General Juin, who invested him at the same time with the Légion d'honneur. He then received the homage of other princes of the royal family, ministers, court officials and members of the consular corps. For this occasion he reinstated the kissing of the hand, which his predecessor had abolished. That same day, Mohamed Chenik presented the resignation of his government and was replaced by Slaheddine Baccouche. As was the norm under the French protectorate, the Bey was not consulted on the choice of ministers (the Chenik government appointed by Moncef Bey had been an exception to this rule). It was only on 6 July that Moncef Bey eventually abdicated, thereby rendering Lamine Bey's accession legitimate. For most Tunisians however, Lamine Bey was still considered to be a usurper.

Lamine Bey kept a low profile in the face of demands from loyalists for the return of Moncef Bey. His rare appearances showed that his subjects were indifferent to him, or indeed hostile. To rebuild his standing, he supported the teachers of the University of Ez-Zitouna who were striking in December 1943 and chose Neo Destourians as ministers. Nevertheless, the general opinion was that he wanted to abdicate and restore the throne to Moncef Bey. When these rumours were denied, his popularity fell again. On 7 May 1944 Charles de Gaulle visited Tunis on the first anniversary of its liberation from the Axis. Tunisians hoped that he would reverse the injustice of his old rival Giraud and restore Moncef Bey, but the Moncefists were disappointed in this hope. Instead De Gaulle presented Lamine Bey a Cross of Lorraine in gold, having learned that during the Axis occupation he used to listen secretly to De Gaulle's broadcasts from London. The Bey wore this on his uniform next to his decorations for a long time afterwards. Hostility towards the Bey showed no signs of decreasing. He was boycotted by the other Husainid princes when he went to the mosque for Eid al-Fitr. To raise his prestige, he was invited to Paris where he attended the military parades on 14 July 1945, standing next to De Gaulle. He then went on to visit Germany. For Tunisians however, he remained 'The Bey of the French'. In August 1946 when the capital was at a standstill during a general strike to protest the arrest of several nationalists, he feigned ill-health to cancel the ceremony of kissing hands which he was due to hold for Eid al-Fitr, but when he passed through the streets of Tunis in February 1947 on the Mawlid festival, he could readily see his subjects' indifference. The anniversary of his accession was regarded by shopkeepers as a good occasion to close their premises and put up portraits of his predecessor. People even spat on his car. His health deteriorated in the face of this hatred and in 1947 an x-ray revealed a lesion in his left lung. Dr. Mohamed Ben Salem (1915–2001), husband of his daughter Princess Zakia, became his doctor and later his political advisor as well. On 3 March 1947, the new French Resident General Jean Mons arrived in Tunis. The political situation had remained unchanged since the end of the war – the Destour and Neo Destour could agree on nothing except the demand to remove Lamine Bey and reinstate his predecessor. The court was consumed by a morbid obsession with his restoration. Indeed, the mood was so pervasive that Mons suggested to the French government that they proceed to restore Moncef Bey. Prime Minister Paul Ramadier refused, fearing the adverse reaction of French settlers in North Africa. On 19 July 1947 a new Grand Vizier, Mustapha Kaak, was appointed by the Resident General. For the first time, there was parity between Tunisians and French in the government. Moncef Bey died in exile on 1 September 1948. His remains were brought to Tunis on 5 September for burial, and thousands of Tunisians turned out to pay their respects to him. His family threatened to boycott the ceremony if Lamine Bey attended, and he made no effort to present his condolences to them. However this was a turning point for his reign, as the possibility of Moncef Bey's restoration was now removed, and for the first time, his people began to regard him as their legitimate ruler.

Closer relations with the nationalist movement (1948–53)

After the death of Moncef Bey, relations between Lamine Bey and the nationalists improved. The Bey worked clandestinely with Habib Bourguiba and Salah Ben Youssef to raise demands for Tunisian self-government and during the period 1948–1951 was able to put the French authorities under considerable pressure. In 1952 a new Resident General took office, Jean de Hauteclocque, who took a much harder line than his predecessor and imprisoned Bourguiba and other nationalist leaders. The Bey sent an angry telegram to President Vincent Auriol complaining of De Hauteclocque's discourteous and threatening tone. The only result was that within a few hours, every one of his ministers had been arrested and interned. Deprived of the support of his ministers, on 28 March the Bey eventually gave way and signed the decree naming De Hauteclocque's nominee Slaheddine Baccouche as his Grand Vizier. However he refused to sign any decrees issued by the Baccouche cabinet or by the Resident General, bringing government to a standstill and producing deadlock. With all his ministers and advisers in prison, Lamine Bey relied on the counsel and support of the trade union leader Farhat Hached, but in December 1952 he was assassinated by extremist French settlers of La Main Rouge. Unable to resist de Hauteclocque any longer, Lamine Bey eventually signed the decrees on limited internal autonomy which had been formulated months previously in Paris, thereby allowing new municipal elections. However the reforms imposed by the French remained a dead letter – the nationalists launched a campaign of terror against both candidates and voters. This extended as far as the ruling family itself – on 1 July 1953 the Bey's heir apparent Azzedine Bey was assassinated inside his own palace, accused of conducting discussions of his own with the Resident General. On 2 September 1953, Jean de Hauteclocque was finally recalled to Paris and the new Resident General, Pierre Voizard took a more conciliatory line. Thousands of prisoners were freed and censorship was scaled back. However Voizard's instructions from the French government made the relative calm only temporary – he was to pursue a reform policy with the Bey only, but not with the Neo Destour. France hoped by this means to drive a wedge between the ruler and the militant nationalists. Lamine Bey was too wily to be deceived by the apparently pleasant demeanour of the new Resident General. On 16 October 1953 he refused to preside at the opening of the Tunis-Carthage Fair because some repressive measures were still in place. More efforts were made to appease him – on 1 January 1954 a number of nationalist leaders were freed and promptly received by the Bey. Bourguiba however, regarded by France as highly dangerous, remained confined on La Galite.

Estrangement from the nationalist movement (1953–56)

The French protectorate in Tunisia officially ended on 20 March 1956. On the same day, the Kingdom of Tunisia was proclaimed and the Bey was proclaimed King of Tunisia. His reign, however, was to be short-lived. The 1956 Tunisian Constituent Assembly election saw a landslide victory for the National Union (an alliance between Neo Destour, the Tunisian General Labour Union, the National Union of Tunisian Farmers and the Tunisian Union of Craftsmen and Merchants) which won all 98 seats. Following the election, Muhammad VIII dismissed Prime Minister Tahar Ben Ammar and appointed Bourguiba as new head of government. The Constituent Assembly held its formal opening ceremony on 8 April 1956. It was a sign of the changing times that the King presided over the session dressed in the uniform of a marshal of the Ottoman Empire, whose subject he had been when he was born, but which had ceased to exist in 1922. He expected to be present during the debates leading to the election of a speaker of the Assembly, and Tahar Ben Ammar had to intervene to persuade him to leave. The King withdrew with ill grace. Muhammad VIII and Prime Minister Habib Bourguiba On 31 May a decree from the Constituent Assembly abolished all privileges, exemptions and immunities which had previously been accorded to the ruling family. They were now simply ordinary citizens. Although this abruptly ended the civil list payments to members of his family and placed the crown estate under government control, the King signed the decree without protest. Another decree on 21 June modified the national emblems and removed any reference to the Husainid dynasty; another still, on 31 August, removed the King's prerogative to pass regulations, transferring this to the Prime Minister. Further decrees followed, compelling the King to turn over various properties to the state, against the backdrop of a hostile press campaign highlighting the questionable, and perhaps even criminal, circumstances under which they had been acquired. These measures served to greatly reduce the remaining prestige of the King.