Mountain warfare refers to warfare in the mountains or similarly rough terrain. This type of warfare is also called Alpine warfare, after the Alps mountains. Mountain warfare is one of the most dangerous types of combat as it involves surviving not only combat with the enemy but also the extreme weather and dangerous terrain. Mountain ranges are of strategic importance since they often act as a natural border, and may also be the origin of a water source (e.g. Golan Heights – ''water conflict''). Attacking a prepared enemy position in mountain terrain requires a greater ratio of attacking soldiers to defending soldiers than a war conducted on level ground. Mountains at any time of year are dangerous – lightning, strong gusts of wind, rock falls, avalanche, snow pack, ice, extreme cold, glaciers with their crevasses and the general uneven terrain and the slow pace of troop and material movement are all additional threats to combatants. Movement, reinforcements, and medical evacuation up and down steep slopes and areas where even pack animals cannot reach involves an enormous exertion of energy.

The term mountain warfare is said to have come about in the Middle Ages after the monarchies of Europe found it difficult to fight the Swiss armies in the Alps because the Swiss were able to fight in smaller units and took vantage points against a huge unmaneuverable army. Similar styles of attack and defence were later employed by guerrillas, partisans and irregulars who hid in the mountains after an attack, making it challenging for an army of regulars to fight back. In Bonaparte's Italian campaign, and the 1809 rebellion in Tyrol, mountain warfare played a large role. Another example of mountain warfare was the Crossing of the Andes carried out by the Argentinean Army of the Andes ( es|Ejército de los Andes) commanded by General José de San Martín in 1817. One of the divisions surpassed 5000 m in height.

In 218 BC (DXXXVI a.u.c.) the Carthaginian army commander Hannibal marched troops, cavalry and African elephants across the Alps in an effort to conquer Rome by approaching it from north of the Italian peninsula. The Roman government was complacent because the Alps were apparently a secure natural obstacle to would-be invaders. In December 218 BC the Carthaginian forces defeated Roman troops, in the north, with the use of elephants. Many elephants did not survive the cold weather and disease that was typical of the European climate. Hannibal's army fought Roman troops in Italy for 15 years but failed to conquer Rome. Carthage was ultimately defeated by Roman general Scipio Africanus at Zama in north Africa in 202 BC (DLII a.u.c.).

and Asiago offensive. In blue, initial Italian conquests.]] Mountain warfare came to the fore once again during World War I, when some of the nations involved in the war had mountain divisions that had hitherto not been tested. The Austro-Hungarian defence repelled Italian attacks as they took advantage of the mostly mountainous terrain in the Julian Alps and the Dolomites, where frostbite and avalanches proved deadlier than bullets. During the summer of 1918, the Battle of San Matteo took place on the Italian front; this battle was fought at the highest elevation of any in the war. In December 1914, another offensive was launched by the Turkish supreme commander Enver Pasha with 95,000–190,000 troops against the Russians in the Caucasus. Insisting on a frontal attack against Russian positions in the mountains in the heart of winter, the end result was devastating and Enver lost 86% of his forces. The Italian Campaign in World War II, Siachen conflict were also large-scale mountain warfare examples.

Since the Partition of India in 1947, India and Pakistan have been in conflict over the Kashmir region. They have fought two wars and numerous additional skirmishes or border conflicts in the region. Kashmir is located in the Himalayas, the highest mountain range in the world. The first hostilities between the two nations, in the Indo-Pakistani War of 1947, showed that both were ill-equipped to fight in biting cold, let alone at the highest altitudes in the world. During the Sino-Indian War of 1962, hostilities broke out between India and China in the same area. The subsequent Indo-Pakistani War of 1965 between India and Pakistan was mainly fought in Kashmir's valleys rather than the mountains themselves, although several mountain battles took place. In the Kargil War (1999) Indian forces sought to flush out opponents who had captured high mountain posts. The proxy warfare in 1999 was the only modern war that was fought exclusively on mountains. Following the Kargil War, the Indian Army implemented specialist training on artillery use in the mountains, where ballistic projectiles have different characteristics than at sea level.

Most of the Falklands War took place on hills in semi-Arctic conditions on the Falkland Islands. However, during the opening stage of the war, there was military action on the bleak mountainous island of South Georgia, when a British expedition sought to eject occupying Argentine forces. South Georgia is a periantarctic island, and the conflict took place during the southern winter, so Alpine conditions prevailed almost down to sea level. The operation (codenamed Operation Paraquet) was unusual, in that it combined aspects of long-range amphibious warfare, arctic warfare and mountain warfare. It involved several ships, special forces troops and helicopters.

Throughout history but especially since 1979, many mountain warfare operations have taken place throughout Afghanistan. Since the coalition invasion of Afghanistan in 2001 these have been primarily in the eastern provinces of Kunar and Nuristan. Kunar and eastern Nuristan are strategic terrain. The area constitutes a major infiltration route into Afghanistan, and insurgents can enter these provinces from any number of places along the Pakistani border to gain access to a vast network of river valleys. In this part of Afghanistan (Regional Command East), the US military has adopted a hybrid style of mountain warfare incorporating counterinsurgency (COIN) theory in which the population is paramount as the center of gravity in the fight. In counterinsurgency, seizing and holding territory is less important than avoiding civilian casualties. The primary goal of counterinsurgency is to secure the backing of the populace and thereby to legitimize the government rather than focus on militarily defeating the insurgents. Counterinsurgency doctrine has proved difficult to implement in Kunar and Nuristan. In the sparsely-populated mountain regions of Eastern Afghanistan, strategists have argued for holding the high ground—a tenet of classical mountain warfare. The argument suggests that if the counterinsurgent does not deny the enemy the high ground, the insurgents will be able to attack at will. In the Kunar and Nuristan regions, US forces continue to pursue a hybrid style of counterinsurgency warfare, with its focus on winning hearts and minds, and mountain warfare, whereby the US forces seize and hold the high ground. 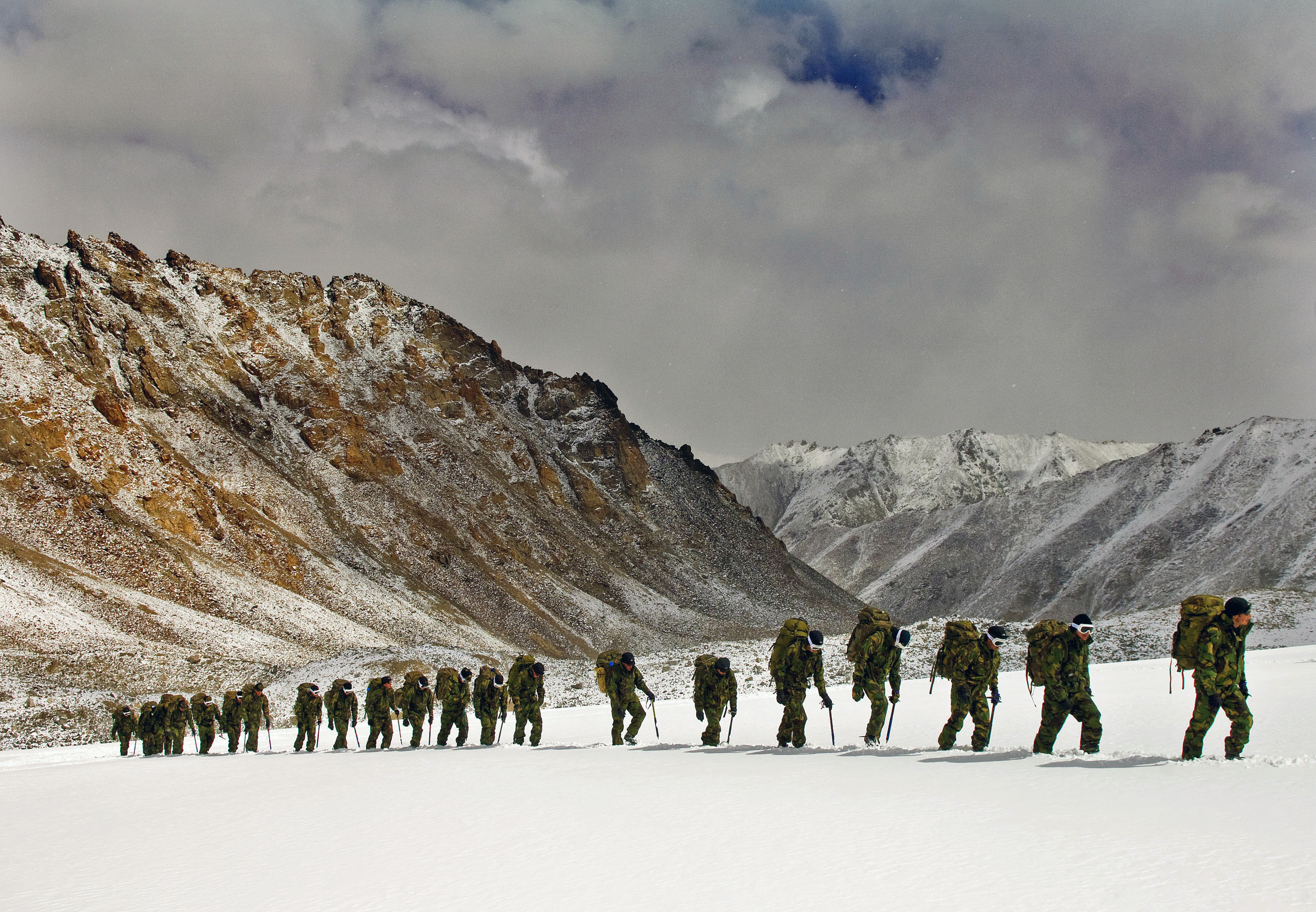 The expense of training mountain troops precludes them from being on the order of battle of most armies except those who reasonably expect to fight in such terrain. Mountain warfare training is arduous and in many countries is the exclusive preserve of elite units such as special forces or commandos, who as part of their remit should have the ability to fight in difficult terrain (e.g. the Royal Marines). Regular units may also occasionally undertake training of this nature.